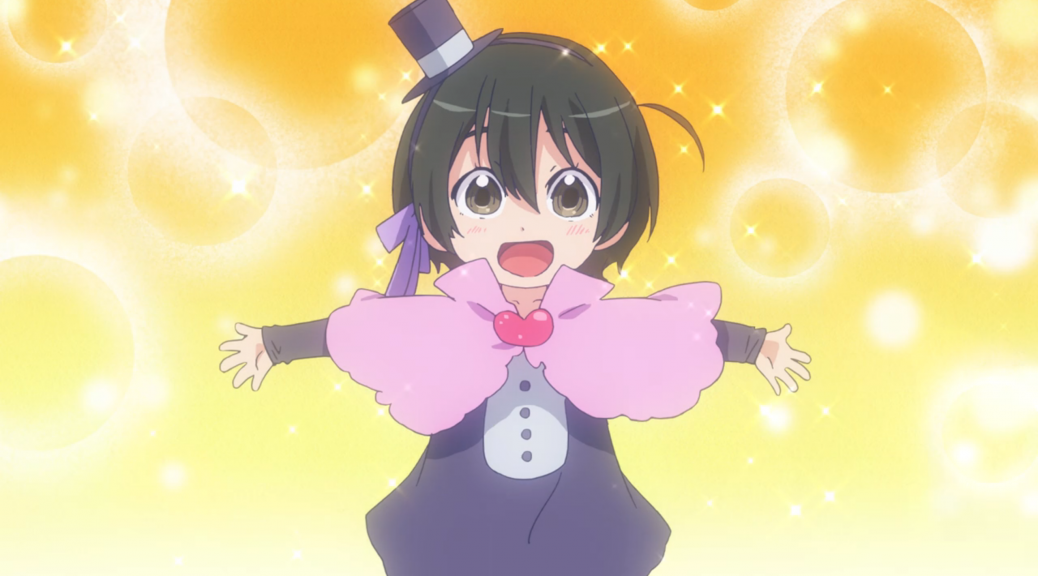 This is the kind of episode that’s tough to write about. Visually, it’s really appealing, with our girls and company decked out in gorgeous costumes, but not much really happens. Basically it’s an Amanchu! Halloween special, and while there’s nothing inherently wrong with that, it’s just not that interesting.

Oh, before I forget, TROLL FACE: 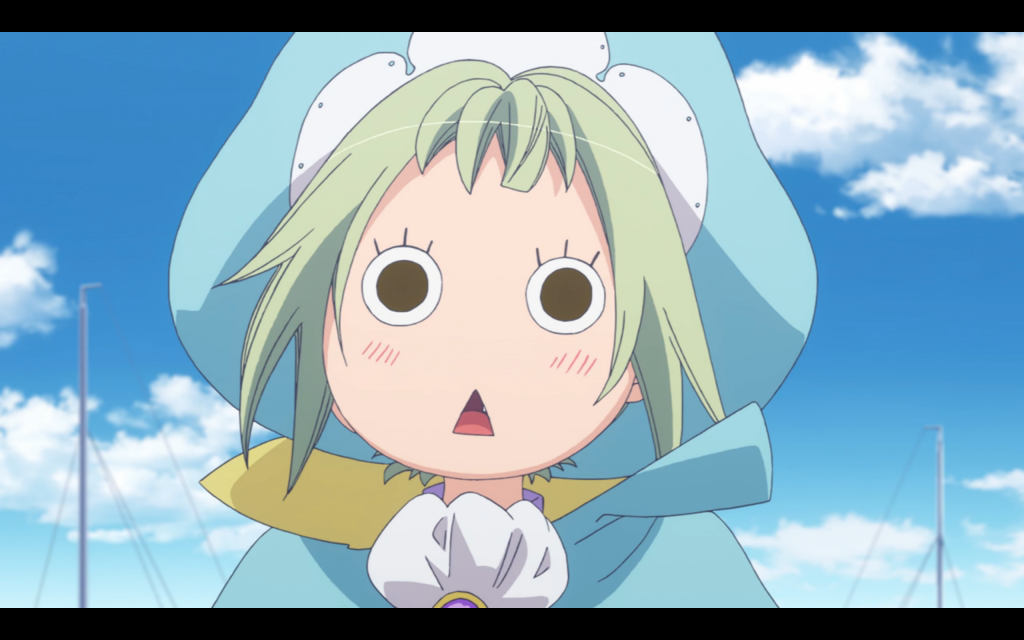 The only thing of note that happens is the meeting of Teko and Kokoro, Pikari’s younger friend. Teko’s jealous reactions to Kokoro are fun to watch, because she doesn’t go over the top; she still stays rather prim and hesitant, even while she’s stewing inside that Kokoro might have shared special experiences with Pikari that she doesn’t know about. It would have been easy to make Teko act extremely over-the-top jealous to go for the broad comedy of it, but I like the way they did it. 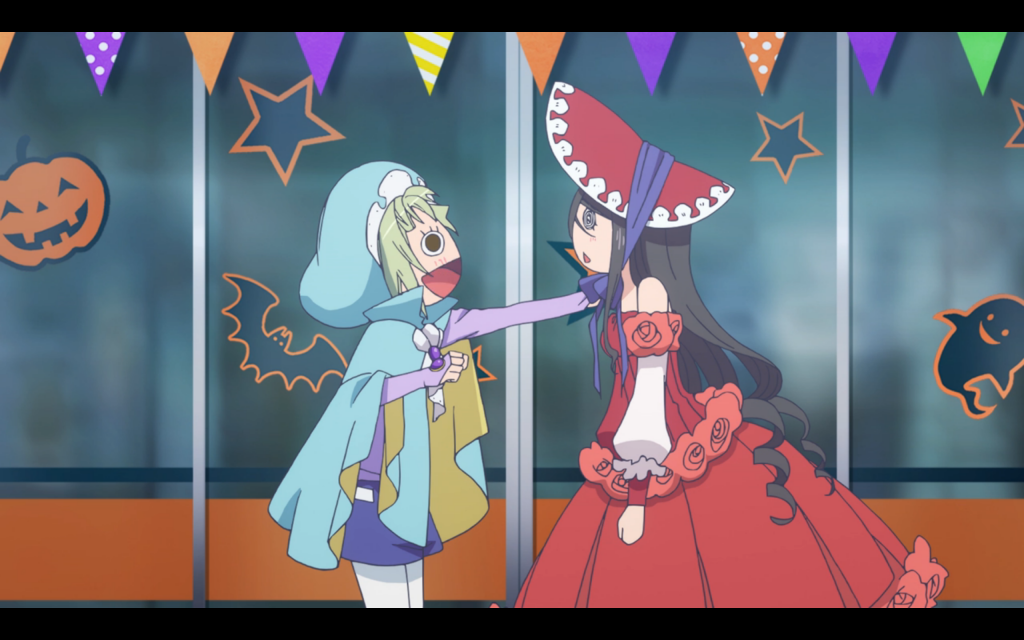 But then they do a scavenger hunt, and argh…I hate this kind of thing in real life, and it doesn’t seem much more fun in animated form. Going up to random people and asking them to give you stuff just seems incredibly awkward for everyone involved, and you just know people are sweating bullets in those costumes, and why would you even have a Halloween event that doesn’t feature candy at all?

The attempt at zany humor doesn’t really work for me here, and I was just hoping for it to end so we could move onto something more interesting. Katori-sensei threatened to reveal something interesting about herself, but in the end she just downed some beer and did nothing else of note. I’m really getting impatient for the show to start doing something with her, because you can just sense there’s an interesting backstory there somewhere. 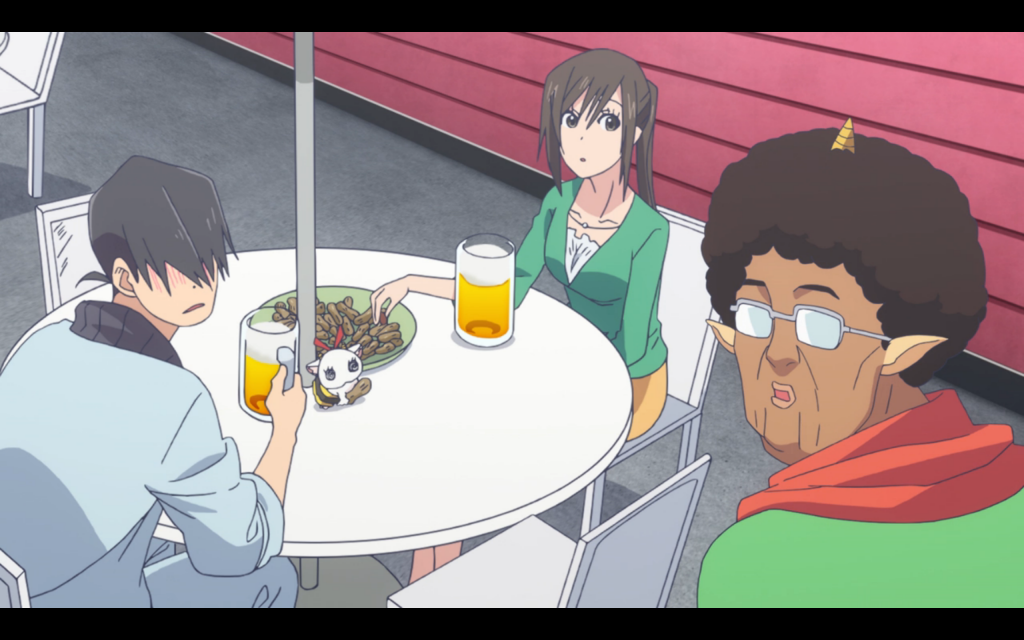 Does anyone remember this guy from season one? Apparently he’s the school principal, but I have no memory of him at all. This episode did remind me of the pets’ names (Admiral Cha and Ohime(above)), so it has that going for it.

I thought the lucid dreaming business from episode 4 was a one-time thing, but it comes back in a big way in this episode, with mixed results. The imagery of Teko and Pikari’s shared dream is beautiful, actually somewhat reminiscent of the Adolescence of Utena, but we’re left at the end wondering what, if anything, in this episode really happened. I think it’s just supposed to be the last sequence that was a dream (because if the whole episode was a dream, then Teko has still never met Kokoro, and that would be damn inconvenient), but I can’t really be sure. Considering how little I care though, this is not something that’s going to keep me up at night. 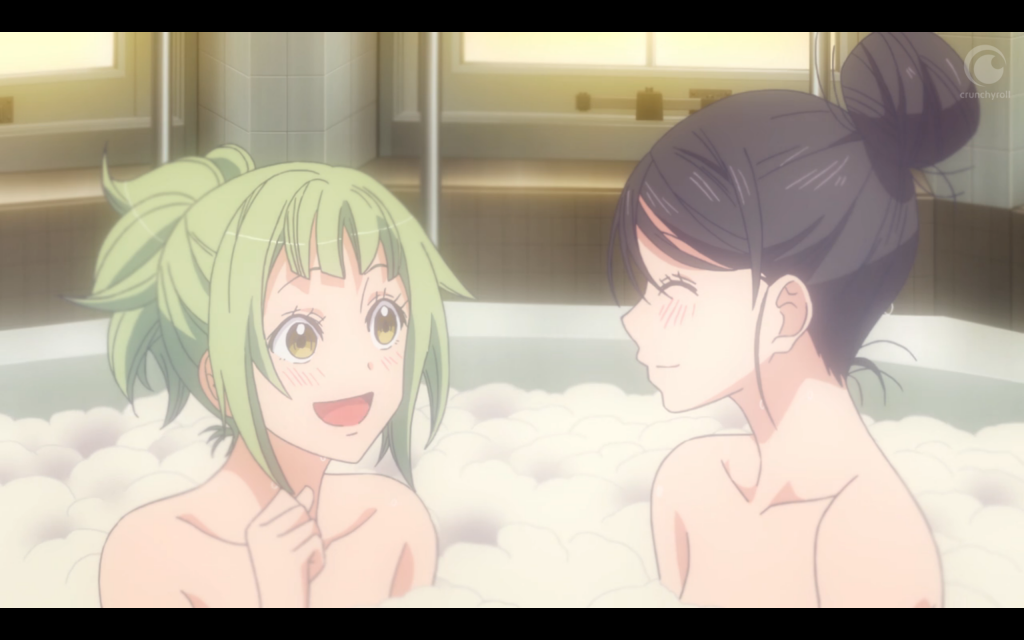 Oh my, it was all a dream! Or maybe only part of it was! Who even cares, naked girls at the spa!!!!

It probably sounds like I’m really down on this episode, but honestly, I don’t think it’s that bad; it’s just not what I want from this show, and not something I have a lot to say about. I feel pretty confident that the second half of the season will contain plenty of diving and meaningful character moments, so I hardly mind that they took an episode out to just have some fun; I do hope they’re done with this lucid dreaming business though, because that’s just out of place to me. Teko is not a “Professional Dreamer,” that’s not a thing.