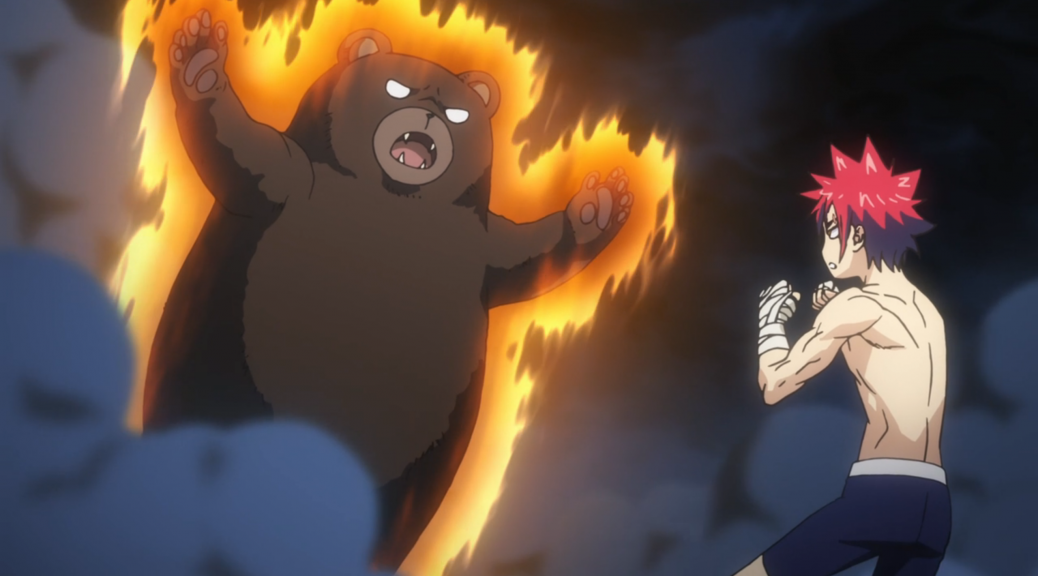 Once again, it’s just as well I’m doubling up on episodes here, because not a whole lot happens in 16 and 17. Soma’s match against Hayama is being really dragged out, which wouldn’t bother me so much were it not for the fact that every other cooking battle that’s meant to be going on simultaneously looks way more interesting. I mean, it looks like Nikumi is going to be facing off against the Pastry Loli from the Elite 10, how is she supposed to deal with that? Make an elegant wedding cake out of ground beef? I’m afraid we’ll never know.

I predicted that they would end up cooking bear meat in this arc, although I thought they would be a little further north first. In any case, Soma realizes that he knows nothing about bears, so he goes into the wilderness in hopes of meeting one…but doesn’t. Because the bear is onto him and his army of Kuga’s Chinese-food cooking slaves (don’t ask). Still, going into the bear’s habitat turns him onto something called schisandra berries, which end up being a good ingredient to use to temper the bear’s gamey flavor, so it was worth making an expedition out into the snow. 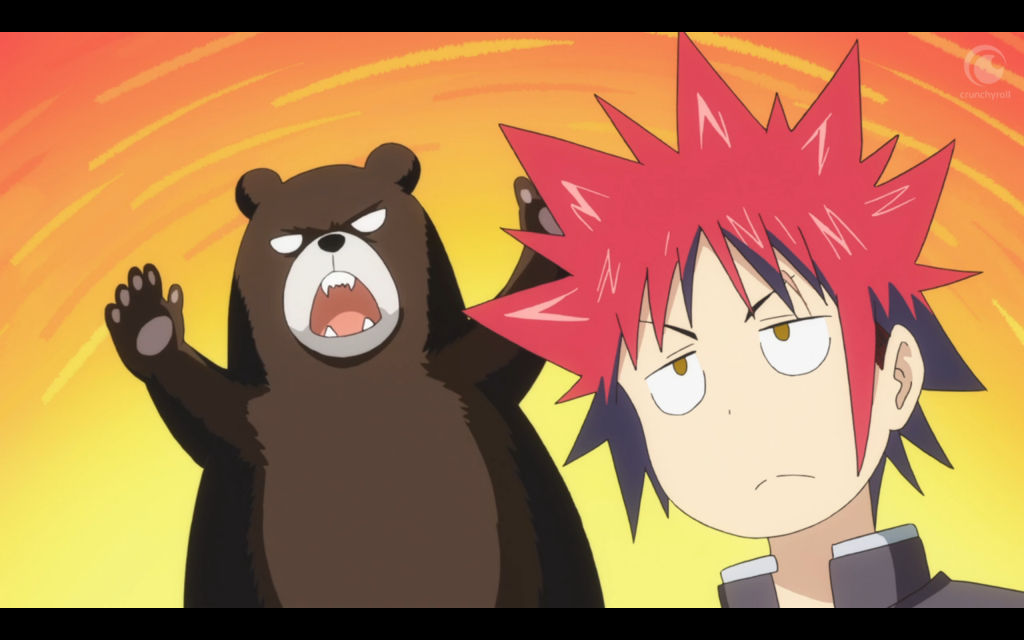 I was kind of hoping Soma would go out and butcher his own bear to show his commitment, but then we’d be getting into Golden Kamuy territory and I’d be grossed out again. It’s better this way….

Speaking of “gamey,” I realized during this episode that I have no idea what that means. I’ve never eaten wild game, and now that I’m on a plant-based diet, I probably never will. I can sort of imagine what I think gaminess might be like in flavor, but I have no way of knowing. When they cook on Food Wars!, I automatically imagine what the dishes might taste like in my head (doesn’t everybody?), but this time I can’t, and it’s kind of weird. Very weird, actually. I wonder what it would be like to watch this show if you were a vegetarian from birth and had never eaten any meat?

Anyway, we get a glimpse of Megumi and Takumi Aldini, and they’re going to be facing off against Rindou. Yaaaay! Finally! Except this episode is a big tease, and the scene cuts out before Rindou tells the pair what they’ll be cooking. *Shakes fist* Darnit, they better tell me what Rindou likes to cook in the next episode (Spoiler: THEY DON’T, IT’S AWFUL.) We do get a nice little scene of Rindou in the bath though, so I guess that was enough to stop her rabid fanbase from rioting. 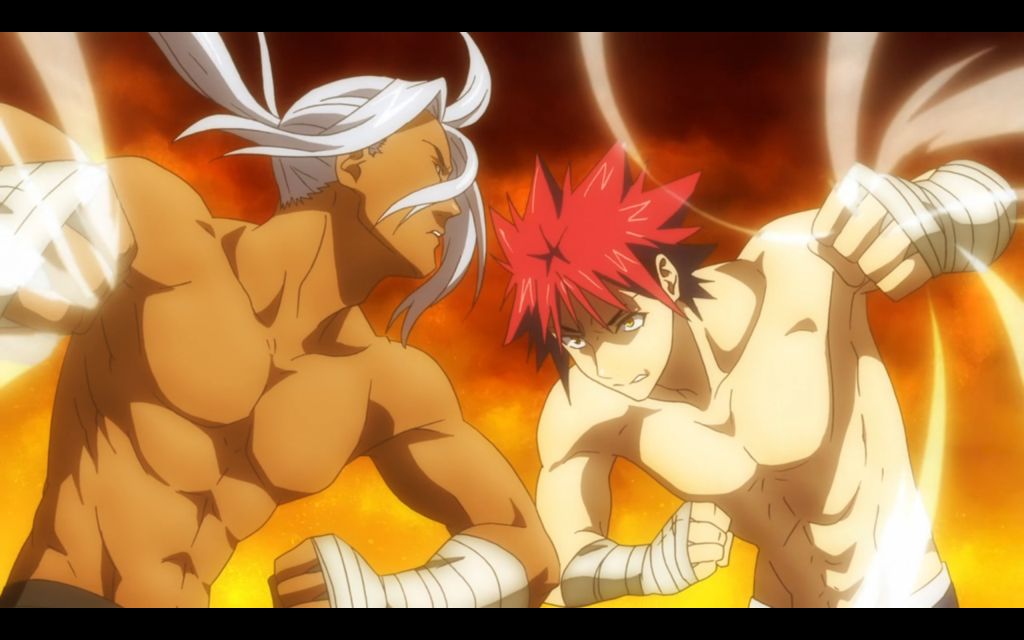 There is some quality manservice in this episode; don’t let anyone tell you that Food Wars! neglects the lady viewers. Okay, so the guys are rarely stripped completely naked by their foodgasms, but isn’t that splitting hairs a little?

Whenever this show tells us anything about Hayama, you may as well cancel your plans for the rest of the week, because it’s going to be awhile. Seriously, this episode delves deeply into why Hayama became a bad guy by joining the Azumi administration, which is totally unnecessary. I knew from the moment Hayama showed up that the reason he was teaming up with Central was to protect Jun, so watching that flashback play out was an exercise in tedium. For some reason, I just don’t care about Hayama that much, even though his total devotion to Jun should (in theory) make him a sympathetic character. I just don’t have much patience for arrogant, humorless types. 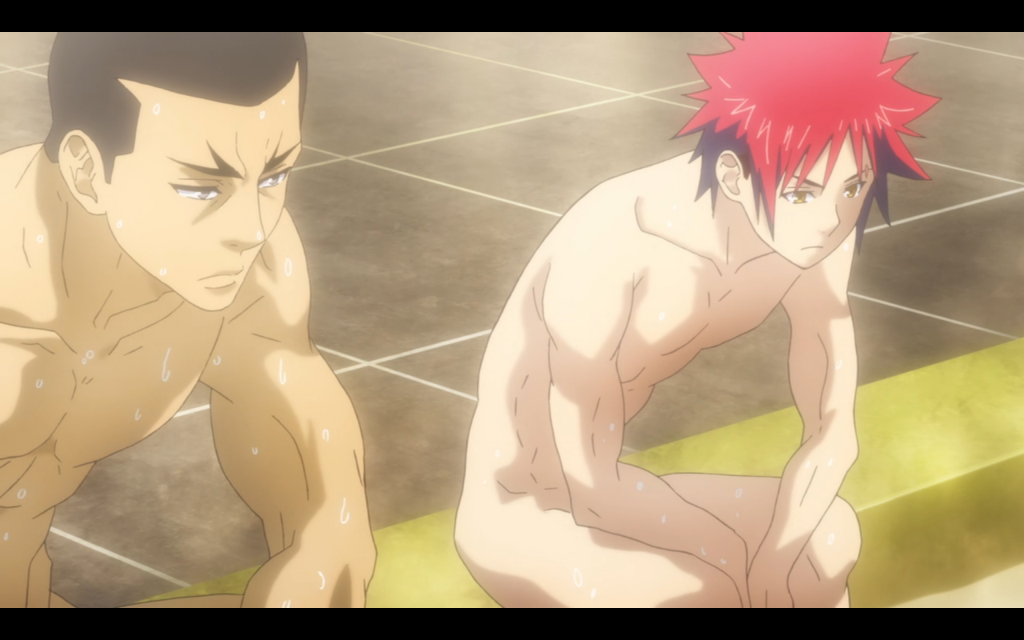 There isn’t much reason to post this, I just wanted to make sure you knew I wasn’t kidding about the Manservice stuff.

This episode introduces Alice’s father, so we’re getting more of the Nakiri family tree filled out. We’re also introduced to some sisters who are great food tasters because they’re super-smart, or something like that, but the real reason why they exist is so this can happen after they taste some bear-flavored cuisine: 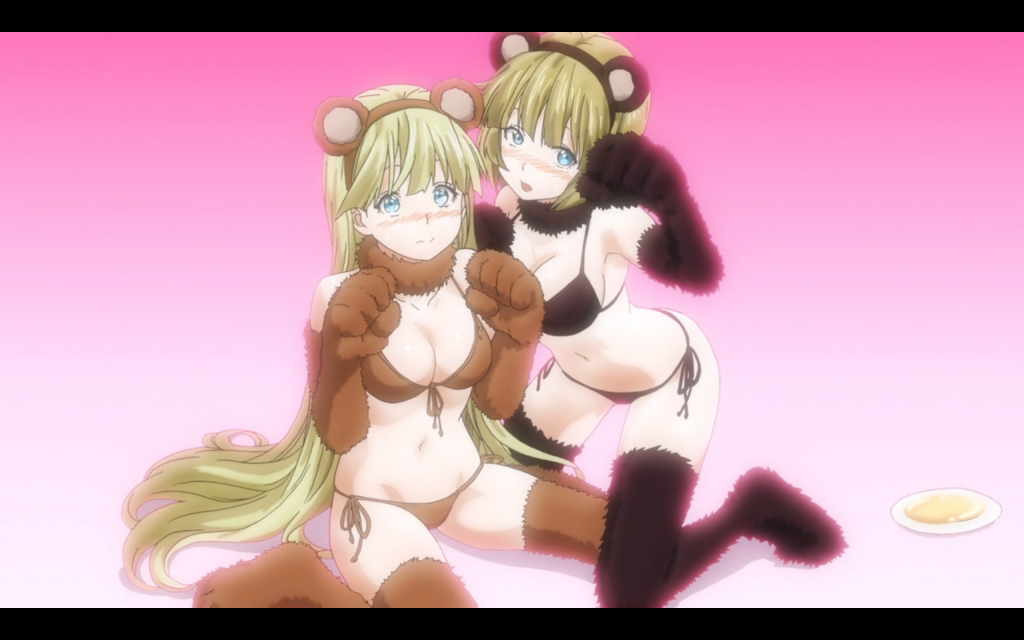 Everybody understands that the whole “impressing people with flavor is akin to sexual conquest” thing is a silly joke that nevertheless plays into this show’s theme of the true potential of cooking? I hope so, because it would be a bitch to explain it.

Both Hayama and Soma ultimately decide to fry the bear, which makes sense; deep frying is what people do on Chopped when they get a disgusting protein they have no idea what to do with, like lamb hearts or something. Soma makes a kind of meat croquette, which is interesting to me since that sort of thing is usually referred to as “Western” food in Japan, yet we don’t seem to have it in the US; I guess it comes from Europe, somewhere. His strategy was to make the bear taste as gamey as possible, so he could pass some sort of gaminess event-horizon and it would become delicious again, or something? I’m tired of this whole bear situation. Then the episode ends before Hayama can serve his dish, so we have to deal with this whole gaminess business for yet another episode. 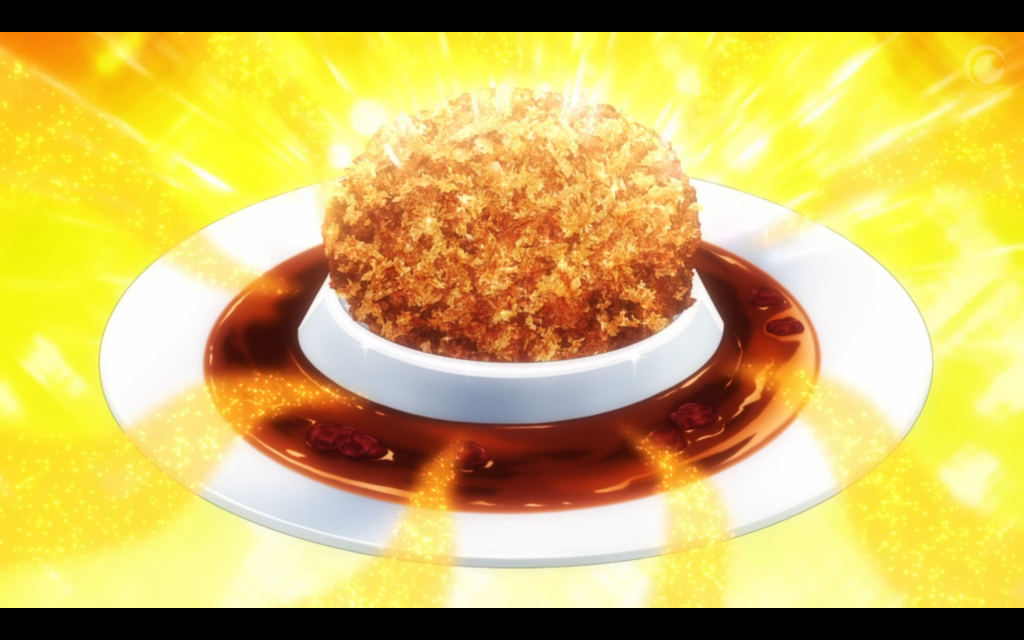 What I would like is for Hayama to screw up and overspice the bear to the point where it loses its distinctive flavor, and lose the match, but I doubt that’s going to happen. They’re making it seem like Hayama is pretty much unbeatable right now, yet Soma has to survive somehow, so there’s going to be some trickery. Maybe they’ll tie, or maybe Hayama will win but Alice’s Dad will lobby for Soma to pass on to the next round due to the fact that Soma’s dish made him bare his chest, and that’s serious business.

Heh, despite everything else, I love the fact that chest-bearing after eating a good meal is apparently a genetic trait in the Nakiri family; it’s a good thing Erina didn’t inherit that, otherwise things could get very awkward very fast. 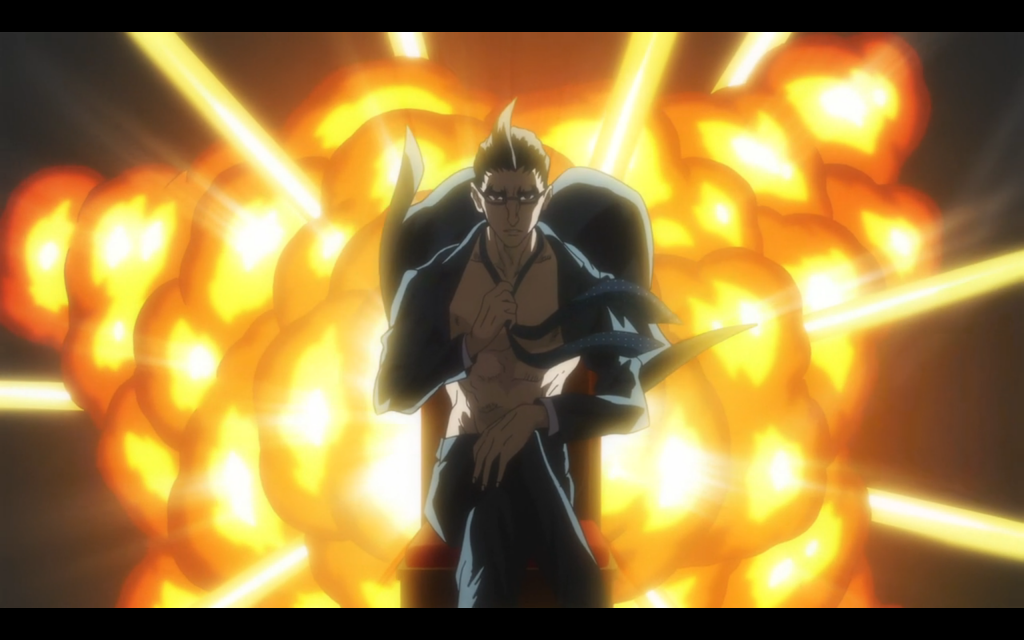 THE NAKIRI DYNASTY INCENDIARY STAMP OF APPROVAL; accept no substitues.

Next episode better focus on the Rindou match, and/or some of the other Polar Star kids battles, otherwise I’m going to be one pissed off little otaku. If they delay the reveal of what Rindou’s specialty is for even one more episode, I’m going to write J.C. Staff a very strongly-worded letter. They’ll probably be too busy working on 47 different anime series simultaneously to read it, but whatever; I gotta blow off steam somehow.