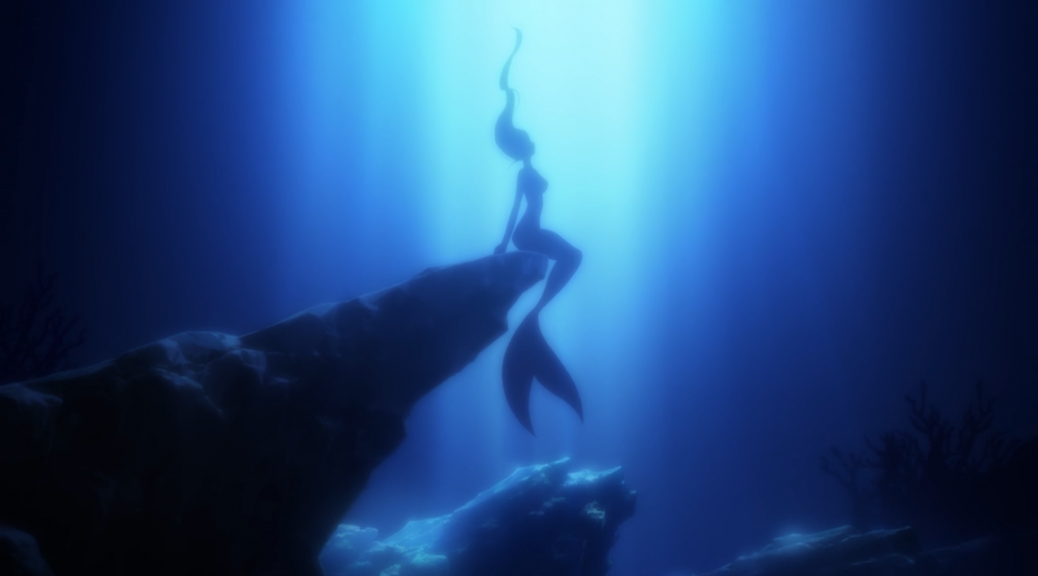 This show did one no-diving-at-all episode, and one episode jam packed full of diving, so it kind of evens out. You’d think I’d be complaining about the ocean-free episode, but this show has pretty much earned my eternal allegiance after Episode 3, so eh, I think I’m going to stop caring so much about how much time they spend underwater.

Oh, and here is your regularly scheduled Pikari Troll Face: You get +10 happiness points added to your happiness total for today! Go out and enjoy the sunshine, or whatever floats your boat! 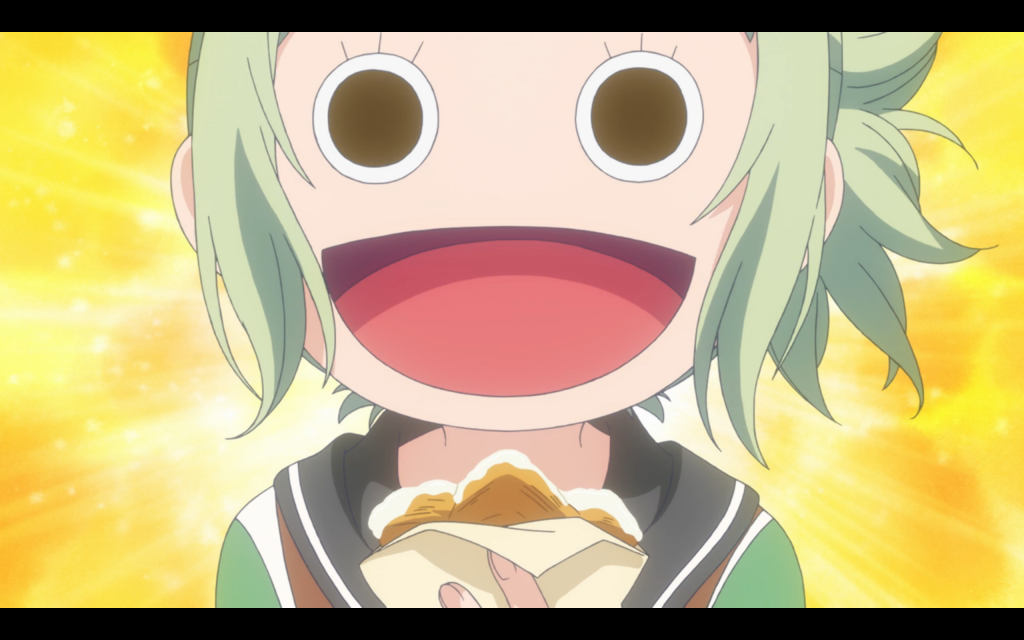 I try to take screenshots of her filling the screen in all her chibi glory, but sometimes she makes better faces when other characters are in the shot. What do you think; should I open up the Weekly Pikari Troll Face to other characters, or leave it as a solo act? I’m going to have to give this some serious thought.

Episode 4: And Now, For Something Completely Different 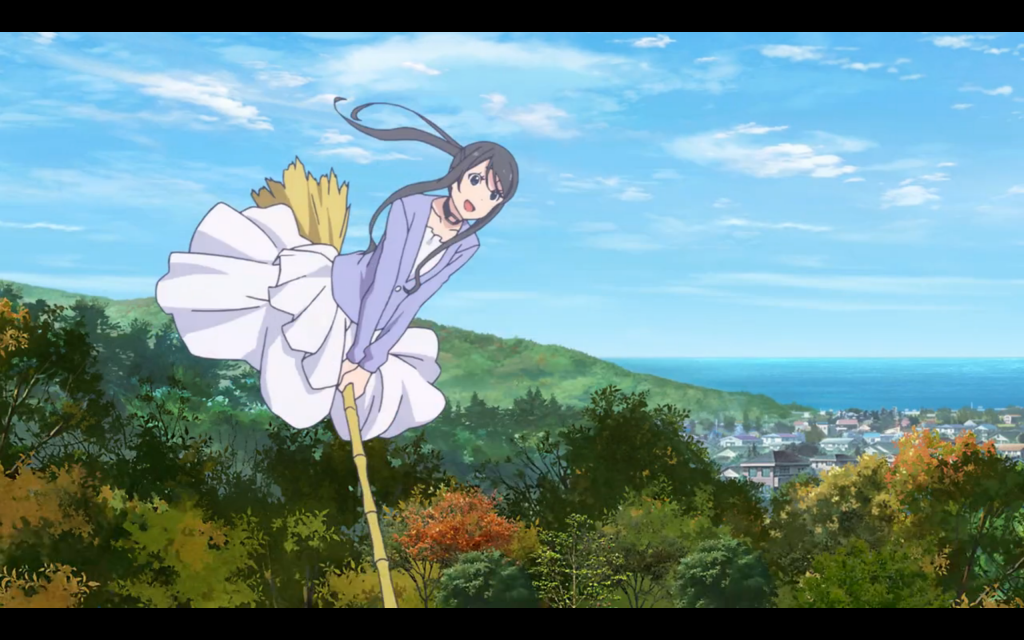 This time around, the staff of Amanchu decided they didn’t feel like making Amanchu that week and gave us an episode of Flying Witch instead, out of nowhere. Fortunately, I liked Flying Witch a lot, so I’m on board with this kind of rampant irresponsibility.

What’s interesting to me about this episode is that we’re used to seeing Pikari as the one who lives in the moment, something this episode focuses on a lot, and Teko as the one who gets distracted worrying about the future. This episode sees both girls living in the moment, with Teko indulging in a daydream that seems her flying all over town on a broom. Granted, Teko apparently needs to be unconscious to truly live in the moment, but well, that just shows that there’s still room for her to grow, right?

I’m not sure what to think about the whole lucid dreaming concept; I’ve read about it before, but it always seemed too good to be true to me. Usually at the point in my dream where I realize “this is a dream,” I wake up, so I can’t take advantage of the fact that I know I’m dreaming. In theory, you can train your mind to be able to consciously control your dreams, but I’m not sure that’s something you can learn; I think some people may have a different dreaming process to begin with. Giving Teko this ability seems a little random, but this episode is mostly an excuse to draw pretty girls flying on broomsticks and I’m thinking about it too hard.

Once again, notice that the girls are separated, with the boyish Kokoro taking Teko’s place as Pikari’s sidekick once again. I like the way they’re consistently showing how Teko’s life has changed as a result of Pikari, even when the two of them are physically separated.

Episode 5: I Was Sad I Almost Got Decompression Sickness, Then I Saw A Mermaid So it’s All Good 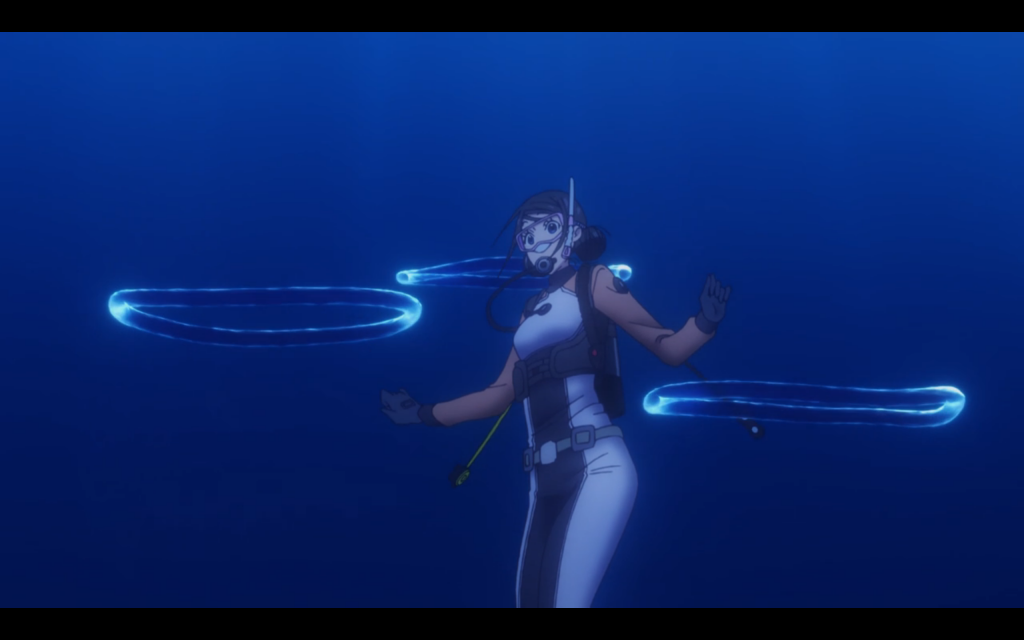 This was a great episode of anime, the kind of thing this show is uniquely equipped to deliver. Not only was the underwater scenery gorgeous, but the show didn’t let the pretty ocean visuals get in the way of giving the characters interesting things to do. It was also a little scary, since the problem Teko experiences here is exactly the reason why I’d be too afraid to go diving myself.

Still, even though the fact that she almost got decompression sickness is disturbing, the way Teko handles it is interesting. She does get upset with herself (as she should; it was a careless mistake that could have led to horrible consequences), but she doesn’t get so bogged down in self-doubt that it stops her from going in the water again. It seems like she’s really taking Katori’s message from episode 3 to heart; the fact that she panicked once and did something stupid, doesn’t cancel out all the times she could have panicked underwater and didn’t. Her mistake gives her pause, but it doesn’t devastate her the way it would have in the past. 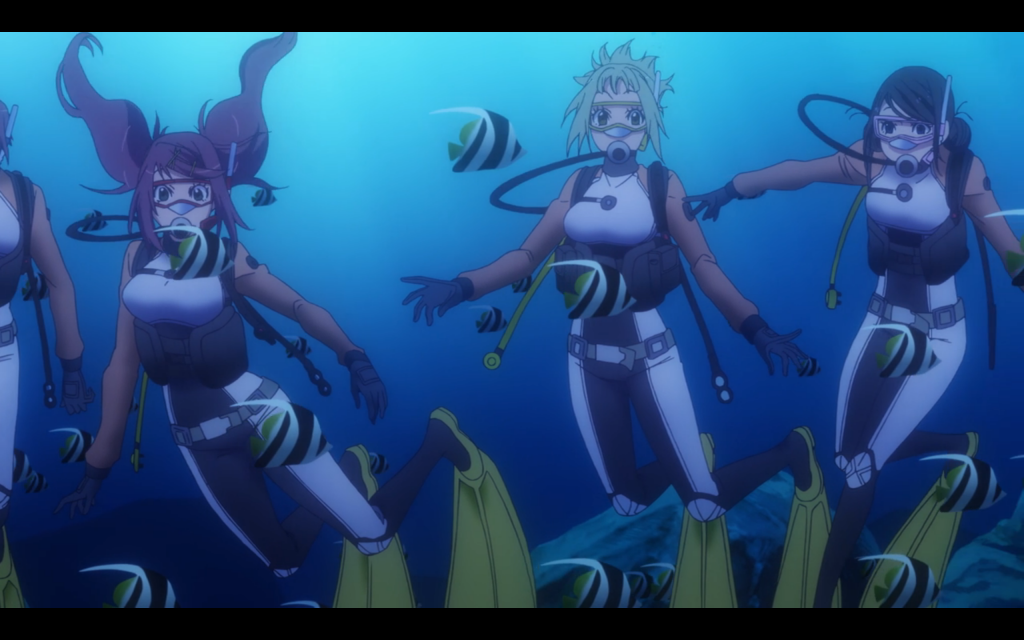 I had trouble finding screenshots from this episode that really captured how beautiful it all is; I think you really need to see it in motion, which is proof that the show is providing good animation, not just good art.

I have mixed feelings on the urban legend of the Jet Black Mermaid. At the beginning, I was really hoping that Katori-sensei was the mermaid herself, and was kind of slyly telling the girls about her own secret identity (maybe because I desperately want the show to give Katori more to do?), but obviously, that’s not how it turned out. The idea of the “mermaid” being Pikari’s portly grandfather is kind of charming, but also a little…err, I don’t know, strange? How is such a morbidly obese man such a good swimmer? How did the people who spread the legend of the ‘mermaid’ fail to realize that the mermaid in question was a 300 lb. man?

Maybe I shouldn’t be questioning the plausibility, since that’s kind of getting bogged down in minutia, but well…this is one show where the laws of physics and biology matter. Like, they really matter, to the point where they almost killed freakin’ Teko in this episode. It’s a little jarring that they’re presenting diving procedure and safety extremely seriously, and then introduce a character like Grandpa who doesn’t look like he should be able to get out from under his kotatsu, let alone be a fantastic diver. This show has always had really cartoony elements (Troll face, the pets, etc.), but this is the first time I felt like the cartoony bits kind of clashed with the impact of the underwater scenes. 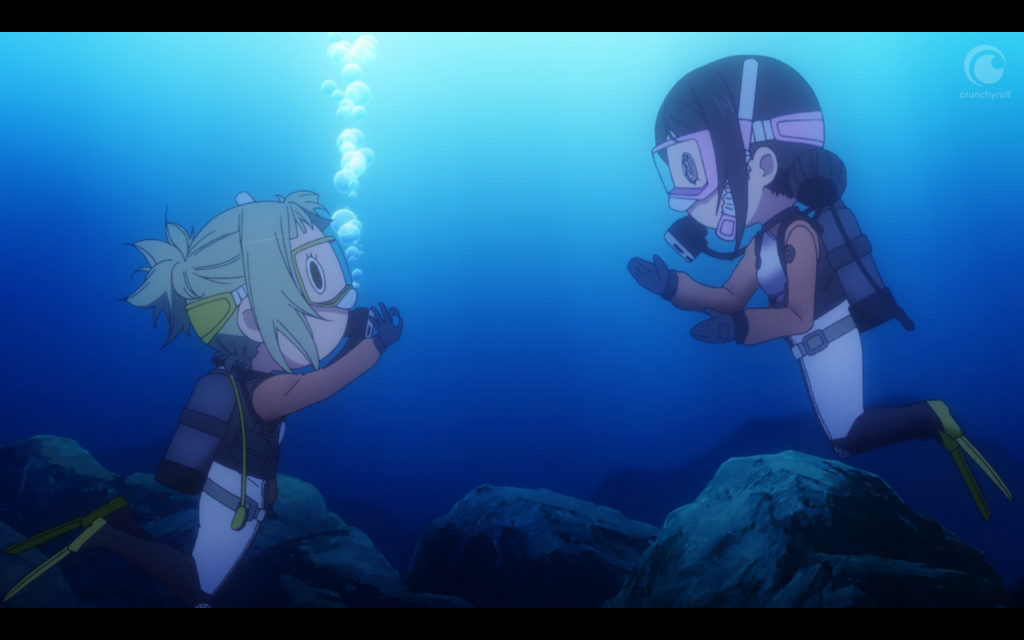 I was trying to find an Underwater Pikari Troll Face, and this was the best I could do. Finding a screen of Pikari making her special face while in full diving gear is now my mission in life.

Still, that’s a minor complaint about what was otherwise a pretty excellent 20 minutes of animation. I can’t wait to see Teko get her advanced license so the crew can explore even more interesting underwater locales.