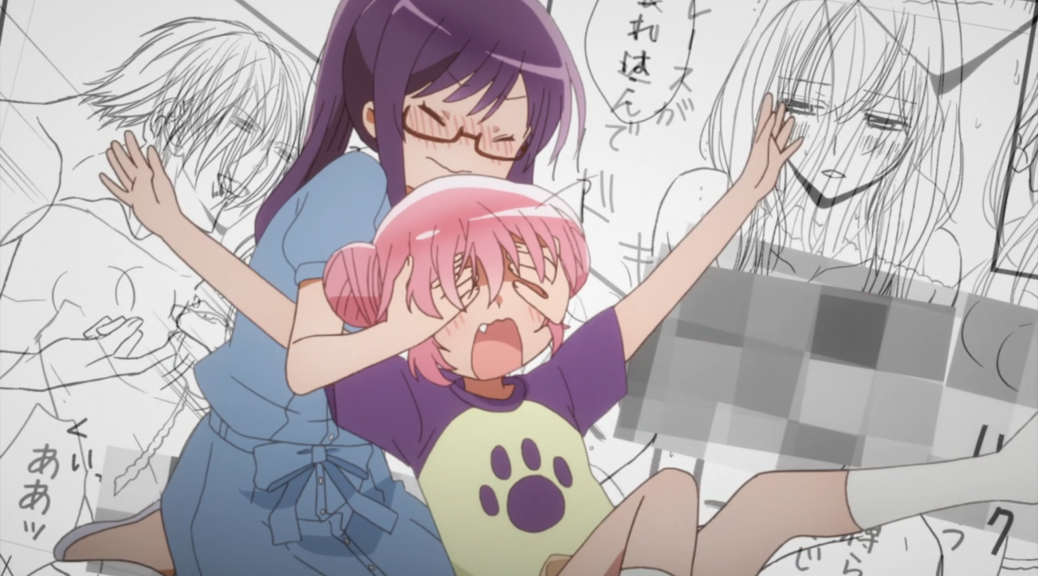 I had to take care of some real-life stuff, so I’m a little behind on anime. To catch up, I’m going to be doubling up on some of these episode posts– or maybe tripling up, if I get even further behind. Who knows what kind of wacky anime coverage you might find at Otakusphere? It’s part of the charm! Err, hopefully. 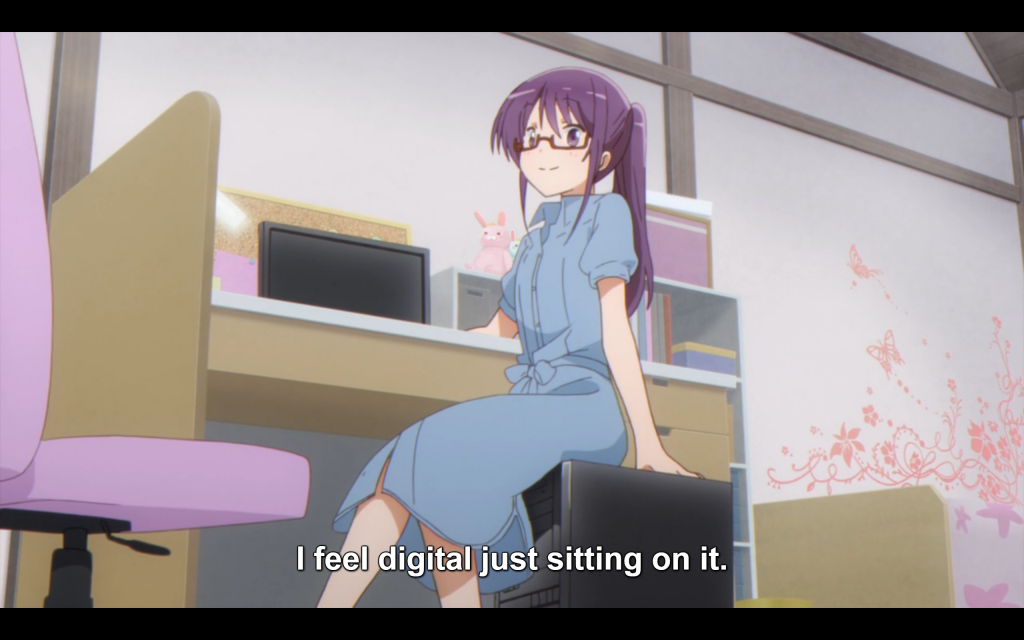 Me, getting ready to do some blogging. I think I might steal “I Feel Digital Just Sitting On It” as the title for a memoir.

Episode 4: Sex is Not So Bad 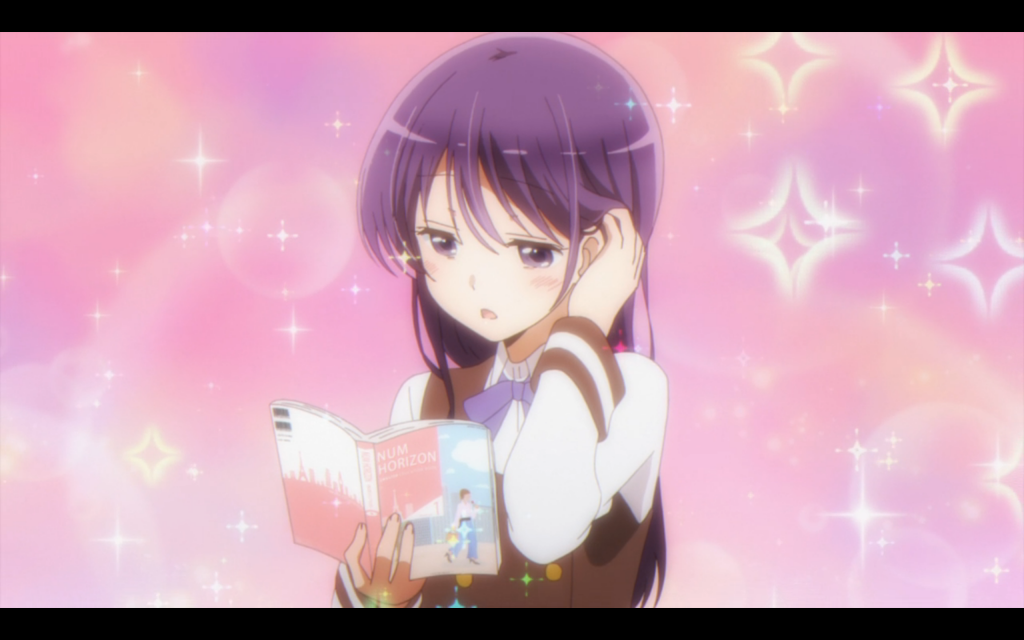 I like the ongoing joke that Ruki is inadvertently sexy, even when she’s being a total dork. It’s the rarely seen parallel to the trying-too-hard-to-be sexy character.

Anyway, back to the Manga Artist Dorm of Awesomeness. Ruki is running herself ragged trying to keep up with her manga and school, to the point where she’s staying up multiple nights in a row, and seeing that kind of behavior always makes me wince a bit. Ruki, my girl, I give you permission to skip school if you need more than one all-nighter to finish your manga, okay? Maybe I’m a bad influence, but I think school attendance becomes less important if you already have a job in the adult world. Besides, sleep is very important, people; I thought I was functioning on minimal sleep in college, but when I look at some of the dumbass choices I made back then, I wonder.

This is the first episode that really had a strong theme, that of Ruki getting over her issues with drawing lewd manga. I really liked this angle, since Ruki being dreadfully uncomfortable with the manga she’s drawing has been arguably more disturbing than humorous since the beginning. I like that when she gets out and meets her readers, they’re all totally normal women and girls from different walks of life, and there’s nothing unsavory about the experience; basically, this episode is a little paintbox full of sex positivity. Everyone has sexual fantasies, this is normal, and Ruki shouldn’t feel bad for drawing manga with sexual elements. 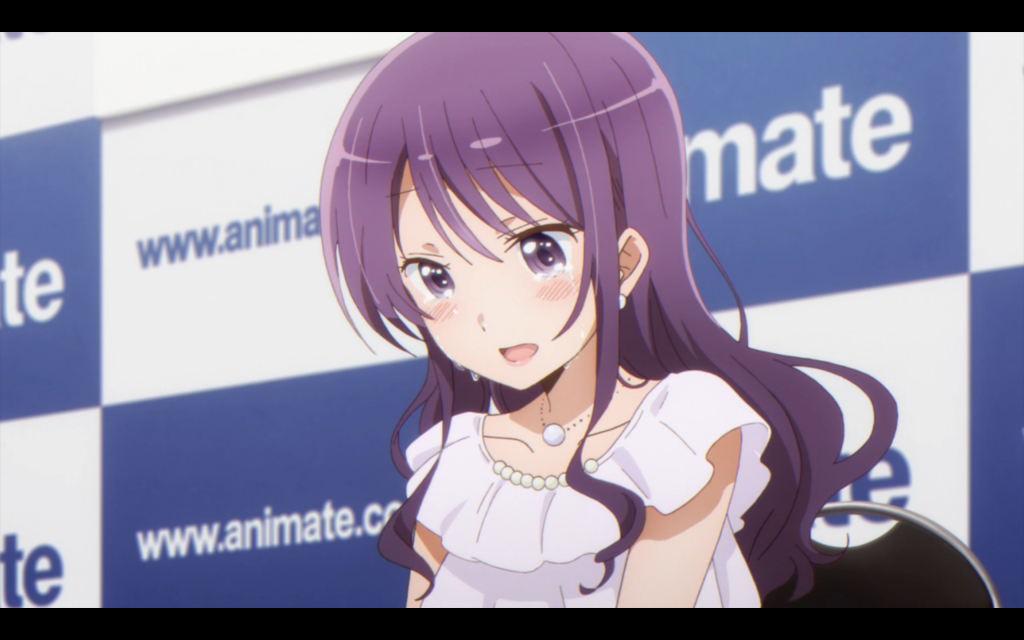 “Hello, ladies! I’m 14 and I’ve never even kissed a boy, but please come up to me and ask for advice on your marriage– It’s not like I’m going to make it any worse, right?”

Of course, the idea that a sheltered, 14-year-old girl can pull off the role of an experienced older sister-type at a public event, to an audience of people twice her age, isn’t really plausible. However, criticizing this kind of show for the characters being precocious is a little like watching a giant robot show and then complaining that the animators didn’t account for how the robot would be effected by air resistance; there are certain genre conventions that are at odds with reality, but we all knowingly accept them for the sake of entertainment. This story with Ruki would make more sense if she were 24 instead of 14 (or 34, God forbid!), but that’s true of a lot of anime characters in various genres.

I guess you could criticize storylines like this as part of a larger point about how Japanese pop culture is youth-obsessed, but A)that’s not just Japanese pop culture, that applies to INTERNATIONAL pop culture and B)I’ve always thought the reasons why younger characters tend to dominate entertainment were pretty intuitive. I may lament the lack of characters my age in anime sometimes, but I understand the reasons why they’re rare.

In any event, this episode really felt like Comic Girls finding a purpose beyond tepid cuteness, and I for one felt validated that I had a reason to be watching it in the first place. My taste, validated! Surely this won’t last…. 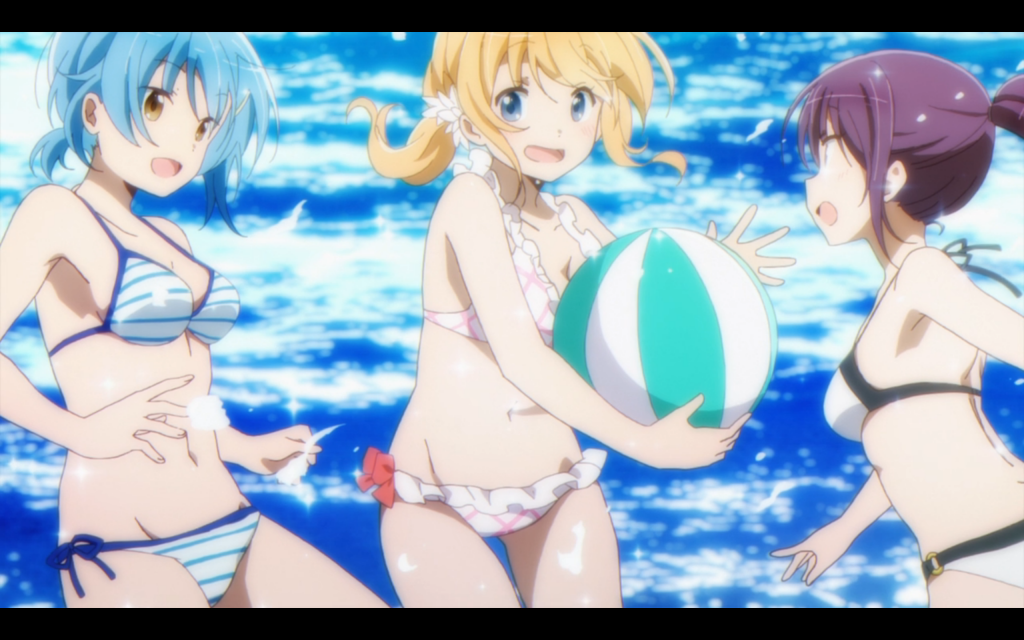 …and it’s a beach episode, goddamit.

Actually, it’s really not bad. I appreciate the fact that this episode only devoted half it’s runtime to the beach, and then moved onto other things. The girls all look lovely in their swimsuits if you’re into that sort of thing, and the show managed to remember that this show is about artistic girls, not just generic cute girls. I like the fact that three out of the four girls had to basically be dragged kicking and screaming to go swim in the ocean, since they preferred to sit on the beach and draw. I haven’t been to the beach in a long time, but when I did go, I was the girl who was sitting on the blanket drawing, so I relate to Kaos and co., as usual.

One minor note that perturbed me though; Can you really rent bathing suits at the beach these days? That seems really unsanitary, and given how cheaply you can buy a bathing suit if you want to, really unnecessary. I mean, I’m sure the rental place washes the suits between customers and stuff, but who wants to wear a bathing suit that ten other people have worn? It’s not like going skiing, where most people rent equipment so you don’t have to drop $1000 on your own set. I mean, I realize this is tangential to the episode and I really shouldn’t care, but I’m curious now.

After fun-in-the-sun hijinks, we get Koyume and Tsubasa going on a date with everyone else spying on them, as you do. What’s funny is that Koyume seems genuinely flummoxed that she knows that Tsu is a girl, but she’s attracted to her anyway. It’s called being a lesbian, Ko-chan; Kaos is also struggling with this crazy, obscure concept. Someone needs to sit these girls down and draw them a map, because this is getting embarrassing already. 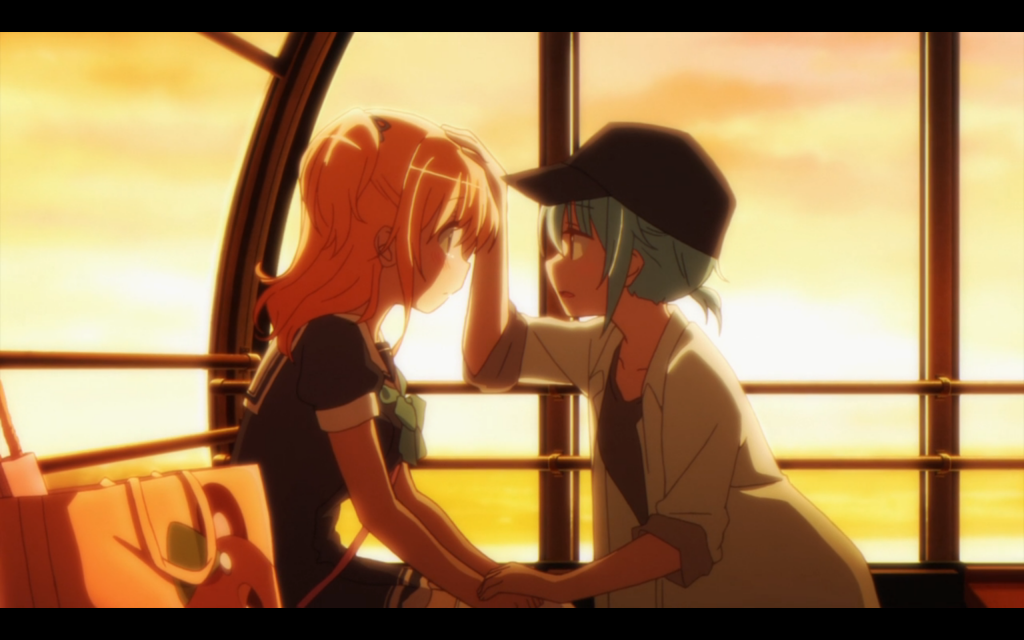 Let’s be honest, I would go on a date with Tsubasa too. Mostly to grill her for manga-drawing tips, but the point still stands.

I guess the date may be exciting for people who like girl-on-girl romance, but I don’t really care much for that sort of thing one way or the other. The part of this episode that resonated with me was Tsu telling Koyume that the most important part of drawing manga was to enjoy it, and not to obsess over professional achievement. It may be simple and it may be trite, but honestly, I don’t think it’s possible to tell an artistic person that too often. I wish I had a Tsu in my life to tell me that back when I really needed to hear it; my life might be very different today, if I had.

So after a rocky start, Comic Girls seems to be hitting it’s stride, not so much as a show about manga (although the manga element is always there), but more as a show about (unusually sheltered) teen girls trying to wrap their heads around sex and growing up. Even though I would personally prefer a show that went super-in depth into the manga-drawing process, this is probably a smarter direction for the show to go in general. 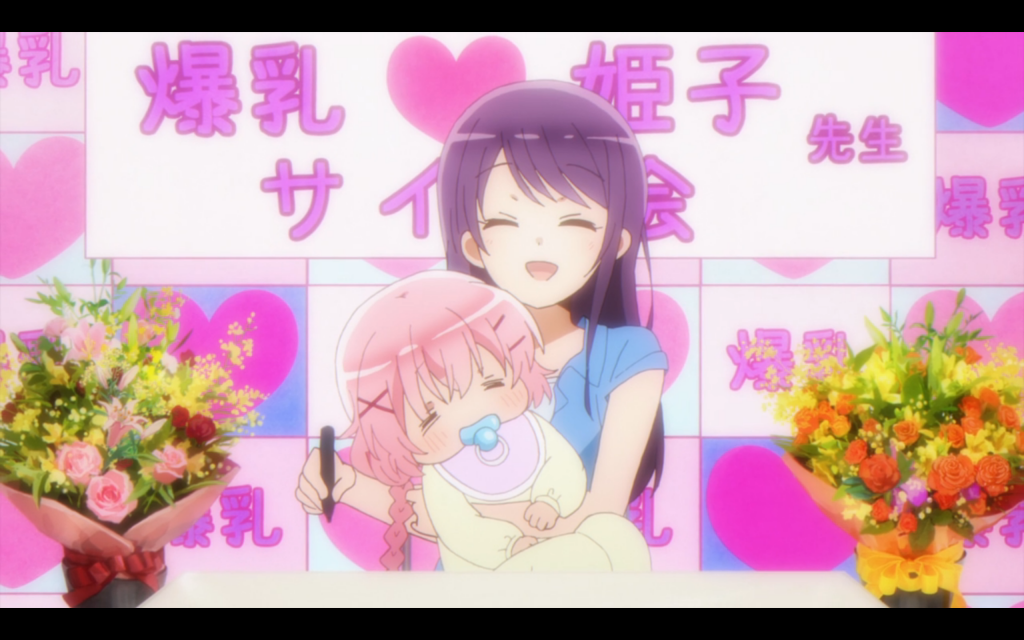 I hope at least a few people who aren’t watching the show read this post, so they can feast their eyes on this screenshot with no context at all.