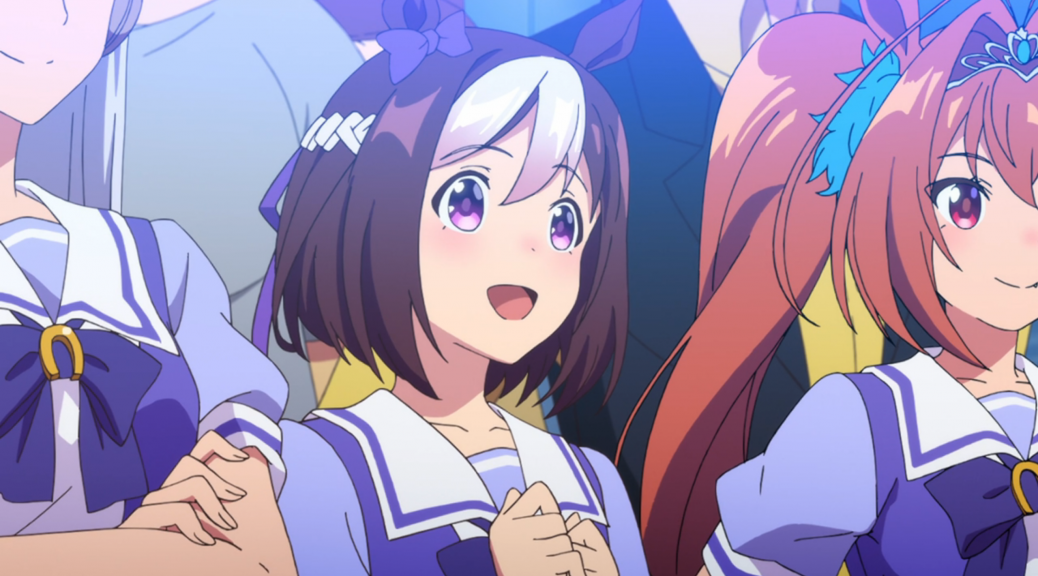 As anthropomorphized, cute-girl versions of non-human creatures, weapons, or appliances go, I like Special Week. She’s a nice horse girl, and it’s exciting to see her rack up wins on the racetrack, her horshoe-shod cleats making that exciting clomp clomp clomp sound as she does so. But I firmly believe she should die before the end of this season of Uma Musume.

Why? Because like all the horse girls in Uma Musume, Special Week was inspired by a real racehorse, a stallion born in 1995. Just like in the anime, SW’s mother died shortly after foaling him, and he had to be raised by someone else. While he had a brilliant racing career in the ’90s, and went on to become a successful breeding horse, sadly Special Week just recently died on April 27, 2018. Rest In Peace, Special Week.

Just like her namesake, I believe the anime version of Special Week should die. Yes it would be very sad, but think about it: Uma Musume is an anime based on a cell-phone game about equine idols with bushy tails. Absolutely no one expects anything from this anime at all. It is, at best, a commercial for a video game; at worst, a complete waste of everyone’s time and PA Works’ resources.

Now, can you imagine if the show did a poignant, soulful arc where Special Week died, out of respect to her inspiration horse? It would be a completely unexpected, brutal twist in a series expected to have zero twists. It would mean that we can’t necessarily tell the difference between good anime and trash anime at the beginning of the season, because anything can happen. Perhaps chaos would ensue: the seas would boil, cats would lie down with dogs, and Crunchyroll’s social media presence would stop being ungodly obnoxious. Or, it could usher in a new era of open-mindedness in anime: after all, if Uma Musume could shockingly kill off the main character, who’s to say what shows that are not about demi-human horsie girls could accomplish?

I don’t think of myself as a cold, unfeeling person. However, for the sake of anime– for the future of the world– I think it’s time to take Spe-chan back behind the barn. If she must go to the glue factory, let her become the healing glue that binds all of the different subcultures of anime fans together: as one proud, dorky nation.