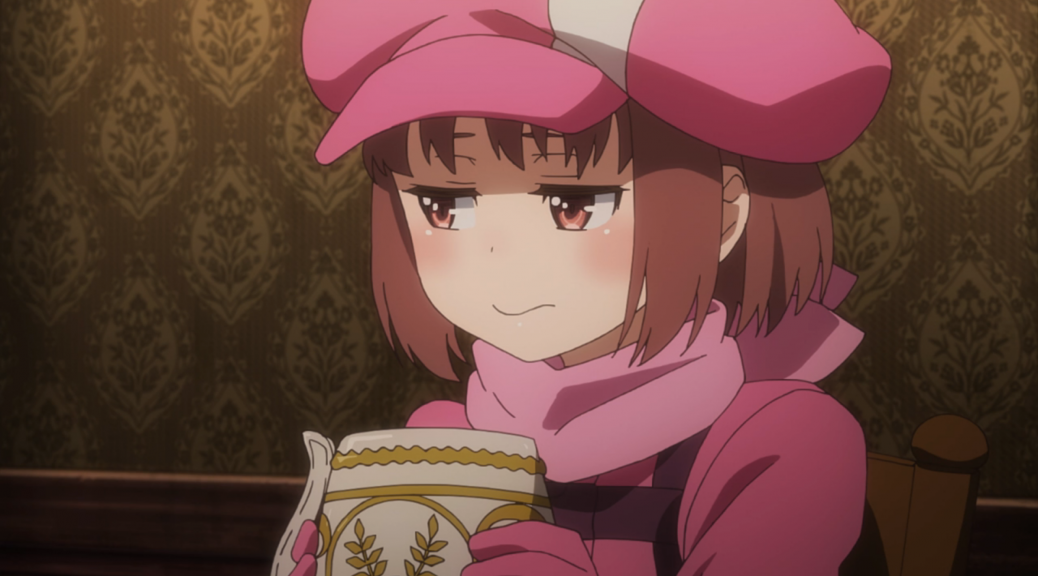 LLENN’s face in the picture above kind of mirrors my feelings on this episode. I appreciate what the show has done– starting us out in media res for the first episode, then carefully explaining who these people are and what they’re doing– but it’s taking a little too long. I think half of this episode could have been spent on the material covered here, and then we could have gotten back to the Squad Jam, where the action is happening. Too much time in this episode is spent going over the mechanics of the game, most of which we already knew from seeing it in action during episode 1.

On the subject of Squad Jam, I have mixed feelings about the origin of the tournament that we’re given here. Apparently SJ came about because someone was so inspired by Kirito and Sinon’s cooperation during the Ballet of Bullets* that he wanted to see a whole tournament based around team play. I appreciate the reference to the mainline SAO story, but uh…someone really needed to see Kirito and Sinon work together to get the inspiration for team-based play in a shooter? How anti-social is the playerbase of GGO that “Hey, maybe we could have a tournament featuring teams that work together,” is treated as some kind of innovative suggestion? You would think they would just do that as a matter of course.

I appreciate getting more insight into Karen’s life (and not just because we have the same name), but I’m not sure what to make about her fangirling over her favorite singer in this episode. Writing the fan letter seems like an immature thing to do, but then again, she is a fairly young girl; I think I’m making the mistake of assuming that because she’s tall and looks mature, she must therefore be mature. If that was the intention, wow, way to mess with me on a meta-level, show.

Anyway, I’m impatient for them to get back to the Squad Jam, not so much because I want to see it, but more to get it over with so the show can move on to other things. I’m pretty sure there’s a compelling plot in here somewhere, and I’d like to be introduced to it one of these days.

*I know CR calls it the Bullet of Bullets, but I refuse to accept that. It’s the Ballet of Bullets until Reki Kawahara personally tells me otherwise.*