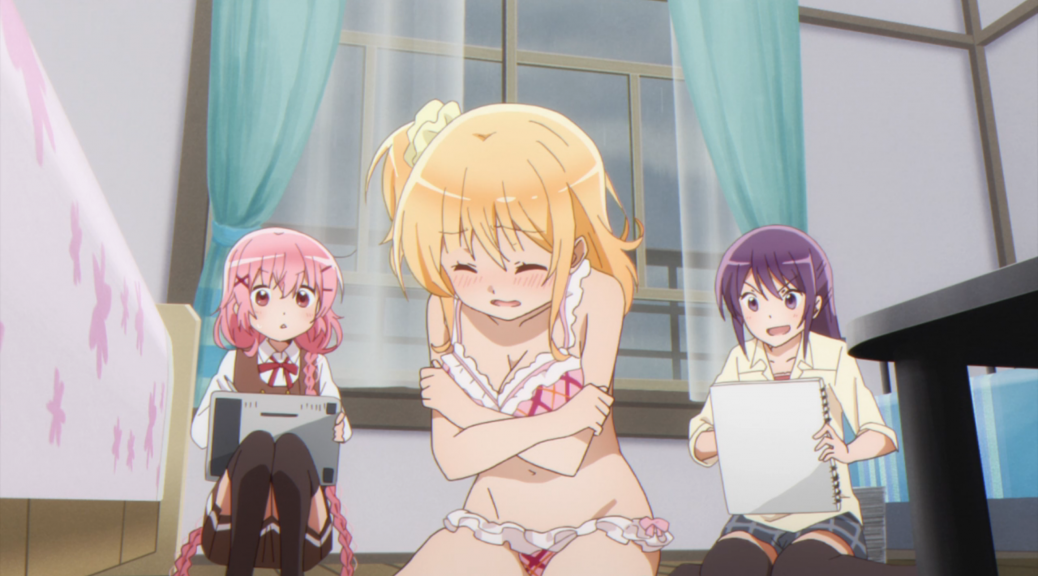 I’m beginning to develop a sneaking suspicion that Kaos is actually a terrible manga artist. Her ideas are shallow, her art is rough, and she seems to like drawing the same strip over and over again, without even noticing she’s doing it. Yet Kaos’ editor seems to think that she has some sort of “unique talent” (her words), and I’m beginning to wonder where she’s getting that from.

I’m a little jealous, honestly: if Kaos’ level of talent is enough to get her into the special Comic Artists Dorm, why didn’t I get to live in an awesome comic artists dorm as a teen artist? I may have sucked, but I doubt I was any worse than Kaos is. 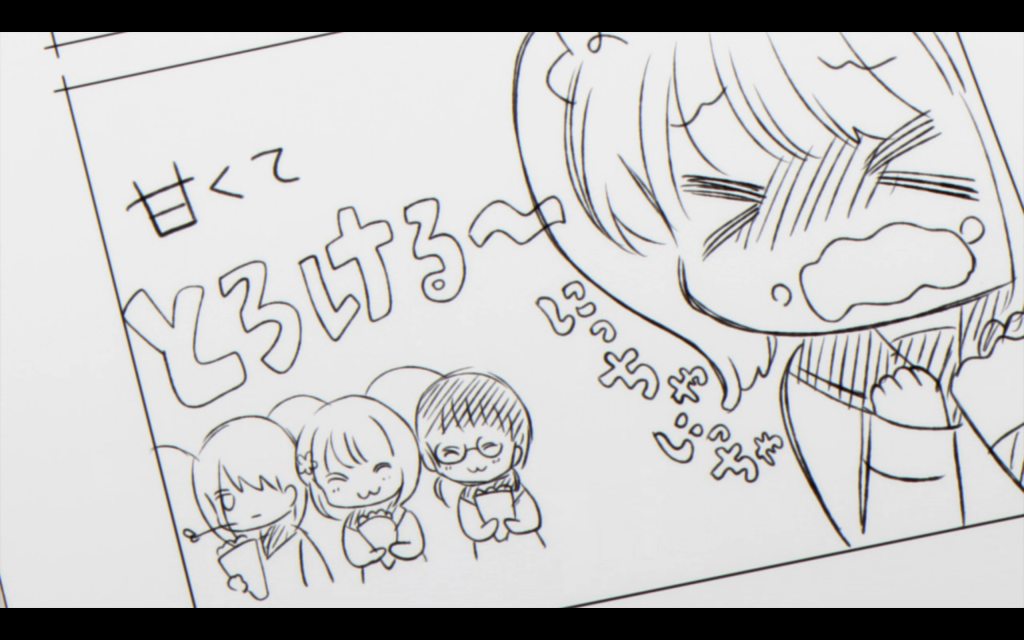 There’s plenty of blame to go around though, since the other characters’ attempts to help Kaos improve her work are all a little bit…off. Koyume notices that the fashions that Kaos draws her characters in are kind of lame, so the girls decide to dress Kaos up in a whole bunch of different outfits to improve her fashion sense. Err…that’s really what you think her manga needs? That’s the one element that was sticking out to you? Are there, mayhaps, other elements of her manga that might be more worthy of spending time on, like literally every other part of it?

Look, I know the whole thing was just an excuse to dress Kaos up in cute outfits, but they could’ve easily done that without such a dumb excuse. 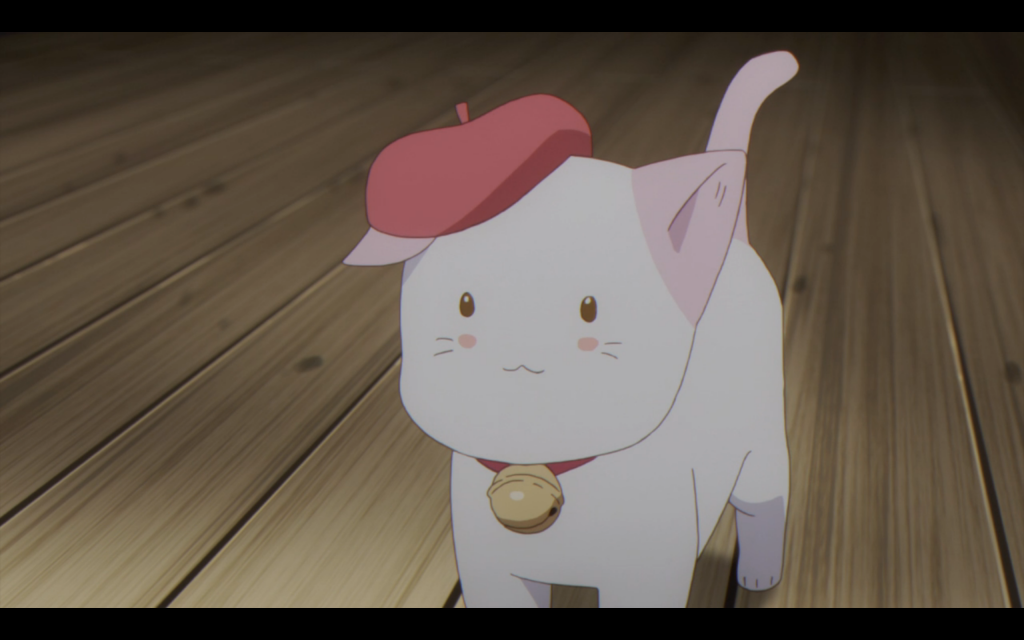 I have nothing to say about the Kaos-Kitty wearing a beret, I just felt like it would have been criminally negligent not to take a screenshot of it at some point.

The second suggestion for improving Kaos’ work is for her to spend some time sketching, which is actually a damn good suggestion. And having the girls available to pose for each other for life drawing is one of the clear advantages of living together. However, for some reason, they call it a “sketching contest,” which is weird. Why would you make it competitive, when Kaos already knows her art is less developed than everyone else’s and she’s really self-conscious about it? Isn’t that just setting her up for failure? However, despite calling it a contest, there doesn’t seem to be any competitive element at all and the girls just draw together. So it wasn’t a contest? I’m so confused. 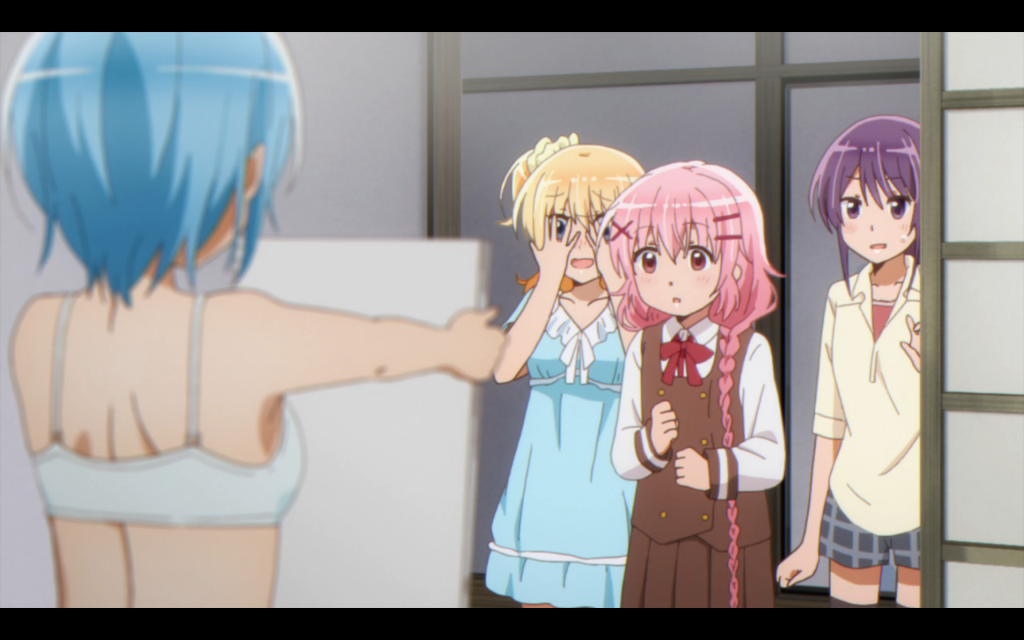 The stuff in this episode about how each of the girls has a different idea of what female beauty is supposed to be is pretty on-target. It seems like the thin, beautiful girl is always upset because she wishes she was curvy, and the curvy, beautiful girl is upset because she wishes she was thinner. The fact that their chosen manga genres seem to magnify their insecurities is interesting to me.

They are doing something interesting with Kaos though, since she’s a teenaged girl who has trouble thinking of herself as a teenaged girl. The best part of the episode is when the other girls notice that when Kaos talks about teen girls, she talks as though she’s not one herself. You could spitball a lot of reasons for this, like maybe Kaos is actually trans, but I think it most likely has to do with her complex about her size; she’s always thought of herself as a kid due to her tiny size, and she can’t get out of that mindset. Even though she’s technically a teenager now, she still feels like a little kid standing on a box, looking in on the glamorous (or so she thinks) world of teen girls from outside the window.

I can relate to that; I think there are so many romantic ideas about being a teen girl, that sometimes actual teen girls can feel like they’re not “really” teenagers because their lives aren’t cool enough yet. I definitely felt like that during my teen years, at times.

That’s the weird thing about this show though. I want to say it’s missing the mark, but then Kaos will do or say something that really takes me back to how I felt when I was that age. Also, her admission that she never knows when to get rid of clothes because she never  never grows out of them kind of hit me where I live. My favorite gray dress is from 1996, seriously not even kidding, I wore it last month.

One more thing: I’m not sure what to make of how this show handles Kaos’ obvious attraction to women. When ever Kaos says or does anything that makes it clear she’s into girls, the other girls just dismiss it as her “acting weird,” missing the point entirely. I could see getting pissed off by this since the show seems to be equating homosexuality with weirdness, but I don’t think that’s the intention; I think the girls are all supposed to be pretty innocent about sex, and having them be able to nail down what’s going on with Kaos requires more sophistication than they’re supposed to have. They just don’t have the experience to be able to say “Clearly, Kaos is a lesbian, or possibly bi-sexual,” they just know her reactions are different from what they would expect, so they just call her weird and stop thinking about it.

I find myself wondering if real teen girls would be this ignorant about sexual attraction, even younger teens, but then that’s falling into the trap of worrying about whether an obvious fantasy is “realistic”; of course it’s not. The issue isn’t whether or not it’s realistic, but whether or not it’s believable given everything else we know about the setting. This is a world where a manga editor tells a 14-year-old girl, “you draw hot women, you should draw sexy comics!”, despite the fact that said 14 year-old-girl doesn’t know anything about sex, so I guess it kind of fits. Comic Girls seems to be based around the girls being surrounded with sex, for reasons both voluntary and not, and having no idea what they’re actually looking at. If they had a clue what was going on, it would be a very different show.

So I found more to say about this episode than I usually do, which is good I guess? I don’t know. I don’t regret my decision to blog this show exactly, but it’s not turning out like I thought it would either. I do find it interesting that this show is sort of the one last bastion of hope for moe fans this season; where are all the other shows about four cute girls doing a thing? Is this really the only one? What happened? I’m still not quite done wrapping my brain around the fact that this seems to be the season where moe seemingly died AND Full Metal Panic came back; I mean, what kind of timeline is this anymore? I feel like someone made a wish on a monkey’s paw and we’re all going to be hit with the dark side any second now.