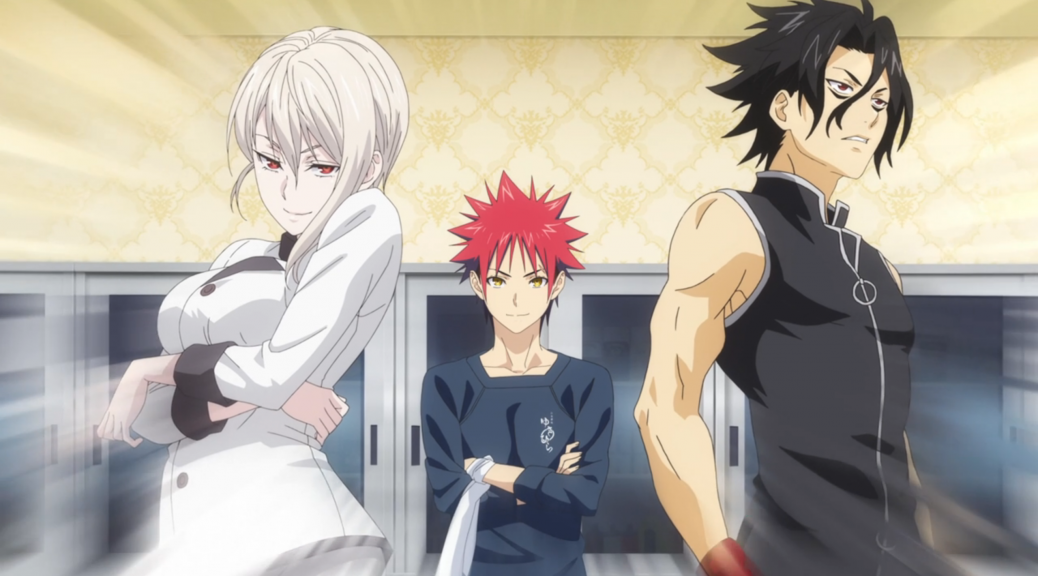 This show is always so nice to me. Right when I realized that Golden Kamuy was too dark, so I’d be missing a Hokkaido-based show this season, Food Wars! decides to move this whole cour to Hokkaido for no apparent reason. Really, it’s inexplicable, unless they’re catering exclusively to me.

”Ok, time for advancement exams. We could hold them on school grounds, but where’s the fun in that? Let’s conduct a ludicrously expensive, high-class rail tour of northern Japan, and fit in the exams all over the prefecture. I hear Hokkaido is nice this time of year…the dead of winter.” 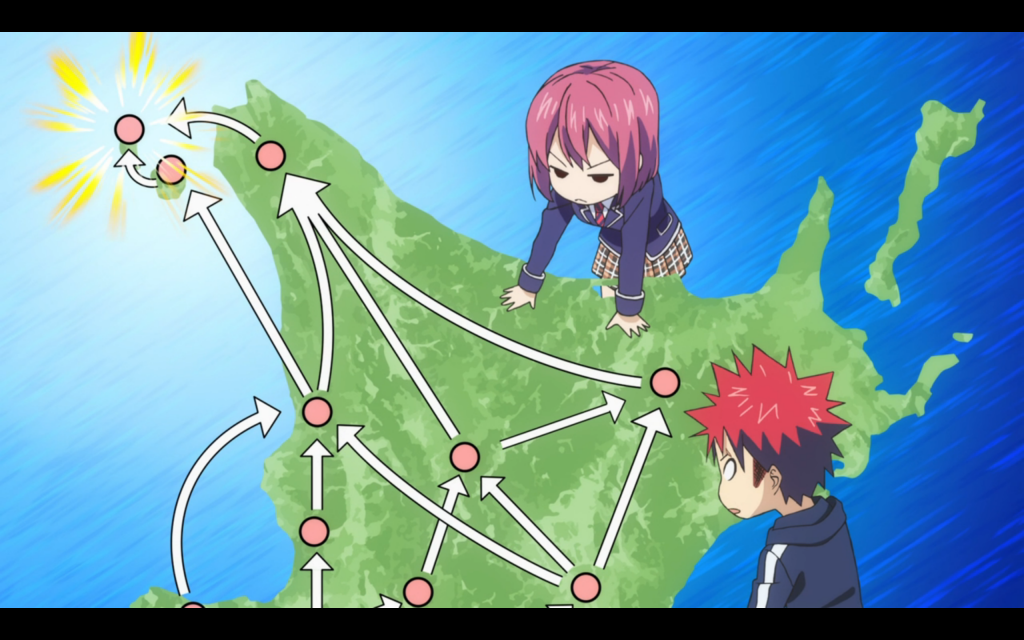 What are they even going to be cooking by the time they get to those islands that are practically in Siberia? “Esteemed judges, I have prepared for you Grilled Black Bear Flank, with a reduction of tree bark and hardy forest lichens, and a side of Caramelized Reindeer Hoof.”

Really I just love the ridiculous opulence of Food Wars!, the fact that they’re setting their exam arc on a billion-dollar luxury train for no good reason. It’s hard not to read it as little bit of commentary on conspicuous wealth when you’ve still got characters like Megumi, who grew up in a poor fishing village, gawking at the whole thing. Maybe I was being dense last week when I questioned the writer’s choice to make this arc political, because it’s not like that’s really a new thing for this series; I could say it used to be more subtle about politics, but has this franchise ever been subtle? 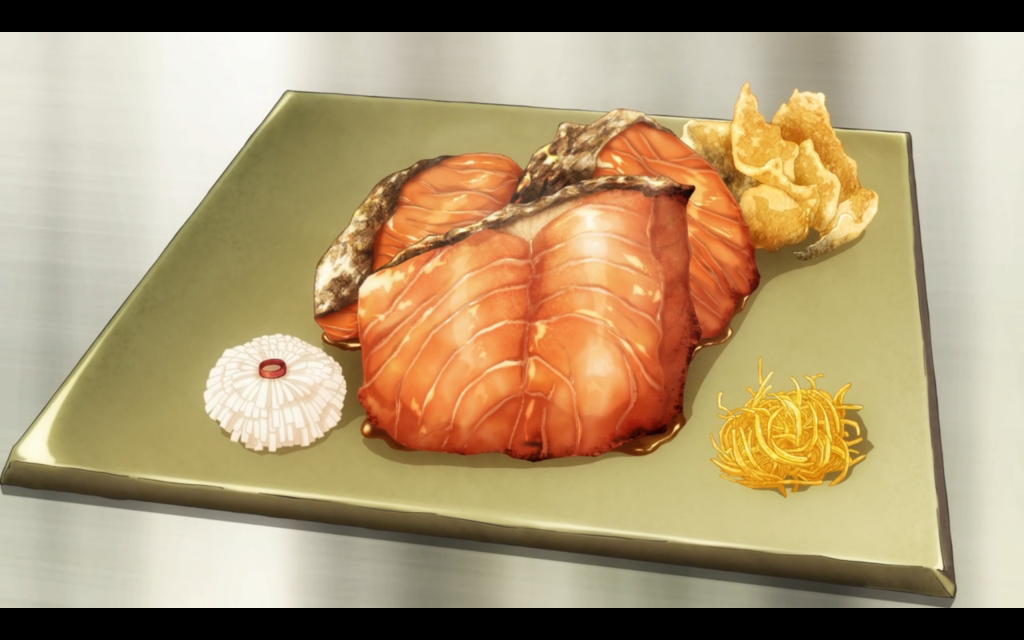 Anyway, PLOT! Erina decides to save her buddies the boring way, by tutoring them in cooking knowledge to help them pass the exams. I was really hoping she would just go up to the instructors, be like “I’m the God Tongue and you’re some no-name cooking teacher: pass my friends, or I’ll tell everyone that your food is always underseasoned,” and they would all fall before her in terror. Alas, Erina is developing into a nice young lady and her character growth does not allow her to do anything so underhanded and despicable; it would work though, wouldn’t it? I’m pretty sure it would work. Everyone fears the wrath of the God Tongue. 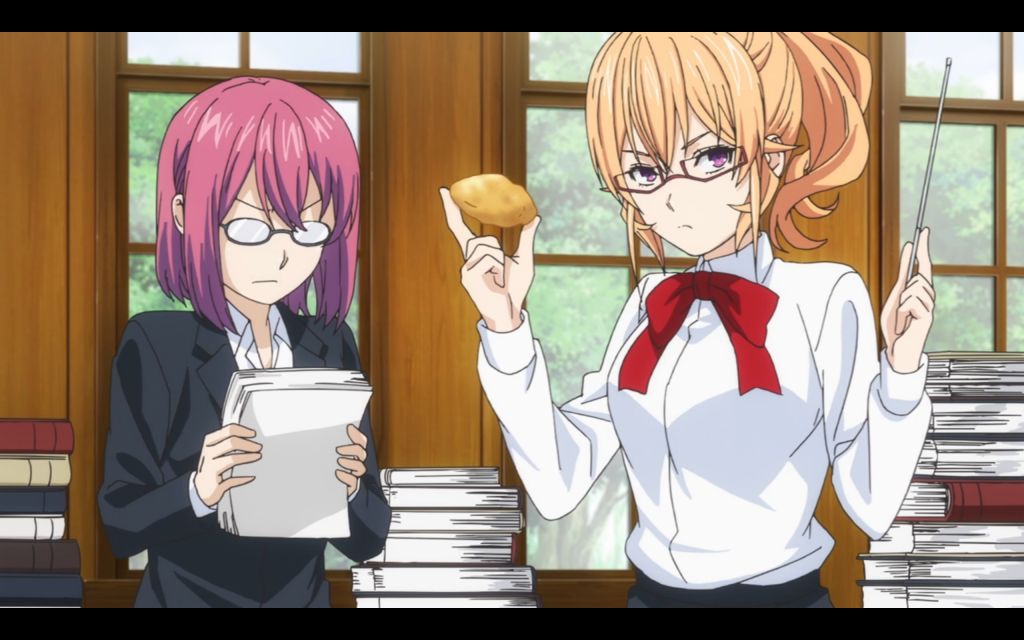 I don’t know who it is, but someone out there is very, very excited for the appearance of Sexy Teacher Erina, and I’m glad they’re having a good day. If they make a figure of her, she should definitely be surrounded by sacks of delicious (and varied) potatoes.

Speaking of the teachers, let us consider for a moment the curious moral fiber of these instructors who are conducting exams in Hokkaido. Apparently they are morally fine with hiding information from the students they intend to fail for political reasons, morally fine with giving sub-par ingredients to the students they intend to fail for political reasons, and will even gloat openly about their corruption in front of the students they intend to fail; none of that is going to keep them up at night with a guilty conscience. Yet they cannot, CANNOT bear to fail anyone who brings them a tasty dish. Once they taste anything with more depth of flavor than a Chicken McNugget, suddenly they’re all “Oh no, I can’t go along with my diabolical plan to unfairly fail you out of school, the sublime cook on this fish has turned me into a decent human being again!” I guess it does fit with the overall theme of this show about how the sensation of food can be overwhelmingly powerful, but man, talk about your arbitrary morality. 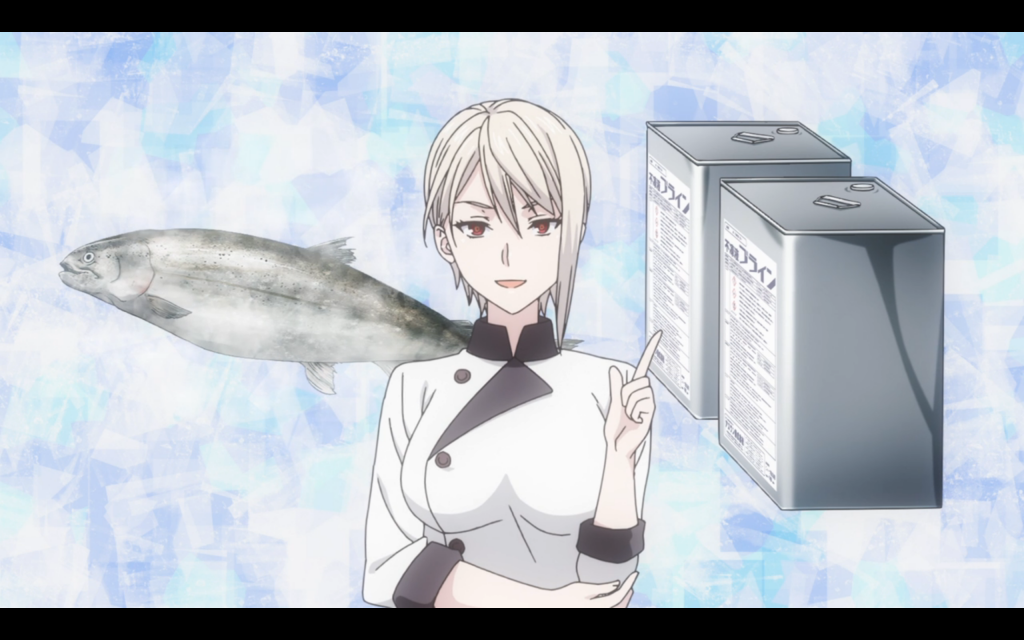 For some reason I find it amusing when Alice explains the chemistry of cooking; possibly because she explains everything like she believes that everyone should know all this already, and if you don’t know the precise temperature that the cell walls of a fish lose their integrity, you are less than dirt to her.

Anyway, more PLOT! Everyone passes the rigged test partly due to Erina’s tutoring, and partly because they somehow know where to find underground seafood vendors that Totsuki Academy doesn’t know about, since Totsuki supposedly bought up all the good salmon in the area before the test. I can imagine Alice Naikiri having an encyclopedic knowledge of where to find every single ingredient in Japan, if not the entire world, so I guess that makes sense. I was hoping Megumi was going to use her fishing skills to hook the salmon they needed, but alas, it’s the wrong season for salmon fishing. I really hope Megumi uses her fishing skills to save the day some other time though. 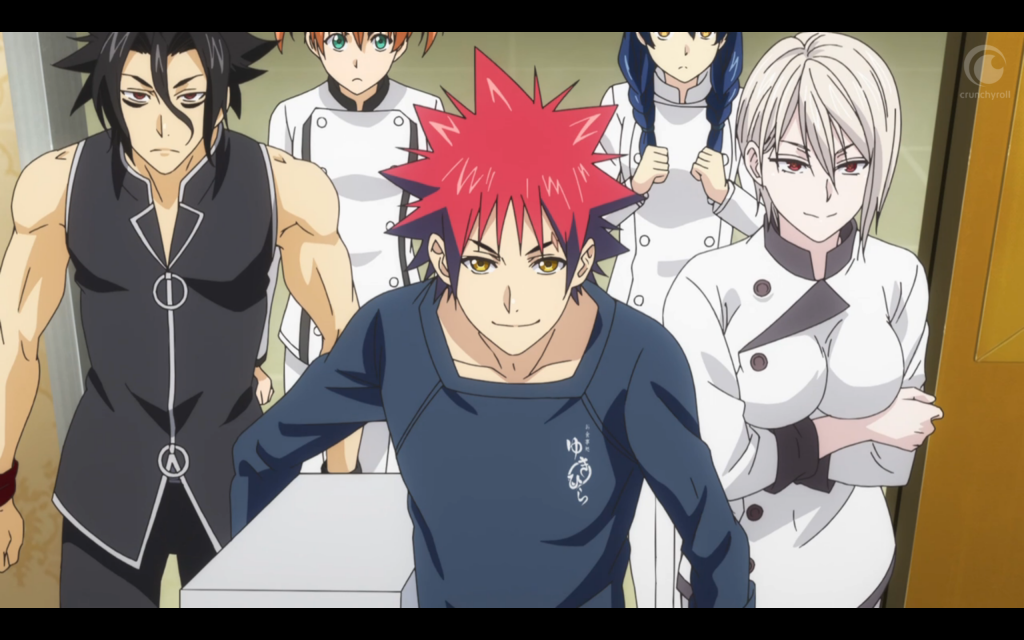 Even more PLOT, really more like character development though! Erina wonders why everyone is stopping to talk to her after the first exam has passed, mostly because she’s never had friends and it’s a new experience for her. It’s yet another reminder of how being born with ultra-sensitive taste buds has completely fucked up her life, and it’s honestly really sad if you stop and think about it for a moment. Fortunately, she and Soma have A Romantic Moment Under the Stars and that’s enough to distract us from thinking anymore about Erina’s dismal social life up to this point. 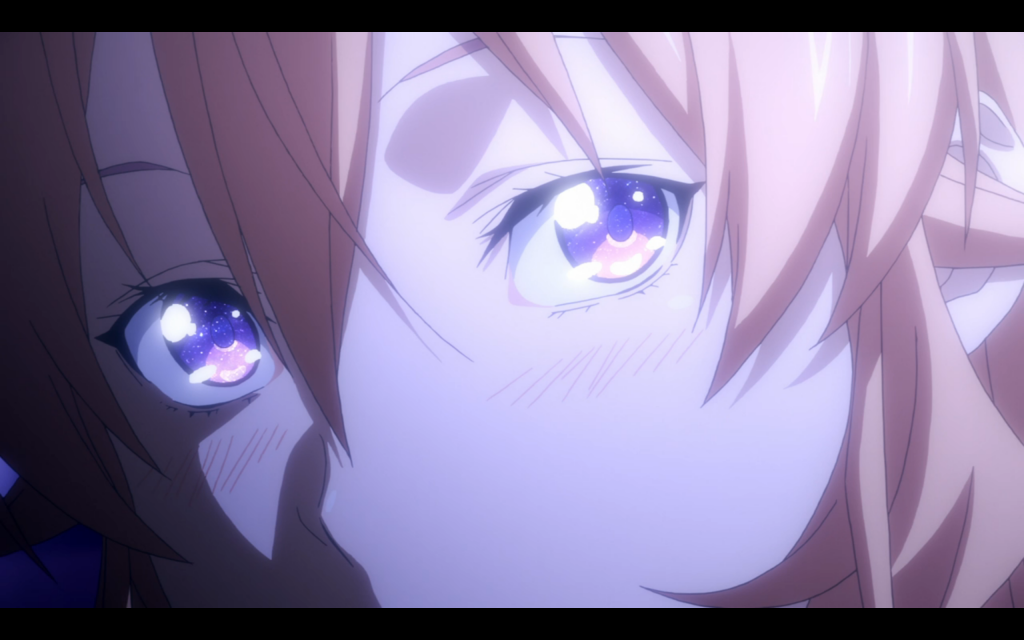 That’s just the stars reflected in Erina’s eyes, not the glow of her unending ocean of love for Soma. Unless you buy into symbolism and all that, phhht.

I’m not sure what to think about Soma X Erina as a couple. Obviously they like each other and they’re becoming more compatible, but…Megumi and Soma are just so sweet together. Ironically Erina needs him more right now, but more as a friend than as a lover. I think Soma X Erina is supposed to be our endgame couple, but it’d be really cool if the two of them developed an intimate friendship and Soma ended up marrying Megumi instead. Right now Soma seems to value all his friends pretty much equally and doesn’t have romantic interest in anyone, but that may change if he ever beats his Dad in a cooking battle; then, he could allow himself the luxury of wanting something else in this life.

So, this season continues to be fun, and I look forward to seeing what’s coming up on the World’s Most Impractical Choo Choo Train Final Exam. Although, if they don’t use the train setting to do a Murder on the Orient Express kind of episode at some point, I’m going to consider that a missed opportunity.