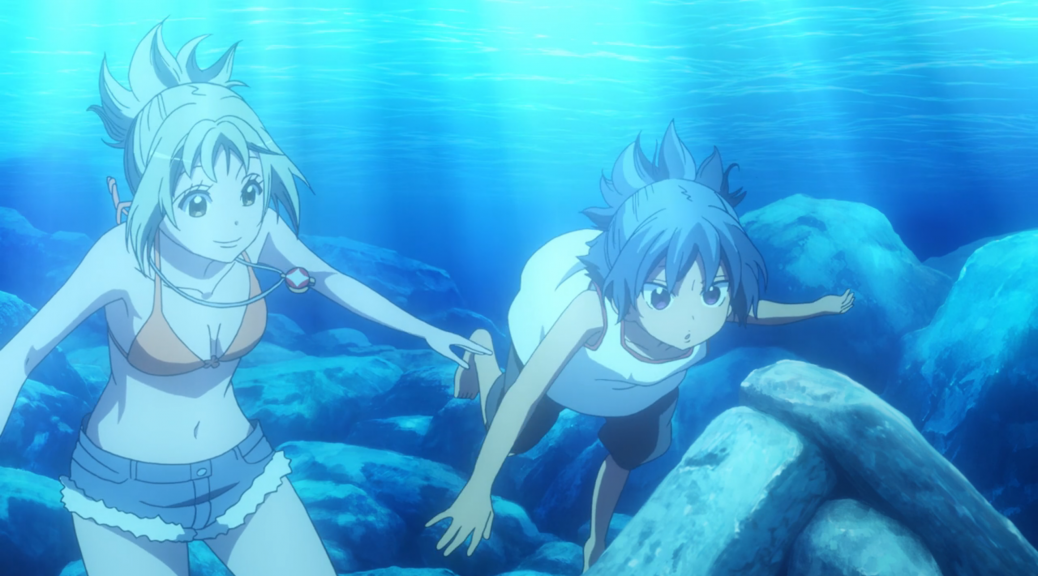 I’m pleased to report that this episode featured an underwater storyline, which is all I really want from this show– well, other than this face: 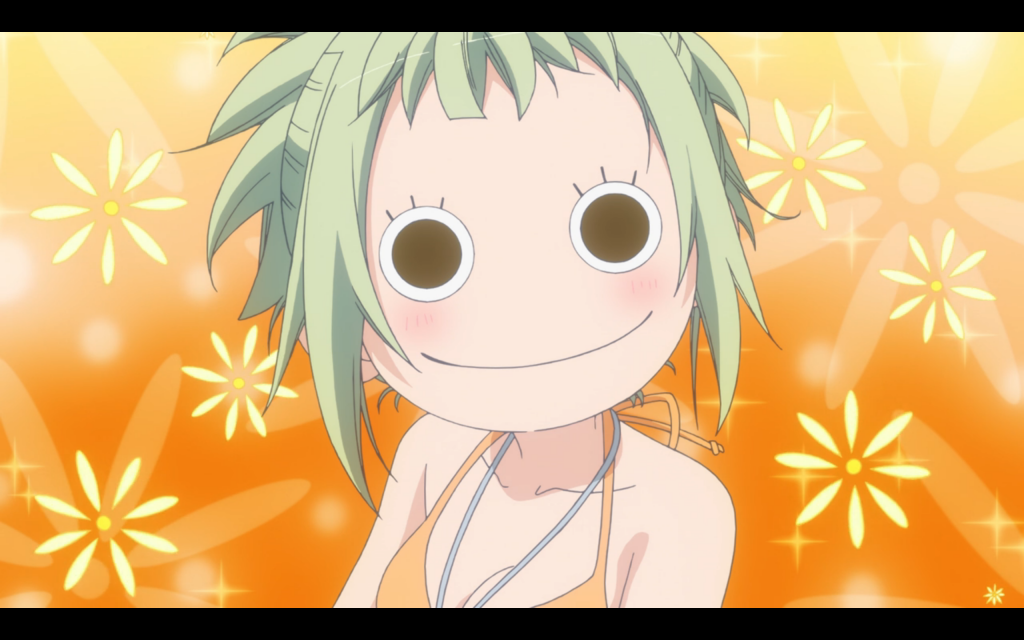 This screenshot serves no purpose other than to provide another example of my beloved Pikari Troll Face; I don’t think I can blog about this series without including at least one.

Technically, it wasn’t a scuba dive because Pikari wasn’t wearing her scuba gear and was in fact free-diving, but that’s the kind of thing that only an obsessive rules lawyer would get stuck on, and I’m not an obsessive rules lawyer– at least, I don’t feel like being one today. Anyway, the story about the Mommy Octopus and her octopus babies was beautiful and a little sad, and took me by surprise, just a tad. It’s weird to hear Pikari, of all people, explain the inherent cruelty of Mother Nature and how mommy octopuses go off to die before their children are born.[EDIT: I just remembered that the plural of “octopus” is “octopi,” and now I’m annoyed, because I hate it when English gets insecure and tries to be Latin. Octopuses FOREVER.]

Interestingly I think Pikari has an intuitive understanding of this kind of stuff where it relates to the ocean–sad things happen, and that’s just part of the life– but not so much with her friends. Teko doesn’t know anything about octopuses, but she’s the one who can sense the looming darkness in their relationship; that it’s too good to last for long. I don’t think Pikari can see that coming. 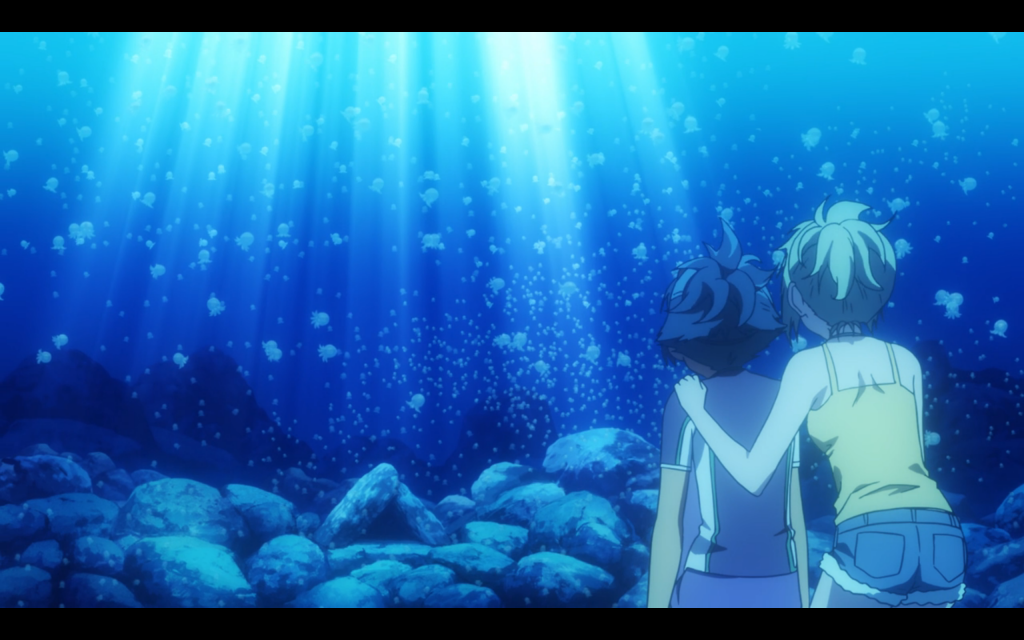 These underwater scenes are beautiful, but I’m a little disturbed by the fact that Pikari and Kokoro seem to be able to stay underwater indefinitely. Maybe Pikari doesn’t even need scuba equipment because she’s a mutant with the power to breathe underwater, and tensions will rise when Teko discovers her secret? I’m up for an Amanchu!-X-Men crossover.

In addition to the Saga of Mommy Octopus, this episode also features a fireworks show, where Teko and Pikari get properly dolled up in yukata for the event. I noted last week that Pikari was the closest we’re going to get to seeing an adult Yotsuba in anime (or any Yotsuba in anime, for that matter), but I wasn’t being entirely serious; now I’m not so sure. Pikari’s sunflower-accented yukata really seemed to be playing up her resemblance to Yotsuba, since sunflowers are an important motif in that manga. I’m going to be on the lookout for more “Pikari is Secretly Yotsuba’s Older Sister” hints as the show goes on. 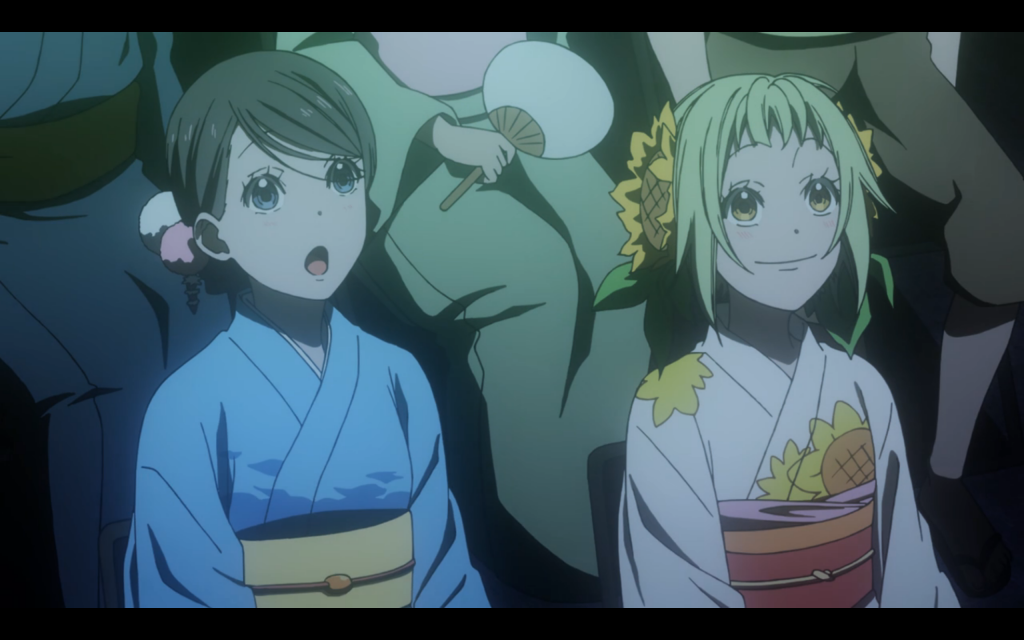 It’s hard to get a good screenshot of Pikari’s yukata since this whole part of the episode is really dark. Stupid firework festivals, why do they always hold them at night?

Teko has very little to do in this episode, other than stew a bit over the fact that Pikari has made a new friend and she’s trying very hard not to be jealous. I like the fact that they’re splitting up the girls a bit and giving them their own storylines; instead of suddenly having to separate, which is what Teko fears, it looks like the girls are gradually going to stop being so attached at the hip and pursue their own lives. So far, I’m impressed by the way this season has been addressing Pikari and Teko’s friendship; it would be easy to just have them palling around every day, eating yakisoba and making adorable faces at each other, but watching them test the confines of their friendship is a hell of a lot more interesting. 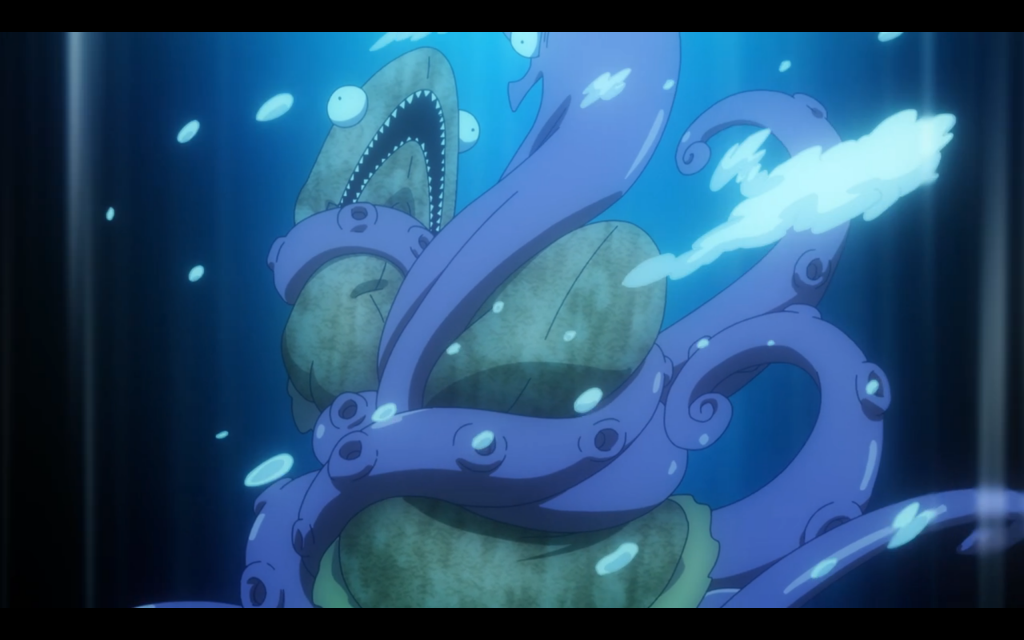 Mato, the diving club advisor, also gets an interesting flashback in this episode that seems kind of separate from everything else going on around it. I feel like Mato has her own storyline that we’re going to eventually see, but for now we’re just getting tiny bits and pieces. I hope they get on with it, because she’s actually more interesting than the high school kids, at least to me.

My only real complaint about this episode is the part where Ai punches Makoto because…huh, I don’t even remember why she punched him, it wasn’t important. But that’s the problem, this trope of girls hitting guys for no good reason. It works in something like Love Hina, where the over-the-top nature of Keitarou’s abuse from the girls just adds to the overall zany humor, but I dislike the girl-casually-abusing-guy-who-just-has-to-sit-back-and-take-it pattern that shows up in so many anime. I get why that might have felt edgy and innovative decades ago, but now it just makes the female character look like a horrible person.

Overall, pleased with the Amanchu experience, transparent octopus babies/10, would scuba again. Let’s wish on a sunflower that the show can keep up this level of quality for the whole season.