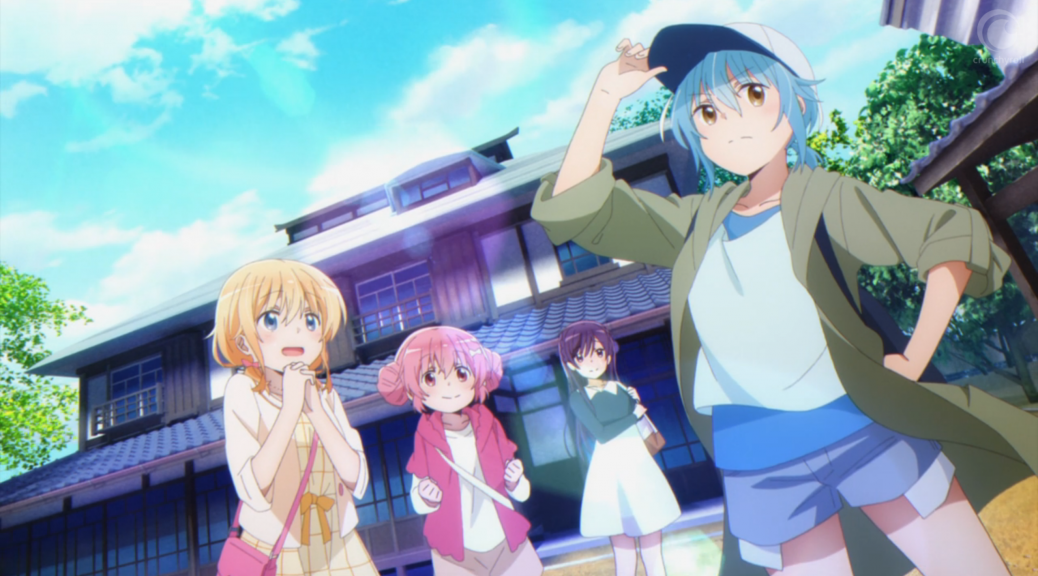 I really want to like this show, but the writers are making it hard for me. The first part of the episode, where the girls go shopping at a huge art supply store, is great (and exactly what I want from a show like this), but then there’s the second part…where the girls go to school. I really don’t need Comic Girls! to show the girls going to high school, I can see girls attending high school in virtually every other anime that has ever been made. I want to see these girls draw comics, and do other comics-related things: Don’t waste everyone’s time by showing them sitting in math class. 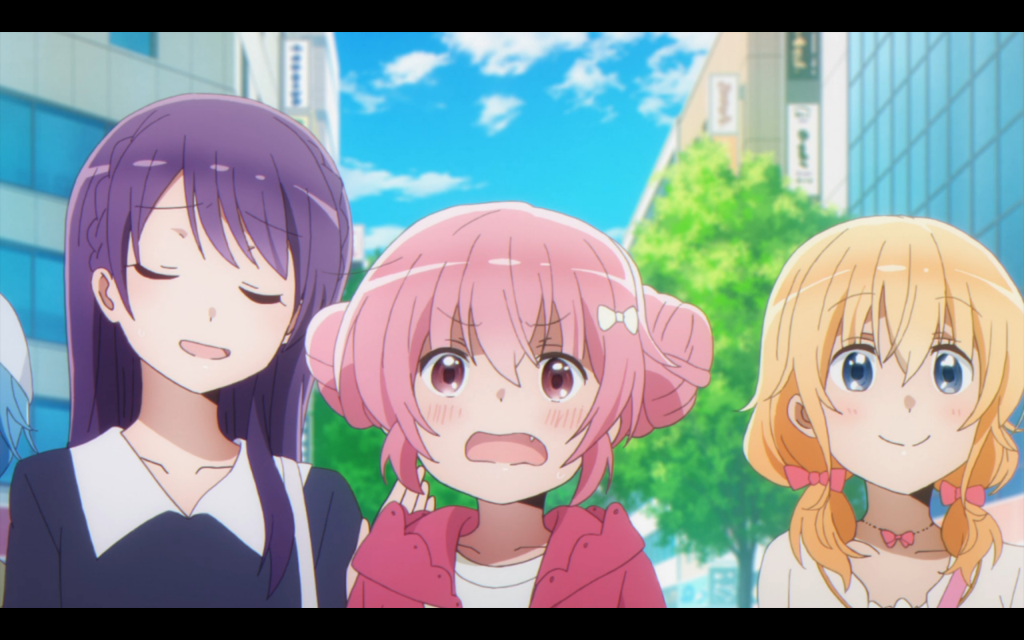 I don’t know if they changed her design, or I just noticed it this episode, but Kaos has noticeable fangs. I think I’m just going to start assuming all of these tiny fang-girls are actually vampires until proven otherwise; you can never be too careful. Maybe she can’t draw characters in proportion because she can’t see herself in the mirror?

They do tie in the school segment to the overall premise by showing how the comic girls try to keep their manga careers secret from their classmates, but it’s all just a little flat. I feel like this show has the potential to be really fun, but it’s afraid to stray too far from “cute girls doing cute things” genre conventions, so it wastes time on irrelevant stuff. 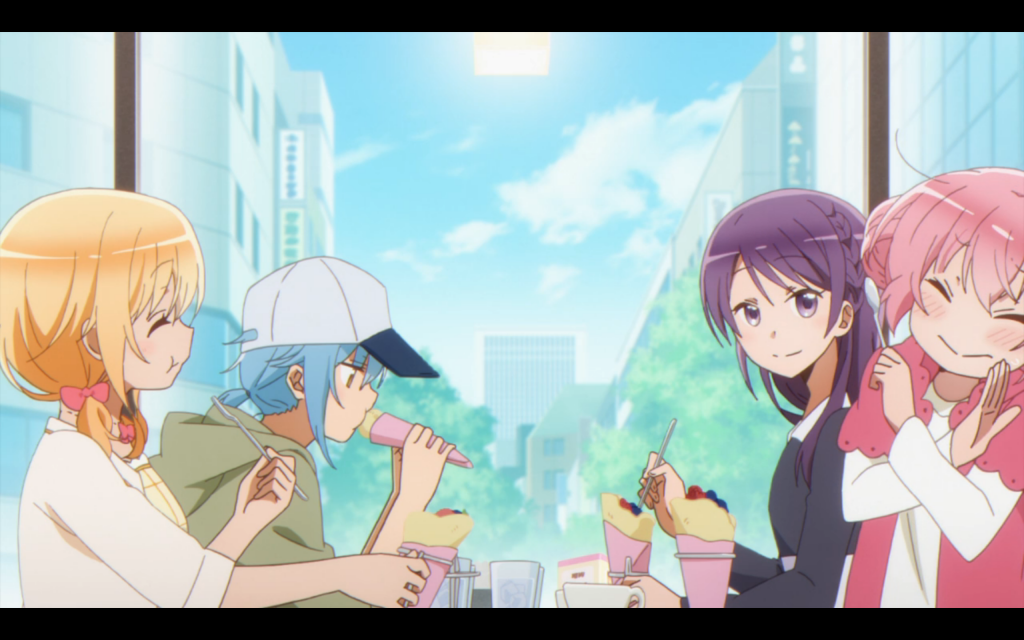 You might think I’d be complaining about the girls going to eat sweets, since that’s a pretty generic anime-girl activity too, but hey, I’m not made of stone; ladies gotta eat.

Don’t get me wrong, I don’t even mind the “cute girls doing cute things (CGDCT)” tropes, but they work better in some cases than in others. For instance, in last season’s Slow Start, there was no pretense that the show was about anything other than CGDCT, so seeing the girls just hanging out in school was par for the course. Comic Girls! is supposed to be about something more specific than that; I’ve seen people compare it to Slow Start, but is that really a compliment?

[For the record, I found Slow Start oddly compelling and watched all of it, so it’s not as though I hate the show. It wore it’s complete lack of interest in plot as a badge of honor, and I respect that kind of chutzpah. Still, it’s a good example of a genre show that stays firmly in it’s niche and has no further aspirations.] 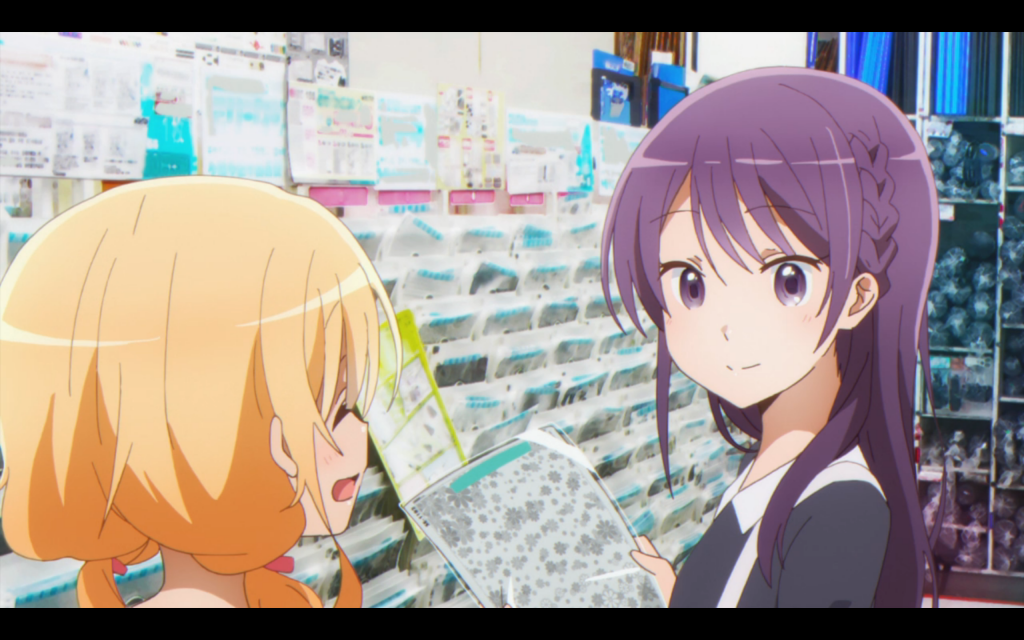 Can I take a moment here to talk about how completely outdated screentone seems to me? I certainly get the appeal of doing your artwork in pen and ink instead of digitally, but screentone just seems so…anachronistic? It’s like, you notice your toast is dry, and instead of going to the refrigerator, you walk outside to the barn and spend an hour churning your own butter.

I like the way the show often breaks into moving, manga-styled panels to convey jokes; it’s appropriate, and keeps things lively. But I’m annoyed that this show seems to leave me with so little to say about it yet again; it’s just missing something that shows like Hidamari Sketch have in spades, and I’m not sure what it is. You could say that the characters are bland, but I don’t know if that’s really fair; I relate to Kaos and her boiling cauldron of insecurities, and the others are coming along. Still, something just isn’t quite gelling here. 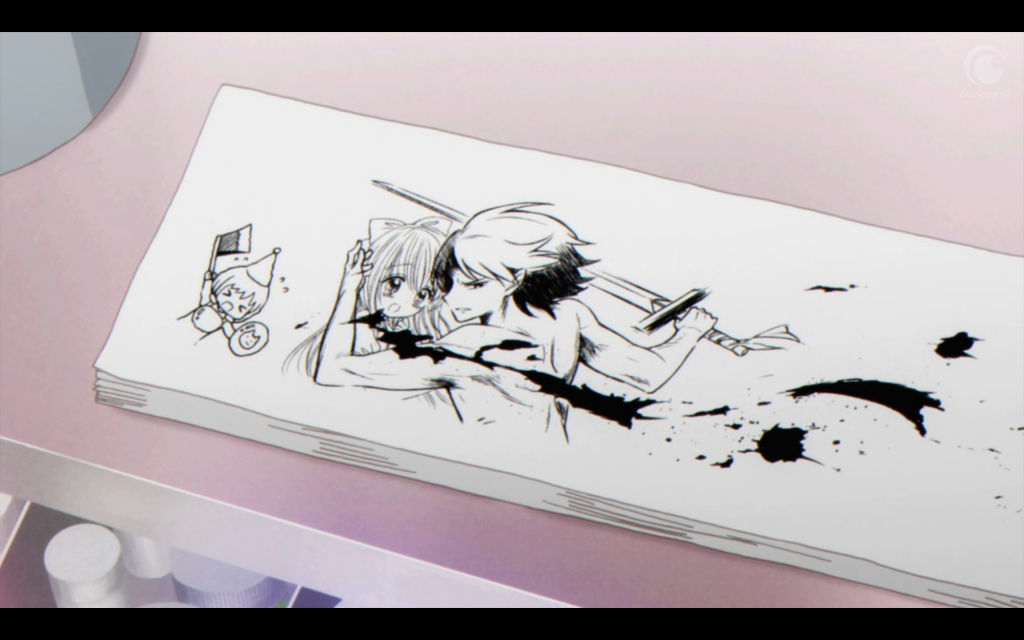 Hopefully next episode we’ll see the continuation of the girls’ combo manga, I Can’t Believe My Neighborhood Axe Murderer is This Adorable; Protect Me Shirtless-kun!