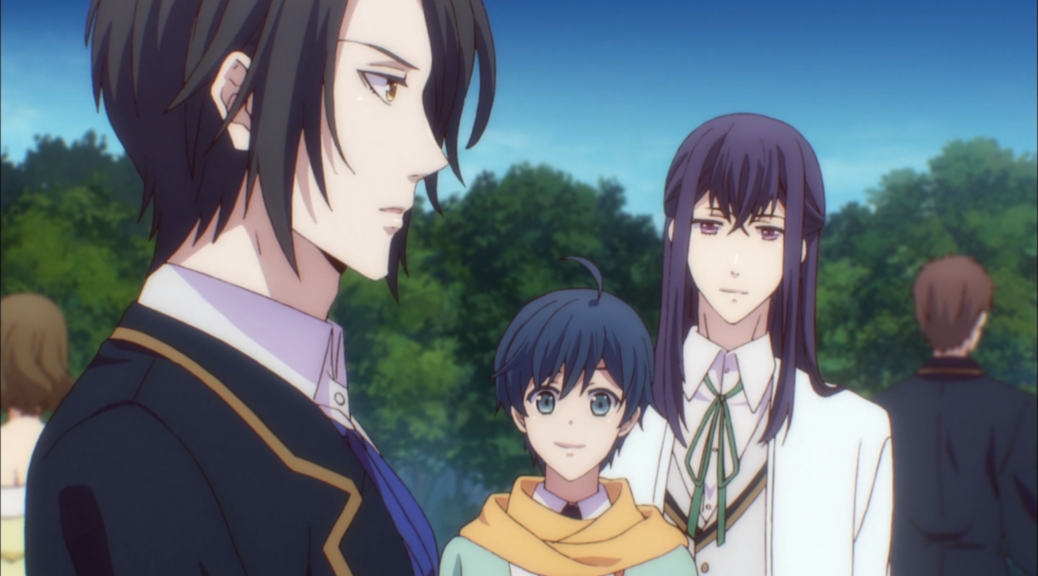 You know, I like to think of myself as a pretty generous anime viewer. I don’t write off shows just because I’m not in the target demographic, and often find surprising substance in shows that others won’t even give a chance. I don’t get as caught up in things like animation quality and voice actor name recognition as a lot of fans do, and I don’t care much about studio pedigree; I judge a show based on whether I’m interested in it or not, regardless of who makes it. And on the rare occasion when I do think a show is really poor, I make it clear that’s just my take on it; I don’t try to make a case for why it’s objectively terrible because a)you can’t and b)that’s insulting the fans of the show for no good reason.*

However, even as a generous viewer I have…certain expectations. One of them is, if the show is called “Butlers,” it should be about butlers, and not just a bunch of obnoxious high school students doing their typical student-council nonsense. We find out that main guy J is a Butler, but in this universe that seems to mean that he’s some kind of magical armed guard, and not a butler in any traditional sense. The other main character, Hayakawa, acts a little more butler-like in his role as a coffee shop barista, but that’s not saying much.

Really it’s just a boring episode. The mystery of who J is, and why he’s looking for Hayakawa, is uninteresting because neither of them are interesting characters. The surrounding characters are bland as well, and there’s a ton of them; this show seems to want us to get to know the name of every single student at this ridiculously posh academy. Why? Why do I need to know the names of all these people? Why does it matter when they’re all boring?

By the end of the episode, when J’s mysterious past has been semi-revealed, then everything that’s come before makes even less sense. Why would J take on the role of student council president, when he’s trying to investigate something that happened 100 years earlier? Wouldn’t he want to keep a low profile to keep other students from finding out about the Secret Order of Not-Butlers or something? It seems like everything has been contrived so the show can have a typical high school student council setting/plot, even though it doesn’t work with the rest of the story.

If you want to see a bunch of pretty guys talking to each other, than maybe this is the show for you, but so far, it doesn’t seem to have much to offer beyond that. I really hesitate to call shows boring, because too many shows try too hard to grab the viewer in the first episode and end up feeling forced and frenetic; I respect the decision to let the story develop at its own pace. However, when I don’t care about any of the characters, and the whole thing seems wildly disjointed, slow pacing is just another nail in the coffin.

I’m disappointed, because I thought this might be a fun, time travelling butlers show. So far, it’s just incredibly tedious, and even if you’re into it for the “pretty boys hanging out” angle, you’d be better served by watching Yotsuiro Biyori, which has cute guys that I don’t want to punch in the face. This is the first real dud of the season for me.

*That’s my stance now, anyway. You can find articles from, say, 2010 when I was a less generous viewer, but seriously, does anyone care? No one cares.