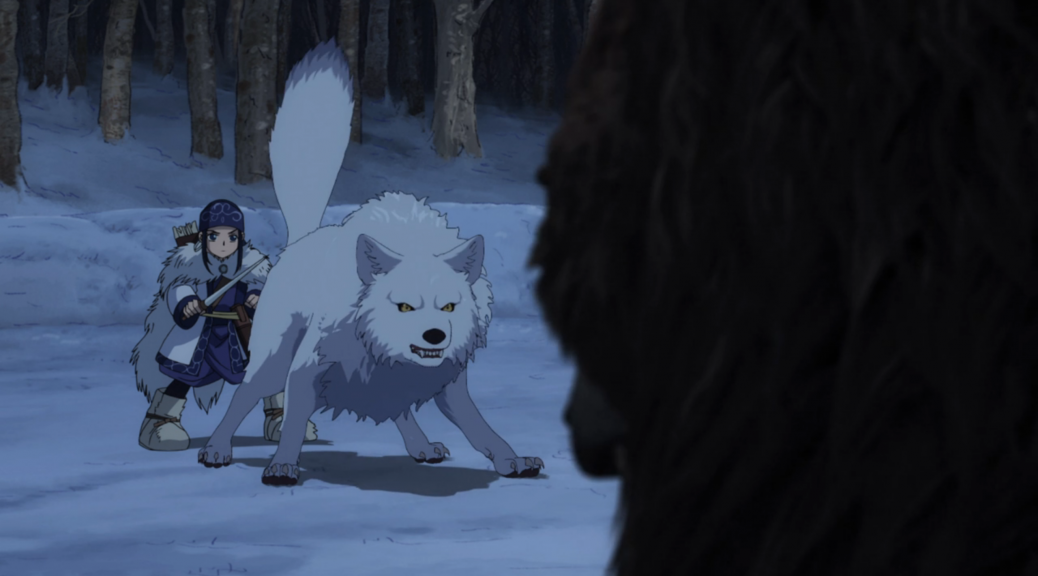 Wow, what an incredibly well-done episode of an anime that I will never watch any more of.

I was excited for this preseason because of the opportunity to learn about Ainu culture, but the violence is just too much for me. When a single episode includes a battle from the Russo-Japanese war (with bayonets), cutting a person’s skin off, and killing multiple bears, that’s past my limit for dark stuff.

Granted, I think with the themes Golden Kamuy seems to be dealing with here, it should be visceral and dark; I’m not disputing that. I just have minimal tolerance for violence and gore, and that’s my problem. I am intrigued by several aspects of the story though, so I could see myself reading a summary of it after it’s aired, or something to that effect; it’s just, if I try to watch any more, I’ll be watching through my fingers.

So I give this show the weird recommendation that if you have a tolerance for something that I absolutely do not, you will probably enjoy it. And hey, all you guys out there who love to say that “moe is killing anime?” That modern anime is too fluffy and cutesy, and you want to go back to the good old days when it was all hyper-violent OVAs, like that part with the dog getting ripped apart in Battle Angel Alita? You guys had better watch the hell out of this. Watch it, buy the Blu-Ray, cosplay as the Immortal Sugimoto at cons, whatever it takes to show your support.

Because this is the kind of anime that a huge chunk of anime fans keep claiming they want, and if it doesn’t end up being successful, I’m going to have to wonder what the fuck you’re all talking about.

2 thoughts on “Golden Kamuy, Episode One”