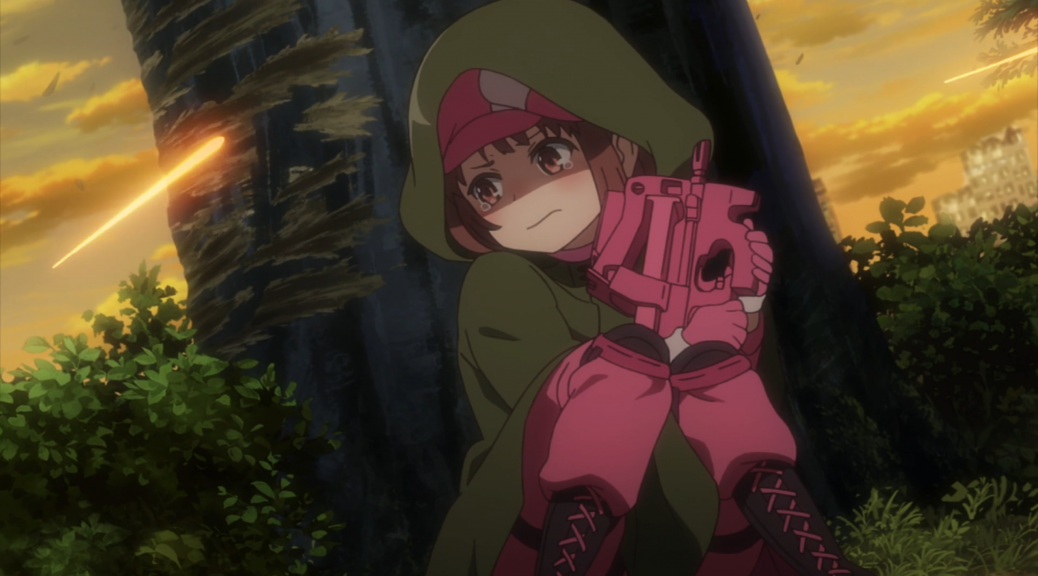 This episode was well done overall– the atmosphere was almost palpable, the action was exciting, we’re left with some intriguing questions about the characters. and so on and so forth. I have a fundamental problem with the Gun Gale Online setting though, and it’s kind of a deal-breaker.

Think about it: in the SAO continuity, in the post-“death game” world, there are a nigh-infinite numbers of MMORPGs people can play. These games have magic, fantastic creatures, beautiful scenery of the kind that it’s very difficult, if not impossible to find in real life, and even amazing features like fully-VR flight. I don’t understand why, when presented with this buffet of scrumtious RPG delicacies, people would choose to play GGO: the game where you get to experience what it was like to be fighting insurgents in Fallujah circa 2007. It’s just a dank, depressing setting, and I don’t know why anyone would spend time there if they didn’t have to.

I guess it comes down to the allure of playing around with guns for people who never get to play around with guns; after all, I was already bored of hanging around the rifle range by the time I was 14. Nevertheless, whatever the reason, I just don’t see the appeal. 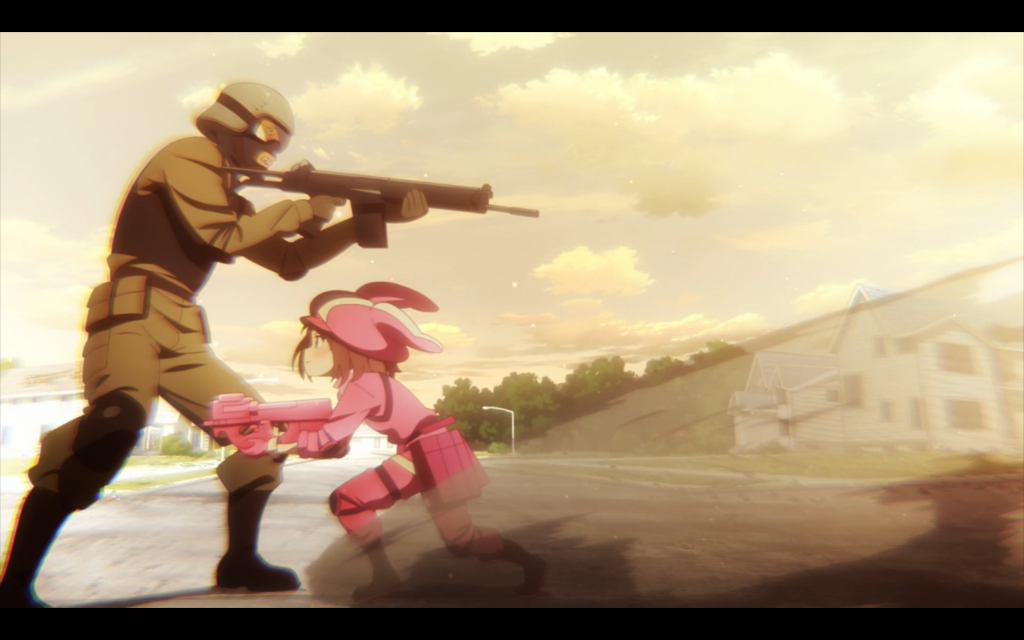 LLENN’s winning strategy is to be so much shorter than everybody else that they’re usually not aiming down far enough to hit her. I wonder if this is going to keep working as she gets more notoriety in game? You’d think eventually, GGO players would just be like “when in doubt, aim waaay down.”

And yet, despite my lack of interest in the game world, there are things that make me want to keep watching. It looks like LLENN’s player, Karen (woo, that’s my name!) has a very different lifestyle than you would expect of a hardcore PVP MMO player, and I’m interested to learn more about her. Plus, I have no idea why LLENN and her teammate were competing as a duo when everyone else in the Squad Jam seemed to be in groups of six, and that’s intriguing. Then there’s LLENN’s super-speed, which, according to the reaction of the other characters, isn’t a normal thing in GGO and may be the result of some secret behind the LLENN avatar that she might not want her fellow gamers to know about.

It’s just, if they were going to make an SAO spinoff with this much potential, why did it have to be centered on Gun Gale Online? What’s wrong with Alfheim? I like Alfheim. You can tell Alfheim is better than GGO, because Sinon was huge into GGO, then she was invited to play ALO and was like “it’s been real, fellas” and booked out of there. Trust Sinon, she is a smart young lady.

Oh well. Looks like I’m interested enough to keep watching this show, at least for now, but whether or not I do anymore pontificating about it on this blog probably depends on how they develop Karen, more so than LLENN. Maybe it’s just narcissism on my part, but I’m really curious to learn more about her, and if her real life is interesting, that might cancel out my general antipathy towards the setting.