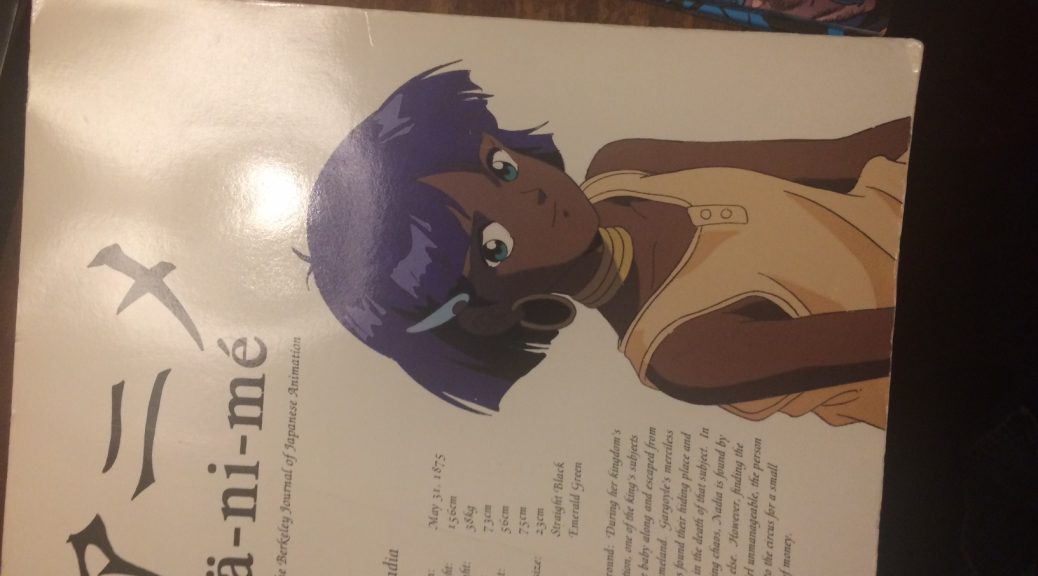 At a local comics store recently, I found something totally unexpected on the shelves: a used copy of Anime: The Berkeley Journal of Japanese Animation, Issue II. It’s a magazine from 1991, published by a Berkeley-based anime fan club, with a lovely picture of Gainax’s Nadia on the cover. The book is mostly comprised of episode scripts and summaries for Nadia and other contemporary shows, so it doesn’t have a whole lot of value as a magazine (no fascinating articles on anime from an early-’90s perspective), but it was such a cool little piece of anime history that I had to pick it up.

I’m assuming the reason why the book is mostly scripts is because the fans who read this journal were watching Fushigi no Umi no Nadia on raw VHS, taped off of Japanese television, and needed the scripts and/or summaries to follow what was happening on screen. That got me thinking about how much danged work it was to be an anime fan back then; anime didn’t show up to your house, you had to go to it. You had to go to club meetings, to watch grainy copies of a show on a tiny screen in a foreign language with no subtitles, and the only way you could understand what was going on was if you followed along in your guide, which needed to be specially designed and printed by other fans.

And the fans who made these zines and attended these viewings were the lucky ones, because at least they had access to something; in most of the country (basically anywhere that wasn’t NYC or California), the only option was to buy tapes for $34.95 for anime that had come out years ago. This was one instance where geographic privilege was very powerful, because only people on the coasts were likely to even see a show like Nadia anywhere near the time it aired on Japanese TV.

Compared to now, obviously it’s like night and day. I can load up Crunchyroll or Netflix and gain access to more anime than I could possibly watch; not just the old classics that have gained popularity in the West, but most of the same shows that are airing in Japan now. If for some reason you don’t like streaming media, you can buy anime box sets on DVD and Blu-Ray for a fraction of what anime used to cost decades ago, and the visual and audio quality is vastly superior. We are living in an Otaku Paradise…okay, the fact that CR now has something close to a monopoly on anime streaming is not good for consumers, but nevertheless, compared to 1991 we are living like royalty.

And yet, I can’t help feeling we’re missing out on something. When you have to work that hard to do something, you invest in it more, and therefore get more out of it. The Berkeley journal era was before my time as an otaku– I was still into original My Little Pony and She-Ra: Princess of Power back then– but later on, during my teen years, there was still a much higher level of risk involved in being a fan. Anime tapes cost $29.99 or $34.99; when I went to the store, I could only afford to buy maybe one, and it was a serious decision. And if I bought an anime I didn’t like, well, by the time I’d finished watching the tape to death, I would have found something I liked about it. I’d invested way too much in anime to just watch the tape once and throw it in a drawer somewhere.

Still, when I did buy a tape and bring it home from the mall, there was that bubbling excitement; I got a new anime! A whole new anime, maybe even with multiple episodes on it! My anime collection was increasing! There’s nothing like that excitement today; partially because I’m old and jaded, but even young fans don’t feel that same sense of excitement that I once did if they have access to nigh-unlimited streaming anime, I don’t think. I don’t see how they could.

I need to be careful here…it’s true that when you have less, you appreciate it more, and that’s the phenomenon I’m talking about. Yet that comes dangerously close to saying “things were better back when they SUCKED,” which is just stupid. I wouldn’t want to go back to the time when I spent $30 for one episode of the Oh! My Goddess OVA, no matter how excited I was to bring that tape home. No, things are better now, but I don’t think any of us are quite as invested and passionate in anime as fans were circa ’91, or even 2000; it’s just not possible. It’s become too easy, too automatic to watch new brand-new anime.

What I’m wondering now is if there’s any way we can somehow nurture the same passion fans had back when anime was a scarce, precious resource, but without making people jump through ridiculous hoops to cut off access. I mean, I suppose you could make some kind of “Old School Anime Challenge,” where people could opt-in to try to live like an old-school fan for a while and only watch one (raw) show per season or something*, but that seems more like a silly exercise in masochism than anything else. Unless some cataclysm destroys the internet and sends us back to the VHS-and-Betamax days, we can’t return to that time.

I was kidding in the title of the post about how we should make it harder to be an anime fan; obviously, we don’t really want to do that. But I think we should maybe be less forgiving of those who take anime for granted; those “fans” who talk about how every show sucks, how in general anime sucks, how people who are really into anime suck. Obviously, these people have the right to watch anime if they want (although why they even want to, when they apparently have such a low opinion of it, is an open question). But we don’t have to take their opinions seriously either, which is what we’ve been doing for the past 15 years or so.

I don’t really have a plan here. I’m going to be thinking about ways to be more passionate and appreciative as a fan, the kind the Berkeley Anime Club would have recognized, without going to another extreme and becoming a completely non-critical anime zombie. If opening your browser to watch all the latest anime from this season has started to feel more like a chore than a privilege, maybe you should give it some thought too. It could be that you’d be better off watching less anime, only spending time with the stuff you really love, or maybe you could try to have a different perspective on what you’re already watching.

All I know is, this feeling where anime is cheap and disposable is icky and I don’t like it. I’m not going back to hoarding VHS tapes, but I’m going to try to act a little bit more like the person who thought that spending all of her babysitting money on anime tapes was a good idea.

*Only if you live in NYC or California though: if you live anywhere else in the world, you will watch reruns of Golden Girls and you will like it.

4 thoughts on “Being an Anime Fan is Too Easy Now; Let’s Make it Harder”