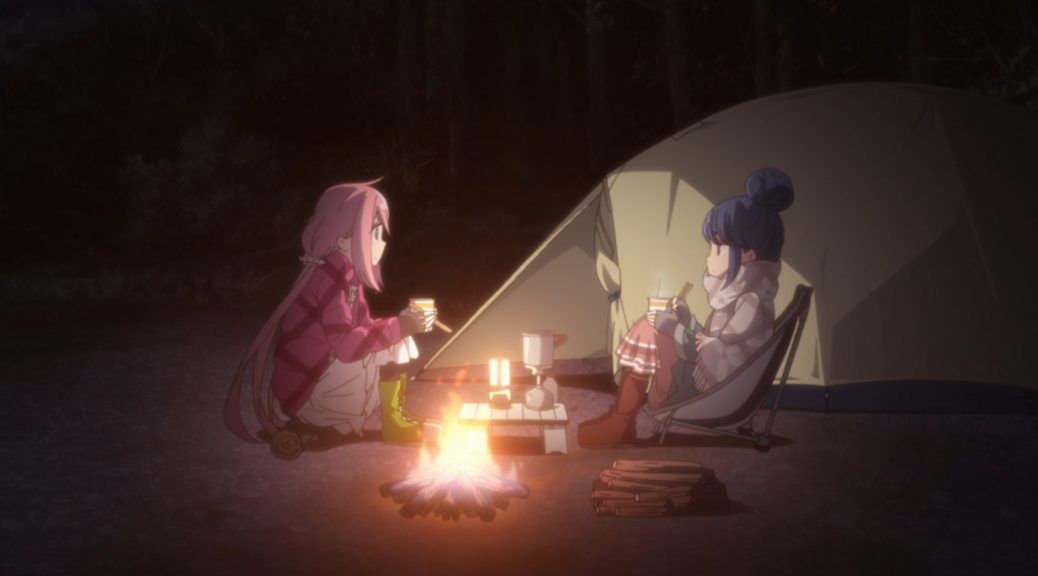 It still kind of takes me by surprise just how much new anime there is each quarter. You’d think I’d be used to it by now, but when I look at Crunchyroll’s list of updated titles at the beginning of the season, I find myself saying “Wait, that’s out? And that’s out? And that too? These are all airing this season? They’re using up all the anime, there won’t be any left for next season!” Apparently it doesn’t work that way. 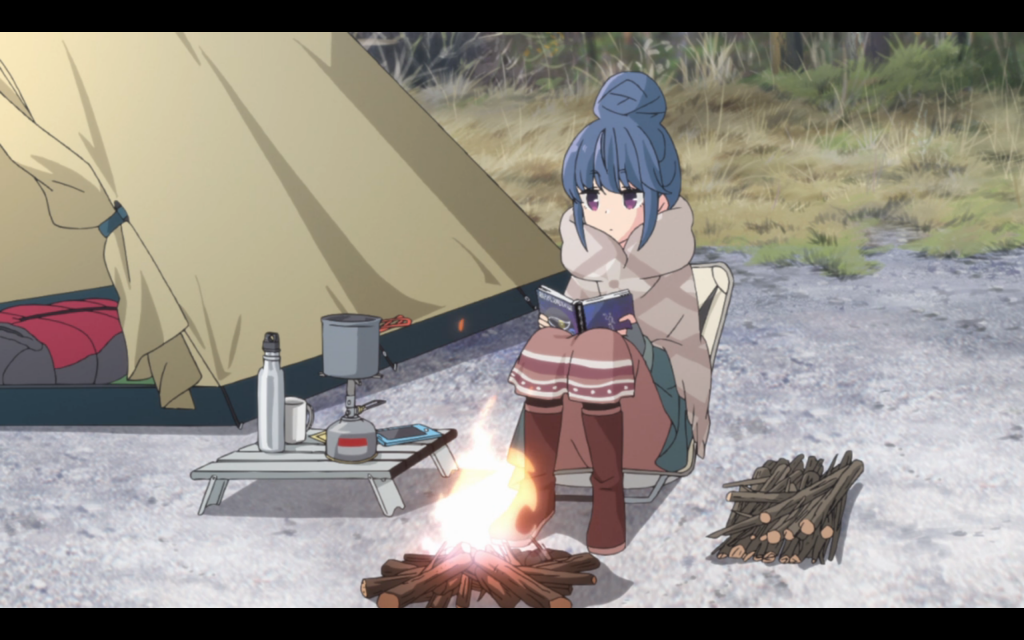 Laid-Back Camp— My overriding thought concerning this show is “Hey, I’ll bet I can get my Dad to watch this with me!” which makes it hard to focus on much else. Still, I think there’s a little bit of a conflict here between the comfy, relaxing mood the show has going on and the inevitable cute girl antics.

Whenever main gal Rin is out camping, looking at the beautiful scenery, you feel like you can smell the smoke from the campfire, feel the warmth of being all bundled up in long underwear and sleeping bags, and the bracing, invigorating chill of cold, clean mountain air on your face, and it’s just lovely. It’s experiencing the best parts of camping without having to deal with bugs and dirt. Then the other girls come on and act quirky or whatever and you kind of want them to just shut the hell up and let Rin camp in peace. However, this is clearly a deliberate choice (especially because even Rin herself acknowledges it), so I have hope that the show is going to get better at marrying it’s soothing elements with it’s genki-girl shtick. 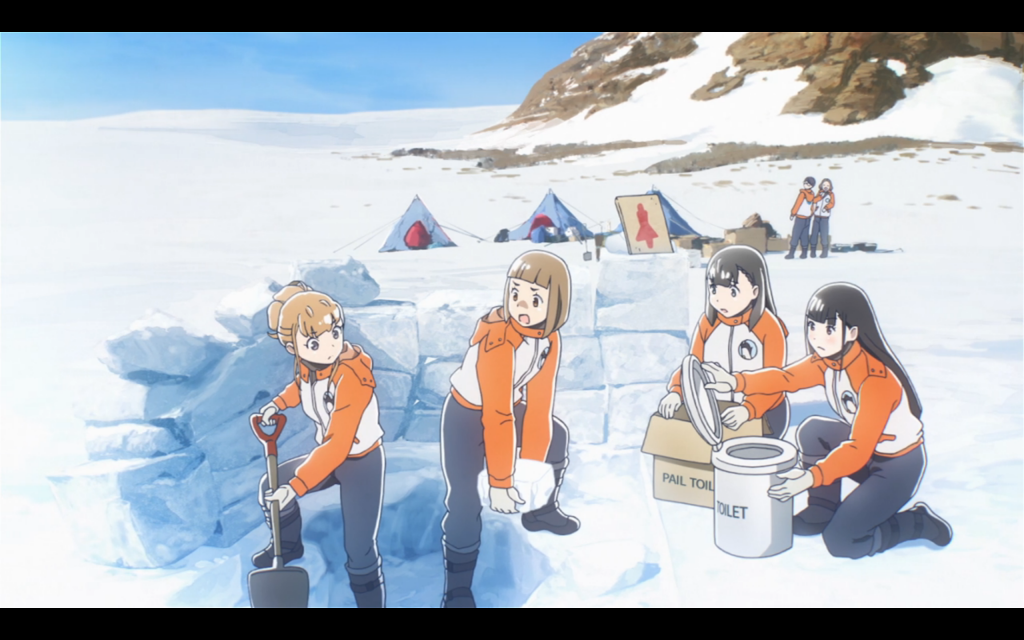 A Place Further Than the Universe—  As much as I dislike icy roads, single-digit temperatures and having to deal with piles of snow, cold-weather tourism has a huge romantic appeal to me. I’ve read all about the Ice Hotel in Sweden, and the idea of going to Lapland, Iceland, or even Greenland, is something I think about often. Unless I get over my huge fear of flying, I’m never going to get anywhere near that whole region, but hey…there’s nothing wrong with imagining it.

I’ve never really felt a pull to go to Antarctica though. Penguins are awesome and all, but I think the fact that it’s just so remote is what renders it unappealing to me. If you go north, even pretty far to the north you’ll still find cities and towns where people live, albeit sparsely. There are no towns in Antarctica; I mean, maybe I’m mistaken, but unless I’ve missed something in the past ten years, no one goes to Antarctica and comes back raving about what great restaurants they have there. It’s something apart from human culture, like the surface of the moon.

This show is almost in my wheelhouse, since I relate to the wanting- to-go to-a-mysterious-far-away-cold-place aspect, but I’m having trouble getting psyched about the girls going to Antarctica in particular. So far it’s well-written and well-produced, with the chase scene in episode 2 a particular stand out, but I’m not completely sold yet. I think the test of whether this show succeeds will be if I start to find the idea of going to Antarctica exciting myself, instead of just wishing the show was about a group of girls going to northern Finland. 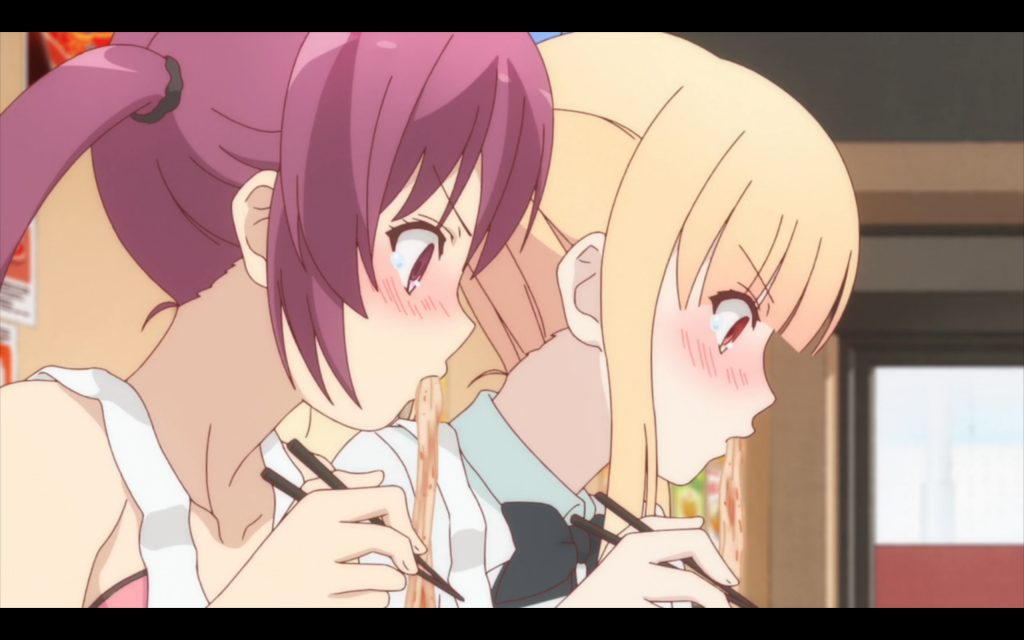 The first episode was pretty dull, but after the second, I think I might be on board Ms. Koizumi’s little train here, perhaps against my better judgment. The characters are better defined than they usually are in this type of show, and there’s more nuance to the world of ramen than noodle-neophytes might think. At first I couldn’t imagine how they were going to get 12 whole episodes out of this concept, but now? I think I get it. The show is trying to do something pretty simple (decent character interaction +constant ramen facts!), but what it sets out to do, it succeeds at…I think? Maybe I’m just giving it a pass because I’m hungry.

Who am I kidding? I’m a vegan now and the only way I get to enjoy meat is when I watch anime characters eat it, so I’m going to watch all 12 episodes of Koizumi stuffing her face with pork-and-chorizo ramen, then I’m going to watch it all again. If you can actually eat ramen in real life, you probably have little use for this show (and I’m trying very hard not to hate you right now), so keep that in mind. 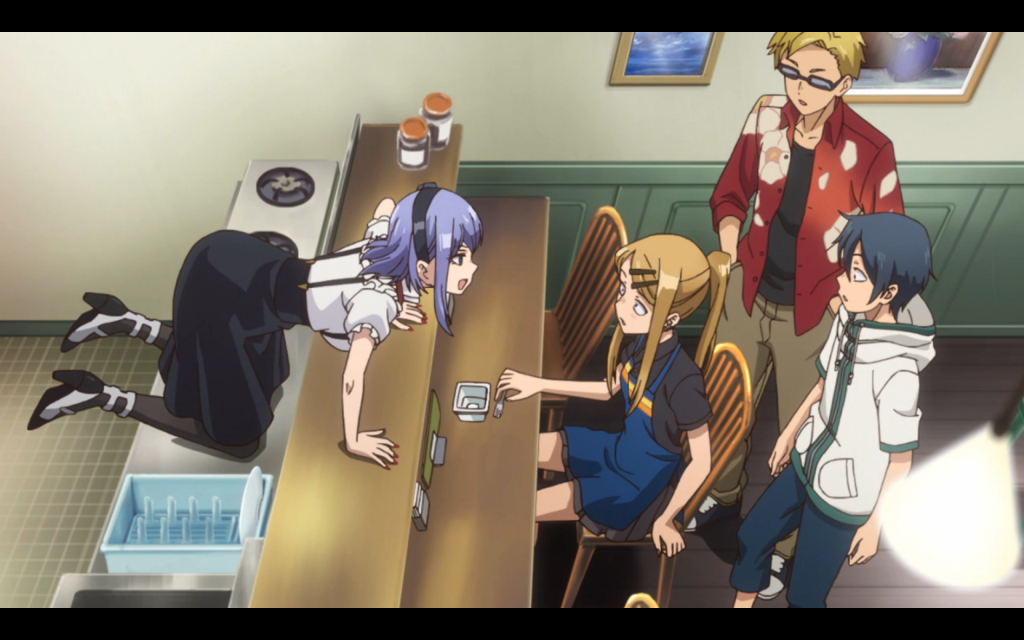 Dagashi Kashi 2— Speaking of food shows that shouldn’t work, here we have a second season of Dagashi Kashi, the show about cheap candy and snacks that usually don’t look very appetizing. At least the Japanese audience has nostalgia for these products, but for foreigners, we lack that powerful childhood connection. In theory, the show doesn’t have much to offer the international audience.

And yet, I found the first season of this show absolutely delightful two years ago. Maybe it’s the characters; maybe it’s the fact that I want to live in a world where penny candy could possibly make anyone this happy. For whatever reason, they could probably make  12 seasons of Dagashi Kashi and I’d be cool with it. I was a little concerned with the change to half-length episode format, but if anything, cutting down the running time seems to have improved matters; they have just enough time to freak out over the latest fried octopus flavored gobstopper or whatever, then it’s on to the next thing.

I feel like I should have some sort of comment on the change to Hotaru’s design, but honestly? Unless I’m looking at screenshots side-by-side, I can’t tell the difference. So sue me. 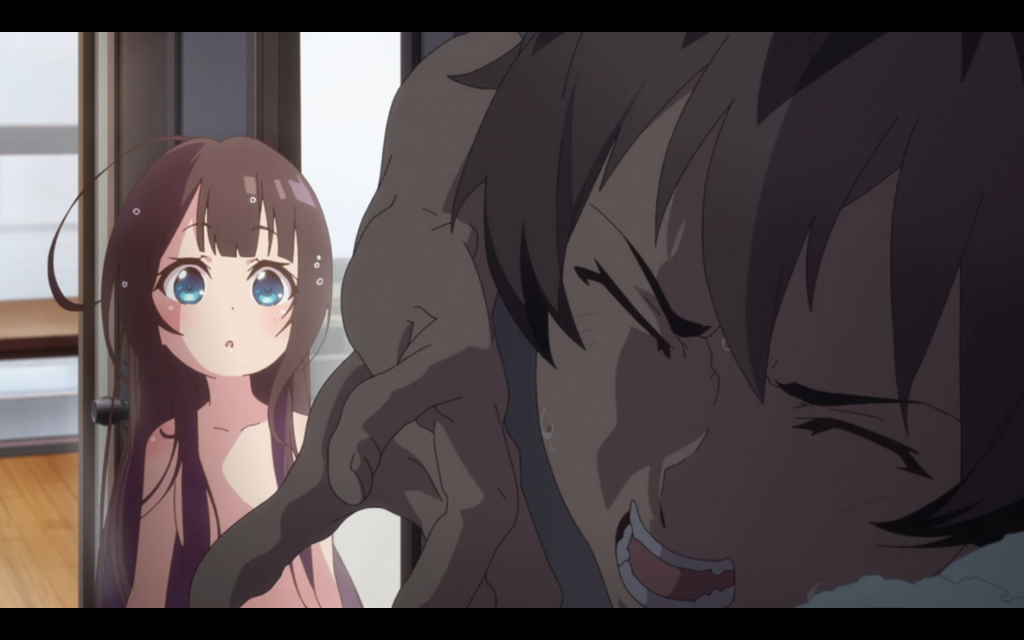 The Ryou’s Work is Never Done!—It has to take a certain amount of chutzpah to put out another show about shogi during the same season as March Comes In Like A Lion, right? I mean, let’s face it, even if Ryou does really well for itself, it’s always going to be “that other anime about shogi with cute girls in it.”

Hey, speaking of lolis, who else remembers the original Lolita, a.k.a. Dolores Haze, lust object of one Humbert Humbert? And how the genius of Lolita is, even though a child is raped every day from the age of 10 onwards, the reader is seduced by Humbert to some degree, and thus is made to feel somewhat complicit in Lo’s situation? So that, at the end of the book, while you’d like to just write off HH as a total monster that you have zero sympathy for, you just can’t, and that opens up a Pandora’s box of uncomfortable questions?

I’m not trying to argue that this show, or any of its contemporaries are on an artistic par with Lolita; that’s ridiculous, and also not the point. The point is, we have all these shows with “lolis” in them, named after a character in the most deliberately, brilliantly offensive and disturbing book of all time, and people are still complaining that these “loli”-themed shows make them uncomfortable. Shall we also complain that swimming pools are too wet, deserts too dry, Godiva truffles too chocolatey?

I don’t plan to continue watching this show, since Lion provides all the hot shogi-explaining action a girl could possibly need. But I find the dialogue surrounding it kind of sad, and it’s only going to get worse once they do a beach episode or something. Get ready for “But real 9-year-old-girls wear bathing suits just like one Ai was wearing all the time!” “Yeah but that DOESN’T MAKE IT RIGHT!” and so on and so forth. Ack. 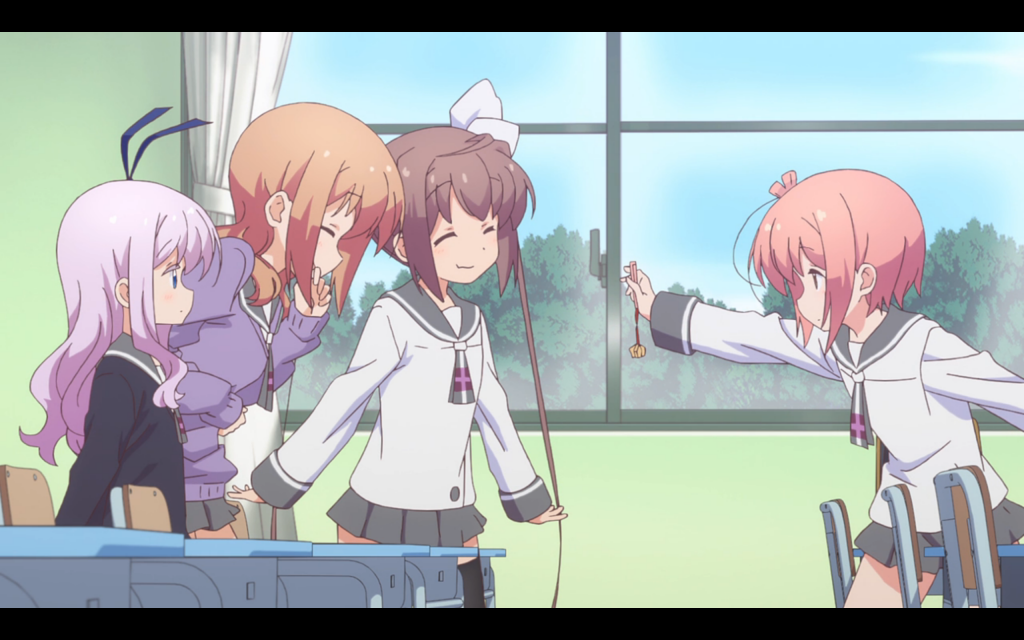 Slow Start— This is an interesting experiment in just how minimal an anime premise can be before it ceases to have any premise at all beyond “cute girls are friends.” The hook here is that the main character missed her high school entrance exam and had to take it the next year, so she’s secretly one year older than everyone else in her grade. She’s trying to hide it, but considering that this is perhaps the least juicy dark secret anyone could possibly have, it’s hard to feel invested in what’s going to happen if anyone finds out.

It’s not bad; if you find it soothing to watch cute girls eat boxed lunches and do sports and stuff, this show has that. There’s some humor, and some maybe-they’re-really-lesbians teasing. The animation is above-average, at least so far. It’s just that there’s really no reason to recommend this show over pretty much any other show that features girls in a school setting. Three Leaves, Three Colors didn’t really have much of a premise beyond “girls are friends,” but made up for it with characters who were really fun to watch. I don’t think Slow Start has that, which is a bit of a shame. 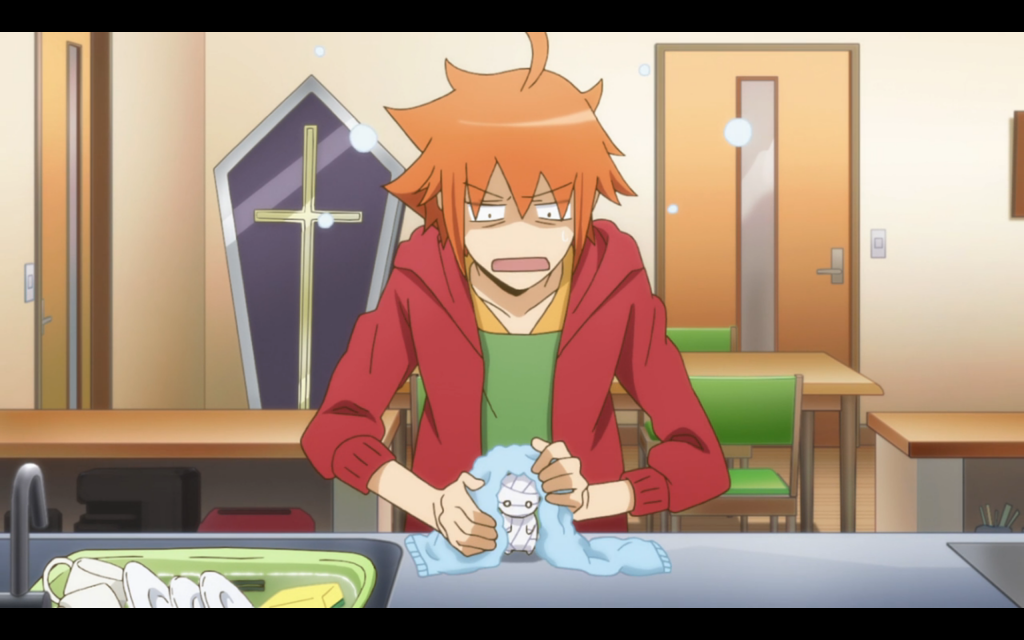 How to Keep A Mummy— I had no idea this show existed until I saw it on Crunchyroll, and I’m glad I fell over it. It’s about a tiny little mummy creature who’s incredibly cute, and you just want to go “awwww!” and hug him about 100 times in the first episode. It’s possible this trick will get old, but I’m a sucker for tiny little cute things and will probably keep saying “awww!” throughout the entire season.

However, based on the OP, there will be more monster characters, so the show should have a lot more going on than just cuteness appeal. I would say moe appeal, except Mii-kun barely even has eyes, and I’m not sure if it counts as moe without big eyes. I need the International Moe Council to revise their guidelines on this.

So, what do you guys think of these seasonal posts that cover a whole bunch of anime at once? I know that for SEO purposes, I’d be much better off doing a separate post for each show, but never in my life have I done anything that’s good for SEO; why start now?

Okay, I shouldn’t joke about that, MAYBE doing things to improve the visibility of my blog would be good, but for now, I like my stupidly impractical 2000-word posts. Life is hard, let me please have this one thing?