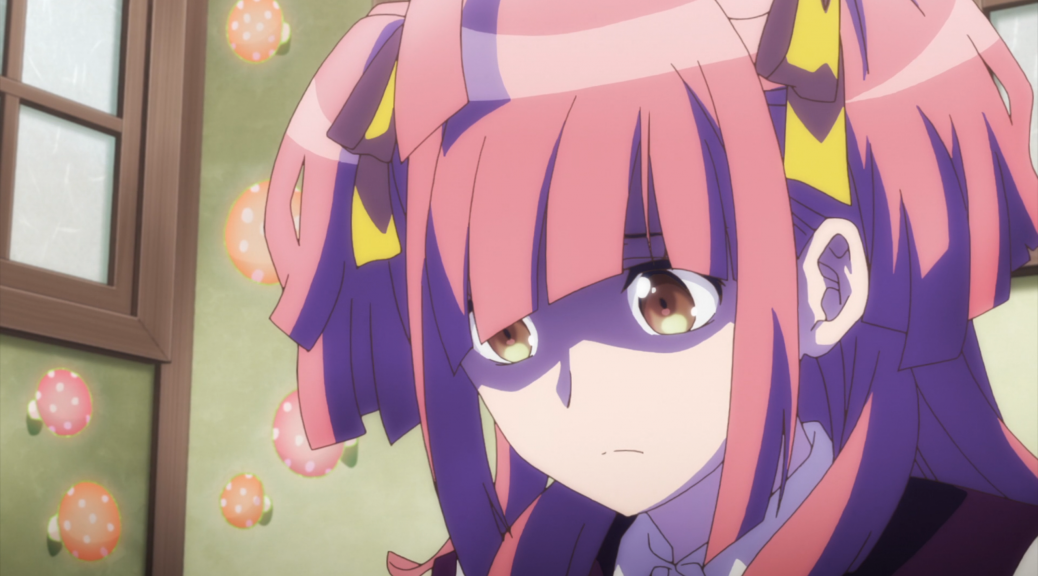 After a season or two of not really feeling it, I was really into anime this season. Not only did I watch a bunch of shows to completion, there were a bunch I wanted to see that I just didn’t have time for; hopefully, I’ll catch up on them soon. I promise I’ll get to you, The Ancient Magus Bride.

I wonder: was anime really good this season, and that’s what pulled me back in? Or is it an entirely cyclical thing, and my biological clock just has an “anime addict” setting that got switched on again sometime around October 2017? I guess I’ll never really know. Isn’t it cool that even when you start to get old, you still don’t understand why you do any of the things you do? Keeps life interesting, right?

Ahem, anyway, I already put down some thoughts on Recovery of an MMO Junkie, Urahara and Girl’s Last Tour over the past few weeks. Here’s a roundup of the rest of the lot.

Animegataris— What a strange animal this show turned out to be. At first, it was a show all about the experience of being a student anime fan, kind of like a poor man’s Genshiken (or a rich man’s Genshiken, if you happened to prefer these characters.). There were teases that some strange supernatural stuff was going on in the background, but it was still pretty grounded. Then in the last third, the show went super-meta and became about anime characters becoming aware of the fact that they were really anime characters, and it was just…wow. I mean, saying that the show “broke the fourth wall,” would be a massive understatement; it’s more like, there’s only the faintest sprinkling of plaster dust left somewhere near where the fourth wall once stood. That wall got fucking vaporized.

It was a fun ride, but it wasn’t exactly coherent. While the show did drop numerous hints that something odd was up from the beginning, I’m not sure that the hints dropped actually matched up with the bizarro ending that we got. It felt more like the creative team knew they wanted to do something different with the last few episodes, but didn’t decide what they were actually doing until the very last second. I definitely got the “we’re making this up as we go along” vibe at the end, and maybe that’s okay?

Still, personally I think it would have been stronger if it had all felt planned out from the beginning. I’m a stickler for Chekhov’s gun on the fireplace; in this case, there wasn’t a gun on the fireplace, there was a banana-cream muffin, then somewhere around episode nine the show goes all like “look at this MASSIVE GUN that’s been on the fireplace the whole time!” and I’m like “Shut up, you have muffin all over your face and now you just look stupid.”

Did that make any sense? No, of course it didn’t. And that, perhaps, is the genius of Anime Gataris, and why I still kind of recommend it despite the fact that it was all over the place. We just don’t get these kinds of crazy, disjointed experiences that often, in anime or otherwise– at least, not intentionally.

A Sister is All You Need— Another strange bird that had it’s moments, but didn’t quite know what it wanted to be. It did a good job of balancing the fanservice and lewd humor with some genuinely insightful and poignant moments, but I wonder if it really went far enough in either direction. Despite the frequent fanservice, I don’t think the show wasn’t really ero enough to appeal to the audience who were watching it primarily for that reason, and the emotionally resonant moments, while powerful individually, didn’t seem to amount to much by the end of the show.

The ending did provide some closure, but not enough to make the experience feel complete at 12 episodes. It was a “here’s juuuuuust enough closure so you’re not pissed as hell at the writers, but we sure hope we get a second season!” kind of ending.

At the beginning of the season, I was hoping that this show would break down the trend of little sister fetishism and explore why some otaku develop this particular obsession, rather than just reveling in it, and to be fair, I think the show really did start to do that. It just feels like they went about halfway there and then ran out of episodes. I’m torn between wanting a second season so they can finish the job, and feeling like they actually had enough time to do it in 12 episodes and shouldn’t have wasted so much time on filler.

All that said, if you’re a writer at any level, this show is worth watching for how spot-on it is about writers and all their various insecurities. That’s one thing this show did better than perhaps any other anime I’ve seen, and that’s kind of impressive for a show that so many people wrote off completely based on its first episode.

Blend S— This started out really fun, but it seemed like the creative team didn’t know how to fully take advantage of the premise. About halfway through the show the characters started taking frequent field trips to anywhere but the cafe, which felt like a waste, since all the funniest stuff always happened at the shop. In theory, they could have gotten a lot more jokes out of Maika’s “accidental sadist” character, as well as the other waitresses’ quirks, but it seemed like the writers just ran out of ideas way too early.

I know there was some talk about the age gap between the two love interests (Maika and Dino, the manager) being too big, but honestly, I was so focused on the show’s diminishing laugh value as it went on that I hardly noticed. I mean, yeah, there’s at least a 10-year age difference there and that’s generally not good, but both characters have the emotional maturity of a wet sponge, so does it really matter much in this case? I’m having trouble worrying too much about poor, innocent Maika, demon-faced scion of aristocrat millionaires, being taken advantage of by the world’s most clueless small business owner.

Some fans really liked this one and are hoping for a second season, and judging on how popular memes and fanart for this show were online, it seems like there might be enough demand for another round of Blend S. If they do make more, I hope they take copious notes from Wagnaria and make better use of the cafe setting instead of trying to run away from it. Because if we get another season that was like the second half of this one, that sounds so boring that even I might skip it…and you know how I feel about shows that take place in coffee shops.

Food Wars: The Third Plate— Perhaps the last thing I expected from this show was for it to get political, but it just goes to show that you should never underestimate everyone’s favorite show about panty shots and experimental gastronomy. Things in foodgasm-land have gotten so political, I almost wrote a post called “How Food Wars! Predicted Trump’s America,” but then decided to hold back. Because whenever I do something like that, people take it deadly seriously for about three years, and then eventually someone will drop by and leave a comment saying “Lol, nice parody,” and I’ll know that at least one person got it.

The show has gotten political in a pretty ridiculous way, considering that the main villain’s plan seems to involve turning the school into some sort of authoritarian cuisine factory, where individual goals and creativity mean nothing and all that matters is stamping out identical portions of fancy-pants gourmet food. Main villain also seems to have plans of destroying all the restaurants in the world that are not fine dining establishment, which is, err…do economics exist in Food Wars? Because I see several practical problems with that, problems which should be obvious even to an evil chef demagogue.

For some people, the show has gotten too ridiculous to be taken remotely seriously, but honestly, this show was always so inherently ridiculous to me that I don’t feel like much has changed. Now instead of the Totsuki Academy-brand of meritocracy where 90% of the student population washes out, we’re seeing the other end of the spectrum, where there can be no meritocracy because everyone is forced to be identical. I assume we’re eventually going to end somewhere comfortably in the middle, which seems like a good long-term plan for the series.

Konohana Kitan— I got really bored with this somewhere around the middle of episode 4 and dropped it. I’m still kind of curious if it was doing the whole episodic occult show thing, or it ultimately veered closer to a slice-of-life show that just happened to contain fox-eared girls and other supernatural critters, but not curious enough to actually watch more of it. If anyone out there watched it all, feel free to let me know in the comments what was really going on here.

Love is Like a Cocktail— Thanks to Chi’s amazing bust, this was the stealth fanservice hit of the season. Yes, it was a little 3-minute short that was primarily about mixed drinks, but do you really think people were watching for the recipes?

I feel like they could have done more with this, but that seems almost unfair to demand of a 3 minute show with a simple premise. Then again, I Can’t Understand What My Husband is Saying is in the same category yet seemed to make better use of its limited run time. In any case, if you haven’t seen it, it will only take a half an hour or so to watch the whole thing, so if you like booze (or boobs, or some combination thereof), you might as well.

Ame-Con!— I have tried to love Rainy Color/Rainy Cocoa and its spinoffs, and I just can’t do it. I don’t know if this show just doesn’t work as a 2-minute short, or if there’s no length that would work here, but something is just missing from this show. Even for someone like me who basically has a fetish for anime about brewing coffee, this show is just boring; I have no idea how they pulled that off, but it’s kind of perversely impressive. This may be the only coffee-shop anime that does nothing for me.