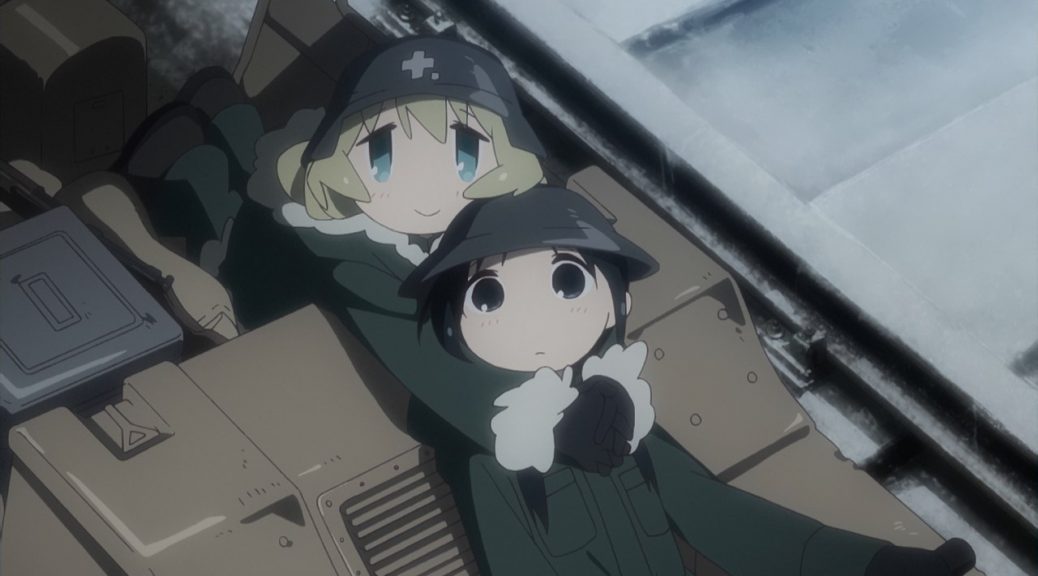 [Spoiler Warning for all of Girls Last Tour. Normally I don’t bother with spoiler warnings, but in this case, I wanted to play it safe; because if you haven’t seen the show yet, you really should watch it in its entirety before you read anything about it.]

It’s funny. Until recently I would have thought the words “bleak” and “depressing” were synonyms, but after finishing Girls’ Last Tour, I have my doubts about that. Because while the show was incredibly, unrelentingly bleak, I never really found it depressing.

I guess the difference lies in whether or not there’s a sense of wrongness, a sense of “should”– when things should be different than they are, should be better than they are, that’s depressing. In GLT however, there’s a sense that everything that’s happening is inevitable, and there’s nothing wrong with that; it’s not good, it’s not bad, it’s purely neutral. It’s the end of all life on Earth, God is in his heaven and all is right with the world, and so on and so forth.

Usually with this kind of post-apocalypse story, it’s meant to serve as a cautionary tale. “Don’t make these mistakes; don’t let humanity end like this.” And you can make the argument that GLT is the same way; the video montage in the last episode, which makes it clear that the kick-off for the apocalypse was a war initiated by Japan, implies that. However– and I freely admit this could just be me– I didn’t get the pleading “don’t let this happen to your world!” feeling from that sequence. I get the impression that, if Japan hadn’t started the war that led to the end of humanity in this continuity, it would have been somebody else. Maybe it would have been 100 years later, even 1,000 years later, but still, it was going to happen.

To be honest, I’m having a hard time processing a show about the end of humanity that doesn’t seem to be warning against it like it’s a bad thing. There’s a kind of comfort there; maybe, some things are just out of our control. Maybe getting all caught up caring about geopolitics is a fool’s game, and eventually, it’s going to be Chito and Yuuri, or some people very much like them, scavenging the ruins of old munitions factories for abandoned rations, no matter what we do. Then you can just stop worrying about nuclear holocausts, or international pandemics, and all that terrifying horrible shit, because it doesn’t really matter which one ends up being the culprit; the end result will be the same.

I hadn’t given this any thought until recently, but when it comes to “the future of humanity,” most people seem to be kind of stuck between considering two possibilities. One is the “we’re all going to die, because we suck and we deserve it,” Planet of the Apes scenario; our greed and stupidity gets the better of us, and we take ourselves out before our time. The other possibility is the Star Trek-style post-scarcity world, where scientific advancement has solved a lot of our practical problems, and the whole nature of life in the universe (human and otherwise) takes on a very different character. The world of GLT is certainly a lot closer to the first scenario than the second, but I think it does raise the question that it could be neither.

After all, the civilization in the show has progressed further than ours, at least technologically. Maybe humanity in this show didn’t end before it’s time, but right about when it had exhausted its potential; they’d already built massive structures that reached to the sky. Maybe there was nowhere else left to build, because there was no oxygen left. Maybe the apocalypse was downright overdue.

I think that’s a really scary idea, personally; a future that just kind of meanders while we wait for something to happen. I mean, of course a nuclear holocaust is scary, but you kind of know what you’re getting with that. I wouldn’t want to live through one (or er, be murdered during one) but conceptually, you know what’s going on there. What about a world where we neither self-destruct prematurely, nor do we develop sufficient technology to solve our most pressing problems? We just keep existing, keep having the same basic problems, over and over, in gradually more sophisticated housing units, waiting for a dramatic change that’s never going to occur?

Can you imagine if, 5,000 years from now, we’re all hanging out in these super-futuristic houses that look like they came out of The Jetsons, only we’re still having the same exact conversations about health care and income inequality? Will there be enough good stuff left to watch on Netflix for life to still be worth living at that point?

I’m getting kind of far afield of the show, which is the danger when you talk about any show that’s really worth talking about, I guess. But to return to GLT more specifically, what makes the show especially bleak is the fact that no one on the show believes that any kind of civilization is desirable, or possible. When Chi and Yuu run into other people, as they sometimes do, you’d expect them all to get together and pool their resources; maybe work together to try to build a new life for themselves in this mostly-empty world. But they don’t stay together, because they don’t see any point to it. You get the impression that maybe 100 or so years ago, the survivors of war tried to get together and start a new, peaceful civilization, only for that to end in a bloody conflict that killed 90% of the remaining human population, and now no one has any faith in human cooperation whatsoever. Chi and Yuu are perhaps the great-great-granddaughters of the last person who actually believed that there was merit in humans working together. Even the partnership between the two girls is tenuous, at times; the girls depend on each other, and obviously love one another, but it’s made clear in the first episode that complete trust is off the table. 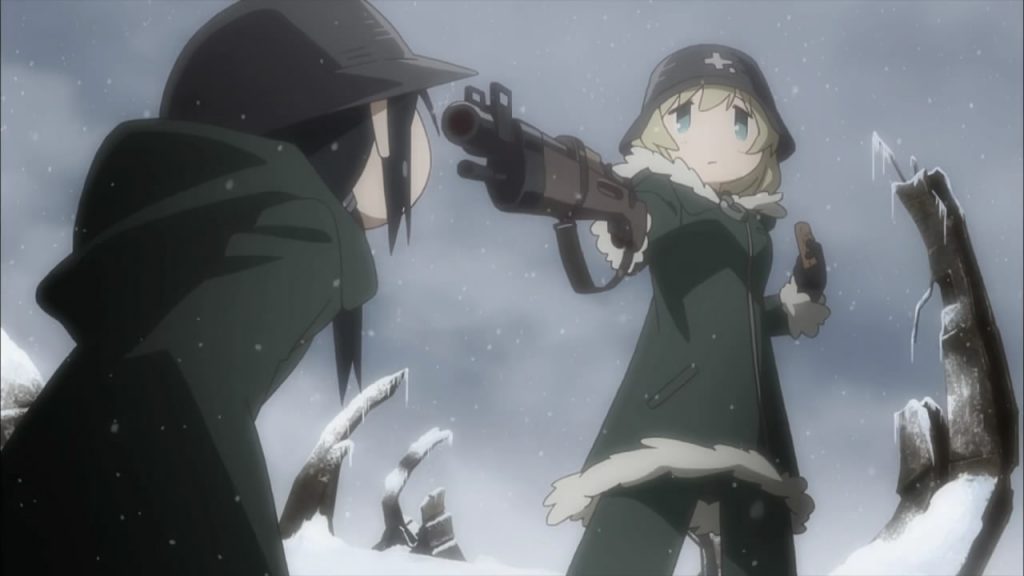 Girls Last Tour isn’t a perfect show; sometimes, I think it’s too on the nose for it’s own good. After watching an entire episode of the girls scouring old military bases for food, I really didn’t need Yuu to say “If only people back then had made fewer weapons and more food, we’d be in better shape right now.” The staff of this show seems to have decided from the beginning that subtlety just wasn’t something they were interested in, and I have mixed feelings about that. On the one hand, in a story where 99.99999999999999999% of humanity is already dead, what is there to be subtle about? On the other hand, some things are more powerful if left unstated, and the sometimes the girls drain the power out of a scene by spelling out what it’s about in so many words.

Even so, I can forgive all that for that one scene where the girls fall over some beer, get tipsy and start dancing. That moment, and other moments when the girls discover simple pleasures– the music of rain, the taste of a freshly-grilled fish– are what give the show it’s odd mix of unrelenting bleakness and life-affirming joy. That shouldn’t be possible, right? If we’re sharing the girls’ joy as they dance, then that’s a happy moment, and thus a break from the bleakness, in theory. But I don’t think you can ever really separate the girls’ pleasure from their dire circumstances. In the dance scene, for example, I was worried that a drunken Chi was going to accidentally push Yuu over the edge of the platform to her death, only to realize that even if she did, would it matter? She would be saving her from a death of slow starvation, the most likely end for both of them.

I felt gutted after watching episode 12 of Girls Last Tour. I know the manga is still ongoing, and with the revelation that the contents of the highest level of the city are still unknown, anything could happen. Conceivably, there could be a group of survivors on the highest level who’ve hoarded enough food to last for decades, and the girls could be welcomed into a whole new life. But I don’t believe that’s what will happen; that would feel like a cop-out to me, even though there’s no logical reason why it should be. I feel like I just witnessed the final activities of the last two humans on Earth, and having the story reveal itself to be anything less extreme than that, any less brutal than that, would feel wrong on a level I can’t really articulate.

And yet, once again, I’m not depressed. I’m not depressed because even though the characters on the show have given up hope for civilization, I haven’t yet. Maybe I will someday, but as of now, it’s still up in the air. Just because I’m afraid of what might happen in the future doesn’t stop me from being able to imagine the good things that could happen, or the neutral things that could become good if we have the right attitude. And if the future really does end up resembling the one in Girl’s Last Tour, well…at least there’s dancing. We could do a lot worse, and I don’t know about you, but I find that pretty comforting right now.

3 thoughts on “The Comforting Bleakness of Girls’ Last Tour”