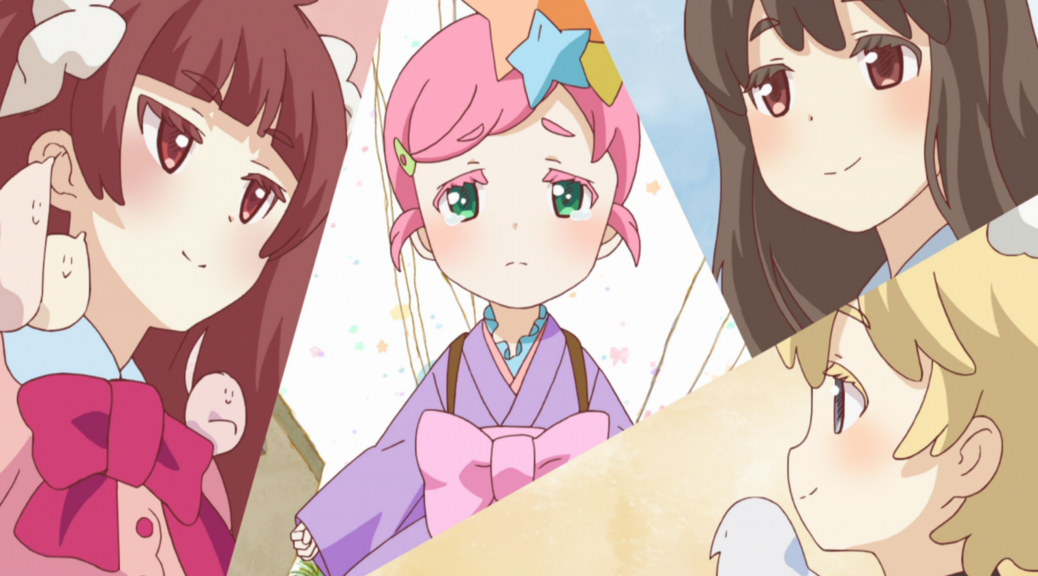 I don’t know if calling Urahara a disappointment is really fair. I could pretty much tell everything I didn’t like about it from the very beginning, and though I kept watching in the hopes that the show would get better, I never honestly believed it was going to. So I never really held it in high enough esteem for it to disappoint me. Still, watching it was a frustrating experience, because it could have been so much more.

Considering how little discussion there was online about the show as it was airing (at least in among the English-speaking anime fandom), you would think it was just a bland, boring show that didn’t have much to offer. However, there were some pretty cool ideas in Urahara; the premise of these super cute, super-competent girls protecting their Tokyo neighborhood from creepy supernatural threats, all while learning important lessons about the power of friendship, sounded like some kind of strange union of Card Captor Sakura and Durarara!!, and what’s not to like about that? That sounds like it has the potential to be one of those high-value combinations, like peanut butter and chocolate. Plus, some of the plot twists late in the show were, if not necessarily shocking, quite ballsy for their willingness to mess around with the show’s world.

In addition, this show was singled out as one to watch because of it’s largely female creative staff; it was the show that was supposed to impress on us the “importance” of women working in anime, at least according to the now-defunct Teen Vogue. And this is where things start to get a little weird and uncomfortable, because it was the whole feminine approach to things that seems to have really sunk the show.

Now, how do I explain this without sounding like an awful, self-hating woman? I mean, it’s not like having a feminine perspective, or a feminine style, is bad in any way; that should go without saying. It’s just that in Urahara‘s case, they took that whole angle so far, it started to feel like an outright parody of a feminine anime. Like, if you got a bunch of really obnoxious misogynists together, got them all hopped up on beer, and asked them “So, what would happen if we let a bunch of chicks make an anime?”, they would very quickly start describing something that sounds a lot like Urahara.

“LOL okay so like, girls can’t do math and they hate using rulers and T-squares and shit, so the backgrounds in the anime would be all scribbling and wonky, with bad perspective. And they’re lazy too, so they wouldn’t bother to draw any PEOPLE in those backgrounds., so the world would feel all dead and empty. And the character design would suck, because chicks wouldn’t be willing to make the girl chars look sexy, but they wouldn’t know any other way to make the designs pop, so every design would just be like, whatever, like why did you even bother?

“And chicks are obsessed with sweets, like cakes and stuff, so the villains would probably turn into cupcakes or some shit at the end of every episode. Oh, and like half the chicks making the anime would probably be pregnant too, so instead of having normal flavors like ‘vanilla’ and ‘chocolate’ they’d always be going on about ‘coriander sweet potato’ or ‘spicy peppermint horseradish’ or some other weird thing. Oh, and chicks can’t make decisions for shit, so instead of having a dedicated color palette, they would just use EVERY. SINGLE. COLOR. all the time, until your eyes wanted to explode–”

Ahem. Now, it should also go without saying that Urahara is not actually indicative of women’s contributions to anime; plenty of talented women professionals have been working in the field for years, blah blah blah obviouscakes. But I guess it’s kind of like a monkeys-on-typewriters situation; if you have enough anime coming out each year, and a certain percentage of them are poor quality, you will eventually get an anime that is poor quality in exactly the way a basement full of inebriated misogynists might predict, right? I guess it was bound to happen at least once.*

Moving aside from the weird gender angle, there were other problems. Considering the fact that the character relationships were about as deep as a puddle, the show was clearly going for style over substance, and there’s nothing wrong with that– certainly not in animation, where the style can become the substance if done right. However, for the style-over-substance approach to work, the show would actually need to have good style, which is where the show repeatedly failed. The pastel colors were nice, but most of the character designs just weren’t very good; the outfits looked goofy instead of fashionable, which is inexcusable in a show that was supposed to be at least partially about fashion.

This is of course highly subjective, but to me, the only really good character design on the show was Misa; everyone else, particularly the girls in their magical-girl attire, ranged from dull to embarrassing. Plus, as mentioned above, the fact that there didn’t seem to be any guidelines in regard to color (beyond “Anything Pastel is Automatically Fine”) often led to a cacophonous viewing experience.

The emptiness of the show’s backgrounds not only made the show’s world feel hollow, but actually undermined one of the story’s greatest moments. Late in the game, the Urahara girls find out that everyone they’ve been interacting with in Harajuku since episode one has been a product of their imaginations; they’ve been alone in the city this whole time. This should have been a pretty stunning revelation, but it was hard to feel anything about it at all, since it had always felt like the girls were completely alone in the city. Other characters were shown, but so few and far between that it felt like the population of Harajuku was about 6 people, so the revelation that the city was actually empty fell completely flat.

And that’s what made the show so frustrating; every good idea seemed to be canceled out by a bad one. Another plot twist, the fact that the sweets the girls had been eating were slowly turning them into the evil Scooper aliens, is pretty nifty if you think about it. Think about the Scoopers’ plan here: They planned to let the girls defeat their soldiers, knowing that the girls wouldn’t be able to resist eating the corpses of their enemies, at which point they would be reprogrammed into Scoopers themselves, giving the Scoopers unlimited access to the girl’s creativity. That’s a pretty creepy, evil plan, and it served as a nice “gotcha!” for everyone who wrote off the enemies-turning-into-sweets thing as a harmless joke.

But by the time we’d gotten to that point of the story, the characters still had yet to come alive beyond very basic character outlines, so the fact that the evil corpse-eating plan was succeeding didn’t even seem to matter. What would have happened if the girls really had turned into Scoopers, anyway? Presumably, they would have flown off with Misa and her peons, to go inhabit another pastel world that would be strangely devoid of life. There’s no feeling of urgency, even when the story is giving us reasons why there arguably should be.

All this aside, I did like the show’s message about creativity. The general “Being creative is fun and good!” vibe is hardly original, but the way this works in regard to the Scoopers is interesting. It becomes clear over the course of the show that the Scoopers (whose primary activity is stealing culture from other planets because they can’t make their own) actually do have the capacity to be creative, they just don’t realize it. I wonder, how many people have that problem in real life? How many people go around thinking “I wish I could make something cool, but I’m not a creative type of person,” and never realize that there’s nothing stopping them from taking out a pencil and paper and changing that?

The idea that creativity is as much about choice as it is an innate quality is a more unusual message, and to its credit, the show even acknowledges the important role that copying other art plays in the process of learning to create your own stuff (and does so a lot more explicitly than it deals with any other theme, curiously). But in the end, it’s still a show populated by boring characters that we don’t care about; I should be psyched wondering what kind of creative stuff Misa and her clan will come up with when they go off to explore the universe with new vigor, but I just don’t care. It feels like Misa will provide the solar system with some shiny beaded necklaces, or maybe a knitted tea cozy, and that’s nice for her and all, but it’s nothing to get excited about.

That’s the tiny tragedy of Urahara; A show about creative artists fighting aliens, who worship creativity but are unable to recognize it in themselves, filled with over-the-top action and whimsy, should have been a delight to watch, and it just wasn’t. Every season there are anime that fall short of their potential, but I feel like it’s rare to see one that had so much going for it on paper fail on so many different levels. The sad thing isn’t even that Urahara could have been good; the sad thing is that if it had been good, it would have been something really unusual and charming. It’s still unusual, and not entirely devoid of its own peculiar charm, but only a shadow of what it could have been.

*I almost wrote about this show on Anime Misogynist, but that would have required some Galaxy Brain-level, crossing-the-line-three-times shit. I couldn’t figure out how to criticize Urahara, with complaints that sounded like they came from an actual misogynist, on a site that was all about the inherent ridiculousness of using misogyny as a critical perspective. If I’d managed to pull that off, I might have ascended to a higher plane of existence and be writing to you from Ironic Blogger Heaven right now, but I am just not that awesome, and so here we are.