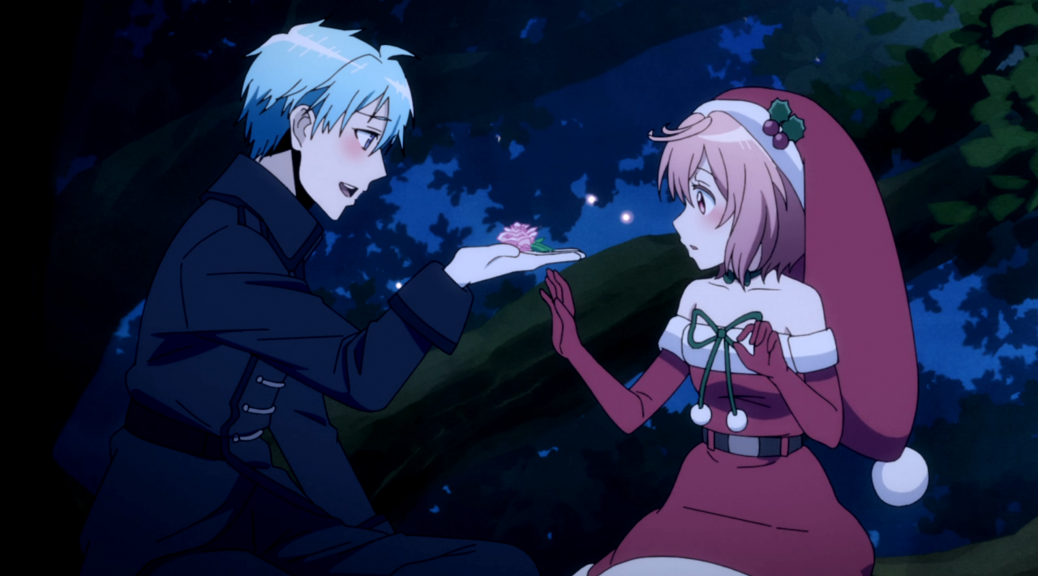 Since I’ve been watching more anime than usual lately, I figured I may as well take advantage of it and talk about the new shows like a proper Aniblogger. Here are my takes on some of this season’s offerings; keep in mind I only watch shows that are available on legal streaming services. This is less of an anti-piracy stance, and more of a “I am too goddamned old to be dealing with malware on my computer from dling torrents,” stance, but let’s all pretend it’s because of my unimpeachable moral compass. 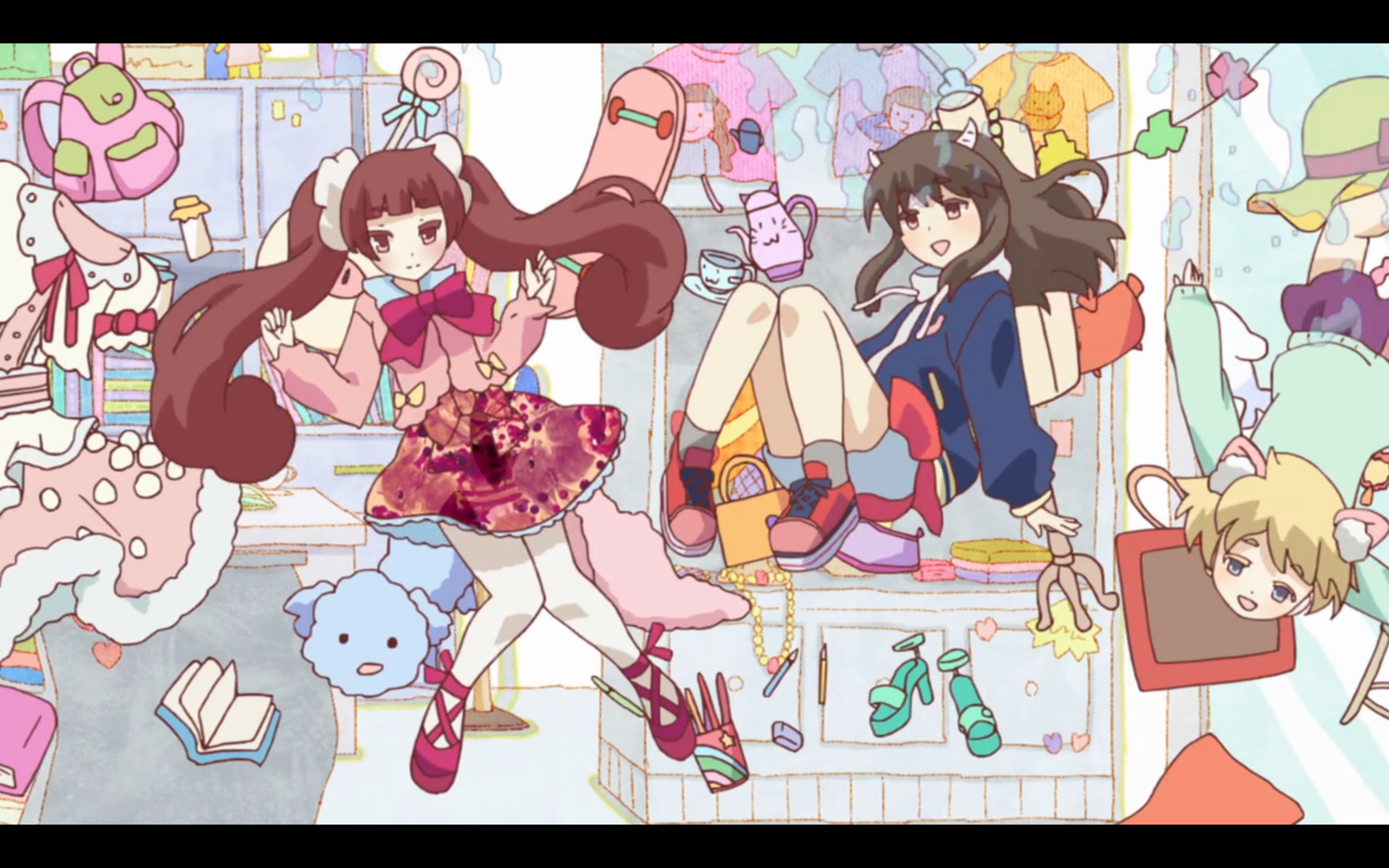 Urahara– This show puts me in a bind; I really like what I think it’s trying to do, but it’s just not working. The washed-out color palette, the intentionally wonky hand-drawn backgrounds, the surrealist feel, the enemies that turn into candy when defeated? I love all of that. But somehow the designs and the art style just don’t seem to work together, and the story has all the urgency of watching paint dry. It’s just so nonsensical that it’s impossible to care about anything that’s happening; it also doesn’t help that the magical girl designs are the absolute worst part of the show.

Right now it feels like a half-baked version of Flip Flappers, a show that often felt surreal but managed to maintain a sense that what the characters were doing actually mattered on some level. I’m probably going to stick with it, just because I like some of the things the show is experimenting with, but I wouldn’t blame anyone for bailing out; it’s pretty much an incomprehensible, silly mess right now. 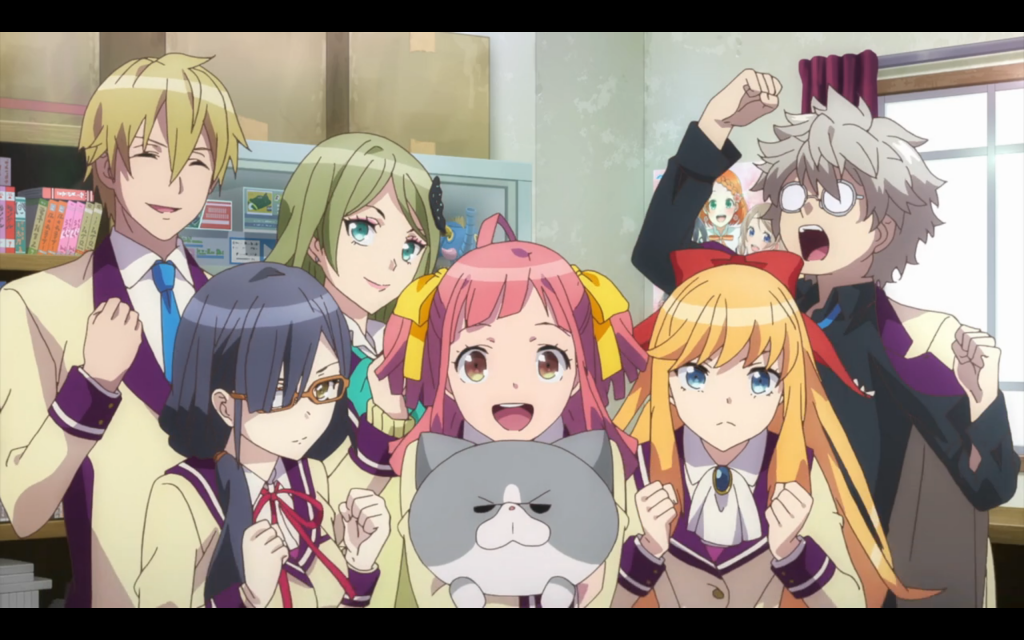 Anime-Gataris– There was something off about the art in the first episode that made me wonder if this was the studio’s first anime, but it turns out Wao World, the studio responsible for Gataris’ animation production, is prolific. The production company, DMM Pictures, is new, but I’m not sure how much that actually matters. The director, Kenshirou Mori, has relatively few credits, but one of them is the first episode of Full Metal Alchemist: Brotherhood. So, not exactly a newbie.

Normally I stay away from this kind of inside-baseball approach to anime, because I don’t know much about what goes on in production, but something about this show really made me want to try to figure out what the hell was going on. It looked like the show was made by people who had watched anime and taken a lot of notes, but had never actually made it before; there was something just slightly off-kilter about the colors, the shading, the backgrounds, etc. Even the piece of stock animation that Arisu uses to summon her butler looks like it was made in 1998. By the second episode, things had smoothed out a bit, but I’m still wondering if the weird look the show started with was a real phenomenon, or if I’m just hallucinating.

In terms of the story, there isn’t much to discuss. It’s a show about people talking about anime, so it runs on in-jokes and nods to otaku culture. The main thing it has going for it is that it’s making nods to very recent shows, so it’s more topical than these in-jokey shows tend to be. I’m going to keep watching it, but it doesn’t have a lot to offer unless you’ve been actively following anime for the last year or so. 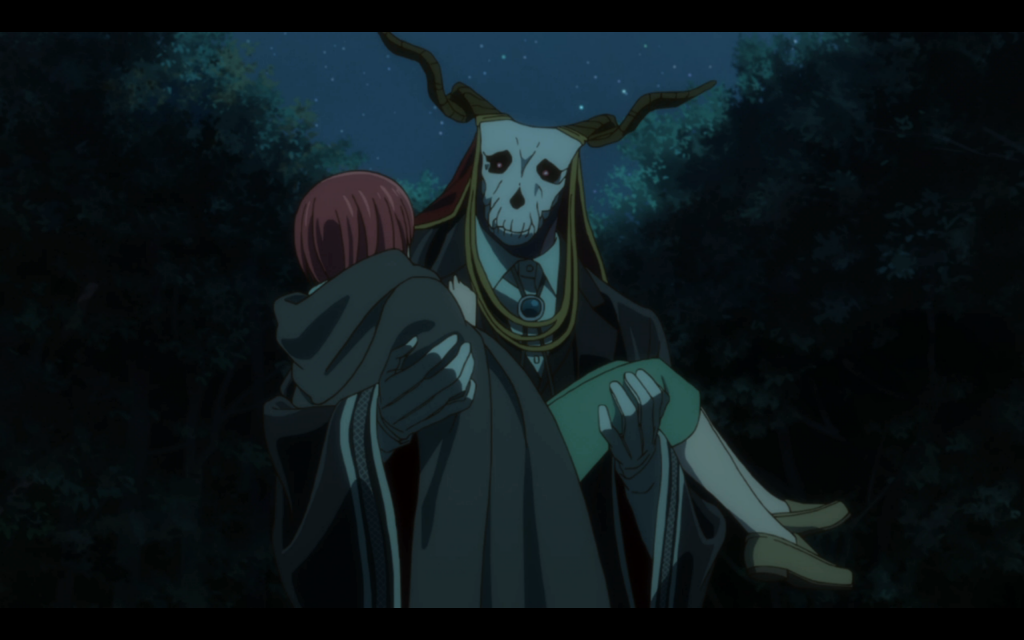 The Ancient Magus Bride– I have to admit, I was distracted during this show because I couldn’t help wondering what Anime Feminist was going to think of it. A young girl sells herself into slavery, to a huge monster dude who calls her pet names and treats her like a dog? Including forcibly bathing her? How could the show itself possibly compete with the entertainment value of feminists having a complete meltdown over it?

Turns out, the person who reviewed it for AniFem has read the manga, so was able to reassure feminists that the sundry “red flags” in this episode are not truly indicative of the story’s overall quality. You would think this experience would lead AniFem to question their policy of “Screen all first episodes for problematic content and judge them accordingly,” but apparently not. Remember, I may defend AniFem’s right to exist, but that doesn’t mean I have to think that anything they publish is any good.

Oh right, I just wasted time talking about another anime blog and not the show itself. So far, it’s high quality overall, but it’s a bit of a cypher to me…I need to see more before forming an opinion, which is rare for me because having opinions tends to be one of my strengths, really. I think I was just too distracted by wondering about how this show was going to be perceived to pay enough attention to the substance of it, and that’s on me, not The Ancient Magus Bride. 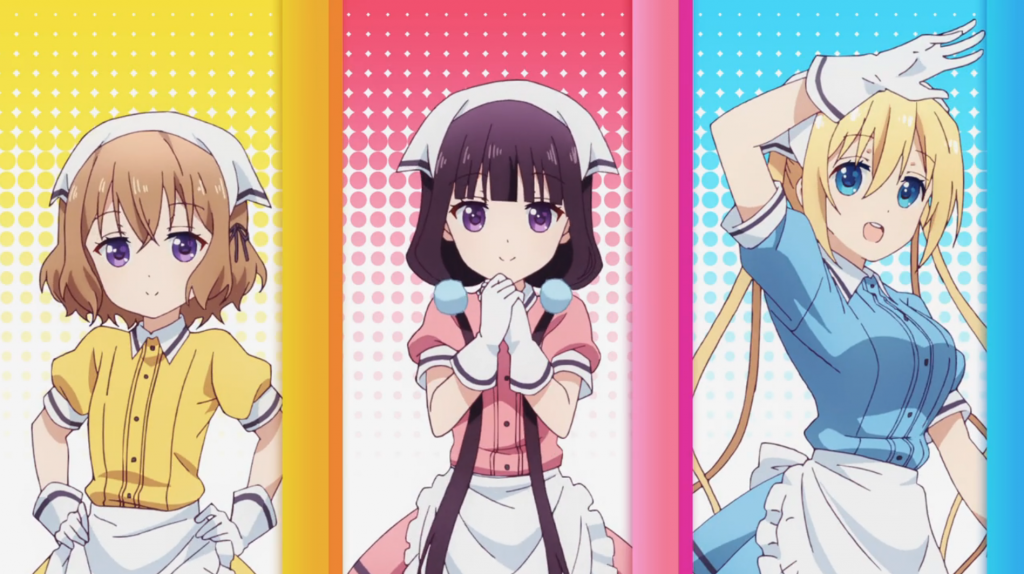 Blend S– One of the Immutable Laws of Karen is that I will watch any anime that takes place in a coffee shop; keep in mind that I have watched not just one, but both seasons of Is the Order a Rabbit?, making me quite possibly the only straight woman on Earth who has done so. Maybe it’s my love for coffee in general, maybe it’s pure nostalgia for Polar Bear Cafe, but this is The Law; I must watch all of Blend S, because it takes place in a coffee shop. It doesn’t matter if it’s terrible.

Fortunately, it’s not terrible. The premise sounds like it’s going to be toying with some S&M vibes (since the main character is roleplaying a sadist as part of her gig at the cafe), but right now it’s very reminiscent of the lighthearted workplace comedy of Working! and its sequels. The whole S&M hook is really just a tease so far, since the humor is about as adult, as err….well, Working! The only slimy thing about it is how Maika’s boss continually hits on her, which is only really objectionable if you’re on the “anime must never depict anything that would not be acceptable IN REAL LIFE” train. I don’t know why anyone gets on that train, it’s a boring-ass train. 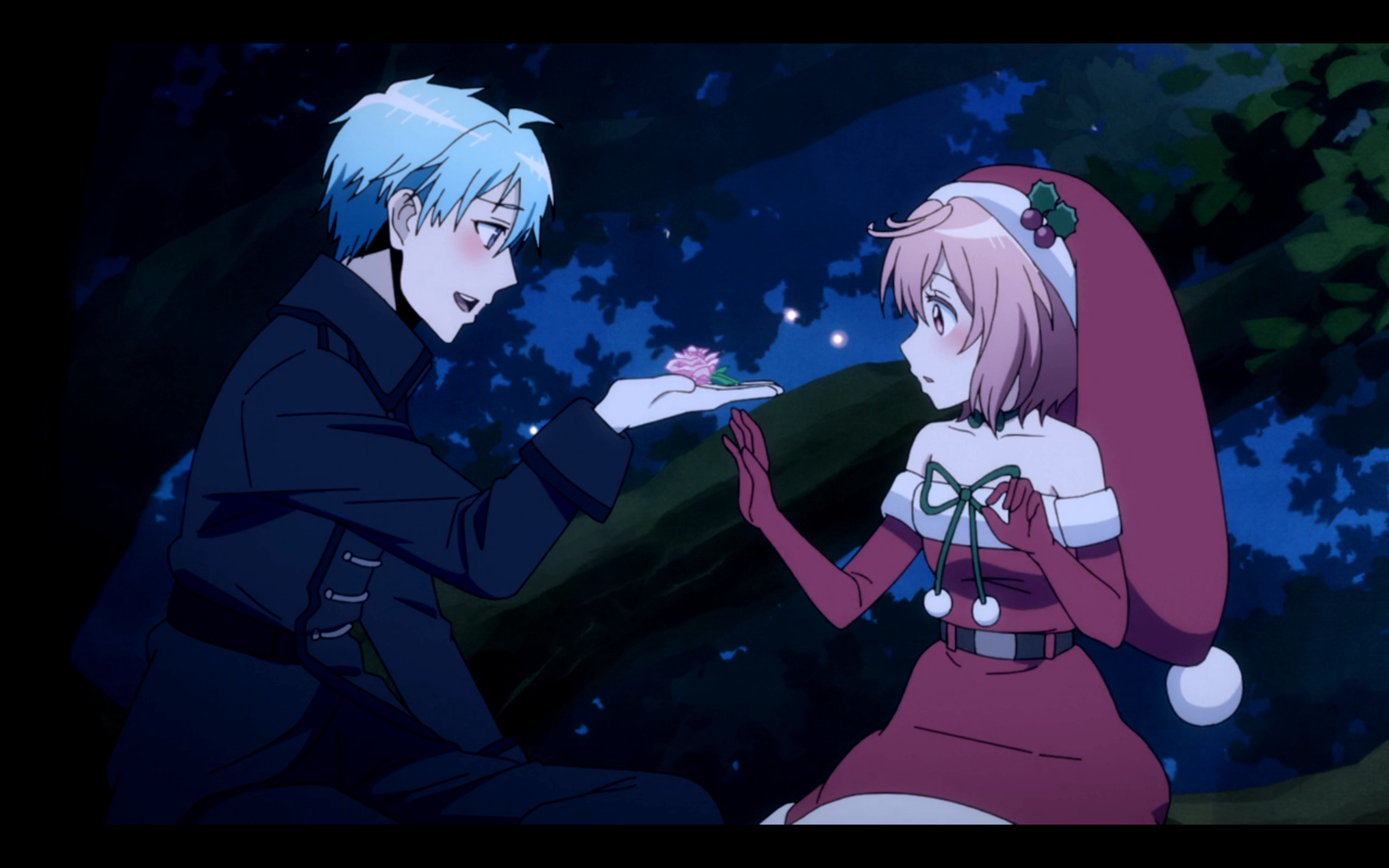 Recovery of an MMO Junkie– Another anime about people who spend much of their lives inside an MMO, although this one has an unusually adult take on it. Instead of teenagers and college students, the characters on this show are definitely old enough to drink, so they can drink screwdrivers in front of the computer while they wonder why they’re wasting their lives grinding for levels. (No one has actually done this one the show yet BTW, but it seems like something they would do.)

It’s gender-swapped, with the female character playing a male avatar in the MMO and vice versa, and it looks like it’s mainly going to focus on the romance between the lead characters. Normally, I would expect betrayal when they find out about each others’ true identities, followed by inevitable reconciliation, but this show is sophisticated enough about MMO culture that I trust it to go somewhere more interesting with the relationship. It would be really cool if after the reveal, both players just went “Oh, well that’s not surprising,” and just continued playing as normal.

A Sister’s All You Need– This show turned people off with an introductory scene that tried to portray little sister fetishism as disgustingly as possible, and succeeded, with stomach-turning results. Some concluded that the show was simply gross, but I think I get what they were doing by taking the little-sister trend to it’s logical (if unsettling) conclusion. And the show features interesting relationships between insecure writers, who are all insecure for different reasons, and that’s right in my wheelhouse.

This show actually reminds me of The Pet Girl of Sakurasou, which also received some early backlash for having a “gross” premise, which turned out to be entirely overblown. Now, it may turn out to be just another forgettable show trying to earn some points with shock value, but it could also be the little sister show that actually examines why people develop this obsession, which would be interesting. I would call it “a deconstruction of Oreimo and it’s ilk,” except A)I don’t actually know what ‘deconstruction’ means and B)that sounds so pretentious I would have to slap myself. Let’s just say that this show has the potential to do something different with its premise, and hope that it does.

Konohana Kitan– This feels incredibly bland to me. I think it’s trying to be that kind of episodic occult show where the supernatural-creature-of-the-week is the focus, and the main characters are more there for consistency than anything else. (See: Mushi-Shi, The Morose Mononokean.) However, too much attention is given to the little fox girls in the foreground for the show to have that kind of oblique feeling, which would be okay if the fox girls weren’t such boring characters.

It’s cute as hell, and if you like anime girls with fox ears and/or tails, this could be your Show of the Decade, but I’m not sure if it has much to offer besides moe/fetish appeal; it doesn’t have the sophisticated appeal of an occult anthology show, nor does it have strong enough characters to work as a slice of life show.

Love Is Like A Cocktail– As a big fan of I Can’t Understand What My Husband is Saying, I was anticipating this one; anime about stable, married couples are rare and intriguing. However, it’s hard to get excited about something that’s three minutes long. I get that these kinds of shows are designed as shorts, and they’re not meant to sustain full 22-minute episodes, but I still think three minutes is a little lean; I would prefer half-length episodes, like Muromi-san and Encouragement of Climb.

It’s cute, and having each episode themed around a drink works nicely, but it makes me wish there was more to it.

March Comes in Like A Lion, Season 2– So, hahahahah funny story, I thought I had completed the first season of this show, only to realize that I somehow stopped watching it towards the end and had no memory of doing so. That may sound like it bodes ill for Lion, because if it were a good show, surely I would remember whether I had finished the season or not? However, I think of this show as being kind of like the Marcel Proust of anime: it’s very artfully done and nuanced and everything, but sometimes you just can’t take it anymore and need to put it down for about five months.

Anyway, now that I’ve had a nice break, I look forward to catching up on Lion and finding out what’s new with Rei and his deranged sociopath of a stepsister.

Food Wars! The Third Plate– By now, you probably know whether you enjoy the Food Wars! brand of attractive and talented people having elaborately illustrated foodgasms over curry, or not. I found the formula was getting a little stale for me by the end of The Second Plate, but it’s still amusing enough to keep up with, for now. I find myself beginning to genuinely dislike Soma though: like, why you gotta challenge EVERY chef on the show to a duel? Can’t you just be secure in the knowledge that you cook good food,? Did you watch too much Top Chef as a toddler and it totally distorted your view of eating meals?

That’s all for now; I may pick up a few more fall shows, in which case I’ll write an Impressions: Part Deux post. However, it’s entirely possible that that will never happen, in which case I would like you to forget that we ever had this conversation.