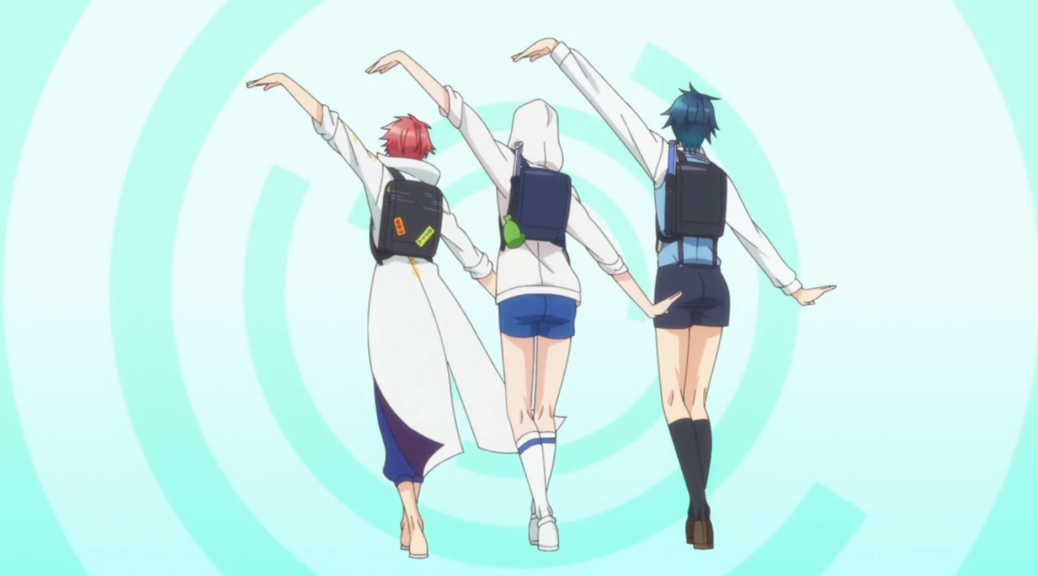 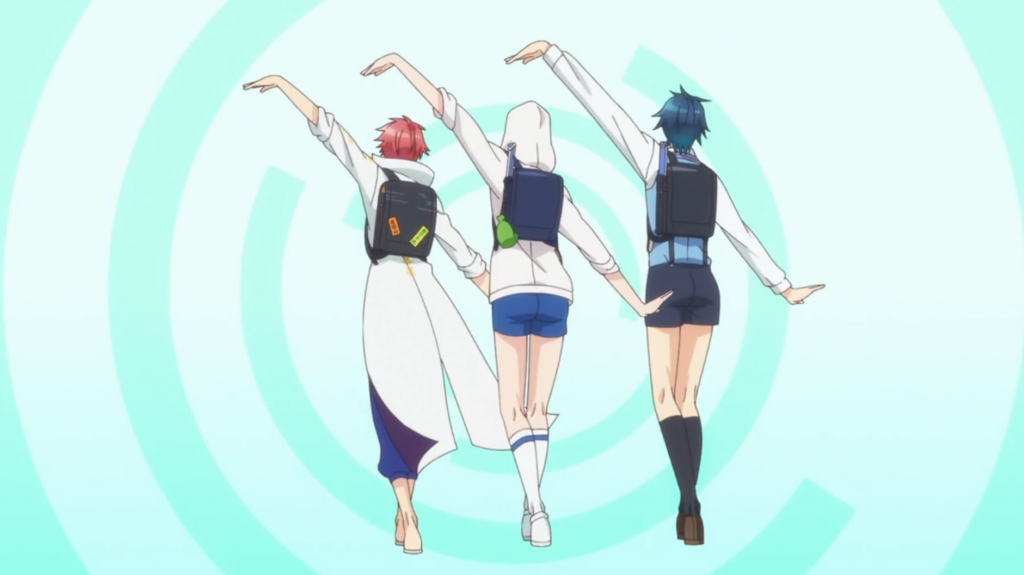 Normally, when I want to write about a show, I have something in mind that I’d like to say about it. This is the exception: I am writing about First Love Monster in the hopes that by writing about it, I will figure out what I just watched. Considering the fact that I’m admitting up front that I have no plan, and this is more a form of attempted therapy than analysis of said show, I will not blame anyone for bailing out at the end of this paragraph.

Preamble covered, just what the hell is First Love Monster?  When I watched the first episode three months ago, I was confused about who the show was targeted at. Now, after catching up on the 11 remaining episodes, I’m still asking the same question. This is somewhat unique in my anime-viewing history.

It’s ostensibly shoujo, right? It’s a rom-com, and the guys are pretty much all tall and all handsome (with a few token moe boys who’re more cute than hot), and one of the really tall handsome guys has a thing for pushing the heroine up against the wall, and there’s even an episode where the dudes get shirtless. But most of the guys are also elementary schoolers who happen to be in fully adult male bodies for no reason that is ever explained, meaning they constantly talk about poop and wieners– especially poop. And even though Kanade and his friends are said to be in fifth-grade, to me they act more like second-graders, making the whole thing even more ridiculous.

If you want to just write the whole thing off as ridiculously offensive and not spare it a moment’s more thought, I’m certainly not going to blame you. The whole show should really be five minutes long: Kanade saves Kaho, Kaho develops a crush on him and asks him out, he says “actually, I’m still in fifth grade,” and Kaho responds “Oh wow, I had no idea, why don’t you go back to the playground with your friends.” Of course, since Kaho’s social cluelessness is almost as overpowering as Kanade’s immaturity, she agrees to date him, and we have a situation.

The thing I can’t get past is just who the audience is supposed to be. Usually, when a show is pretty dumb in concept and just exists on pandering to its audience, at the very least, you know who’s being pandered to. But how does that work with this show? Sure, the guys are hunky-looking, but the constant potty humor is bound to be a turn-off for a lot of girls. It’s hard to think of a guy as hot when he’s talking about how he hurt his pee-pee when he sat down on a swing. I mean, I reckon there’s some girls somewhere who have that fetish, but there can’t be that many of them, right?

And since the boys are wearing elementary-school clothes that are way too small for them, I guess you could argue that the guys are showing lots of skin, hence pandering-to-the-ladies. However, tall anime guys squashed into tiny short sets and knee socks don’t look sexy; I’m hardly the arbiter of female sexuality, but I have to assume this is closer to fan disservice for many girls than fanservice. It just looks ridiculous, which is the point of course, since the show’s a comedy. But I don’t think I’ve ever seen a comedy where the style of the humor has the side effect of rendering the fanservice unpalatable.

Maybe I’m looking at this the wrong way, and it’s actually very simple: First Love Monster is a comedy, and the fact that it’s also shoujo is more or less incidental. Maybe the entire appeal of the show is supposed to be the contrast between these guys who look like typical anime dreamboats acting like little children, and the target audience is “anyone who finds that funny.” Of course, it’s basically the same joke over and over again, but whatever. 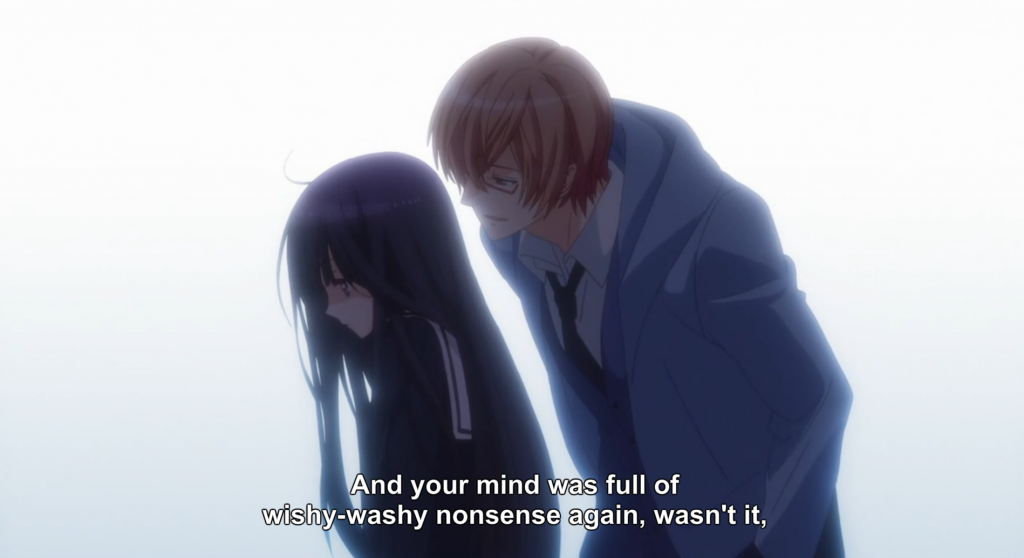 Taga thinks he’s a character on Diabolik Lovers and treating his love interest like garbage will result in her falling in love with him. However, because this is not Diabolik Lovers, he’s going to lose to a guy who still believes in Santa Claus. So that’s something.

Still, it’s clear that Kanade is actually supposed to be taken seriously as a romantic lead. He sometimes sounds wise beyond his years (which is why Kaho has a thing for him in the first place) when he parrots things his mother once said to him– something that, if you ignore what it’s surrounded by, is kind of touching. And the last episode has a pretty amazing sequence where the premise is basically “What if this were a normal shoujo, and Kanade was a proper romantic hero because he wasn’t 10 fucking years old?” Said episode also contains Kaho having an epic meltdown about how her show makes no sense, which is probably worth watching in and of itself (I could say “it makes the show worth watching,” but let’s not get carried away.)

So it’s just a silly comedy that’s not meant to be taken seriously as a romance…except for those times when it’s explicitly presented as a romance. Throughout the show, I kept expecting a twist that would give the show some further identity beyond “hot guys say the word poo.” For a while, since they say that Kanade is in fifth-grade but never give his actual age, I was sure that Kanade and his buds were actually in a coma for a few years after a bus accident or something, making the boys older chronologically than they are behaviorally. Whether that would make Kanade’s relationship with Kaho much less inappropriate is debatable, but at least there would be something for the writers to explore there. Alternately, I thought that maybe Kanade had regressed to a childlike state after the death of his mother, but was actually the same age as Kaho.

If there had been some twist like the ones I was speculating about, then the show could explore the idea of a high school student dating someone with childlike tendencies without literally being a child. Then maybe something would happen to help Kanade start acting more like his chronological age, and Kaho and Kanade would become viable as a proper couple. But no: that is not this show. This show really is about a high-schooler dating a fifth-grader, with no mitigating circumstances.

The show isn’t entirely without, err, charm; it’s at it’s best when it becomes a total screwball comedy and ignores the romance angle entirely, like when Kanade befriends a crab that the crew is supposed to eat for lunch, names it “Crabita,” and starts using it like a Pokemon. And the aforementioned sequence in the last episode works pretty well as a parody of standard shoujo cliches.

One other thing that’s kind of interesting is the character of Taga, who tells Kaho that she is “lower than dogshit” and treats her in the same fashion, despite the fact that he clearly likes her. He acts like the romantic leads in shows like Diabolik Lovers, only instead of being seen as desirable, he’s pretty much cast aside as irrelevant. If you want to be generous– and I do mean incredibly, almost unreasonably generous– you can interpret the show as a critique of a certain kind of masochistic shoujo. The tall, hot guy who treats the heroine like dirt ends up alone and lonely, because he’s a massive asshole and the fact that he’s really hot doesn’t mitigate the fact that he’s a massive asshole, while the heroine falls for the genuinely nice guy. Of course, in this case, the nice guy happens to be 10, but let’s not quibble on details here.

So, yeah…First Love Monster is a show that doesn’t work as a romance, features leads that are largely unappealing to women, and only occasionally works as a comedy. Who bought enough copies of the manga for this to get made into an anime? What was Studio DEEN thinking when they adapted this? DEEN makes Super Lovers, so they’re clearly not afraid of salacious material, but what’s the point of a show being salacious if it’s so thoroughly un-sexy?

I just…I just don’t get it, guys. I’m not even saying the show is bad, because I don’t think of it a TV show so much as some strange science experiment, imposed by some mysterious alien intellect with motives I cannot begin to comprehend. I just wrote (checks) 1400 words and no, I still don’t know what I just watched. You win this round, Japan. 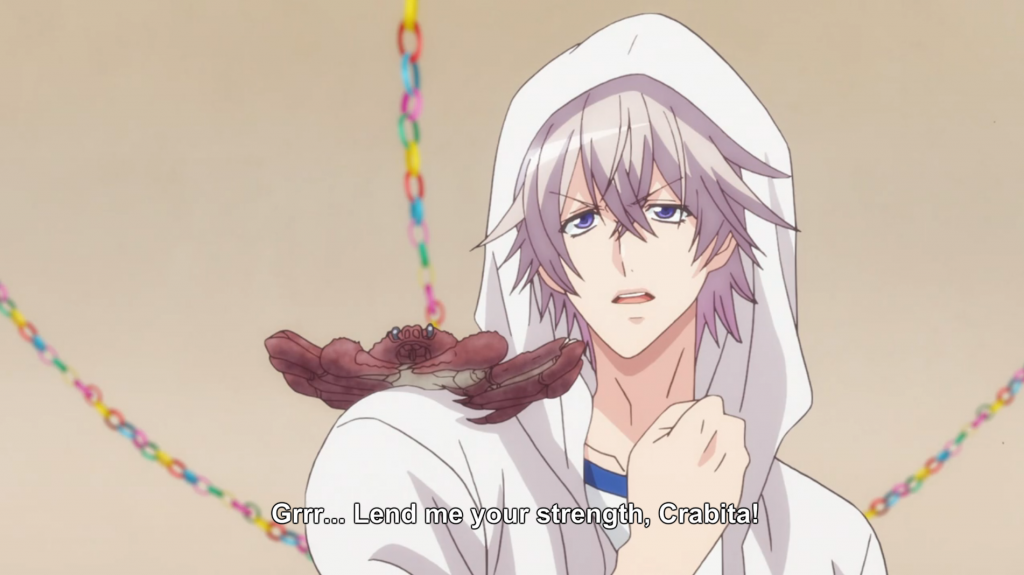 2 thoughts on “What is First Love Monster?”