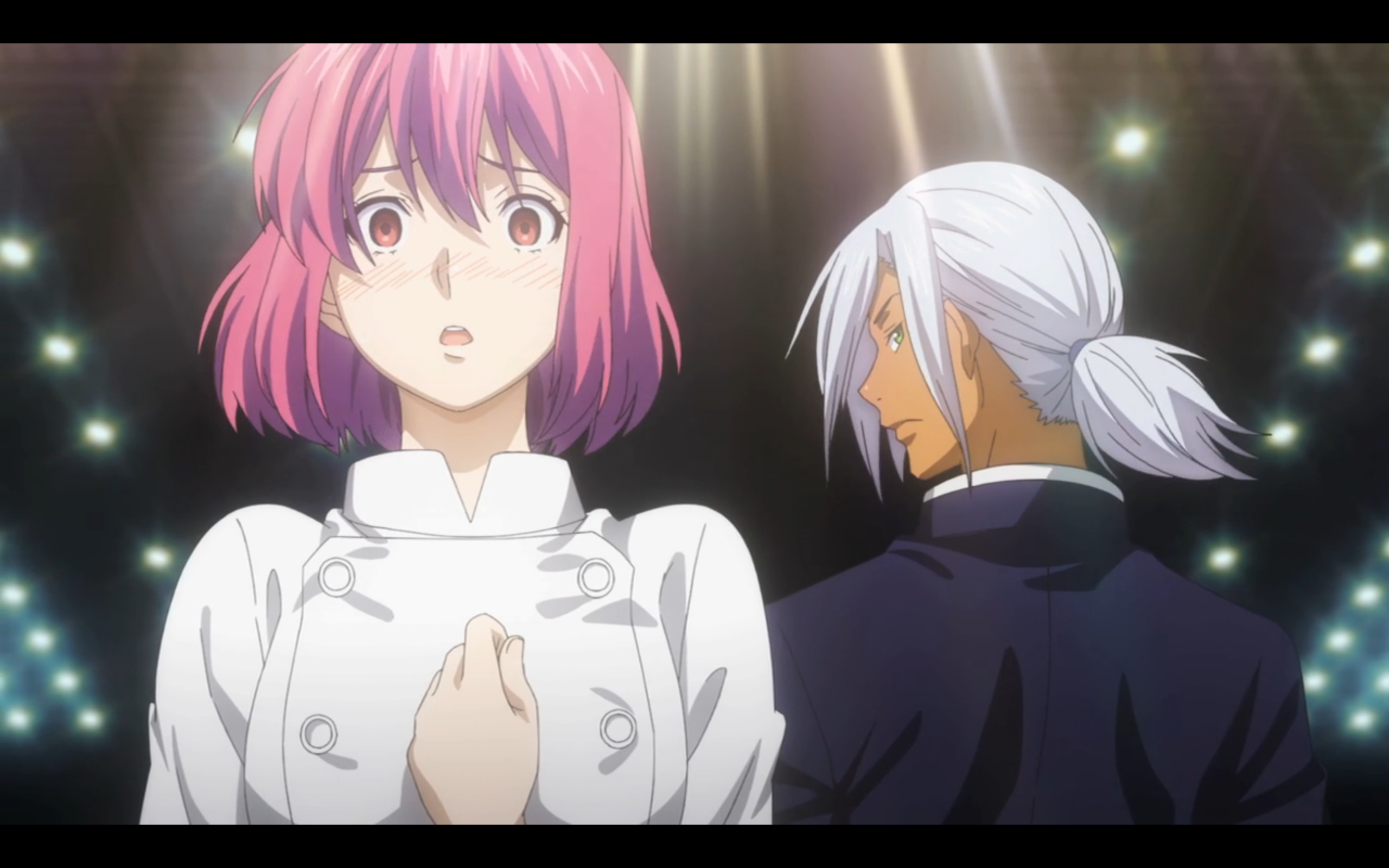 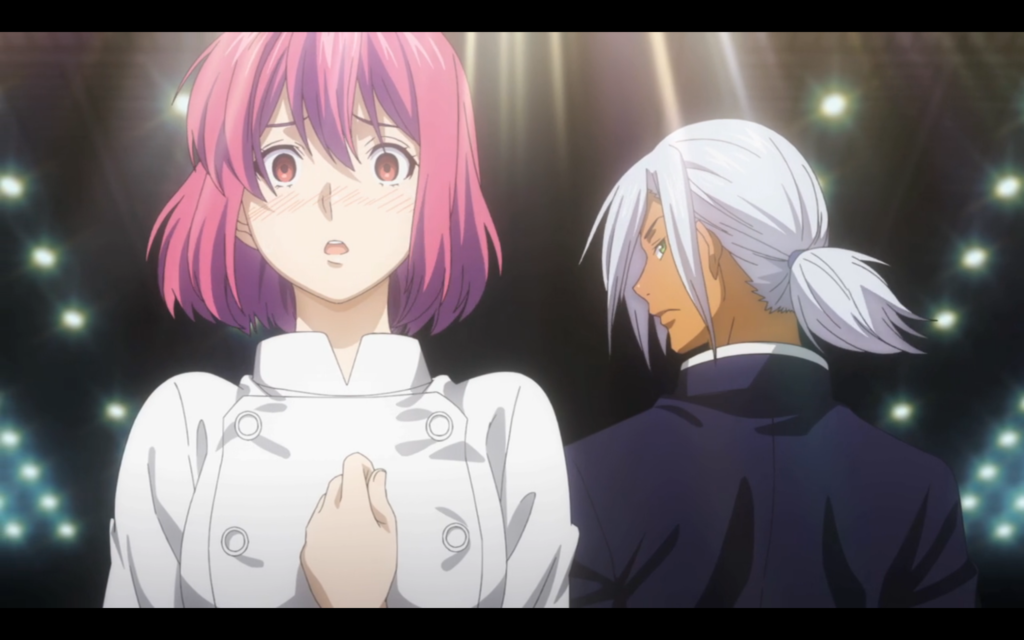 Well, I was wrong: I called the previous quarterfinal match for Megumi, only it was Ryo’s name that got written down with the Giant Brush of Gastronomic Victory. I really felt like the show was telegraphing that Ryo’s strong flavors were too palette-fatiguing and Megumi’s dish was more inviting to actually eat, but I guess his seafood ramen was just that good, overbearing or not. Besides, it was a big deal for Megumi to make it to the quarterfinals in the first place, so even though she got knocked out of the contest, the fact that she earned the respect of her peers makes it a net victory for her.

The kids watching in the peanut gallery note that Heihachi did not go shirtless for Megumi’s dish the way he did for Ryo’s, meaning they should have predicted who was going to win. However, in a scene I’m not sure I fully understand, Heihachi excuses himself to the bathroom and thinks about what an amazing cook Megumi is becoming; he took his shirt off for her deep down in his heart, or something like that.

The main event for this episode is the match between Hisako, Erina’s uptight secretary who specializes in medicinal food, and Hayama, the dude who is all about spices. They’re facing off in Battle Hamburger, which is interesting because it doesn’t seem to play to either of their particular strengths. Come to think of it though, very little would really play to Hisako’s strengths in this competition; the person who cooks with health as their primary goal is always at a disadvantage when the contest is being judged solely on taste and texture. It’s not that healthy food can’t be tasty, but when your goal is to make something as tasty as humanly possible, that doesn’t lend itself to using ingredients that also aid digestion and such. 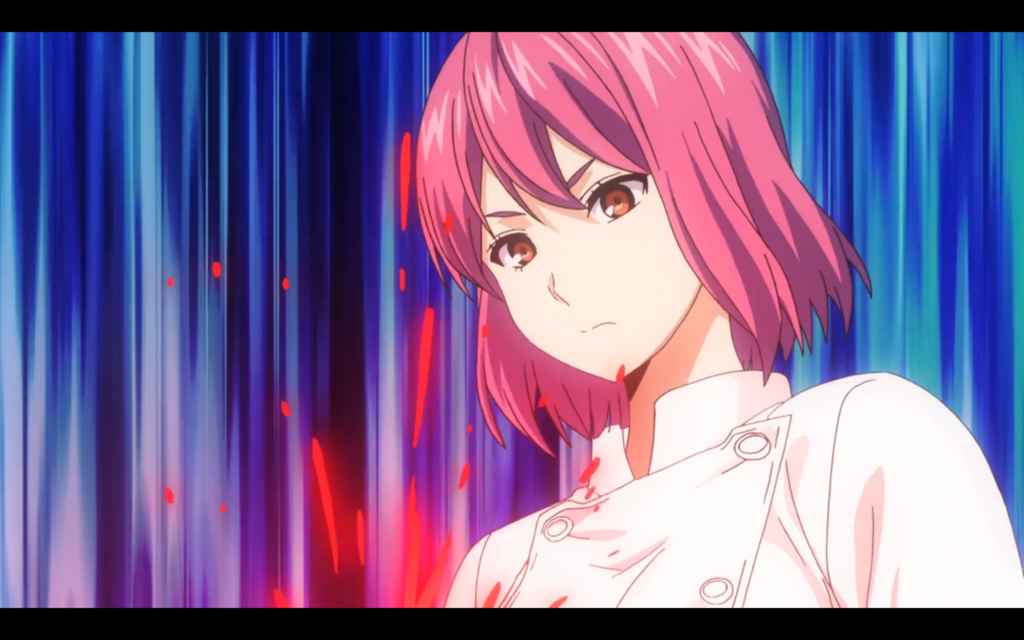 Hey good luck Secretary-chan, hope you have a good recip OMG SHE CUT ITS HEAD OFF

In any case, Hisako’s first association when someone says “hamburger” must be “callously butcher a live turtle on the spot,” because that’s what she does. I thought I was totally on Hisako’s side in this bout, but I think I started rooting for her to lose once she cut the turtle’s head off. I mean…ok, I’m not a vegetarian, so I’m probably a hypocrite for expressing distaste at an animal being killed for food, but dammit, turtles are just so darned cute.

Is it so wrong that I’m okay with cows and lambs being killed for meat, but turtles are where I draw the line? Besides, not only does she kill it, she DRAINS ITS BLOOD, like some kind of sick Rachel Ray-inspired vampire, and uses the fresh blood to pump up the flavor of her hamburger patties. She also adds a bunch of medicinal herbs, so this Turtle Murder Burger probably cleans up congestion, gout and erectile dysfunction (not that I’m implying anything about Heihachi). 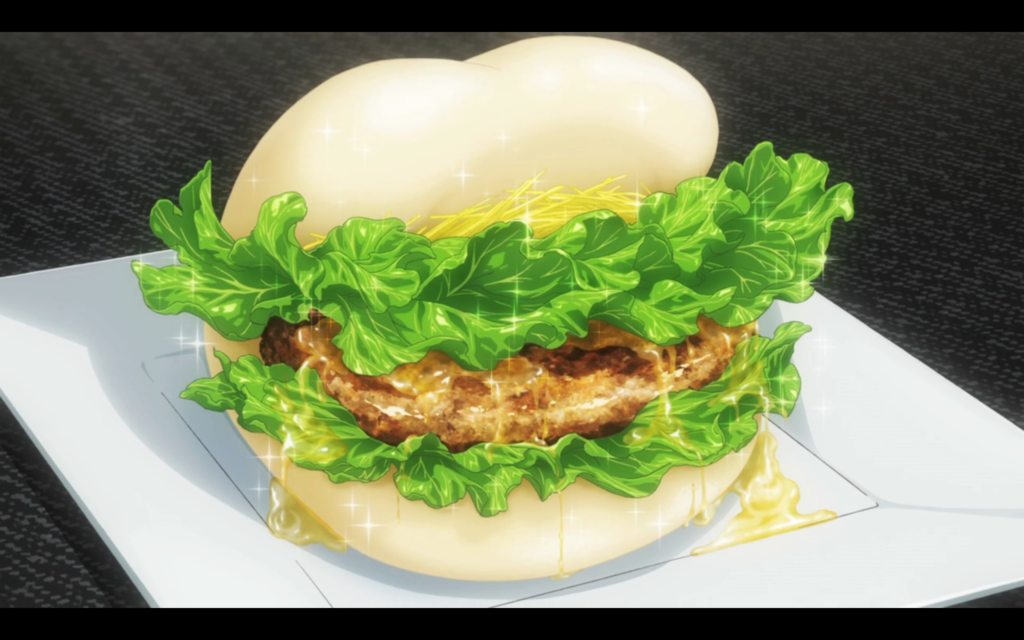 She also uses Asian-style soft steamed buns, which seems really weird, if not quite offensive to my western palette. I don’t have anything against steamed buns, it just seems like the doughiness would be a really strange combination with a meat patty. The judges appreciate the fact that her turtle-and-pork concoction gives them all a healthy glow (and brings out a lot of umami, seriously enough with the umami quotient already), and it seems like Hisako has met the challenge head-on.

We learn via flashback that Hisako is obsessed with Erina…well, we knew that already, but we learn just HOW obsessed Hisako is with Erina. Her goal in her cooking is to always stay just a few steps behind Erina, always in reach of her Glorious God Tongue…it’s like they were going for some lesbian subtext, then said “you know what? Fuck it,” and went with full-on lesbian text instead. Good for them, I think. 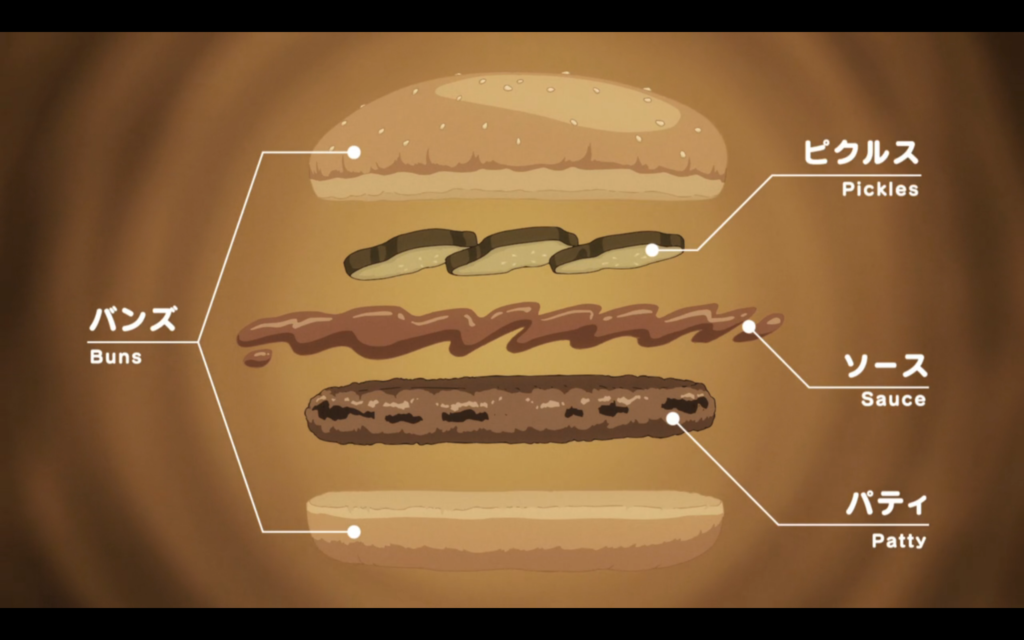 Thank you, Food Wars! for giving us a helpful diagram illustrating what a hamburger is. It would be terribly inconvenient if anyone was confused.

But hark, Hayama the Cold-Hearted Spice Boy has yet to present his burger! Not only does he fill the whole auditorium with yellow fumes from his abundant spices (Team Instinct shout out?) he makes a gyro-inspired burger, using seasoned Turkish lamb meat and yogurt sauce and pita and…waitaminute. That’s not even a “gyro-inspired burger,” that’s a gyro, straight up. I guess the fact that the meat is in the form of a patty instead of strips kind of pushes it slightly over to burger territory, but seriously, the flavor profile is 100% gyro.

This would put me in an ethical quandry as a judge, because while gyros are absolutely delicious and one of my favorite things to eat, they are not hamburgers; we know this because when you go to a Greek or Turkish restaurant, “gyro” and “hamburger” are always listed as separate menu items. I mean, maybe you’ve gone to some weird hellhole that has a “Gyroburger” on the menu, but it’s not my problem if your local restaurants are terrible.

Speaking of which, I would like to go out to Greek restaurants way more often than I do, but all the ones in my neighborhood have a severe parking shortage. How am I supposed to stuff myself full of delicious donor meat, grape leaves and spanakopita if I have nowhere to park? Do you expect me to pay for a taxi, like some kind of fancy lady? But just think of a delicious gyro, that delectable, mouth-wateringly salty seasoned lamb meat, balanced by the refreshing tang of fresh yogurt sauce, accompanied by crisp, fresh greens and delicately sweet tomatoes, all offset by the contrasting textures of crunchy bread, the oven-baked pita imparting a subtle, earthy aroma along with a gentle heartiness….. 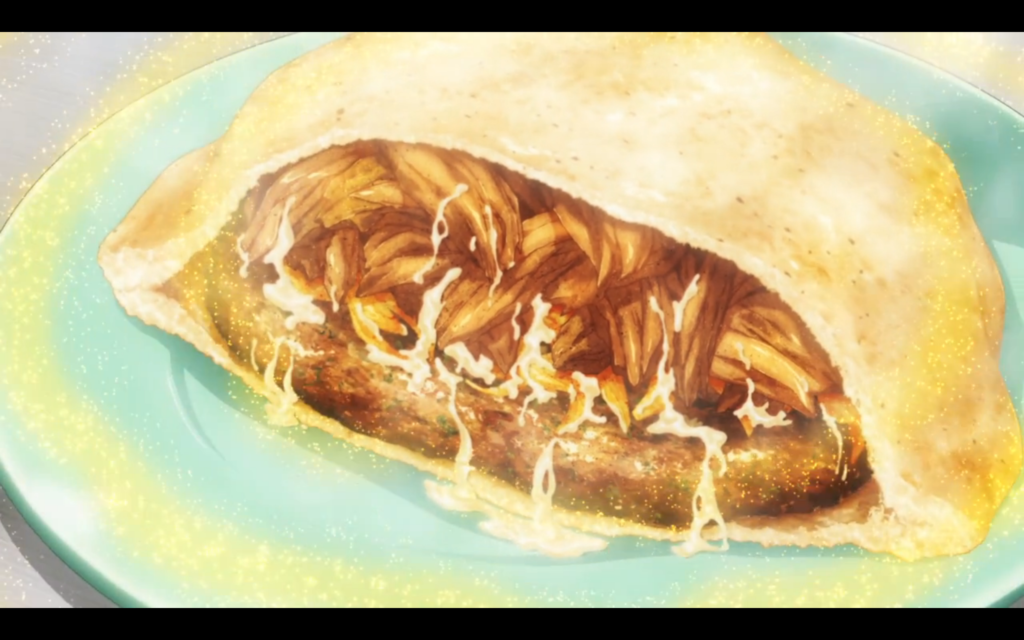 What is this? DELICIOUS!

…ahem. Anyway, I really like gyros, but I think Hayama should have been disqualified for making the wrong food. Unfortunately, the judges are still on their insane umami-worshipping kick, and the pickling agent that Hayama used as a topping does more to enhance the (god-forsaken) umami of his burger than the ginger Hisako used, so he wins. Hayama tells Hisako that she can’t beat him while she keeps aiming for second place, and he’s probably right, but I still think he cheated and is pretty much a bad guy.

Speaking of bad guys, this episode also introduces Subaru, whose shtick is that he looks like a big punk, but he’s actually extremely detail-oriented. Clearly he’s the villain of this arc, because he insults Aldini’s little brother Isami and, err, spits out his gum on Aldini’s special knife. Err, who does that? Even in Food Wars!, who does that? 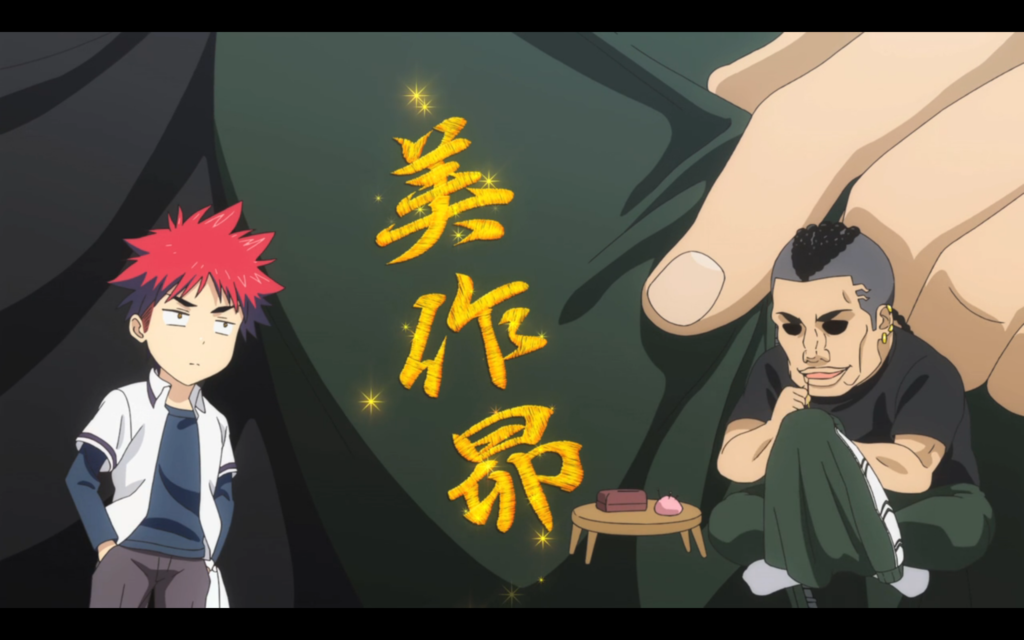 This was the only screenshot featuring Subaru I could bring myself to take. Normally he has some dark stuff on his face that I think is supposed to mean he’s always in shadow, but it mostly looks like he just came out of a coal mine.

The last thing we learn is that the quarterfinal match between Aldini and Subaru has been declared a Shokugeki, or official food duel; I think we’re supposed to infer that Aldini was so pissed about the insult to his brother’s cooking skills that he upped the stakes, but personally, I think he’s more upset about Subaru messing with his prized knife.

Does the loser of a Shokugeki get expelled from the school? It’s been a while since I watched the first season and I don’t remember exactly how the rules for a Shokugeki differ from any other match, but if the loser gets kicked out of Totsuki, I have a feeling Aldini is about to be toast; they did not introduce Subaru with all this fanfare for him to lose in the quarterfinals.

Next episode: One character I really don’t like squares off against a character I don’t really care much for one way or the other. I’ll probably spend the whole recap talking about how much I like fried shrimp with tartar sauce or something. 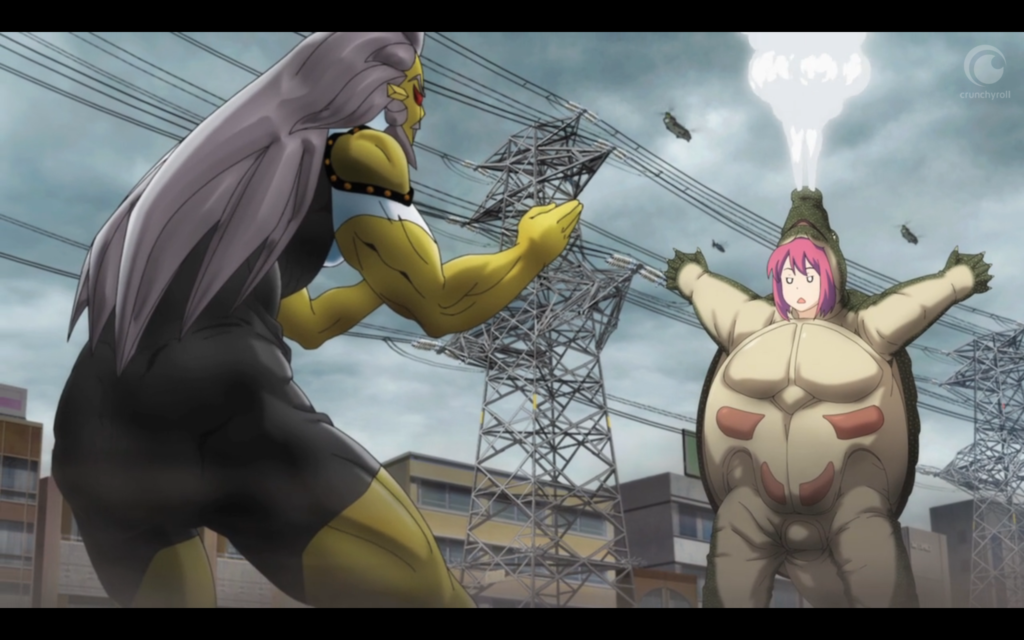 I probably should have put this screenshot up higher, but let’s be honest: it’s better without context.