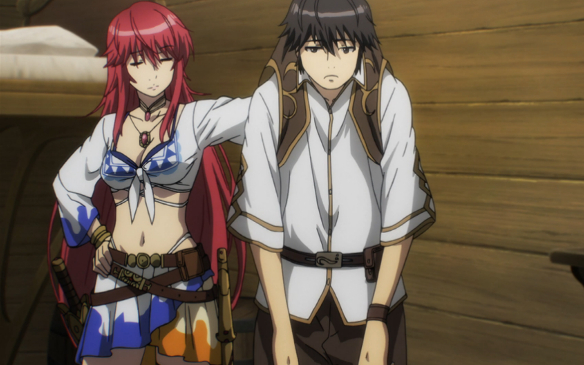 “Every hero dies from overwork.”

Alderamin on the Sky starts off by making it clear that its protagonist has little desire to get himself involved with the military. Yet somehow, Ikta finds himself front and center in a dangerous situation– protecting an imperial princess, no less– and that’s only the beginning of his troubles.

I find myself drawn in by how straightforward and honest these first two episodes were. We’re told by the end of the first episode that Ikta will become a famous general; this may sound like a boring way to introduce the story (and on paper, maybe it is), but the magic was in the details. I came away from episode two feeling like I knew exactly what kind of story this anime wants to tell.

Competence is a double-edged sword with any fictional character. I was a bit worried that Ikta would play too far into the typical wish-fulfillment nonsense that many light novel protagonists fall into, but so far, I like the way he’s presented here. Ikta is competent, but politically powerless. Yattori, the series heroine, keeps him grounded while coming across as a strong character in her own right.

Ikta has a long bucket list of reasons to want to light the world on fire and watch it burn, and yet, that isn’t what he’s all about. Even this early on, there’s a lot I could say about his personality and attitude, both positive and the negative. For now I’ll stick with the most important thing: I can buy it. Ikta makes sense to me and seems believable inside his universe.

Alderamin introduced itself, it’s world and characters in a masterful way. Ikta is a lazy womanizer and cynical defeatist, while Yattori is an honorable noble from a prestigious family with a military background. What makes them interesting is that neither of them have much talent at acting their assigned roles.

I already find myself loving the relationship dynamic between Ikta and Yattori; their mutual respect for each other says a lot about both of them. In Ikta’s case, it demonstrates that his defeatist attitude is fueled both by a hatred for his kingdom’s political system and knowledge of how it works. Ikta helps demonstrates Yattori’s position on nobility when she asks his opinion on political issues. It’s also worth mentioning that her original purpose for dragging Ikta into the this whole dilemma was to cheat her ranking on a test for elite officer school…naive, she is not.

Now, cynical attitudes are something I feel are a dime a dozen in light novel stories. Maybe I should be worried about how this could play out down the line, but so far I can’t find much fault with the way Alderamin presents itself. In fact, I find myself agreeing with much of the attitude we’ve seen so far, even jotting down favorite Ikta quotes for future reference.

“Every hero dies from overwork.” manages to express the core of Ikta’s personality, and the use of that line in ep. 2 felt downright tragic. I wonder what the princess hoped to gain by dragging out his past the way she did; it almost seemed like she wanted him to snap. The way she mentioned his parents and mentor was miserable to say the least.

When the princess spoke of her own rotten blood, it left a strong impression: she clearly isn’t much of a fan of the current political system either. I wonder how much she’ll manage to change the status quo before the anime ends– how much power does she really have?

Speaking of the princess, something that stood out is the position of women in this fantasy world, largely due to Yattori: she’s clearly highly trained and competent at fighting. The fact that no one raises an eyebrow at how strong or scary she is while fighting give us a bit of world building, in classic show-don’t-tell fashion. Her character could only exist in a universe where women are accepted in the role of warriors.

At first glance there seems to be an unusual amount of equality within this fantasy kingdom. The military is okay with both knighting women and with training them to be officers. That creates an interesting contrast with Ikta’s mom’s story, where she was given as a gift to his father from some harem, as you would expect in a society where women are considered property. I’m not sure what the story will do with these disparate elements, if anything, but that only adds to my curiosity.

Another instant favorite of mine is “What a soldier needs is imagination which allows him to use fragmented information to envision the whole.” I liked the way it took the whole “military strategists are good at chess” trope and changed the nuance. The statement was simple, but valuable: Real strategy is about using your imagination to improvise based off the information you have. I think that is wise life advice in a general sense, military or otherwise.

So far my favorite aspect of this anime is easily Ikta’s relationship with Yattori (Who is rapidly becoming a favorite heroine of mine). Their closeness, despite seemingly different life goals, is charming. I loved the final scene of episode two where they both have a nice moment of understanding.

I’m a bit worried to see this show getting caught up in school antics, but hopefully episode three will ease my fears. I expect Ikta’s hatred of the military to be a central part of the story, but I also expect to see him go above and beyond to back up Yattori when push comes to shove– and it’s interesting just how strongly I feel like I know these characters, after only two episodes.

On another note, I have to compliment the show for its ability to change tone effectively. One moment our characters are relaxing and sharing a nice meal, the next they’re slaughtering some enemy soldiers in appropriately serious fashion. Earlier, in episode one, we smoothly transitioned from silly character introductions to survival mode.

I’ve come to expect anime to be bad at this kind of transition and often enough, I find they don’t even try to make it work. The fact that this anime pulls it off helps make the soldiers in this story feel like proper soldiers; often, even in fairly serious anime, soldiers seem to act more like comedians than warriors, and it can take you out of the story pretty easily.

One last thing I want to point out before wrapping up is just how pretty Alderamin is; both the people and the world itself are gorgeous. Ikta’s obsession with relaxing in hammocks fits right into this universe. In fact, instead of pontificating about Alderamin, I find myself wanting to go chill somewhere with a nice breeze. [Okay, but make sure you’re all caught up on anime first–Karen.] Ikta’s obsession with the women in this world, while not exactly commendable, is easy to understand….

I have a test I like to give fantasy worlds: Would I want to live there? If not, would I at least want to visit? Most fantasy worlds fail both parts of the test and they do so by design. Ultimately the test is entirely for fun and has no real critical value, but when do we ever let that stop us here at Otakusphere?

Let’s see…I’d rather not live under a monarch, so part one of my test is probably a no. If the sense of equality in the military is found in the every day lives of civilians in this society, that is a strong selling point. I’d need to compare what these magical bear creature things are capable of versus real world science. We know they can’t heal a giant hole in someone’s chest… but well, that guy was probably a goner either way.

The verdict is still out on whether or not this universe is a desirable place to live or not, but I have to admit that it looks like a nice place to visit…you know, provided I could avoid locations that are likely to become war zones, or getting myself drafted into the military. I’ll just have to keep watching until I have enough knowledge of Alderamin‘s intriguing world to safely plan my vacation. [No vacations allowed, we need you on the podcast–Karen]