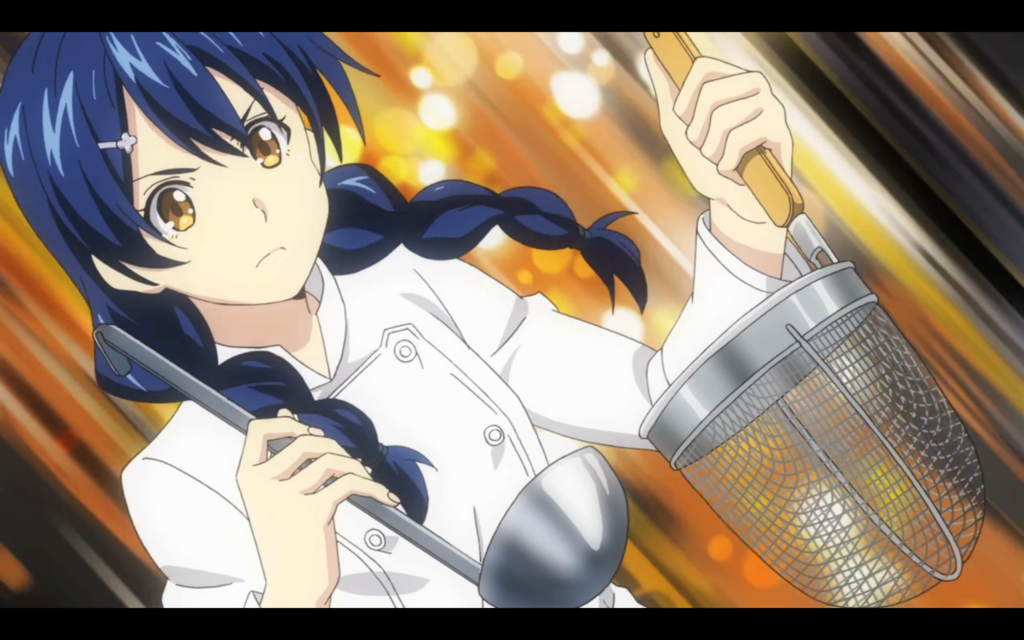 This episode features Battle Ramen, meaning the judges get to say “Umami!” about a million more times, just in case you didn’t get your fill of that during Battle Bento. Now I know umami is a cool flavor and all (and a point of national pride, since it was discovered by a Japanese scientist), but I almost wish the student chefs would start baking cupcakes or something just so everyone would stop going on about the damn umami quotient already.

Just my luck though, if they did hold Battle Cupcakes, someone would make Red Snapper Cupcakes and everyone would be losing their minds about the amount of ‘delicate umami flavor’ in the smoked eel frosting or something. Oh well. 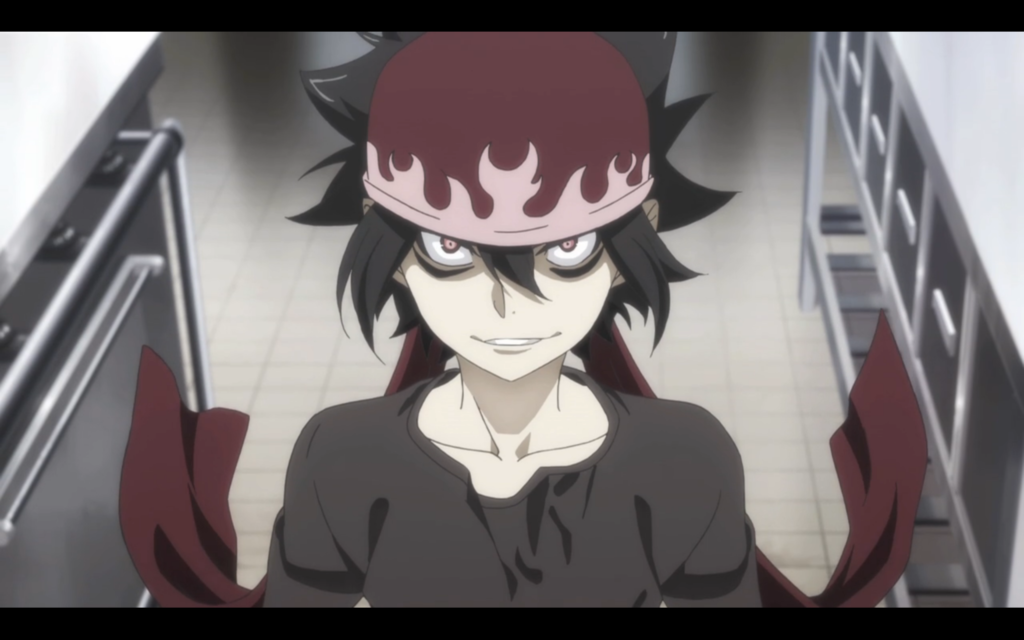 With the bandana-flourish, the flashbacks set Ryo up as a kind of Evil Soma…or at least Slightly Dickish Soma. I don’t care how good his stuffed chicken is, I would not eat at his trashy portside restaurant.

Continuing through the Autumn Elections contest, shy Megumi faces off against Ryo, a scary-looking dude who hails from some non-specified foreign country. Megumi’s storyline is fun, because unlike Soma, she could pretty much lose at any time, making her battles unpredictable. Plus, her very presence in the story is what keeps Soma from being an obnoxious-as-hell lead character; the fact that he recognizes and tries to nurture talent in people who would otherwise blend into the background makes you feel good rooting for him, instead of just shrugging through his constant victories.

In any case, we get some of Ryo’s backstory in this episode; apparently Alice Nakiri befriended him in unspecified-foreign-country during her “I will travel the world to learn the skills to defeat Erina!” phase. She thinks of Ryo as something of an underling, but now that Ryo is coming into his own– or perhaps, because Alice finally lost– he thinks he’s the better cook between the two of them. Interestingly, even after Ryo insults Alice’s cooking, she’s still talking up Ryo to the other cooks in the stands. I reckon that if she plans to get him back for his attitude at all, it will be done in private, and it will be vicious.

Ryo’s whole attitude is that Food is A Battlefield, and one must brandish strong flavors to destroy their opponents, and you know…I want to say that his philosophy is stupid, for obvious reasons, but look at the state of food television: Top Chef, Iron Chef America, Chopped, Cutthroat Kitchen, etc. A lot of food programming is based on using cooking as a stand-in for violence in competition, and of course Food Wars! itself is in that category. Also, as food television gets more ubiquitous, the amount that most people cook is actually going down, meaning that an increasing percentage of food culture is tied up in these competitions as opposed to traditional, cooperative cooking and baking. I really doubt that Ryo’s presence is supposed to make us question the ethics of food competition television, but it’s interesting that his philosophy would’ve made no sense 20 years ago, but you can’t dismiss it so easily today. 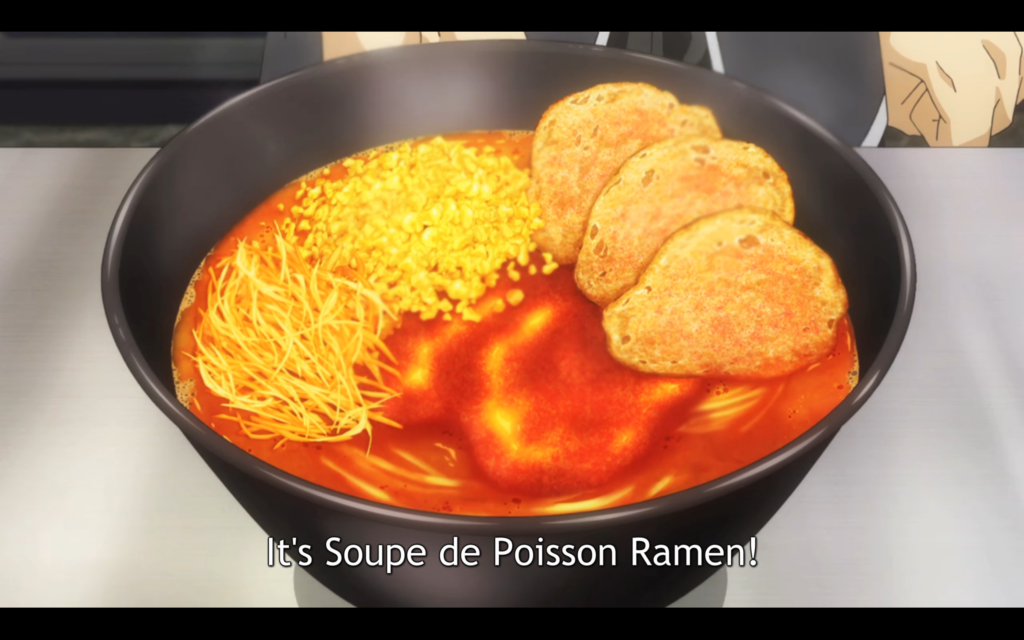 Ryo reminds me of one of those contestants on Top Chef who says “I like to use big, bold flavors,” like they deserves some kind of award for it. May as well say “I have no subtlety whatsoever, so I’m going to try to spin that like it’s style thing.”

Ryo’s big trick is to grind up a bunch of shrimp and lobster parts, including the shells, and use the resulting powder to load every component in his dish with seafood flavor. I suppose that’s clever, but aren’t the shells of crustaceans somewhat, err, indigestible? I think Heihachi and pals will be spending a lot of time in the bathroom after Battle Ramen. Otherwise, Ryo makes a French-inspired seafood dish that earns praise for avoiding any hint of “fishiness.” Now, I could be wrong, but isn’t that fishy smell/taste something that happens to fish when it starts to age, meaning the very freshest fish will never have a fishy aura? You just know that Totsuki only allows students to use fish that were caught within the last 20 minutes or something, so I don’t know if Ryo can really take much credit for keeping fishiness at bay. Anyway, the judges are impressed with Ryo’s rich seafood ramen, even though everyone who eats it reacts as though they were just punched in the face. 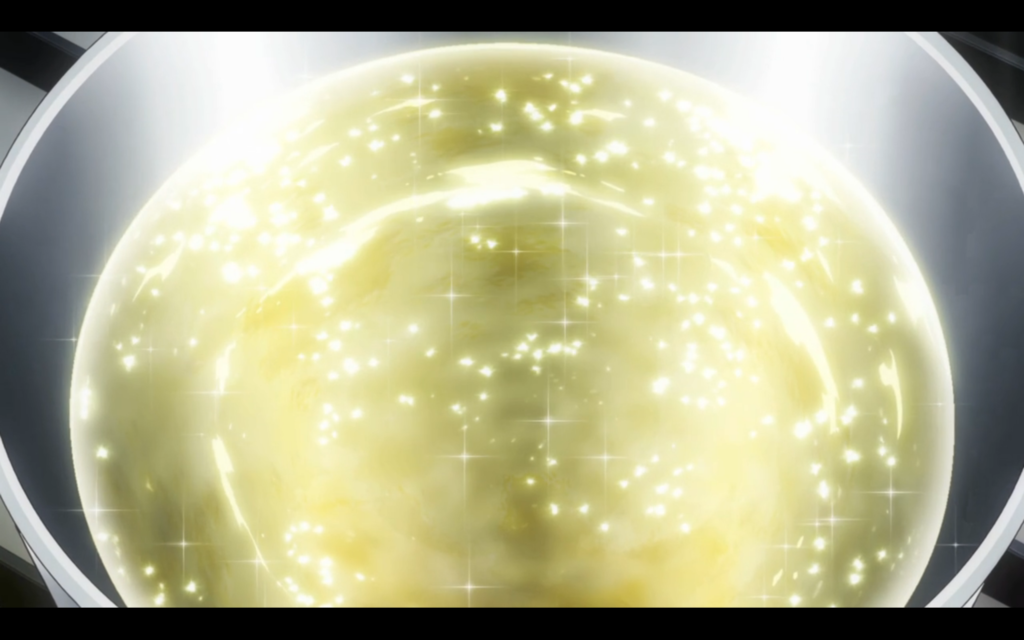 If the broth from your ramen doesn’t look like a shiny pool of angel’s tears, throw it out; you’re doing it wrong.

Megumi, who has grown a helluva lot of backbone, fights back with a light-broth ramen that leverages the umami punch (sigh) of dried vegetables and lesser seafood instead of shrimp and lobster. It sounds like Megumi’s ramen wouldn’t be able to compete with Ryo’s rich, luxurious broth, but the more subtle flavor of her dish has it’s own appeal. Soma says that Megumi’s trademark is bringing out the “subtle sweetness of vegetables,” but I think he’s wrong here; her special talent as a chef is her ability to take humble ingredients and make them delicious enough to compete with pricier fare.

Right before the ending credits, the show decides to pay homage to JoJo’s Bizarre Adventure and the two ramens become Stands, or Personas, or whatever the hell those monster thingies from JoJo’s are called. It would be one thing if it were a really quick lesson, but they really go all in with it and it’s pretty adorable– especially Badass Jojo-Style Megumi. 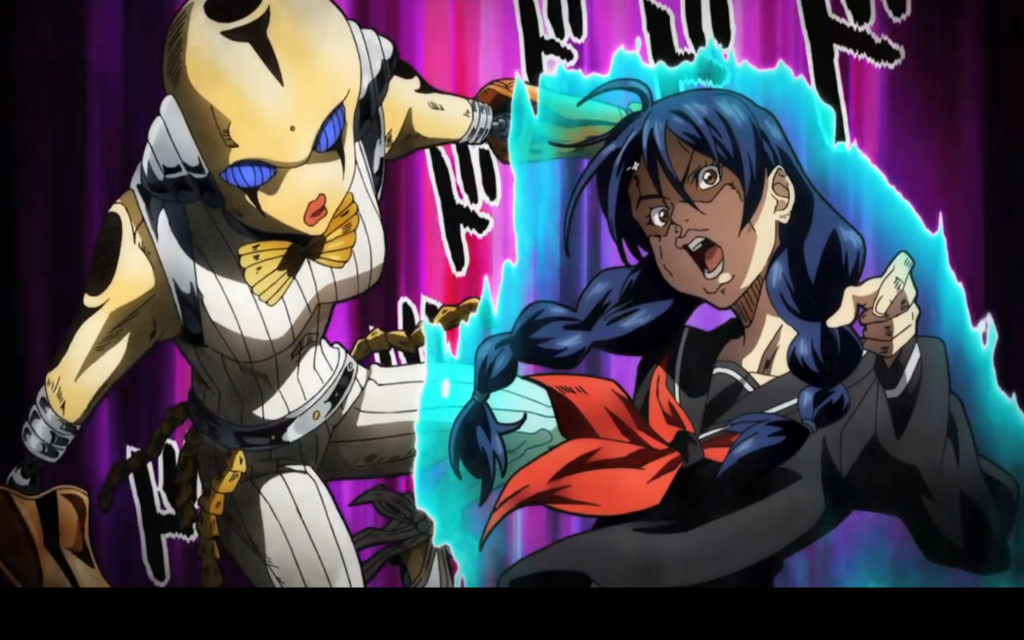 This would probably be funnier if I’d seen more than one episode of JJBA, but it’s still pretty funny. I like the fact that their “Stands” are actually their dishes personified.

Naturally we end on a cliffhanger, but I feel pretty sure Megumi’s got this; the problem with going for “strong flavors” all the time is that they can fatigue the palette, and it looks like the judges ate more of Megumi’s ramen than Ryo’s. I think Ryo is going to learn a Very Important Lesson about how trying to blow out everyone’s palette with dynamite is a kind of cheap way out, and then Alice will give him a really, really smug look, and then they’ll probably have sex, because I can’t imagine what else they see in each other. Or, Ryo could win just to throw us a curve ball and trigger more development for Megumi, but I’m pretty sure Ryo and Alice will still have angry sex either way.

Coming up, it looks like the next one in the Thunderdome is Erina’s mild-mannered secretary; I think her specialty is food with medicinal effects, something I find very interesting, so I’m definitely looking forward to that one.