Karen recently informed me that the new season of shows was coming out and I should let her know if I was interested in covering any of them. I told her (in all honesty) that I hadn’t been following the schedule and was open to suggestions. She asked me what I was looking for, so I requested something light and breezy…. 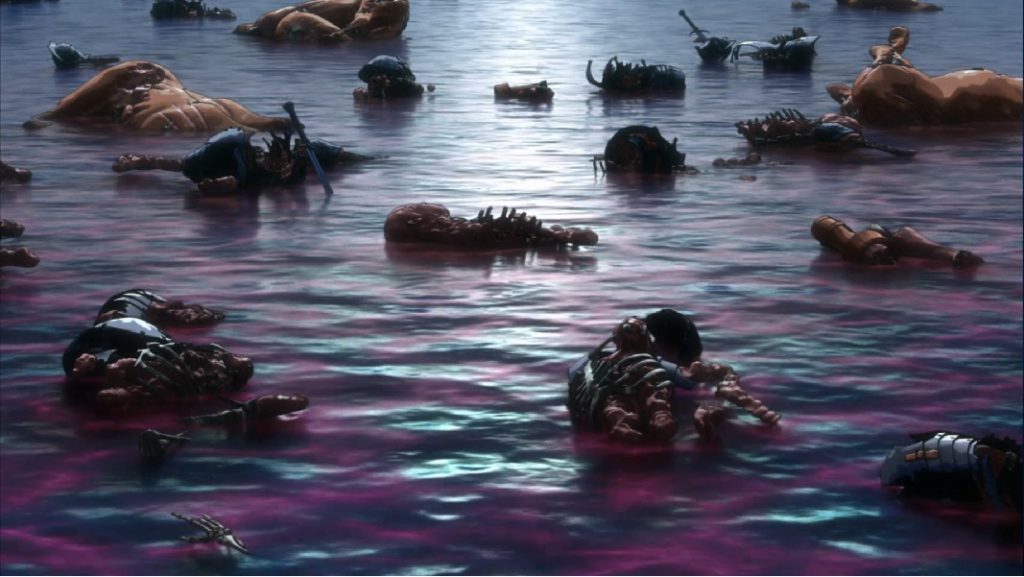 Ah yes, the opening scene of any cheerful and uplifting anime. Just the thing I needed to get myself into the proper, fun-in-the-sun mood for summer.

In all seriousness, I’m a fan of the 1997 series and ecstatic that Berserk is being animated again (albeit in a weird style that makes me feel nearly as uncomfortable as episode 25 of the previous series did). Episode 1 does not disappoint, but it does show that, once again, the anime will not always follow the manga. One of the things I’m most interested is how the writing will (or won’t) be interwoven with what was shown the 1997 series.

The first scene is clearly aimed as much at manga readers as first-time viewers: many important characters are revealed briefly. However, if I didn’t know better, I’d think the fine swordsman-in-black walking towards the camera was the Hawk of Darkness; odd segue. In a throwback to the 1997 series, the opening credits summarize the history between Guts, Griffith, and Casca. If I had to complain about something in this episode, it would be the decision to deform Puck’s appearance so soon after introducing him (not that I really think it should ever happen).

While left-Puck could use some pants, right-Puck seems to need a slightly larger slice of the budget (which should be available considering the money they saved on pants).

At first glance, Puck seems out of place in what is otherwise a serious and violent setting where nothing is sacred. However, you quickly realize that Puck’s character is needed to balance against the endless waves of darkness and evil. Puck’s ability to revert to his happy-go-lucky self shortly after horrible experiences contrasts Guts’ method of dealing with adversity: be too much of a badass to ever get shaken.

One scene does show, however briefly, that there is still a shred of humanity within Guts. While it’s fun to imagine him as an unstoppable machine, he’s just a man who’s been to hell and back again (I dare say literally), and will most likely need the support of others both to help manage the road ahead and to help him with his own internal struggle. And he has a really big sword (the late in the episode reveal was a nice anime-only touch). 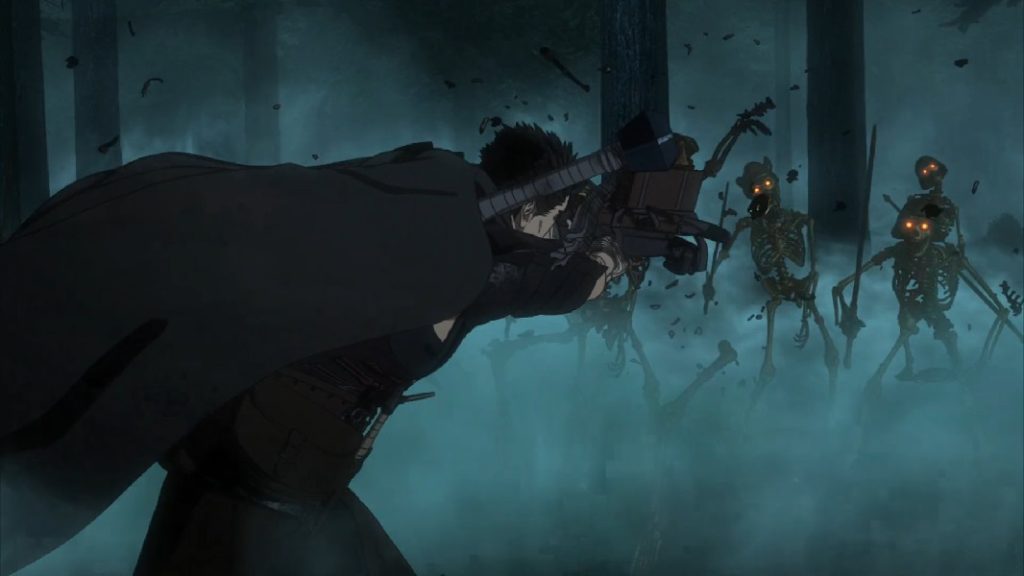 [Adam didn’t send in a caption for this one, so I’ll take over…except I don’t watch Berserk and I have no idea what’s going on. This looks scary; I’ll be over here watching New Game! and leave the rampaging, putrifying skeletons to you brave people. -Karen]

Puck: You should run!
Guts: You’re free to go, if you want.
Puck: Why? What’s the point? There are so many… you’ll get yourself killed!
Guts: That’s nothing new.