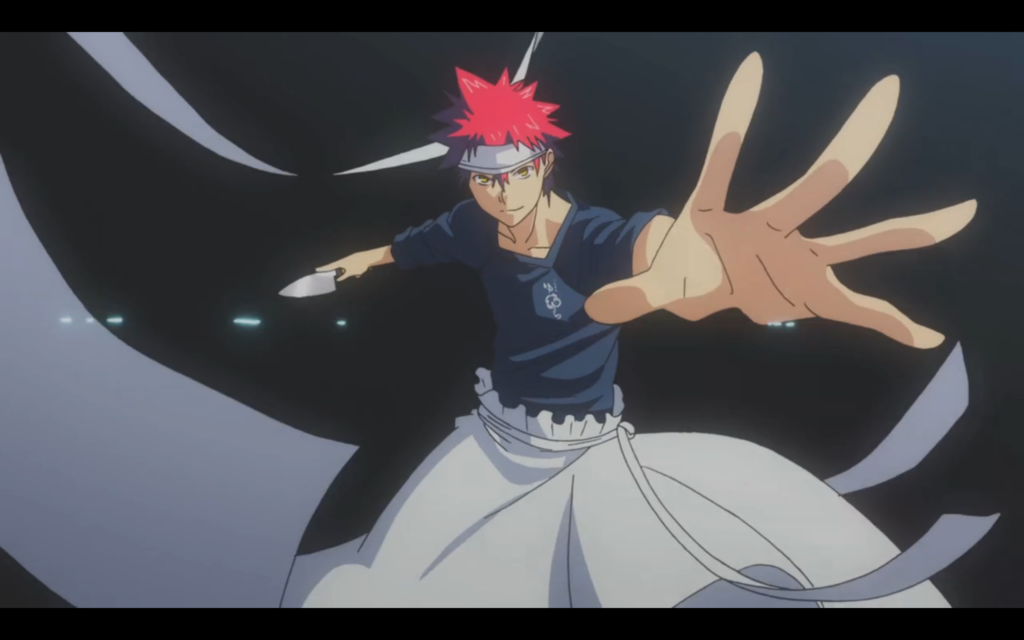 Anyway, between this and the adorably delectable Sweetness and Lightning, I’m probably going to gain about 50 lbs. this season just from looking at all the animated food; I guess my perfect beach body is going to have to wait for next summer, once again.

In case you’re new to Food Wars, here’s the situation: Yukihira Soma is an upstart diner cook who lacks the fine-dining training of his fellow students at the prestigious Totsuki Academy. However, he does have the ability to make anyone who eats his food have extremely vivid hallucinations, and this capacity for mind rape, as well as an appreciation for the many charms of down-home cookin’, has gotten him pretty far in life. He’s probably going to end up marrying Nakiri Erina, known as The God Tongue for her ability to taste precisely which cave rock salt was mined in, and their kids are going to be able to make peanut butter and jelly sandwiches like you wouldn’t believe. Soma is now in the finals of his school’s Autumn Elections (what it has to do with elections, I couldn’t tell you), and his first opponent is molecular gastronomy whiz kid Nakiri Alice, Erina’s half-sister. 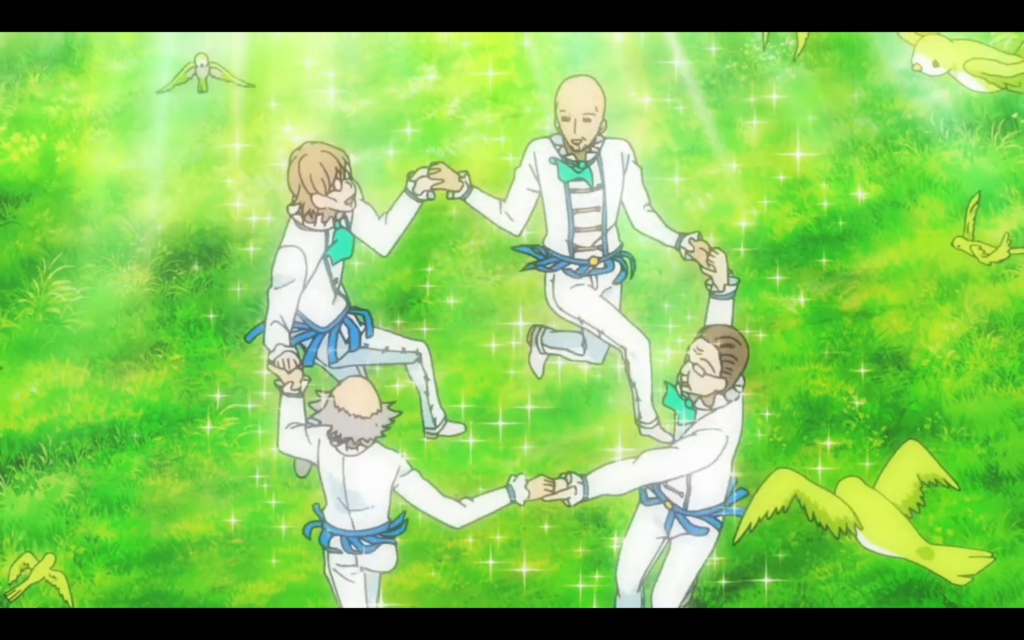 This is what happens to people who eat Soma’s food; they are transported into The Sound of Music.

Now, I have nothing against molecular gastronomy on general principle; finding new ways to prepare and serve food is fun, and it can add a lot of creativity to cooking. However, if I’ve learned one thing from Top Chef, it’s that everyone who practices molecular gastronomy extensively becomes, for some strange reason, a complete unmitigated asshat. Everyone who uses these techniques acts like they’re the second coming of Paul Bocuse, and it’s like dude, you took lentil soup and made it into a cold gel instead of a warm liquid; that’s nice but you’re hardly curing cancer here. True to form, Alice is an insufferable snob, and based on her creepy red eyes, possibly some kind of succubus as well. 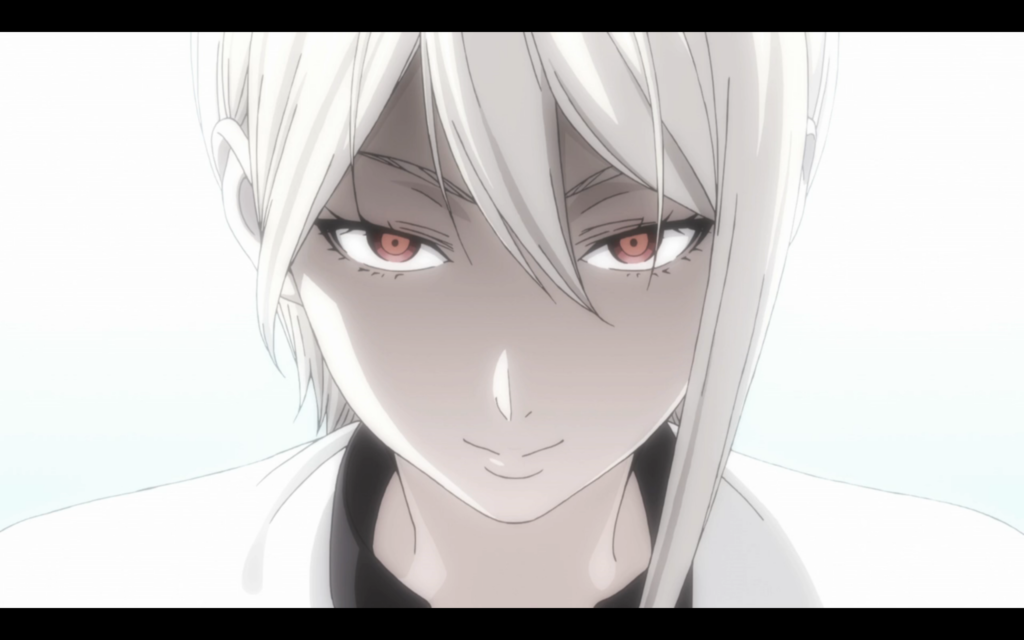 They kept this shot up for about three seconds too long and it was hella creepy. Molecular Gastronomy is for vampires.

I was surprised to see that Alice was going to be Soma’s opponent in the first round, since the first season built her up to be a pretty serious adversary; I figured he wouldn’t get to take her out until much later on. Nevertheless, the two are assigned bento as a theme, and the potential to load the box with gimmicks seems to play right into Alice’s pale hands. I think it’s cute that Soma was like “Oh cool, bento, something homey!” only to get smacked down by Erina for not realizing that bento is a Unique Food Culture and thus Serious Business. Everything is low-class chow until food snobs decide they like it, then it’s all “culture.” I’m just waiting for dunking chocolate chip cookies in apple juice to be declared cultural, because I need more encouragement.

Moving on, Alice makes a sushi bento box that looks pretty damned delicious, and makes me want some good sushi. My personal favorite kind of sushi is a shrimp tempura roll, something Alice would probably turn up her nose at, but hey, that’s why she’s the enemy. She uses more hi-tech equipment than NASA has these days, and reactions to her insanely over-thought dish are favorable. The show wants us to believe that all of these technical bells and whistles Alice uses actually enhance the flavor of food rather than just looking cool, but I have my doubts that this works in reality. 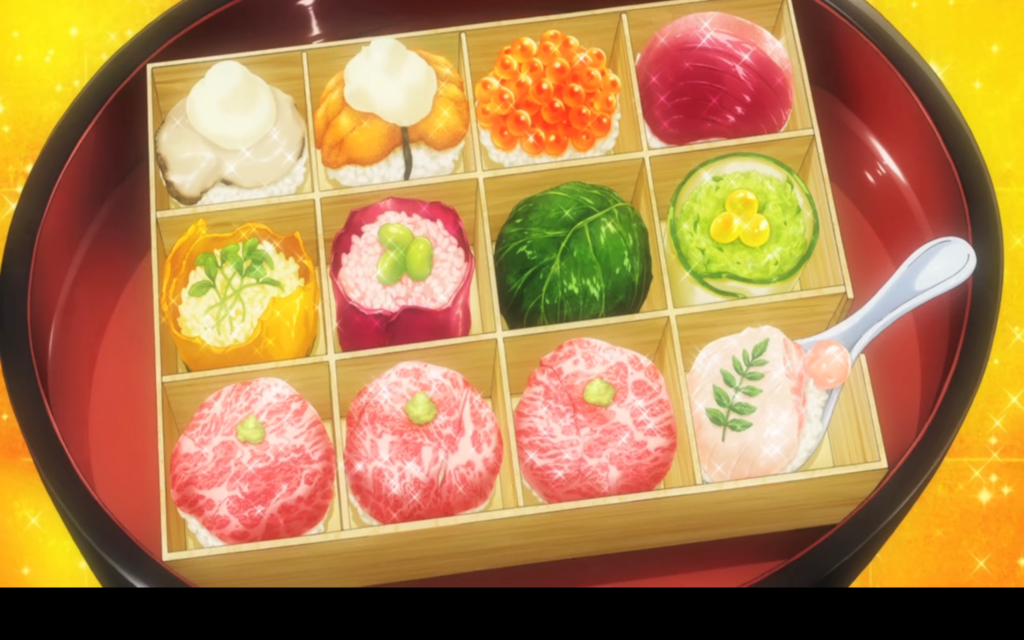 I may not like Alice, but I would be lying if I said I wouldn’t gobble this up. It’s been too long since I’ve had really good sushi. Why does it have to be so expensive?

Soma of course makes a down-home bento that has just enough sophistication to surprise the judges, but really succeeds on depth of flavor rather than flash. Interestingly, Alice pretty much says point blank “Is this the part where you’re going to tell me that food needs to have Heart?”, hanging a lampshade on where this story typically goes. However, Alice’s grandpa (who is also Heihachi Mishima of Tekken fame; there is no logic to this, he just is) points out that the issue isn’t heart, it’s understanding the essence of the dish. Soma’s bento was something that worked as a bento first and foremost, whereas Alice’s dish was just a box that happened to contain a bunch of tasty stuff. Which…kind of sounds like heart, actually. I do understand the distinction, where “heart” is a mushy feel-good concept that doesn’t really mean anything, but understanding the particular merits of a format is essential in cooking competitions. Still, Soma ends up winning because he celebrated the Soul of Bento, and Alice was too arrogant to fully embrace the format.

So…it’s all about heart, guys. Don’t listen to Heihachi when he says it isn’t. I just hope Soma finds more novel ways to defeat his opponents, because a whole bunch of episodes of “but only Soma truly CELEBRATED the form of the Turkey Pot Pie!” is going to get old. I honestly don’t remember how they dealt with this during the first season.

Next up, shy Tadakoro Megumi us up against…Goth Kid? Okay, I really don’t remember the first season all that well. I do remember Megumi butchering a giant fish that was bigger than she was, so I hope she does more of that; imagine they bring in a giant whale on a hook, and then people are like “you can’t cook a whale, they’re endangered!”, then Heihachi is like “LOL this is Japan you fools, if it’s in the ocean it goes in my face,” then Erina is like “Grandpa, put your pants back on,” and Soma is like “We used to serve whale sandwiches at my diner on Tuesdays,” and Soma’s dad is like “I’m going to let you in on a little secret, son: it was never really a diner. It was a haute cuisine restaurant in trashy diner clothing,” and Soma is like “Oh My God my whole life has been a lie.” 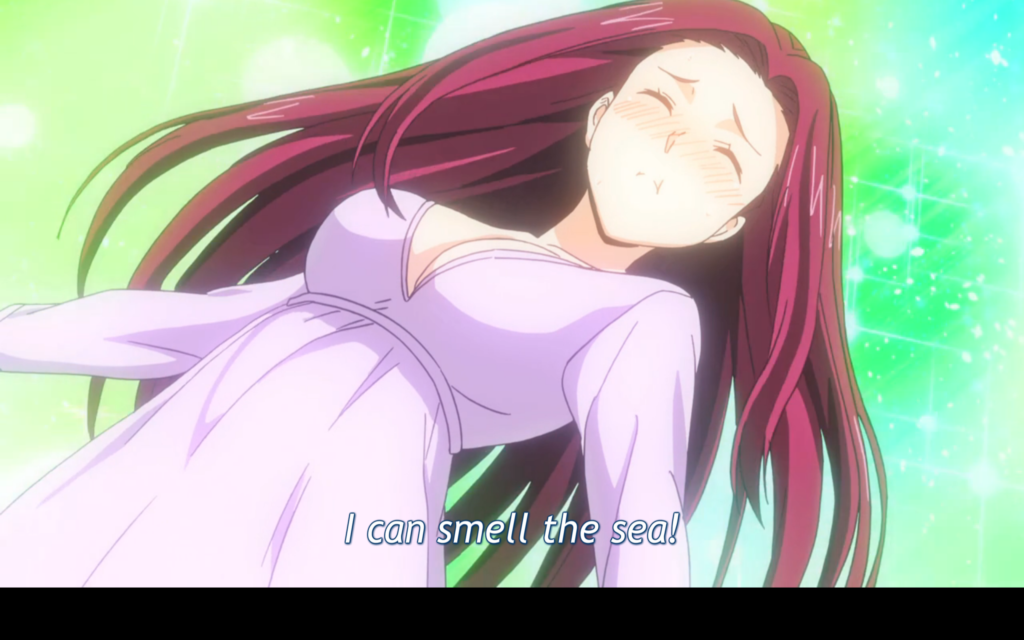 Here it is, the patented Food Wars! “assaulted by the FLAVA!” reaction shot! I missed this. Alice gets one too, and hers is topless…maybe I should have screencapped that one instead.