Four times a year, dozens of young, bright-eyed anime characters are set loose upon the world. As joyous as this miracle of nature is, sadly, every season many characters are deployed to the wrong shows, leading to much unnecessary stress and existential angst. For the cost of just one Cup Ramen per day, YOU can send an anime character to where they’ll truly thrive; away from the unappreciative jerks on their own shows.

Let’s learn more about this season’s crop of unfortunates, and what you–  no, what we ALL– can do to help. 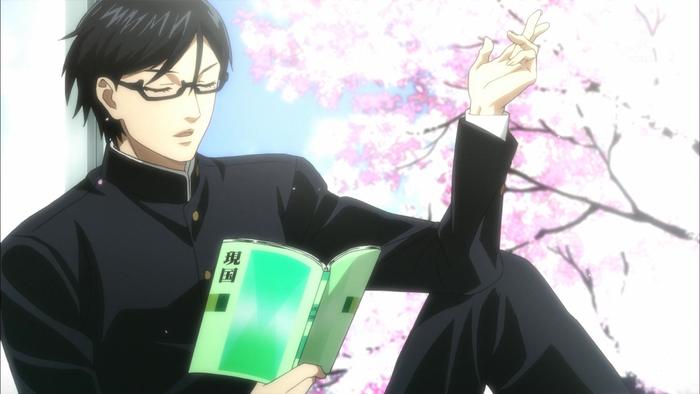 Sakamoto may seem like the definition of awesome, but consider who he’s holed up with: a bunch of delinquents who are so non-threatening that they think kidnapping someone’s ruler is the height of intimidation, and three dudes who bounce a ball around for hours on end because they can think of literally nothing better to do. In this company, perhaps it’s not surprising that Sakamoto not only seems Cool, but Cooler and Coolest as well.

With their ability to seamlessly hide carrier pigeons in three-piece suits and transmit perfect Morse code even when drugged up on horse tranquilizers, the spies of Joker Game are cool enough to give even Sakamoto a run for his money. In this challenging environment, Sakamoto will have to learn and grow, reaching new levels of awesome that even he didn’t know he possessed.

But that’s not all this move will accomplish. See, the coolness of Joker Game is somewhat dampened by the fact that it takes place during World War II, meaning that even if it’s not on screen at the moment, you just know ridiculously awful shit is going on all over the place. That’s the genius of this transfer: if you send Sakamoto back to 1937, all the atrocities of World War II will never happen. Given the effect Sakamoto has on all humans he encounters, the entire Pacific Theater will just become a contest to see who can make the coolest pose next to a B-17, who can make the best gourmet meal out of scavenged MRE ingredients, or maybe who can take the best photo with a rare tropical bird perched on the tip of their rifle. The United States will only enter the war because it’s jealous that everyone else is getting so much attention from Sakamoto; all those European concentration camps will become “Let’s Concentrate on Getting Sakamoto To Notice Us” camps.

So basically, if you don’t support moving Sakamoto to Joker Game right this instant, it can only be because you are a Nazi. 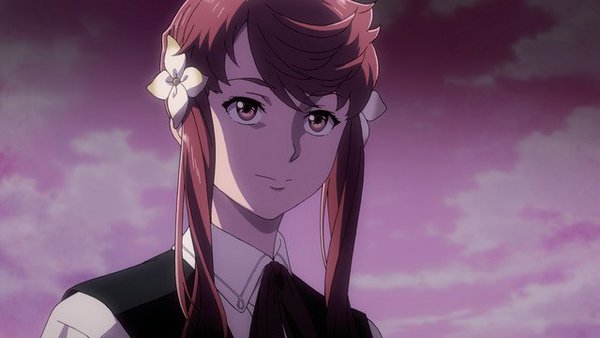 No one should be mind-controlled; it’s just not a nice thing to do. However, if for some reason your immutable destiny is to have your will co-opted by some outside force, who would you rather be controlled by: A) a clueless, sister-banging teenaged asshole B) that guy’s dad, or C) a cute ocean chinchilla? I think it’s clear that C is the only sensible choice.

Besides, Rin won’t even be inconvenienced too much by the scourge of Ocean Mind-Control Rabies that has taken over the oceans of HaiFuri. Think about it: as far as we know, the main thing the pink-eyed alien chinchillas make people do under their influence is to fire every large weapon in sight, which is exactly what Rin would do anyway if left to her own devices. Besides, there’re about forty thousand girls in High School Fleet, so deranged-assassin Rin can go on a killing spree and off like 70 of them before anyone would notice or care.

And she’d still be a better captain than Mike. 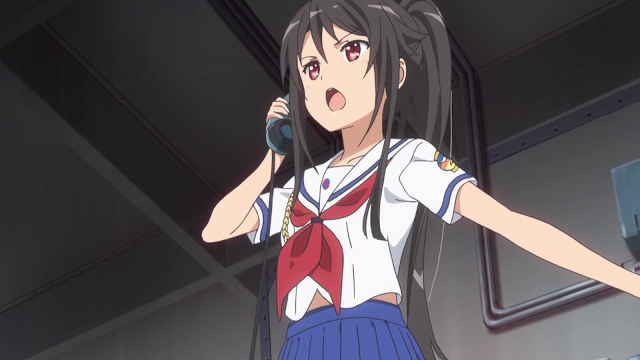 Since Mashiro is pretty unlucky, it would be criminally irresponsible to leave her on the Harukaze now that there’s an immortal assassin around; she’d be the first target for sure. Instead, we’re going to send her to the world of Anne-Happy, where she can learn what it means to be truly unlucky. Little miss pampered ojou-sama needs some perspective, methinks.

Oh Mashiro, you think you’ve got it bad because you slipped a row when you were filling out the scantron on your entrance exam? Well, that’s nothing compared to what happened the last time Anne took an exam: not only did she get a splinter in her thumb from her pencil, but rabid vampire bats flew in the window of the school building and bit her in the face, then a support beam fell on her desk due to faulty construction, then the school’s boiler room somehow exploded in boiling fat and ruined her uniform. Anne’s only comment? “I passed with two points to spare!”

That’s how a truly unlucky lady rolls, kiddo. Now, Ms. Munetani may feel out of her element on dry land, but consider this: it’s only a matter of time before Anne’s presence causes a massive, city-destroying flood and they’ll all be going to school on small boats. There’s much less culture shock involved here than you might think. 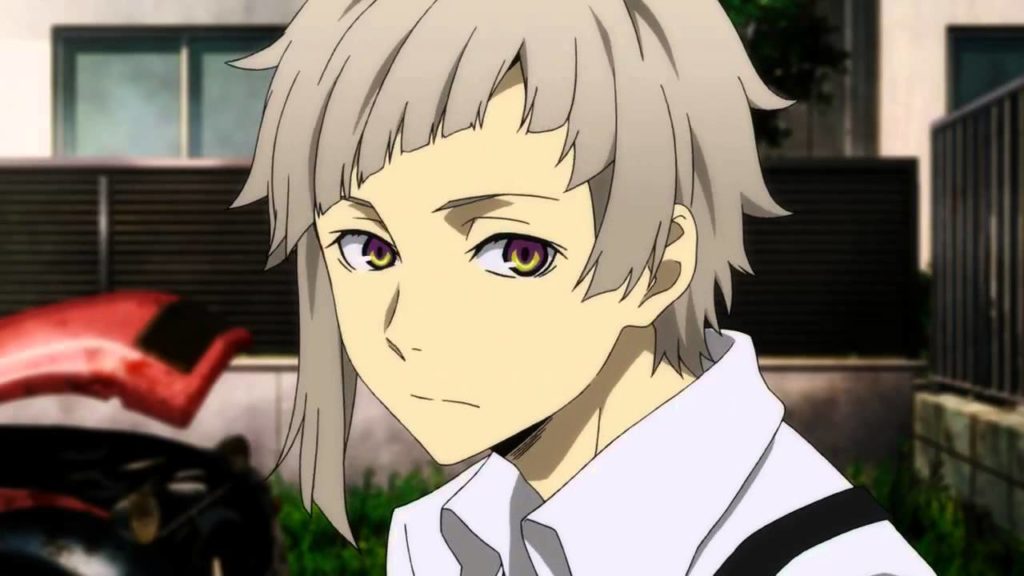 Innocent boy-weretiger Nakajima, with his cute little belt-that-looks-like-a-tail, has had a pretty hard time in life. Ostracized for a power he didn’t ask for and can’t control, all Nakajima wants is good food and a place to sleep where he won’t be kicked out for his shape-shifting tendencies. Unfortunately, on Bungo Stray Dogs, he’s ‘forced into some bizarre turf war with a bunch of Tommy-gun wielding Mafia thugs just to earn his keep, plus he has to deal with a bunch of famous “authors” who all have massive egos even though they’ve never actually written a damn thing in this continuity. It’s just a rough deal all around.

Enter the kids of Flying Witch, where they love lycanthropes so much they actually make enchanted candies to turn people into animal-hybrids for some reason that is never adequately explained. Besides, they never really do anything on Flying Witch besides fly around, eat fresh-picked wild vegetables, and take aimless walks around the neighborhood, making it a perfect assignment for a guy who just wants some goddamned peace and quiet.

Frankly, being assigned to Flying Witch is like getting a Golden Ticket to Willy Wonka’s Chocolate Factory for any self-respecting anime character, so there’s always going to be a temptation to send every misplaced person there. However, as a kind of anime welfare state, Flying Witch can only handle so many refugees from other shows, so let’s be careful not to destroy their culture in our attempt to help the least fortunate. </salient political commentary> 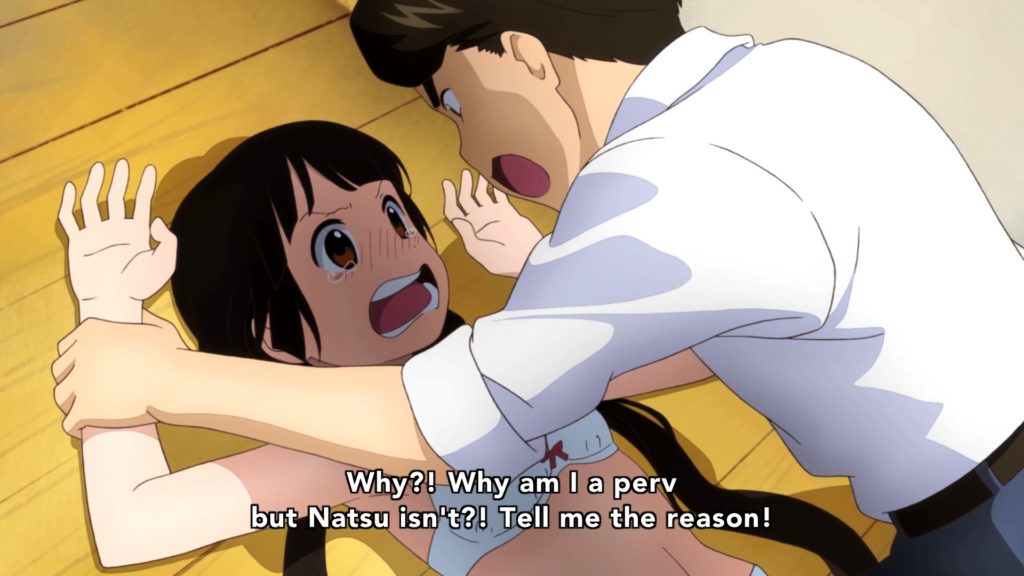 The remote Kumade Village is filled with sweet, wonderful people (and bears) who keep Japan’s oldest traditions alive while struggling to learn how to operate regular household appliances. Except for Yoshio, a sex offender who can’t keep his hands off of his 14-year-old cousin and will apparently feel up any woman nearby, except the one who actually likes him for some reason.

Honestly, what Yoshio has probably isn’t curable, so we should do the next-best thing and send him wherever he can do the least damage. In the world of Super Lovers, all women are either ice-cold bitches or deranged sociopaths, so no one’s going to be too concerned if Yoshio gets all up in their business; frankly, those women are so hardcore, he’s likely to lose a hand the first time he tries anyway. Seriously, the women in Super Lovers are all so unlikable that the title of Best Girl was given to the Pomeranian, who is a boy.

Of course, in such an environment, Yoshio might decide to start playing for the other team…in which case, local sex machine Haru is even more shockingly inappropriate than he is and will likely respond in kind. Best case scenario, we fight fire with fire and take two sexual predators off the streets of Tokyo when their love hotel mysteriously explodes. 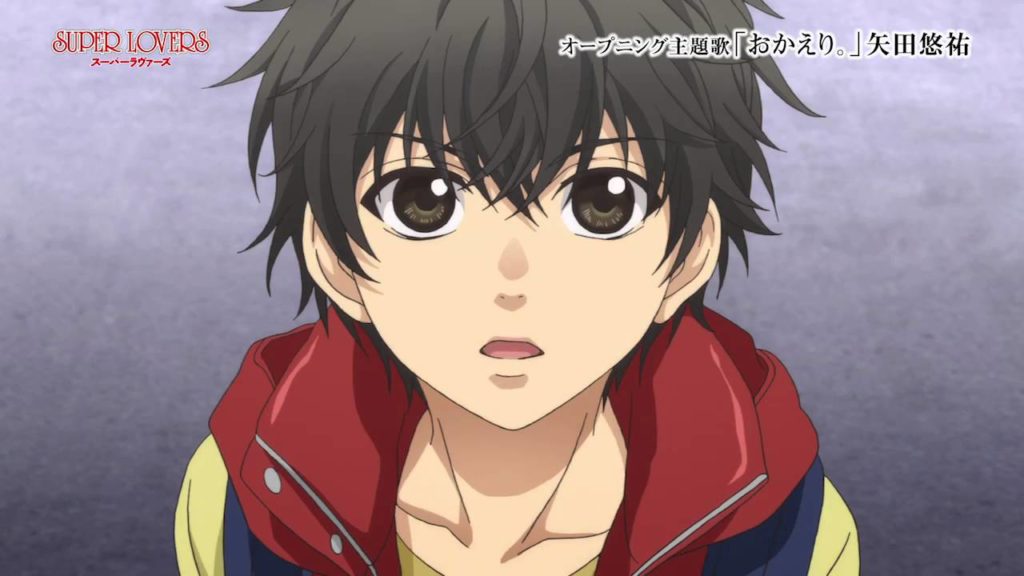 Speaking of Haru, it’s nice that he’s trying to be such a caring big brother to orphaned Ren; or it would be, if he wasn’t confused and didn’t think forced kissing and pinning Ren to the bed was somehow a normal part of brotherhood. Poor Ren: first he has to grow up in Canada, a remote pastoral wilderness with no people, populated only by wild beasts (you’ve probably never heard of it); then his adoptive brother acts like they’re in some kind of BDSM role-playing competition whenever he gets drunk (and often when he doesn’t.) Adolescence can be a confusing time, you know?

Now, if we were to move Ren over to Shonen Maid, in Uncle Madoka he would still have the kind of handsome, generous big brother-figure that he’s used to, except I’m pretty sure that Madoka wouldn’t constantly be trying to get in his pants and then lying about it like a disingenuous sack of shit. Really, the worst Madoka is likely to do is sew Ren an incredibly cute outfit with bunny ears or something to wear around the mansion, and compared to what the poor boy has endured, in the wilds of Canada no less, that’s like water off a duck’s back.

There is the fact that Ren was basically raised by a pack of wolves and Madoka is deathly afraid of all things canine, but I think they could get around that; after all, Ren isn’t exactly the type to overshare. Ixnay on the olves-way, Ren. Also, coming from Super Lovers, where all women are just the worst (see above), it may take a while for him to warm up to Miyako, but I’m sure that could be accomplished with enough therapy. Besides, Miyako’s smart enough to know to slip him treats under the table to win his affection.

Now, you might think that with a new boy in the house, things might be feeling a bit crowded for everybody’s favorite Shonen Maid, but that’s not a problem BECAUSE 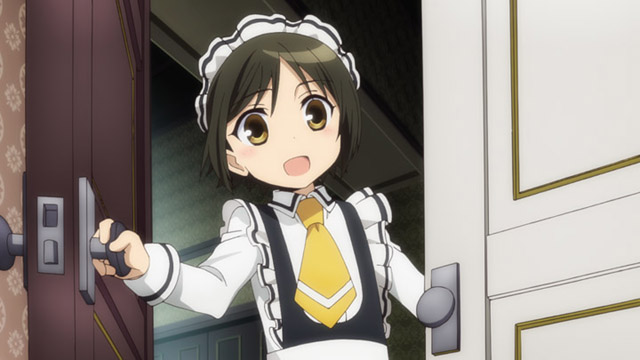 I don’t care how much he likes cleaning; making Chihiro clean that whole mansion by himself is child abuse. What Chihiro needs is a nice, petite suburban house that he can have fun cleaning thoroughly without wearing himself out too much. We have plenty of laundry, dusty corners and all of the other things that Chihiro loves to clean, and with a 7-month-old on hand, every day is a new game of find-the-expelled-bodily-fluids! Frankly, Chihiro could probably barely put forth any effort at all and just clean for five minutes whenever dinner’s on the stove, and that will still make for a monumental improvement to the overall cleanliness of my house. Please, someone, this is a cry for help….

Ahem, so, how about it, Chihiro? You won’t have to wear that stupid maid outfit, you can have your own room and all the Little Debbie’s Snack Cakes you can eat. Then, once you’re here, you can tell me just who the hell that is starring in the ED of your show; it’s the true mystery of the season. Not the secret of The Lost Village, not who keeps killing Subaru in Re:Zero, just who the hell are those dudes in the Shonen Maid ending? That’s the question that’s been keeping me up nights….

That’s it for this round of Anime Rescue; come back next season, when I’ll likely send everyone over to S2 of Food Wars! and they’ll all get super-duper fat.