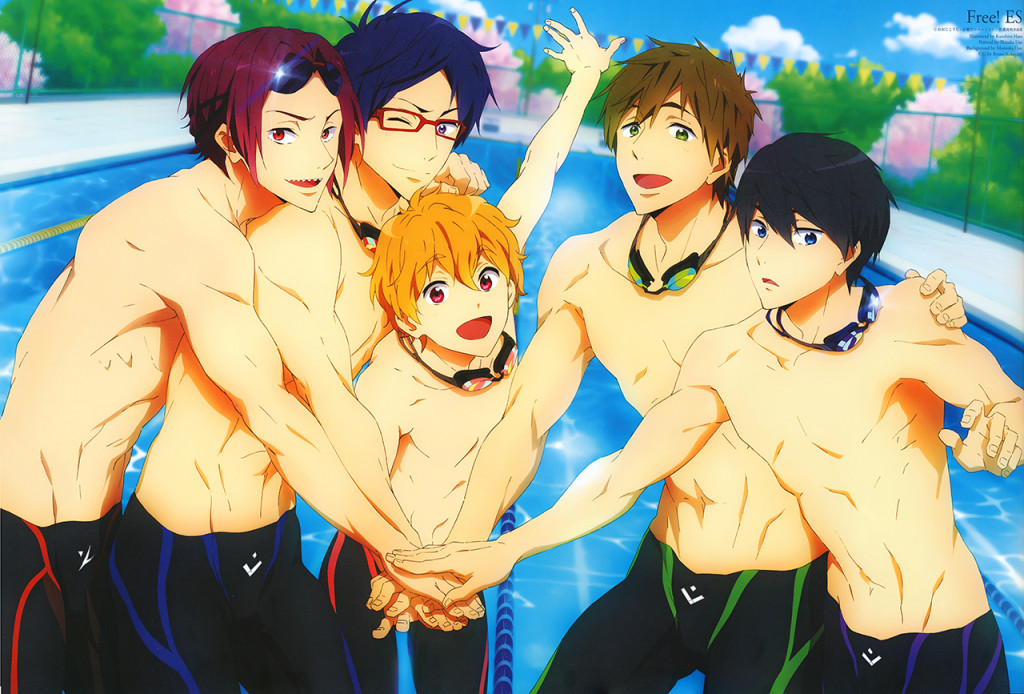 I didn’t keep up with the second season of FREE! while it was airing; I liked the first season well enough, but the second one felt a bit dull. However, in a recent burst of “Let’s watch all my unfinished anime series because that’s a great way to avoid doing real work!” sentiment, I picked up FREE!: Eternal Summer again and watched it to the end. It’s still largely a retread of the first season, but it does pick up and get more interesting during the latter half.

One thing I couldn’t help but notice was that the series, in general, presents the exact opposite of the so-called “toxic masculinity” that many media critics complain about. The show is full of guys being empathetic, talking to each other about their most deeply-held feelings, expressing high levels of affection for each other, and relying on each other for emotional support rather than trying to go it alone.

Some people have said that as a product of a studio known for producing shows about cute girls being friends, FREE! is just a gender-swapped version of that; that the boys of FREE! are just the plucky girls from Afternoon Tea Time dressed up in impressive muscle suits. I think there’s some merit to that idea– KyoAni has developed a particular style when it comes to depicting a kind of idyllic high school life populated with cute people, and FREE! has that in spades– but on the other hand, it’s pretty darn sexist and depressing when you actually think about it. “A show about guys being emotional and affectionate? That’s not believable– they’re just girls who are drawn to look like guys!”

There’s also the fact that the so-called “male gaze” is completely inverted; male bodies are seen as objects of desire, both to appeal to female viewers (which has been widely recognized and commented on), but interestingly, even within the world of the show itself. Gou, the team’s female manager, likes looking at men’s muscles, and we sometimes see things from her perspective; however, while several male characters express interest in her, she seems to have zero interest in a relationship. She appreciates men for their bodies, full stop.

This was all true of the first season, but what’s especially interesting about Eternal Summer is that the closest thing the show has to a villain is also the closest thing the show has to traditional masculinity. Since the shark-toothed Rin dealt with his issues last season and is now on the side of the angels (err, dolphins?), stone-faced Sousuke steps in to serve as the boys’ antagonist. Sousuke is terse, tends to keep his feelings to himself, speaks in a voice so deep it makes metal vibrate, and tries to carry all his burdens alone without relying on his friends for support. When he and Rin finally have a major confrontation late in the show, Rin chews him out for trying to be so masculine.

Okay, Rin doesn’t literally say “Why are you trying to be so masculine? Keeping all your negative feelings inside, without asking for the support of people who care about you, is creating this toxic, festering wound– symbolized by your shoulder injury– and it’s making you act like an asshole and drive people away. Your (traditional) masculinity sucks!”, but I feel pretty comfortable in asserting that the subtext is there. It’s especially strong coming from Rin, who was the closest thing the show had to traditional masculinity during the first season. Rin is almost incredulous while reaming Sousuke out, like he can’t believe that someone as strong as Sousuke still believes in this so-called masculine bullshit that he himself got over last season. 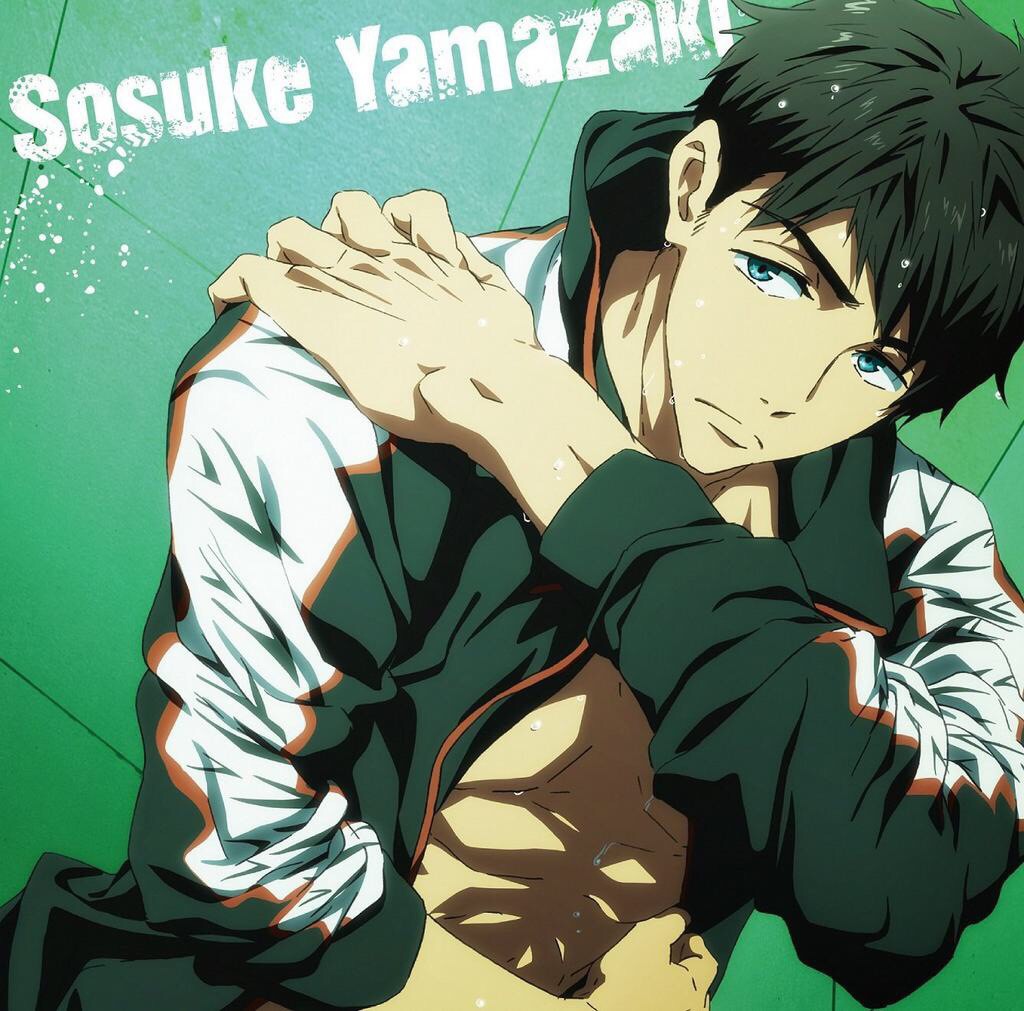 Not showing your deepest feelings like a proper FREE! boy? GIT GUD, son.

That’s not to say that the boys in FREE! live in this world of perfect emotional maturity; they do, at times, act like teenaged boys. Late in the show, Rin’s angst about having to share a hotel bed with Haru is typical teenaged insecurity; he knows damn well that there is no problem with sharing a bed with his old friend Haru (who is about as sexually aggressive as a postage stamp), but just the idea of sharing a bed with another male makes him uncomfortable and defensive. Nagisa, the most openly affectionate of the boys, is often chastised for calling everyone ‘chan,’ creeping them out with his presumed intimacy, even though they’re all pretty close to begin with. When Nagisa and Rei start bawling their eyes out, the brotherly Makoto taps them on the head and gently says “Hey stop crying– aren’t you men?”

Still, despite the occasional appearance of teenaged insecurities, in general the boys of FREE! (minus Sousuke) display an unusual emotional maturity; they know the importance of love between friends, and they don’t think that expressing their feelings makes them lesser in any way.

My question is, why has this not really been talked about? I know I’m making the obnoxious mistake of saying “Why isn’t the media talking about this?” when I am in fact part of the media and I’m talking about it, but still; I find the apparent dearth of commentary on FREE! intriguing. If you haven’t watched the show and just go by what anime critics have said, you would probably think that FREE! is just bait for shallow fangirls, and there’s nothing else notable about the show whatsoever. If toxic masculinity is such a problem that it needs to be brought up frequently when talking about media, why isn’t the replacement of it with this kind of warm, inclusive masculinity celebrated? Why aren’t people pointing at FREE! and saying, “this is what we want from our male characters in anime”?

Basically, if we have to constantly hear terms like “toxic masculinity” and “male gaze,” FREE! should be pointed to as an example of how to break out of the regressive mold and depict healthy male characters. Instead, the show seems to be treated as a basically harmless, but mildly embarrassing blight on anime to be deftly sidestepped by all intelligent fans. “Oh, the show with the swimming dudes that drives the fangirls nuts– hahahah, whatever.” Why? If this isn’t what socially conscious critics want, then what do they want? I’m all ears.

5 thoughts on “FREE! and Masculinity”