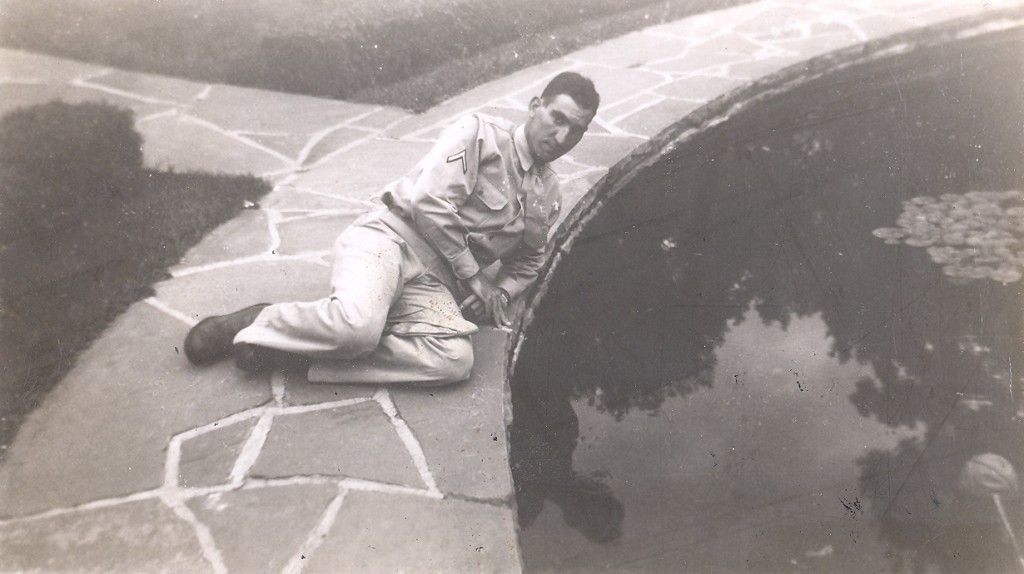 Recently, a relative discovered some pictures of my grandparents tucked away in an attic somewhere and mailed them to my parents. The above picture is of my Grandpa Carl (whom I’m named after), taken outside his barracks sometime during World War Two– probably 1943-ish. I never met him– he died years before I was born. But seeing pictures of him that I had never seen before got me thinking about a bunch of things…including the existence of anime and manga.

Which probably seems weird, but will hopefully make sense by the end of this.

Back to my grandpa, he was stationed in Italy for much of his service. For the rest of his life, he had a strong association between “Italian food” and “my friends suddenly dying,” so he wouldn’t have any Italian food in the house while my Dad and his brother were growing up; I’m not sure if my Dad even got to have a bowl of pasta until he was old enough to vote, but that’s neither here nor there. More importantly, after Italy, he was expected to go to Japan for what was presumed to be, at that time, a brutal ground invasion; he did not anticipate coming back. Apparently, none of his (remaining) friends did.

Of course, if there had been a ground invasion of Japan, and he had survived, it boggles the mind to wonder what kind of associations he might have had with Japanese food, but I’m probably the only person genuinely amused by that idea.

In any case, the A-bomb happened, the Japan land invasion that was expected to be “like Normandy, only you know, worse,” was called off and my grandpa was surprised to find himself at home and alive. He went back home to Lower Manhattan and his wife (in that order?), and my Dad was born in 1946; my Dad is, in many ways, the quintessential baby boomer. 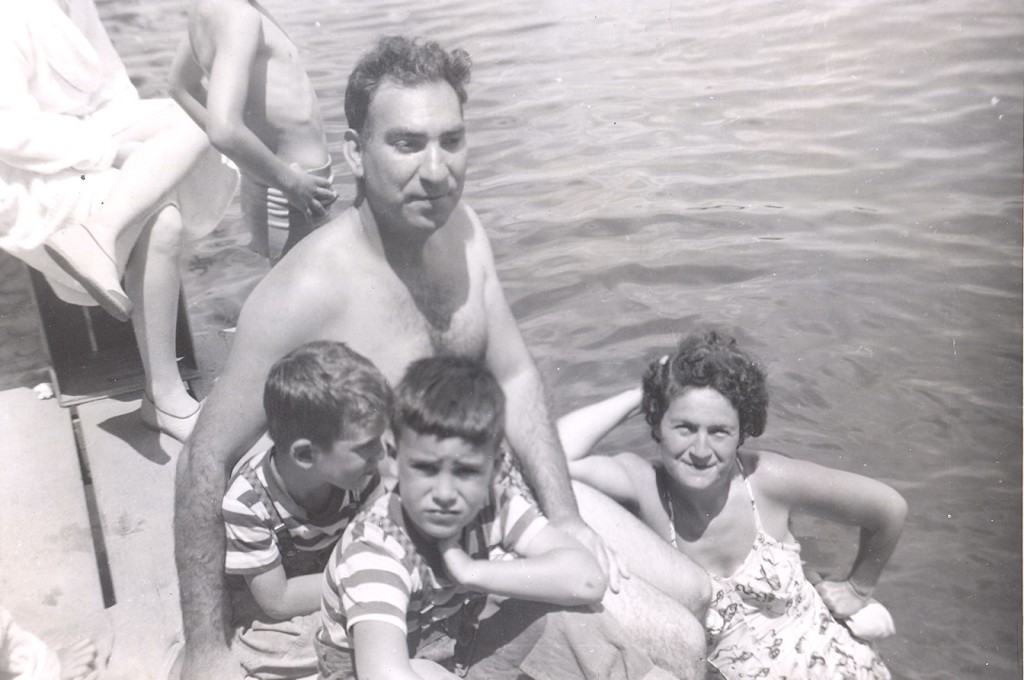 One happy family, all thanks to the A-bomb! My Dad is the one in front who looks like he’s not enjoying the 1950s very much at the moment.

It wouldn’t be an exaggeration to say that I owe my existence to the use of the Atomic bomb on Japanese civilians; without it, the invasion of Japan would have happened, my Grandpa likely would have died (or at the very least, returned from the war a much different person than he was in this timeline) and my Dad wouldn’t have been born. Then there would be no me either– but of course, in such a timeline there would likely be no anime and manga, so at least I wouldn’t be missing out on much by my failure to exist, but I’m getting ahead of myself.

Now, I like existence, but I don’t think the use of a weapon of mass destruction on a civilian population was worthwhile BECAUSE I exist; my whole generation may be a tad too narcissistic, but believing that would be pushing it, even for a millennial. No, in abstract terms, I really don’t think it’s morally acceptable to use such a weapon on civilians, ever; yet if it hadn’t happened, I wouldn’t be here, and that’s all there is to it. I’m sure there’re some mental gymnastics I could do to try to reconcile this, but I’m not doing them and I refuse to do them; it is what it is.

But more important than my existence (hard to imagine, I know) is the fact that I’m pretty sure otaku culture, as we now know it, also would not exist if the ground invasion of Japan had happened. The stereotypical anime style “big eyes, small mouth”– came about because artist Osamu Tezuka watched the Disney movie Bambi in Japanese theaters over and over again, happily sketching and creating a stylistic shorthand for his manga that would go on to define an entire subculture. I find it hard to believe that in a world where America and Japan had fought a bitter land battle, a young Japanese man would be in a position to happily watch an American cartoon in the cinema multiple times and take artistic inspiration from it. In fact, in a scenario where the Japanese of WWII really did fight to “the last Japanese,” or anything even approaching that, what would have been left of Japan by the time Tezuka was primed and ready for his Bambi phase?

Going beyond Tezuka (although it’s always tempting to lay the genesis of manga at his feet, since he was so influential), the entire culture of young men growing up drawing comics in Japan was a product of the Marshall Plan, and thus the atomic bomb. I read Yoshihiro Tatsumi’s A Drifting Life, which is all about growing up in postwar Japan and becoming immersed in comics as a way to escape from a rather dull, demoralizing existence. Life in postwar Japan was far from cushy, but Tatsumi and his contemporaries had a huge advantage; that of not starving to death. True, they had plenty of spare time to attack the tedious, repetitive task of drawing comics (or Comics: Where Free Time Goes To Die), but they also had the freedom to do so because they generally knew where their next meal was coming from. In a timeline where Japan and American fought a bitter land war, there would have been no Marshall Plan, and the time spent drawing genre-codifying comics for a generation of Japanese youth would have instead likely been spent trying to figure out which bugs were the most edible with a little soy sauce.

The otaku culture of today, with all its animated entertainment, sophisticated games, and other audio-visual productions of varying complexity, grew out of the manga culture of the ’50s and ’60s that men like Tezuka and Tatsumi pioneered. So I think it only stands to reason that, in the absence of the Marshall plan and general US goodwill towards Japan at that time, there would have been much more limited, if any, manga culture, and the other cultural offshoots wouldn’t have developed anywhere near to the extent that they did. Just like myself, the otaku culture that I blog about (well, sometimes; I haven’t been watching much anime lately), is also a product of horrible weapons being used on Japanese civilians.

My fear in writing this is that some may think my point is “Look, that nuclear weapons business was unpleasant and all, but ultimately it was all worth it because we got Sailor Moon!” No, not in the least. I’m not pointing out that otaku culture is a product of the bomb because I believe the world is better for it; maybe it is, but I’m not in any position to make that judgment; I don’t know what the alternative would have been. I’m pointing out that otaku culture is directly tied to the atomic bombs because I believe it’s the truth, and it’s a truth that American fans of Japanese pop-culture in particular often ignore.

For example, I noticed in college that anime fans were especially prone to become historical apologists for WWII-era Japan. It’s understandable; when you love a culture, even just a part of one, you want to see the best in it. But that would lead to statements like “I think dropping the atomic bomb(s) on Japan was wrong because I’m an otaku and I love Japan,” which is like…backwards logic, or perhaps sideways logic? Without the atomic bomb, there wouldn’t be an otaku culture for you to decide you love; in fact, without the atomic bomb, there might not even be a Japan anymore.

Of course, I didn’t write all this in the attempt to correct a few people I knew in college who didn’t really think things through. Lately, I see a lot of people trying to take a lot of morally complex things and reduce them to simple, us-or-them, with-us-or-against-us logic. To me, my very existence as a generally peace-loving American who loves modern-day Japanese culture shows the limitations of this thinking. As stated above, I think attacks like those on Hiroshima and Nagasaki are abhorrent and should be considered similarly to torture and genocide; things that should have no place in the modern world. However, not only would I not exist in a world where these abhorrent things hadn’t happened, I’m not sure I’d even want to exist in a world where they hadn’t happened– and how does that make sense? It doesn’t, because when you’re dealing with the biggest issues of morality, we run up against the limits of our capacity to rationalize things into shapes we can understand.

From all accounts, my grandfather was a complicated man; my Dad jokes that my Uncle Marty moved all the way to Australia just to get away from their father, regardless of the fact that said father was already dead at the time; maybe it’s not really a joke. Nevertheless, I’m proud that this was my grandfather; because I know my family fought for what was right in World War II, and for teaching me, through his very existence, just how complicated the world can be. Realizing the true complexity of moral judgments doesn’t give anyone license to throw up their hands and not even try to make sense of the world (though it is tempting); but it has led me to be very, very careful when it comes to making any kind of simplistic, absolute moral judgments.

And if there’s even an ounce of responsibility associated with being an American otaku whatsoever– beyond just watching our anime and playing our VNS– I’d like to think it’s that.

3 thoughts on “On Being An American Otaku”