When I wrote my “journalist’s take” on GamerGate a month or so back, my main point was that many games writers for sites like Kotaku and Polygon are just plain bad at their jobs; I didn’t think they were necessarily unethical, no matter what many gamers were saying. Since then, lots of new information has come to light and I’ve changed my mind about that: many of these people are seriously unethical. In a way, it’s not even their fault, since they’ve apparently never been held to journalistic standards before and thus don’t really understand what they’re doing wrong, but going into that is probably best saved for another day.

So, games journalists are unethical; but what does it matter? One sentiment I’ve seen repeated over and over again by those demonizing gamers is that even if critics of the games press are actually right about everything, it’s “only videogames.” That gamers are idiots for spending so much time and energy working toward a better games press, when that energy could be better spent doing pretty much anything else; That the people using the #GamerGate tag on Twitter have to be full of it, because there’s no way anyone could possibly care that much about games coverage and reviews– or, if they do care that much, that’s actually even worse, because seriously, who cares? Why does video game coverage actually matter in the grand scheme of things?

To be honest, game reviews haven’t mattered much to me personally for a while now. When I was in high school, I used to read Electronic Gaming Monthly cover-to-cover every month, but that was a different time; as I’ve gotten older, and my tastes have gotten more distinct (or inflexible, depending on how you look at it), my thought process as to whether or not to buy a game now looks something like this: 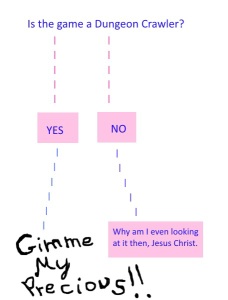 So yeah, I admit it: video game reviews are mostly useless to me. These days, when I read them at all, it’s usually to see what the outrage du jour is, out of a kind of morbid curiousity. (From what I hear, the latest is Polygon complaining about Bayonetta being too sexy, which to me sounds about as logical as complaining that The Rocky Horror Picture Show is just too campy, but whatever.) Assuming many gamers aren’t like me and actually do consider purchasing a wide variety of games, there are a lot of options these days; back when I was reading EGM, print mags were the only game in town. Nowadays, people can watch Let’s Plays starting from the day a game is released, or even get info and videos straight from the publisher. In fact, smart companies like NIS have turned sending copious info directly to the consumer into a kind of art form.

In other words, even if professional video game reviews suck, it still doesn’t matter much, because there are so many other ways to get information on new games nowadays. You can never visit any games news site, and still make well-informed purchasing decisions thanks to the wealth of information available from other venues. So, once again: why does “professional” games coverage even matter, with the wealth of alternatives available?

Okay, I’m just going to call it; it doesn’t actually matter. Videogame reviews, and the games’ press in general, simply don’t provide the same necessary service they did in the pre-broadband internet age, and if you dislike the way they’re written, you can easily– painlessly– avoid them. In tandem, people who do enjoy those reviews and find them useful aids when evaluating their potential purchases can continue to make use of them, even if they’re in the minority. The games press is simply that redundant.

However, even acknowledging this, I still care about the ethics of games journalism. Part of it is probably simple jealously; I worked my ass off when I was in newspapers, and it pisses me off that these people get to call themselves journalists while barely doing anything I would consider actual work. If they’re going to get away with claiming the title of journalist, the very least they can do is practice the bare minimum level of journalist ethics. And if they’re not going to call themselves journalists, then they need to stop with the high-and-mighty act, and admit that they’re no better than their audience; just another group of bloggers that happen to be lucky enough to get paid for it.

But my less-than-totally-generous personality aside, there’s another reason why this all matters: because it isn’t really about video game reviews at the end of the day. It’s about testing the ability of the consumer to demand accountability from those that disseminate information in the information age; to see if that’s even possible. It’s about testing the power of the extreme, authoritarian and entirely illiberal left, and figuring out how to challenge it when it harnesses the power of overwhelming shame and dehumanization to silence dissent. Basically, it’s a field test on how to fight back against any and all media that has been corrupted by a specific kind of ideology.*

In tandem with the “Why do you care about videogame reviews?” question, I’ve seen a lot of people say that if gamers care so much about ethics, they should instead be focusing their energy on the Fox News Networks and MSNBCs of the world; where corrupt, slanted media, actually does matter a great deal. Good point, but as far as I can tell, trying to reform the games’ press is a good first step to doing just that. If gamers can use their consumer power to institute better ethics in the games’ press, then those techniques may prove invaluable to improving other corrupt media– whether it’s gamers themselves doing it, or others who have learned from all the data gamers have gathered on the subject.

And if gamers can’t significantly improve the games press– a relatively tiny goal compared to the likes of cleaning up political journalism– then what does that say about the likelihood of holding the mainstream media to a higher standard? If the redundant, incestuous games’ press manages to shame its critics into compliance with the “everyone who criticizes us is a bigot/moron/misogynist, and you know it’s true because all of our websites say so over and over again,” strategy, what chance in hell does anyone have of taking on the kind of multi-billion dollar media empires that control far too much of our information?

Granted, some gamers currently embroiled in this don’t care about the bigger picture; they just want games coverage that does a better job of representing their interests. But even in those cases, I think there’s a large element of rebelling against clear hypocrisy from the media, rather than just caring about game coverage per se. After all, many in the media parrot an anti-capitalist narrative– the idea that we’re all controlled by big corporations with little power to advocate for ourselves. However, the minute consumers do start advocating for their own interests, they’re immediately told that their concerns are misguided, or that they’re horrible people for caring about consumer products and not spending their time on better things, or that they’re somehow being manipulated from the shadows by some sinister, malevolent force that they would definitely understand…if only they were a little smarter.

Larger concerns about media aside, I think many want to improve the games’ press “Because It Is There”: Because hypocrites told them it couldn’t/shouldn’t be done, and a lot of gamers couldn’t help but think “Why not?” In short, I think even those that aren’t necessarily rebelling against slanted media and corruption in the broader sense are rebelling against pure hypocrisy, and there’s something to be said for that.

So, no: video game reviews, in and of themselves, don’t matter. However, the ongoing consumer advocacy effort to improve video game reviews may actually prove to matter a lot, because it’s a valuable first step in a much, much larger endeavor. Is this really that difficult to understand? Because I get the impression that a lot of people are having trouble wrapping their minds around this.

*Some people would call this fighting back against SJWs; I’m hesitant to call it that, because I think it’s an oversimplification. The extreme, identity politics-obsessed left that many have dubbed “Social Justice Warriors” is a problem, but to me, the bigger problem is an ideology that cannot tolerate respectful disagreement, and the far right certainly has its own version of that. While the extreme left specifically is a more convenient target in terms of its stranglehold on specific forms of media (and academia, even more so), the real evil here is the ideology of painting one’s opponents as bigots, morons, or in some other way sub-human, rather than engaging in meaningful discourse.

In fact, you can make the argument that it’s a fight against the tribalism inherent in politics itself, although that does undermine my earlier point that this is about any specific ideologies.