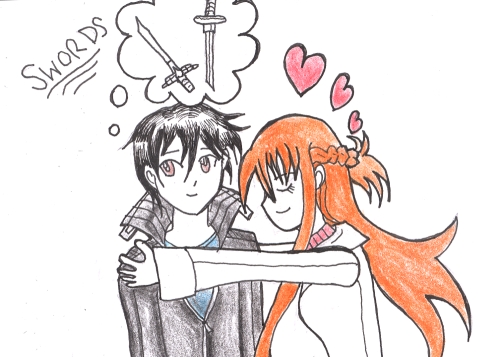 I only have a few thoughts on this episode so far, so I figured I’d just dash them off in devil-may-care note format. A rebel is me!

–Apparently there’s been much criticism of Asuna’s thought(!) that she wants to stay with Kirito while he discusses his dream of becoming an MMO developer. I guess the logic is that Asuna should have her own dream distinct from Kirito, otherwise the show is being sexist by depicting her as less ambitious than him, or less of a person.

Sounds logical except…some people are natural caretakers (and Asuna’s choice to play a support class within ALO is consistent with that). Some women do aspire to be wives and/or mothers, and it’s not a bad thing. The problem with the caretaker role for women is that it’s too often been forced on us to the exclusion of all other options, not that it’s bad in and of itself.  I wonder if some of these critics realize how insulting it is to assert that a female character who “just” wants a family is deficient as a character and/or woman. Often in trying to prove that a given work is sexist, the nature of the complaint belies a different kind of sexism. Swapping one sexism for another doesn’t win points in my book.

In other words: Stop ambition-shaming Asuna, she can kick your ass. She may not always feel the need to kick ass, because she’s secure like that, but she can totally do it.

–The one real surprise for me in this episode was Kirito’s repeated denials that being shot in a videogame could kill a player. I would think, of all people, Kirito would be open to the possibility of the overlap between the digital and the physical being far greater than previously believed. Kirito saw Asuna resist paralysis, which should have been impossible in the SAO engine, because she basically willed it away; he then used the same kind of willpower to take action after the game had declared his avatar dead. He knows that the brain can have an extremely powerful effect on supposedly immutable game mechanics, so is it really such a shock to think that the reverse could be true as well? It seems like he’s just in denial.

It would be interesting to see Kirito humbled as he learns that even he doesn’t really understand just how this new world of VR interfacing with the physical body works, but I doubt that’ll happen. Right now, I’m assuming there’s a non-virtual reason why Death Gun is able to kill people in-game (presumably because he has access to his victim’s bodies specifically), but I kind of hope I’m wrong.

Uh seriously, it may be more difficult to maintain interest in this particular virtual world since it’s all so depressing-looking, as opposed to the lush environs of SAO and ALO. A lot depends on what new character Sinon brings to the table, so I hope she ends up being more interesting than “Sniper lady with nice butt.” I haven’t read any of the novels beyond the very first (recently released by Yen Press), but the character seems to have a lot of fans, so I’m cautiously optimistic.

-I like Kirito being cast as a kind of virtual-reality special agent for the government. He’s qualified for the job, and it’s smart that the authorities have realized that they need an on-the-ground presence in these games, rather than futilely trying to ban them. Of course, this lends itself to song:

Who you gonna call?

Sing it out loud just once; I promise you will never hear the Ghostbusters theme the same way ever again. You’re welcome:)