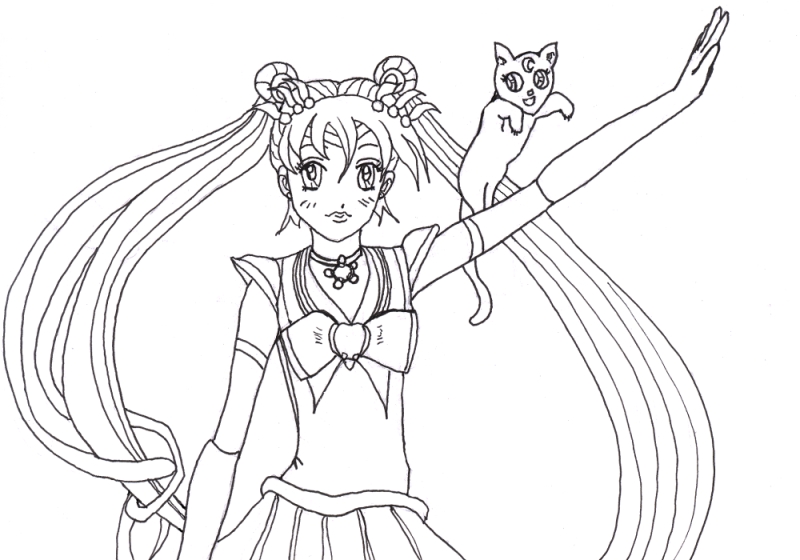 Watching the first episode of the new Sailor Moon, I wonder if it’s possible to have too much reverence for the source material. As promised, Crystal is sticking much closer to Naoko Takeuchi’s manga than the original anime, but as I watched this episode, I found myself wondering if that’s really a good thing.In anime/manga fandom, we tend to assume that the closer an anime adaptation is to the original creator’s vision, the better; hence all the complaining when an anime dares to significantly differ from the manga it’s based on. Now, I do like Takeuchi’s original work (which I only just recently read in its entirety). But I get the impression from Crystal that the staff is working so hard to stay true to Takeuchi’s vision that the anime doesn’t have space to breathe, and it results in a somewhat stilted experience.

For example, the character designs look a lot more like Takeuchi’s hopelessly slim, leggy heroines; the girls from the ’90s anime look practically chubby in comparison. However, the chubby/cute look of the old designs, plus the original show’s penchant for going super-deformed at the drop of a hat, worked well with Usagi’s immaturity at the beginning of the series. Sure, she’s always been a whiner and a crybaby, but when she frequently looked like an adorable little toddler, you could never really hate her for it. The new Usagi looks like a runway model, which makes her extreme childishness much less endearing.

This is getting ahead of myself, but the question of the creator’s vision in regard to the original Sailor Moon anime has always been a bit muddled anyway; in at least one instance, Takeuchi’s editors at Nakayoshi magazine vetoed a plot development that the anime was nevertheless allowed to go forward with. As a result, the end of the Queen Metallia arc in the anime is closer to what Takeuchi intended than the manga storyline she actually drew. That means that if Crystal continues to stick closely to the manga, at one point the show will be less true to Takeuchi’s vision for the story than the original anime was– despite the fact that said anime was often reviled for taking too many liberties with the core story.

Or is the show going to take on the task of delivering the story Takeuchi wants, regardless of what the original manga did? That would be very interesting, although possibly quite confusing for old-school SM fans. Will we even know what’s “canonical” anymore? Is there even a point to worrying about such things when talking about a story involving space princesses and talking cats?

On a different note, I think they should have recast Usagi’s voice actor….

Now, don’t get me wrong, Mitsuishi Kotono is great. She’s given some all-time great anime performances. However, it sounds to me like playing a young teen doesn’t come naturally to her anymore (perfectly understandable) and she’s trying to bump up the cuteness level to 100% to compensate for that. I know some viewers are impressed by how close Kotono’s “Usagi voice” is to what she recorded over 20 years ago, but to me, it sounds like there’s a notable strain on her voice, and it’s distracting.

I’m also torn on the artwork in general. I’m not as put off by the obvious use of CG in the transformation sequence as some fans seem to be, but I don’t think it looks that great either. By this point in time, I feel like the animation in Sailor Moon’s transformation sequence should completely blow away the 1992 original, and while it’s certainly more detailed, I don’t get that feeling; it’s just not all that exciting.

All of the above absolutely falls into the category of “hardcore fan nitpicking,” with everything that entails. I don’t think the show is bad, and so long as some viewers enjoy it, so much the better. After all, its not like the existence of Crystal takes away from the original anime in any way; it’s just another interpretation. All I’m saying is, as someone with the questionable lack of sense necessary to label themselves a “Moonie,” I’m not that keen on it so far.

However, we haven’t really seen Minako yet (brief Sailor V cameos don’t count!), and when my favorite senshi is on screen again, I reserve the right to throw all logical thought out the window. Next week is supposed to introduce Ami, so the question on everyone’s mind is whether or not the cram school sequence will again feature CD-Roms, setting this show as firmly in the ’90s as its predecessor. I can only hope they’ll double down and show floppy disks instead…I mean, that would be hilarious, right? It’s not just me?