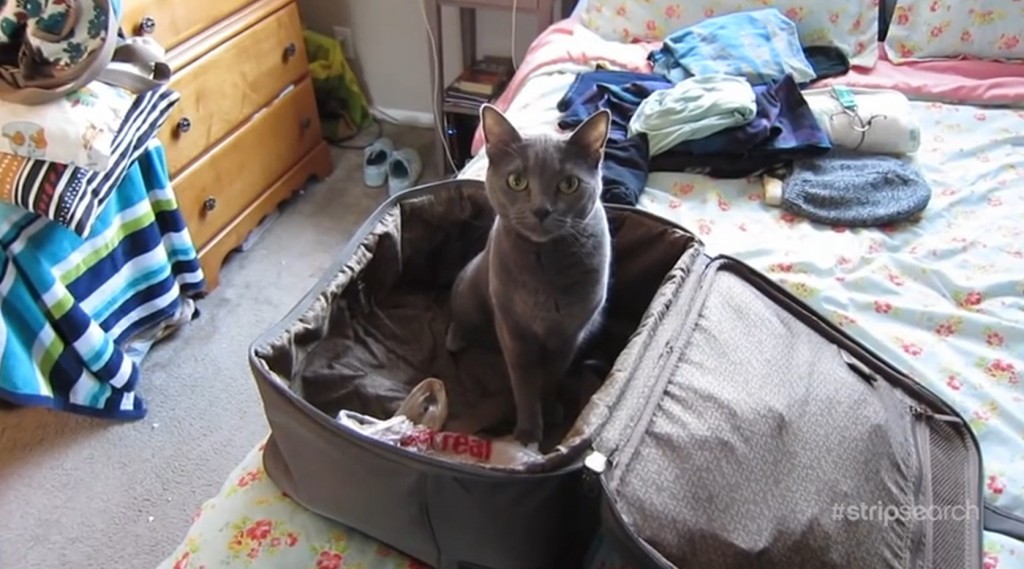 Katie’s cat is ready for the upcoming War of the Webcomics. ARE YOU?

This episode of Strip Search is nuts, y’all. I was expecting another social challenge, like maybe they would have to play Scrabble really aggressively or something, then Mike and Jerry are suddenly in the house (WHAT?), there’s a two-month time skip (WHAT?), there are cats everywhere and people are producing mountains and mountains of art like it’s just pouring out of their faces. This is like the Red Wedding episode of Strip Search, except instead of getting married people are drawing comics and instead of getting murdered they are getting even more internet-famous.

Does that metaphor work? No? Sorry, I don’t watch Game of Thrones, I’m just trying to keep up with the zeitgeist and whatnot. 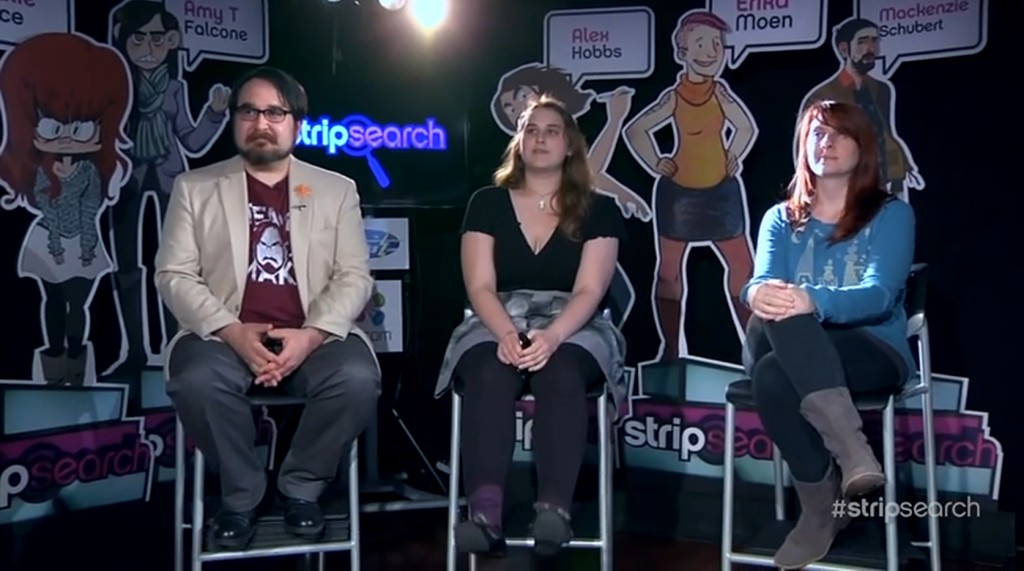 Afternoon, Happy Artists Commune of Quiet Satisfaction. Katie and Abby are commiserating about their Strip Search experience like a pair of grizzled war veterans. Abby confesses that she hopes Lexxy comes back because she feels like she could take Lexxy in a comic battle (and she’s not wrong), while Katie confides that Maki was the first person to be really welcoming to her after the back-to-back elimination gauntlet. It’s interesting; at the time, when Katie was being put up for elimination twice, I thought “that’s just how these contests are,” but now that I feel like I’ve gotten to know Katie a bit, the very thought of how hard that must have been for her is sobering.

Maki comes back to hugs and commiseration, then Graham congratulates the final three for making it this far. In a surprise move, Mike and Jerry then make an appearance to explain the final challenge, and I guess it’s like that one episode of Top Chef where Padma came in to wake everyone up and the chefs were all like “OMG, PADMA IS IN THE HOUSE.” They must have followed Maki directly from the studio; I like to think they were in the car directly behind him and had to lie down in the back seat to keep it stealthy.

For the final challenge, the contestants will have two months to create an original comic strip, including:

Strip Search Home Edition just blew up like a supernova. I guess I’ll get to that later.

The Strippers react to the news: Maki is overwhelmed, Abby is irritated that she can’t just win the competition right then and there, and Katie is bouncing off the walls with joy. Katie is absolutely radiant this entire episode; it’s like all the stress from the competition melts away and you can see this beautiful drive to create emanating from her. It’s interesting how this twist changes the competition. With her quick pen and quicker humor, Abby was looking unbeatable in the stressful elimination format, but giving everyone time to put out their best work evens the playing field. Now instead of being Abby’s to lose, it really feels like anybody’s game. I think this was a good choice– being able to come up with a funny comic strip under the gun is an impressive skill, but it’s not really a skill that matters that much outside of the specific context of this competition. Being able to create good stuff on your own time seems much more indicative of what creating a webcomic is really like.

Next is a really cool comics-creating montage, where we get a peek inside everybody’s sketchbooks back home, watch them draw and get a glimpse into their creative process. It’s only a minute or two for each artist, but I could have easily watched about three hours of this, because it’s all so artistic and interesting. As has become the mantra of Strip Search watchers, “Maybe it will be on the DVD.”

For some reason, we see a lot more of Maki’s comic than the others; his is called “Sufficiently Remarkable,” and looks to be a gag/situation comic about two women, their friends, and some talking animals. I don’t really like the name Sufficiently Remarkable, but I don’t really like the name “Something Positive” either, and that seems to have turned out okay. His art looks really polished, but I can’t really tell what the premise of his comic is, aside from the fact that it’s about a redhead who apparently likes to drink a lot of booze. Speaking of Something Positive, based on the little we see SR kind of reminds me of that, only Maki’s art is way better.

We see Abby’s Montreal apartment, where she has the same kind of drawing board that I do(!) only hers isn’t covered with junk so she can actually use it. Her comic appears to be a sci-fi/horror sort of deal, although we don’t see any finished strips and we don’t get the title yet. I’m wondering if she did anything in color; everything we see is b&w, and it’ll be interesting to see if that factors into the Creators decision at all. So far, it looks like Abby is taking her humor and using it to present a genre comic, which seems like a wise move. She’s already got the situational-gag-comic thing going on with Junior Scientist Power Hour, branching out into a different kind of comic is smart.

Katie’s Burbank, Ca. house/apartment whatever is freakin’ gorgeous, and I am ever so slightly jealous of her. We actually see the least of her work, only getting a glimpse into her sketchbook and no actual comics or finished illustrations. All we know is that she’s trying to emulate the style she uses in pen and ink in a digital format, and it’s been a challenge. She also confides that she tends to draw on lined paper because it’s “less intimidating,” and I nearly dropped my coffee mug when she said that because that is SO TRUE and I’ve never heard anyone else say that before. For me I think it’s that sketchbooks are more expensive than regular notebooks so there’s this subconscious expectation that you have to earn every page you use in it, make it worth the investment, and it’s a lot of pressure. Instead of just drawing, on some level you’re always asking yourself “is this sketchbook-worthy?”, and it’s a pain. With lined paper it’s like, may as well fill it with silly doodles because what the hell else are you going to do with it? Long division?

Everybody reconvenes in Seattle and it seems like no matter what the judges say at this point, everybody’s going to continue with their comics going forward. There’s a little pause as half the internet makes a mental note to read the shit out of those comics, and we await the presentations for Mike and Jerry. I don’t think I could possibly be more psyched about the next episode, so Bravo, Strip Search. Mission accomplished.

So, What About Strip Search Home Edition?

I think a lot of the folks who have been playing along at home with the elimination challenges are going to come up with a webcomic pitch, and I’m debating whether or not I should do it as well. I want to, but I’m almost afraid to start creating a comic, fall in love with it and then not be able to keep it up. But I think completing the assignment may have a lot of value regardless of whether or not you end up doing your comic “for real.” I know I’ve learned a lot from doing the elimination challenges, and I started doing them basically on a whim. The prospect of taking it to the next level is exciting, invigorating.

I pretty much have to do this, don’t I? I mean, it would be almost stupid not to, right? Damn. I’m committed.

So, I don’t know about you guys, but I’m going to be creating a comic pitch featuring a name (one would hope), 3 character bios, 6 strips, and a T-shirt design, to be posted on this blog this summer. Whether this comic will be something I’ll want to continue going forward, or something I’ll even be able to continue going forward, I have no idea, but obviously I’ll never know if I don’t try.

I have a question though: has somebody made a forum or a web community for people participating in the challenge to share drawings and ideas? It seems like a pretty natural thing to do, but I’m not aware of anything that’s been started yet, and I don’t know if I want to be the one to start it. If something like that exist, please let me know in the comments, okay? I want to make more friends who also draw pictures; maybe this is a great opportunity for all of us.