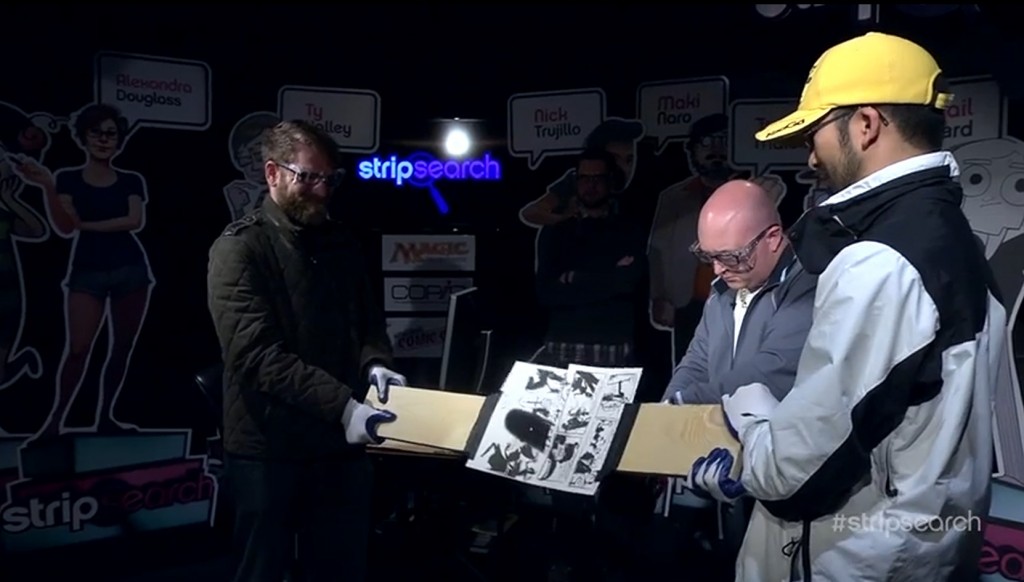 It was with no small amount of trepidation that Penny Arcade announced their latest Kickstarter: raising money to help confused lumberjack art critics get the counseling they desperately need.

For Elimination #9, the artists get a tough set of topics and both kind of choke a little; fortunately, one of them chokes a little less than the other. More importantly, we learn that Lexxy is a total pro, Maki is as sexy as a walking pineapple man can be, and there is at least one joke that even Mike finds inappropriate; a good time was had by all.

My Elimination Comic: Religion and Candy

Yeah, I know I said last time that I was going to go pencil and paper if I was doing more than three panels; I lied. I was in a tablet mood today. I still had to rush on the art because I draw too slowly and thus it’s not very polished, but unlike last time, I feel like this one is at least a complete, finished comic strip. I don’t know if I’m getting better, or if my standards are just getting lower; I’m going to choose to believe the former.

My original thought was about “Candy that makes you believe in God” and someone wondering if eating it when you already believe in God would have the opposite effect and make you an atheist. I liked the idea at first, but I couldn’t think of a single punchline that wasn’t beyond lame. I like this much better; it seemed really funny when I first thought of it, but I don’t know if the execution really pushes the joke like it should.

Playing Strip Search Home Edition has been very educational; I’ve learned that I can come up with ideas for jokes that I like pretty consistently, but I somehow lose the joke in the execution, or fail to communicate the joke particularly effectively. I find this really interesting, because despite all the comic pages I’ve drawn, I never really tried to be a gag cartoonist, so this is all new information. It’s definitely something I’m going to keep in mind in the future, whether I draw more cartoons of this nature or not. Thanks, Penny Arcade! 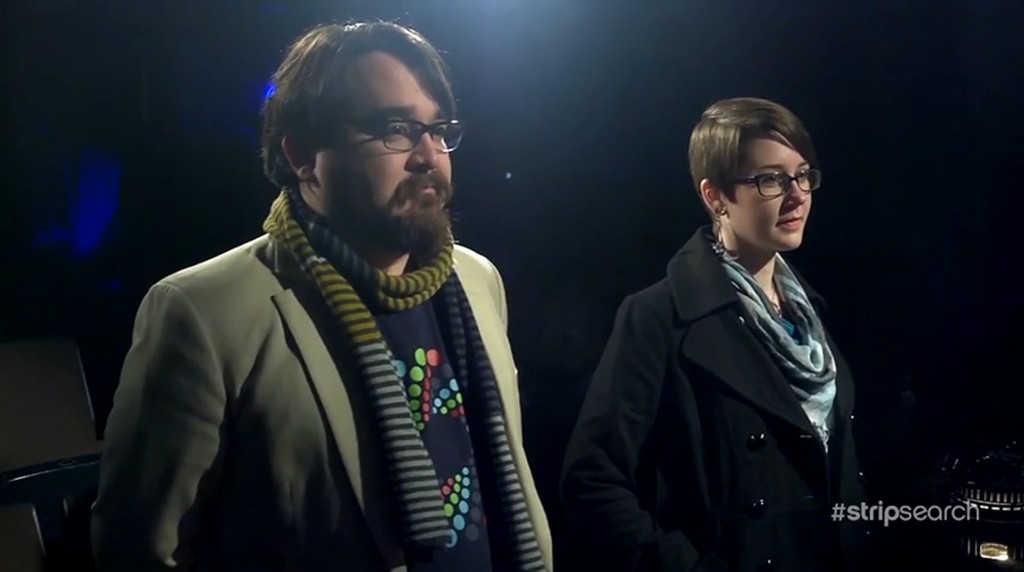 Maki and Lexxy enforcing the “All webcomic artist hopefuls must wear scarves,” rule.

Bad news, guys: progress is stalled on the Strip Search Sing-Along Theme Song that I’ve been working on. The last time I tried to sing along with the opening credits, I got as far as “Strip Search, LA LA LA LA” when my husband gave me a look like he was planning on killing me and dumping my body somewhere on the side of the interstate, so I had to abandon that project for now. I’ll have to start singing along very quietly while he’s asleep.

Anyway, Thunderdome. Lexxy and Maki arrive ready for a strip-off (you know what I mean), and Jerry gives his typical Wastebasket of Broken Dreams speech. Maybe it’s just me, but whenever he gets up to “…I hope you’ll indulge me,” I am always waiting for someone to scream “No! Move it along, baldy.”

Maki draws “Religion” and Lexxy draws “The City,” which, for some reason I can’t articulate, seems like a really terrible topic. It just seems even vaguer than most of these topics are. Fortunately, Maki doesn’t like “The City” either and cashes in his Redraw Ticket to replace it with “Candy,” a much better topic. Still, the combination of Religion and Candy is a bit tough, and we see both artists struggle with it a little.

In theory, it’s a good combination because there’s a lot you can do; plus, there’s the fact that religion can often be hyper-serious whereas we associate candy with being fun and childish, so there’s a good contrast there that can be used for comic effect. However, given the potentially sensitive nature of the religion topic, it’s the kind of joke you want to give some thought to in order to make sure you hit just the right note of absurd and funny without being mean-spirited, and obviously, the 90-minute format is at odds with that.

Mike asks Lexxy why, if she loves comics so much, she hasn’t started drawing any of her comic strip ideas yet, which is something I was kind of wondering myself. Lexxy replies that she doesn’t have time, what with her full-time job as an illustrator and all. They then discuss the difference between being a full-time creative person trying to do comics versus someone with a non-creative job, which is an interesting distinction; basically, it’s easier to do something creative in your spare time when your main job is thoroughly non-creative. It’s been my experience that this is true; it was much easier to draw comics while I was working as a bookseller at Barnes and Noble then when I basically started writing for a living. In fact, I stopped drawing comics pretty soon after my day job became creative in nature.

During the inter-drawing banter, Jerry comments that having to pick between Lexxy and Tavis way back in Elimination #3 was like “Sophie’s Choice,” and either doesn’t know, or pretends not to know (more likely) what Sophie’s Choice actually refers to, then is appropriately horrified when Mike fills him in. This is noteworthy for two reasons: 1) we have found exactly one subject so far that Mike doesn’t think is appropriate for joking purposes and 2) I swear two people had this EXACT SAME conversation on an episode of the now-defunct videogame podcast Retroforce Go! At one point host Chad Concelmo said “Hmm picking between these two is like Sophie’s Choice,” then someone informed him what Sophie’s choice actually referred to and you could hear his brain Blue Screen for a few seconds there. It’s was a great podcast, if you’re not familiar with it.

Both artists finish their strips, neither seeming particularly thrilled about them. Mike and Jerry aren’t pleased with either, but do note that Maki took their advice from last time and has learned not to overcomplicate his strips with unnecessary words. Lexxy has done some of her classy-looking sketch art, which is nice to look at and all, but the whole thing seems to be missing a joke, or any reason for being that isn’t a joke. Some viewers continue to take issue with the fact that Mike and Jerry seem to be prioritizing humor above all else in this competition when some of their own strips don’t rely on humor, but how many directions can a one-off comic really go in?

Sure, they do comics like that one very tender one where Gabe looks at his son sleeping and says “Don’t grow up,” but that takes place in the context of people watching his son basically grow up on-panel for YEARS, and also in the even greater context of watching Gabe change from a self-centered asshole to a caring father over the course of 15 years. You can’t do a comic with that kind of resonance as a one-off, and it seems only natural to me that the judges are expecting a joke comic in a venue where a joke comic happens to work the best.

Obviously this all comes down to personal taste, but if anyone threatened to succeed with a comic that deliberately wasn’t funny, it was Monica. Lexxy’s candy templars seemed like a germ of an idea that hadn’t been developed yet– which is totally understandable under the circumstances, but that’s why a simple, clean strip from Maki won out.

To her credit, Lexxy takes her defeat with the utmost grace and finally gets to see a proper comic destruction; the guys held off on destroying her original elimination strip, and they declined to destroy Monica’s in front of her, so Lexxy has yet to see a proper strip destruction until now. And it’s a doozy; cutting up the comic with a chainsaw is inspired.

And so we say goodbye to Lexxy as a competitor. I’ve commented on hate for Lexxy in the past, which I’ve always found bizarre; sure, she’s said one or two things that rubbed me the wrong way in episodes past (and I’ve pointed that out) but she still comes off as a pretty nice person and one helluva pro at the drawing board; she didn’t lose this competition so much as find an alternate way to win, as her success on Kickstarter proves.

Next Time: Presumably the Top Three will spend the next day beginning the planning stages for their graphic novel team-up, “Psychic Pineapple Tangents,” which sounds like something Antarctic Press would absolutely publish.