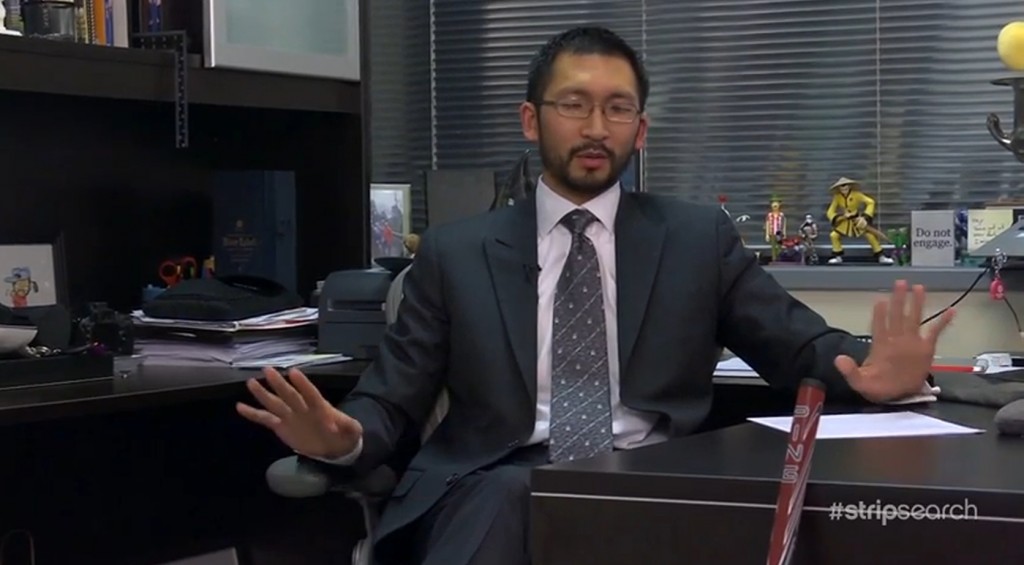 This episode was about as interesting as an episode about contract negotiation could be…which usually would be followed by a comment like “Which, sadly, wasn’t very interesting,” but it actually was fairly interesting. That said, I feel like recapping stuff about “licensee and licensor” about as much as I feel like cleaning the bathroom, so it’s a pretty shallow recap this time. 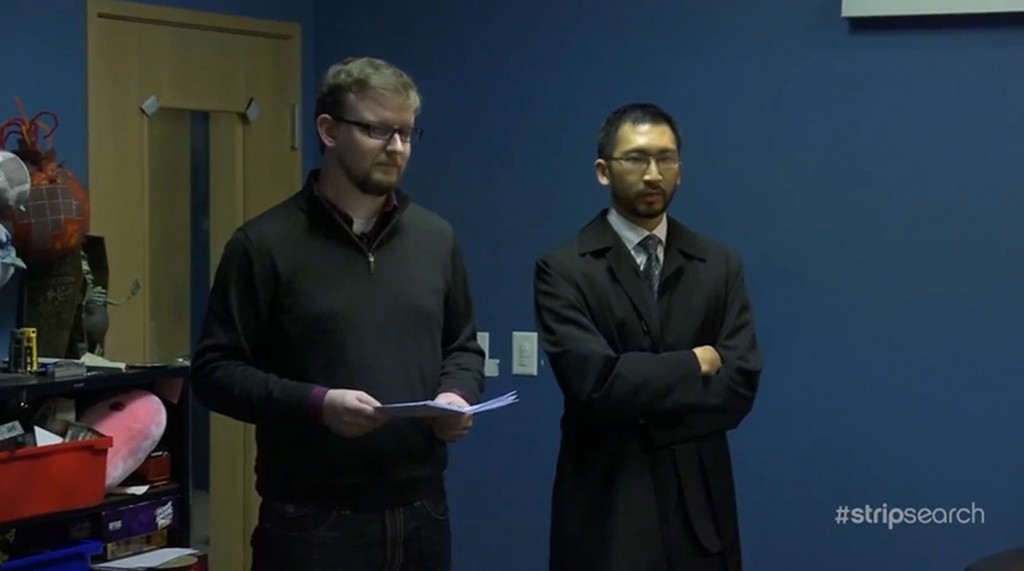 Afternoon, Penny Arcade Headquarters. Graham lets the artists know that they will be spending the episode going through a contract, “and it’s not a very nice contract.” No, it isn’t, but I feel like this challenge might have been more interesting if Graham hadn’t basically told the artists outright that the contract was going to try to screw them in every way possible before they even saw the document. That, combined with telling the story of Mike and Jerry accidentally signing over all the rights to their comics due to a misleading contract, primed the artists to be hyper-vigilant from the beginning. If they hadn’t been warned so thoroughly beforehand, we might have seen a wider variation in interpretations of the contract; then again, if this whole thing was meant for educational purposes, which is pretty likely, it was more about driving home the point that “contracts can screw you” than making the best possible television.

Naturally, Khoo is the contract negotiator, which led me to believe we would be seeing Serious Hardcore Business Robert (TM Lexxy), the business guru who protects Penny Arcade’s sundry financial interests like a mother bear watches over her cubs, and will not hesitate to cut a bitch. Fortunately for the contestants, Serious Hardcore Business Robert would never stand behind a contract this terrible, so the Strippers must deal with Mock-Terrible Businessman Khoo, who is much less intimidating. The set-up is that Khoo is trying to secure the rights to their artwork to use on a line of lunchboxes, although he also may be trying to secure the rights to use them as his personal piggy banks for the rest of their natural lives; it’s that kind of contract.

Maki is up first and wisely asks for the opportunity to go over the contract with his lawyer, which is what one would actually do in this situation. However, if he did that, then there would be no episode, so we’re going to pretend the whole lawyer-option doesn’t exist. Maki seems to find all of the gotchas in the contract, but he seems kind of incredulous that this whole scenario is even coming to pass. Maybe Khoo dinged him a few points for not taking it seriously enough?

Next up is Lexxy, who is Stone Cold Business Lexxy during this challenge. She’s so specific that when Khoo asks if he has the right to make forks to go with the licensed lunchboxes, she says that utensils are okay, “but only forks, spoons and knives.” I am dying to know what other utensils she wants to keep her options open for. It boggles the mind.

Abby finds all the evil small print in the contract and sasses Khoo in proper Abby fashion, and honestly, it doesn’t really matter what Abby does at this point; it has reached the point where crazed Abby fanboys and fangirls jump up and clap whenever she is on screen. Khoo wisely just gets out of the way of the Abby Sass Express; I don’t doubt that Serious Hardcore Business Robert would be a match for Abby, but that’s not an episode of television that anyone particularly wants to watch.

Katie starts out a little timid, but soon becomes super-firm whenever her creative rights are concerned. She brings up all the same points as everyone else, except for some reason, Khoo decides to bring up the story about his biggest competitor, Khoo’s Lunchboxes, run by his brother (“he got into the business first,”), so Katie’s segment is the best. I feel like the story of a war between two brothers, competing against each other to “move that tin,” in the insanely competitive, cutthroat lunchbox industry, could make for a great webcomic.

Negotiations over, Khoo discloses that the contract really is about as horrible as they all thought it was, and he was impressed that they all caught as many of the gotchas as they did; see my earlier point about them being warned 47 times before they started, but enough beating on that dead horse. He declares Katie the winner, but it’s unclear why exactly she won, and he doesn’t elaborate; we can just say that Katie wins because it is Katie’s God-given right to win everything, but seriously, it would have been nice to know why she won. We didn’t see her catch anything that the other Strippers didn’t, but that could have been the fault of the edit. Anyway, she sends Lexxy and Maki to the Thunderdome, because it would be mean to send Abby two nights in a row; she doesn’t say that in so many words, but that’s the gist of it.

However, the Thunderdome will not be held that evening, because Abby and Katie have to attend the special dinner with Mike, Jerry and Robert that they won earlier in the day. I was surprised we even got to see this, because I kind of assumed that the five of them were just going to go out to The Cheesecake Factory privately or something, because I forgot this was a reality show and everything needs to be filmed. However, after seeing it, I kind of wish it hadn’t been filmed; it seemed kind of awkward and it was probably because of the constraints of filming. It wasn’t painful to watch or anything, but it seemed like they might have had a better time and a better conversation without the cameras there. I guess you know you’ve grown rather attached to the contestants on a reality show when you start wishing that things would STOP being filmed for their personal benefit.

Next Time: After Maki’s brilliant Mermaids +ukulele comic, he is my pick to emerge from the Thunderdome and into the final three, but you can’t count Lexxy out; her style really seems to really resonate with Mike and Jerry, so if Maki doesn’t knock it out of the park again, she could definitely take it. I’m still rooting for Maki though, because I am a self-hating woman who hates other women, or maybe just because I like Maki slightly better; either or.