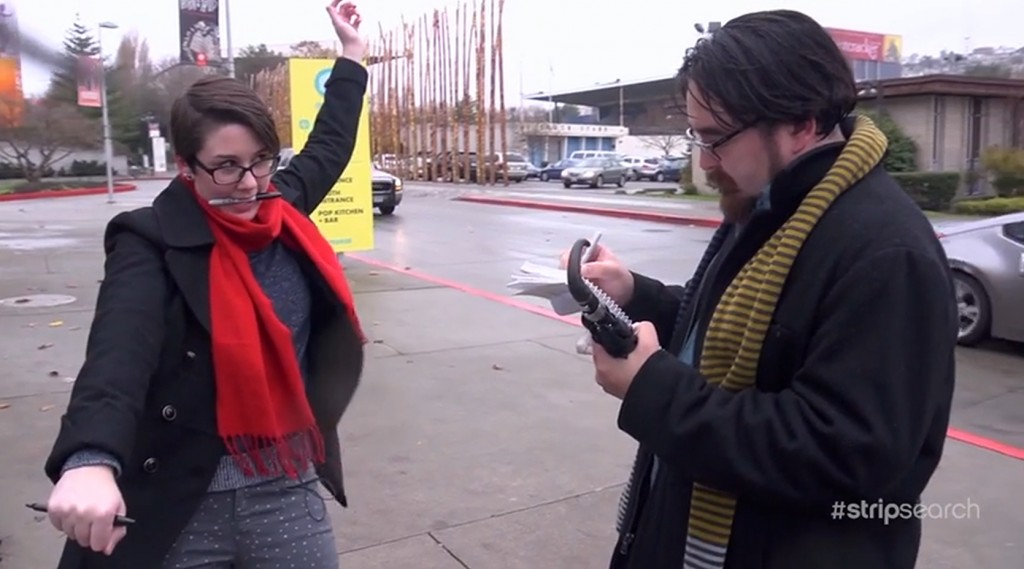 Somewhere on the Internet, a hilarious .gif is being made. “.gif” can be pronounced in one of two ways, have you heard?

In a downtown Seattle scavenger hunt that showcases the area’s beautiful weather (snort), Lexxy and Maki try to be all organized and end up going on a wild goose chase that costs them mucho time and points. Katie and Abby pretty much just bumble around and hit all the landmarks partially by chance, because they are gorgeous fae creatures who run on pure chaos magic. In Lexxy and Maki’s defense, they are hilarious together. 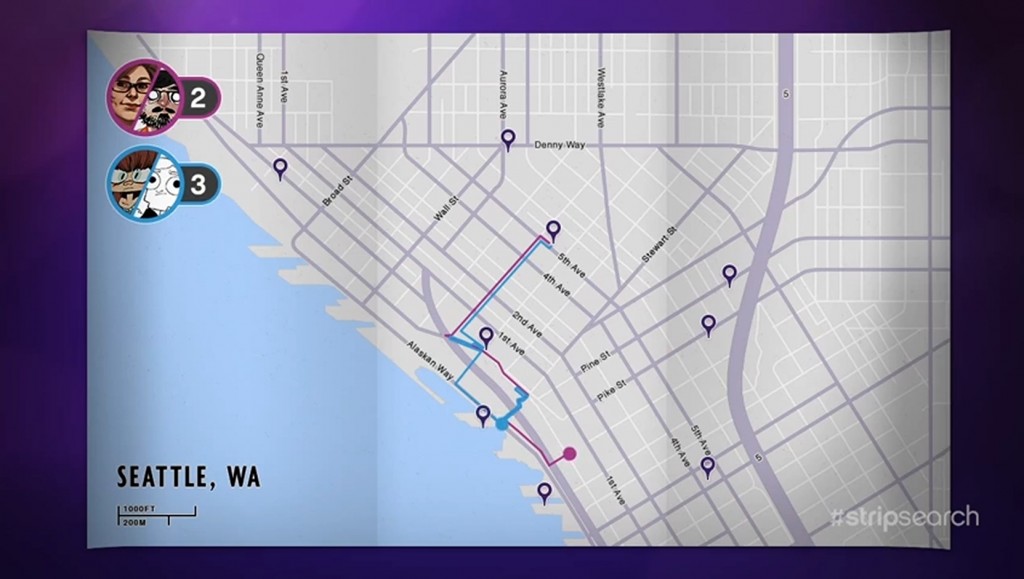 Morning, Happy Artists Commune of Lady Cartoonists And One Dude. Graham greets the artist and lets them know that they’re going for a ride. It looks like Seattle is covered in one of those all-day misty rains, which is less than idea for an outdoor activity, but at least it’s not pouring. I wonder if they would have still done this challenge in the pouring rain– it wouldn’t have been impossible, but it would have been a real challenge to keep the sketchbooks from getting soaked.

They arrive at Top Pot Doughnuts, which looks like an awesome place to hang out. I seriously felt like packing up and moving to Seattle so I could curl up there and draw for several hours on a daily basis. Sketching at the old-fashioned doughnut shop, sipping a delicious cafe mocha, the sound of a gentle rain providing a soothing tap-tap-tap beat in the background, listening to the spirited conversations of Seattle denizens young and old wafting in and out over the intoxicating aroma of freshly-brewed…oh right, Strip Search. Maki speculates that it might be a doughnut eating contest, which is a fair guess because this show would totally do that, but oh, Maki. I am so sorry. So, so sorry. 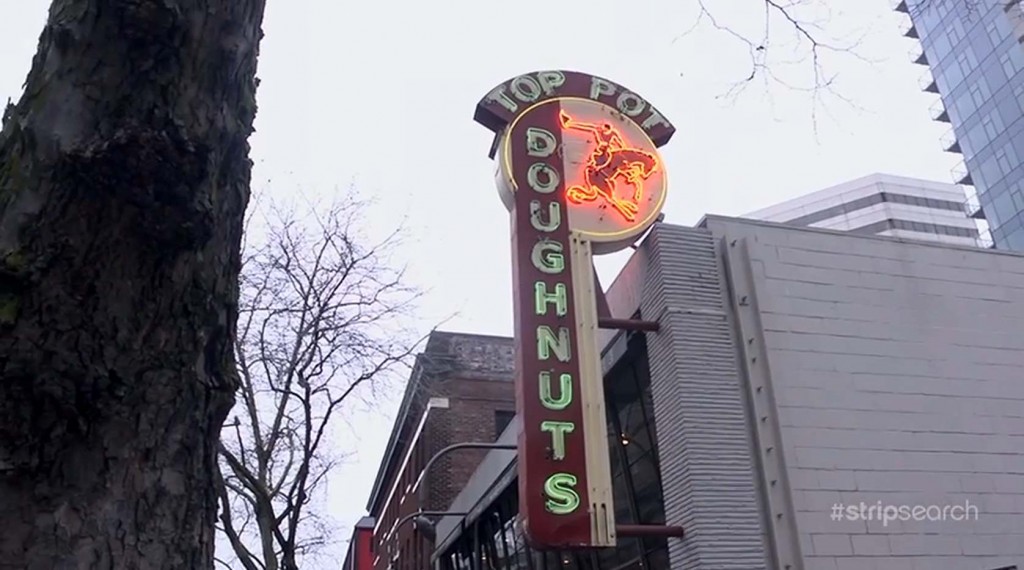 Top Pot Doughnuts: I WANT INSIDE OF YOU. GIVE ME ALL YOUR COFFEES.

“We’re back downtown, but there’s no Ducks today,” says Graham, referring to the previous Seattle flavor challenge. LIES! You can clearly see a Ducks car/boat pass behind Lexxy about halfway through the video. Graham is pulling funny business for this entire vid and I’m not sure I like it. The artists have to go on a scavenger hunt and draw Seattle landmarks, which is a nice way to put some art into it after a string of non-art based challenges. Well, mostly non-art based challenges; you could make the argument that the “Copy Obama’s signature!” challenge was art-based, but I don’t like that way of thinking. People who argue that are probably the same people who argue that putting ketchup on a poor kid’s sandwich counts as a vegetable.

You know, normally the fact that Strip Search is a pretty low-budget show is irrelevant; for the kinds of challenges they do, you don’t need a lot of money. When the camera is basically peeking over someone’s shoulder while they draw a picture, production values don’t count for much. However, this is one of the rare instances where I think you can see constraints holding the show back, because while this is a fun challenge to do now, it would have been epic earlier in the season, but probably unaffordable. Can you imagine 12 artists hoofing it all over the city in teams, racing to be the first to draw the Happy Elephant Carwash or whatever the hell it was? It would have been just like The Amazing Race, only with people you don’t hate. I can only imagine they didn’t do that because it would have been a logistical nightmare to film, requiring at least six cameras/ camerapeople, and it just wasn’t feasible for the production team. I hope the show does well enough that something like that is an option for next season.

Katie confessionals that she’s happy to be paired with Abby, since Abby has a sense of direction and is “low-maintenance.” Clearly, Katie doesn’t know about Abby’s need for a man harem and dozens of cats to serve her, which is surprising considering Katie’s patented ability to know everything all of the time. Maki is happy he’s paired with Lexxy because she’s already been to Seattle; am I obligated to make a Great Lexxy Conspiracy joke, or are we all over that by now? We are, right? 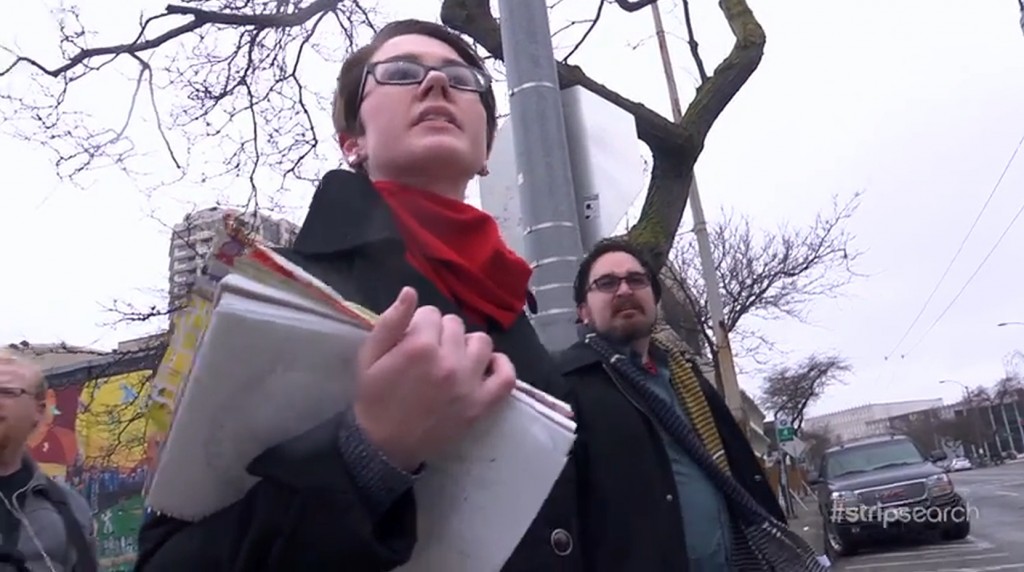 Lexxy: For when your reality show has no villain whatsoever and peeps just need someone they can pretend to love to hate, accept no substitutes.

Lexxy and Maki make the mistake of starting to plan while walking, and miss the fact that Top Pot Doughnuts is actually one of the locations listed (in clue-format) on their list. In general, Lexxy seems to be trying too hard to cover ground and ends up missing the forest for the trees, dragging Maki with her. I’d probably be doing the same thing in her position; scavenger hunts freak me out. Still, it’s pretty obvious from the beginning that Katie and Abby’s more relaxed pace is going to win the day, despite a few voice-overs from Graham that try to make us think that Lexxy and Maki are in the lead. Nice try, Graham.

Lexxy and Maki walk right by the “busted-up Umbrella,” which is a sculpture randomly plunked in the middle of downtown Seattle for no apparent reason, while Katie and Abby find it by chance, because that’s just how they roll. I’m pretty sure no one ever finds the “giant typewriter-eraser,” because I just realized I have no idea what that is, and I’ve watched this episode twice. Maki makes a “Great, send the fat guy running around,” joke, then does a really adorable dance that makes me want to visit his webcomic and buy all of his merchandise, because look at how the man dances! Unfortunately, he and Lexxy then head off to the north, and end up wasting a lot of time without adding any locations to their sketchbook. Technically, they do add one, but they misinterpreted a clue and drew the wrong location, so they don’t get any points for it.

Meanwhile, Katie and Lexxy tackle the library, which is a really cool looking ultramodern building made of all glass. If this episode is trying to make me pack up and move to Seattle, it’s doing a good job, because that is one bitchin’-looking library. Realizing they have problems, Lexxy and Maki decide to add the Top Pot Doughnuts location to the sketchbook from memory, leading to Lexxy trying to pantomime what the guy pictured on the sign is doing while talking around a Sharpie marker in her mouth, leading to hilarity. This marks two (2) dances completed by Team Lexxy/Maki during the challenge. They also try to fake a drawing of the giant typewriter-eraser, and seriously, what the fuck is that?

Incidentally, it must not be that bad in practice because the artists always manage to pull it out somehow, but it always sounds like gibberish to me when one person has to tell another what to draw on this show. “Okay, so there’s this long thing next to this short, round thing. And then, it fans out at the bottom, and also at the top. And the guy is doing this *insert bizarre tribal dance.* Also, there’s a cylinder, but it becomes more of a trapezoid towards the bottom. A trapezoid with fluted sides. And he’s wearing a croissant-shaped hat.”

Eventually time runs out, with Lexxy and Maki nabbing the Elephant Car Wash at the last possible second. Lexxy reveals that she still has a lot of “juice” left in her, so if this had been a two-hour scavenger hunt, she’d still be going strong. I don’t doubt that’s true; based on watching Lexxy zip around like an indestructible illustrating demon in this episode, I would not bet against her and her juice. When they return to the urban doughnut shop of my dreams, Graham is standing there eating through a box of doughnuts, claiming he has spent the past hour “filling himself with cream.” Apparently this is some kind of Loading Ready Run in-joke, but I think it’s funnier if Graham just randomly said that for no reason, so that’s what happened in my Strip Search headcanon.

Katie and Abby win with 6 locations to Lexxy and Maki’s 4, and they win a dinner with Mike, Jerry and Robert Khoo. I hope for everyone’s sake that was never filmed, because that sounds like an accident just waiting for a place (in beautiful downtown Seattle) to happen. Katie is excited, while Abby expresses fear that she “won’t have anything to say.” I think we can file that under Least Justifiable Fears In The World.

Next Time: The Strippers go through Contract Boot Camp, meaning they have to navigate through annoying legal contracts, or something like that. I imagine Robert Khoo rubbing his hands together with glee at the very thought of this challenge and everyone else at PA being like “nah, too businessy,” then Khoo says, “Either we do my business savvy challenge OR THERE’S NO SHOW,” then everyone else is like, “Dammit, Khoo,” then Mike is like “Dicks!”, because Penny Arcade.

2 thoughts on “Strip Search #26: The Lexxy and Maki Comedy Hour”