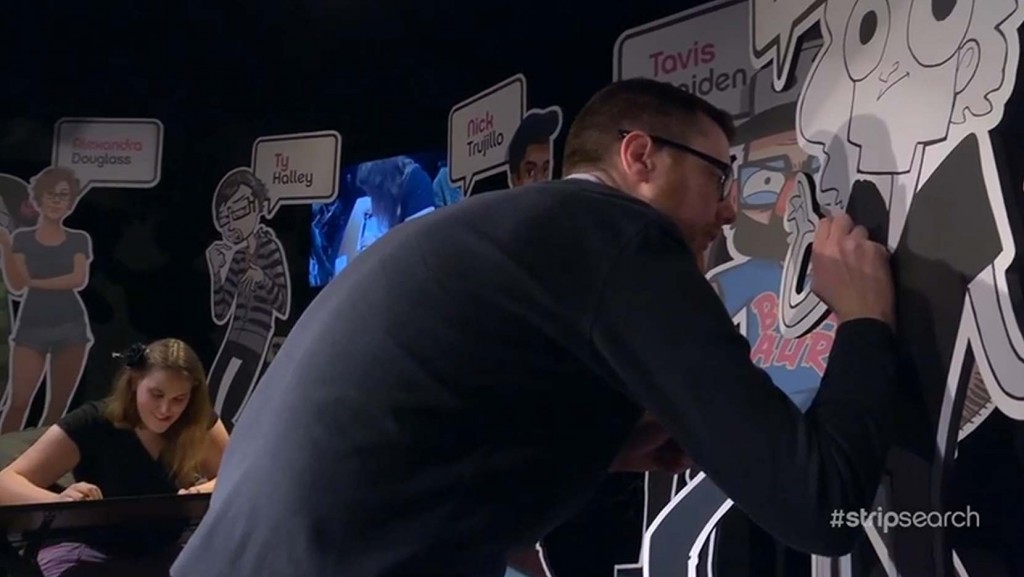 How did this elimination go down this way? I mean, out of all the possible topics in all the possible Wastebaskets of Broken Dreams, how did Abby manage to pull “Cats” as her topic? She couldn’t have been any more in her comfort zone if she were receiving a foot massage at the drawing desk while a half-dozen semi-nude Hugh Jackman clones dropped Raisonets into her mouth while she drew. What were the chances of her getting the best topic for her right off the bat, without even needing the Redraw Ticket?

Guys, I’m afraid I’m going to have to call it: This is The Great Abby Conspiracy. She must have known just where the cat-paper was in the basket before she even got to the studio. Before the competition even began. Perhaps, she knew even before she was born— which, since she’s a college kid, was only like five minutes ago anyway.

My Elimination Comic: Cats and Cars 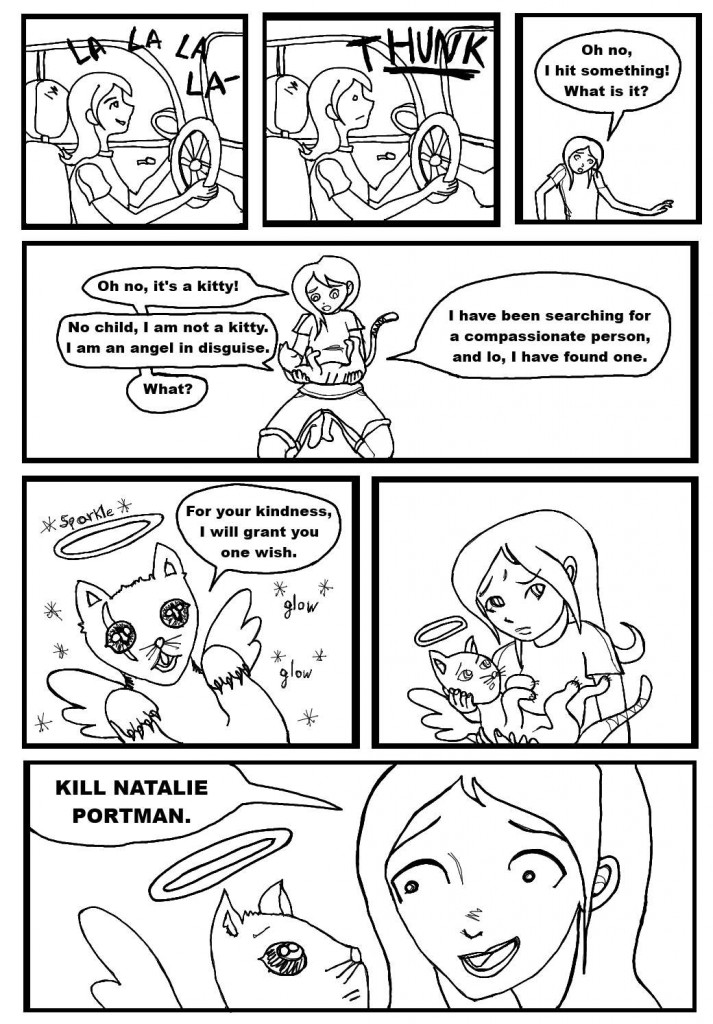 I did this in Paint.net because I wanted to try it digital again, and GIMP is evil and of the devil. Maybe not the best idea.

Yeah, so, I kind of messed this up. I didn’t want to draw it by hand again because drawing all of the panel borders with a ruler would have eaten up a large chunk of the time, but using graph paper (like I did last time) makes the resulting strip look unfinished to me. So I fired up the tablet, and I just cannot handle this many panels digitally in the time allotted; I’m a lot slower with a stylus than I am with a pencil. Panel 6 looks okay, the rest of them really bug me. From now on if I have an idea that’s going to be more than say, three panels, I’m doing it on paper.

All that said, I like the idea of the cat-angel and I think this strip had potential, I just had to rush the art so much that it looks really unfinished. Also, I was kind of in a blah mood when I drew it and wasn’t able to really get into it, which really doesn’t help. I’m going to have to work hard to redeem myself for Elimination #9 Home Edition, I know I’m better than this! Well, I hope so anyway.

Back To The Show

I really feel for Tavis here: my big fear if I were a contestant would be getting the topics and pretty much drawing a blank, which is more or less what happened to him. Apparently there was more to the joke than most people realized, since the kind of car he drew being attacked by a giant cat is the symbol of a business in the Southwest that puts cute little mice decorations on their cars, but even if the judges had realized that, I don’t think it would have helped him. He was totally cognizant of it too; you could see in his face in the car that he knew he had lost when Abby was explaining the premise of her strip to him. Even when Mike did the elimination fake-out, I don’t think he was fooled for even a fraction of a second.

Being able to come up with a funny idea for a comic based on two random concepts on the fly is a unique skill, and not being able to do it all the time doesn’t mean you aren’t a great cartoonist. It’s as good a test as any Mike and Jerry could use, but the result is that they’ve created a situation where the person who’s the best at this particular skill, Abby, looks like an unstoppable powerhouse going into the final leg of the show–even though Katie has been dominating the rest of the competition. It’s an interesting situation. Right now, it doesn’t look like anyone can hold a candle to Abby on the elimination stage, but it’s possible the final eliminations will have slightly different criteria.

As if there was any doubt, this episode made it clear that Mike and Jerry are pretty much in love with the Tangential One, and I don’t mean in a romantic way: they’re both family men! I mean they love her as a cartoonist’s cartoonist, if that makes any sense. She is not about pretty pictures or lens flare or epic narratives, she is 100% about melding together words and pictures in a way optimized to make you laugh, and very few people are made that way. At this point, it’s going to be a shocking upset if she doesn’t win.

Since there’s always an internet storm-in-a-teacup after Strip Search airs, apparently the “controversy” surrounding this episode is that the judges are putting too much emphasis on the funny quotient, and not enough on the art quality. Apparently, some viewers think “Abby keeps winning, even though her art isn’t any good! It’s unfair.”

For those that think this, I have a serious question: Are you on crack? Do you regularly smoke crack? How can you afford that much crack on a slum drunk’s salary? Can’t you sell some of your crack and buy yourself decent pants?

I mean, what the hell, on what planet is Abby’s art “bad?” In what world is being able to use relatively simple drawings to effectively tell a story, in a highly evocative fashion, sub-optimal? As someone who used to draw in a really detailed style and still does from time to time, I’m trying to LEARN how to draw something more along the lines of Abby or Lexxy’s cartoon style. Just because they use a lot fewer lines than say, Rob Liefeld*, doesn’t make their art bad, or easy to do. I have to wonder if this minority of viewers who hate Abby’s art are the same people who worshipped Todd McFarlane’s Spawn back in the ’90s. “Look, he drew every single brick in the alley wall! This art is AMAZING!”

Anyway, when all is said and done we got an episode with some great (albeit even more sophomoric than usual) humor, and we said farewell to one of the classiest competitors. Power on, Tavis: you were a class act for the whole competition, which in this group is really saying something. At the risk of maybe entering too-personal territory, I wonder if he knew his baby girl was on the way at the time he was eliminated? I hope so. For some reason I can’t fathom, Stranger Danger is one of the only Strip Search webcomics I haven’t read extensively yet, but I’m going to address that ASAP; the guy draws some great stuff and deserves success.

NEXT TIME: Will the SS Tangent Steamroller claim it’s next victim, or will Lexxy and Maki go up in an epic battle of calm stylus warfare? Will Katie have to pick two people to go up for elimination AGAIN and pick herself just because she can’t take it anymore? And if Abby gets her man-harem sorted out, will Robert Khoo train them all in the ways paddle ninja moves to form an super-invincible table tennis gigolo army? All that and more, possibly, on Strip Search.

*By the way, I’m using him as an example of overly-detailed art here, but I think people should really lay off the Liefeld hate on the internet sometimes. Dude’s cool with me.