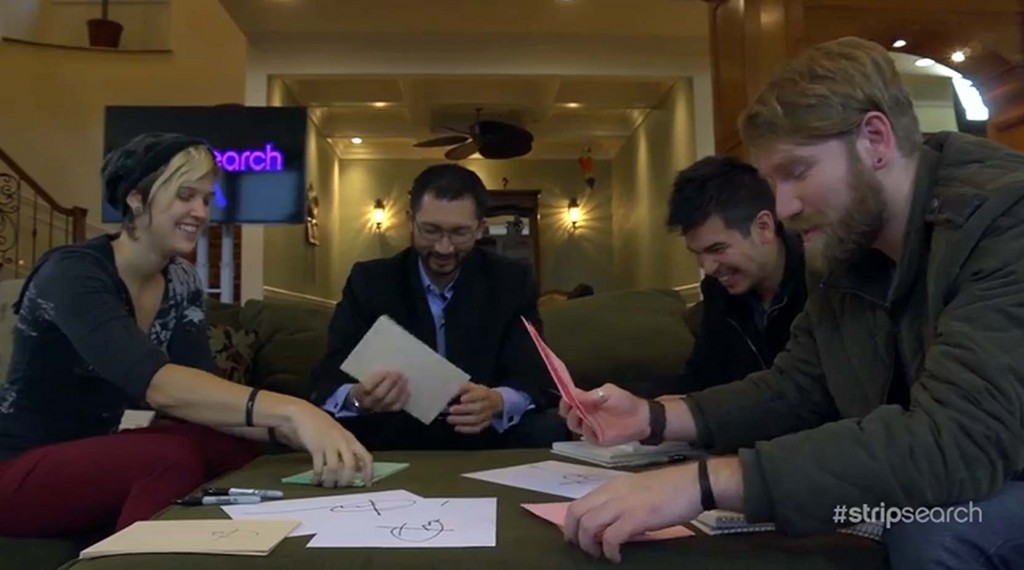 In a particularly strange challenge, the Strippers must compete to forge President Obama’s signature over and over again, because that’s the foremost skill that today’s webcomic artist really needs to survive in this economy. No, seriously, I get the point of this challenge (and why it would have been somewhat unfair to have everyone use their real signatures, which vary in length and complexity), but, I mean, it’s just…really? President Obama? That’s where your minds went when designing this challenge? 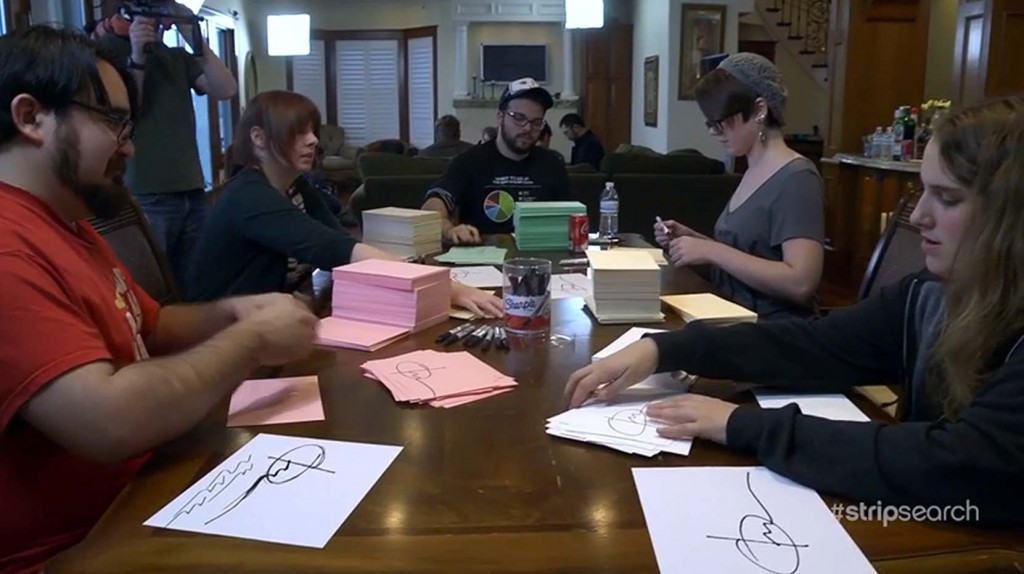 Show of hands: who now has tendonitis? Oh that’s right, you can’t move your hands.

Afternoon, Happy Artists Commune of Mass Forgery. Graham points out that just like this morning’s hijinks, this next challenge will also be about speed; the ability to sign your name really fast. Katie is psyched because her signature is just KR, while Tavis is bummed because his signature includes a little drawing of a face “with a hairline,” but Graham quickly points out that it doesn’t matter: they will be signing President Obama’s signature instead of their own. I think the elephant in the room here is that Obama’s signature kind of looks like a caterpillar that settled on a boob. I don’t get the point of signatures that look nothing like actual words, never have.

Fortunately, Khoo reads my skeptical mind and explains why this is a good idea, even prefacing it with “So I know this may seem like bullshit,” verbatim. He notes that the PA staff have often had to sign a large number of pieces of merchandise, and fans will actually get annoyed and send an email if the signatures look rushed and crappy, so it’s important to keep the sigs consistent. I think this problem may be rather unique to Penny Arcade– I can’t imagine that many webcomic artists have to sign such a huge volume of material, except maybe Scott Kurtz. Anyway, the Strippers will get one point for every decent signature they do, and lose one point for each one they mess up.

Here’s the problem with this challenge, other than the fact that it sounds weird just on the face of it: trying to copy someone else’s signature is very different from signing your own, or even a variation of your own. You’re starting from a position of -100 when you’re trying to copy the way someone else draws letters; that’s why we use signatures as a form of identity verification, obviously. I honestly think they would have been much better off if they had everybody use their own signature, and those with more elaborate signatures (like Tavis) could have developed a simplified version– something it seems like they’re going to have to do anyway. They could have given the artists ten minutes to develop a “sample” signature” that their future efforts would be judged against, then the playing field would be pretty much leveled. As it stands, it kind of bugs me, because “forge this signature consistently” is actually a different challenge from “sign your name consistently,” and the first one is kind of irrelevant.

And the mass forgery begins! Probably the most interesting part of this whole episode– for me, anyway– is Katie pointing out that consistency isn’t really her strong suit, since her natural style is to draw very fast and loose and “rely on my mistakes to make my drawings interesting.” That’s probably the best description of utilizing a loose drawing style that I’ve ever heard. Of course, since Katie is Katie and improbably good at everything, she is naturally killing it with the sig copying. Josh is yelling out comically mean criticisms of the signatures, which starts out amusing and becomes even funnier if you choose to believe this is his revenge on the artists for being passed over for the ping pong tournament. 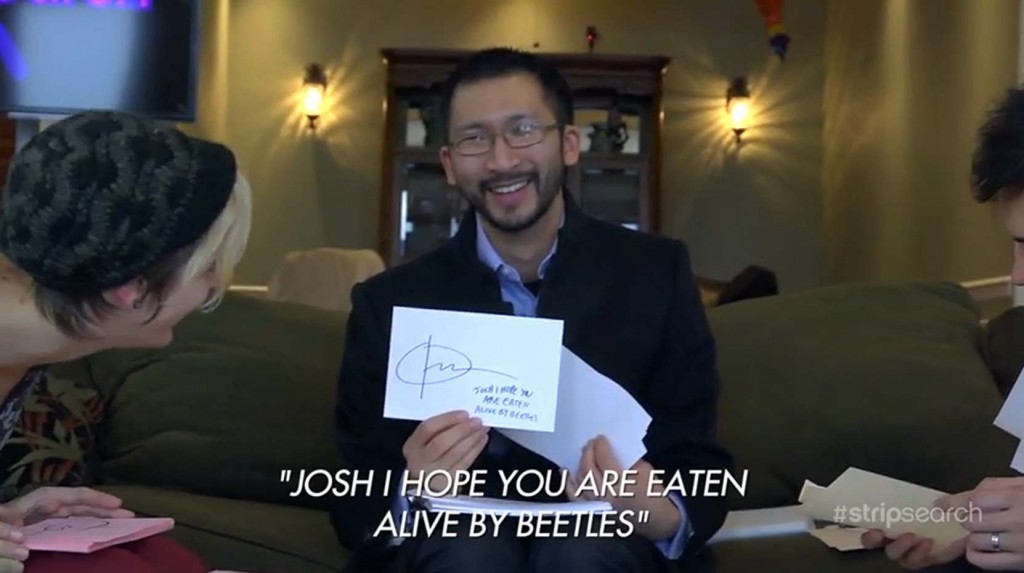 It’s actually a little unclear how the judging is working; the judges are evaluating piles of everyone’s sigs and yelling back criticisms, but the artists don’t know who the criticism is directed at. It seems like the criticism is more about heckling to throw people off their game than actual feedback, which is par for the course. Eventually Abby in particular starts to get really pissed off at Josh’s heckling and starts writing special messages to him on her cards, like “I hope you get eaten alive by beetles,” and “I hear there’s a cactus that needs fucking, you should go do that.” See, this is why Abby is a comedy genius; in that situation, I would have gone with the tried-and-true “I hope you die in a fire,” but she always finds a way to go just a little further.

Lexxy confessionals that things that are simple are often the hardest to get right, and I would ding her for pointing out the obvious had I not encountered this EXACT problem with something I was drawing this morning. As obvious as it is, it’s still kind of daunting when it’s staring you right in the face: “Why is something this easy to draw also so hard to draw?”

Once again, Katie is the winner and has to pick two people to put up for elimination. Ultimately, she decides to single out the two people who’s art she appreciates the most– Lexxy and Maki–and spare them, meaning the others (Tavis and Abby) have to face the music. Assuming that she’s being honest about her reasoning (and I have no reason to think otherwise) she’s actually doing the honorable thing by keeping whom she sees as the very best competitors in the game, so she has to get past them to win it. Of course, from where I’m sitting Abby is one of the top competitors left, but Katie didn’t get a chance to see Abby’s elimination strip, so she doesn’t have the same information that we do.

NEXT TIME: Time for another sassy elimination episode; this is the first time two elimination vets are going up against each other, so it should be interesting. I’m rooting for Abby to win this one, but I’m not counting Tavis out; his sense of humor seems to resonate with Mike and Jerry, so if he comes up with a good idea he might take it. I do like Tavis, but it’s going to be white-knuckle viewing for me on Friday to see if Abby can bring the funny once again.