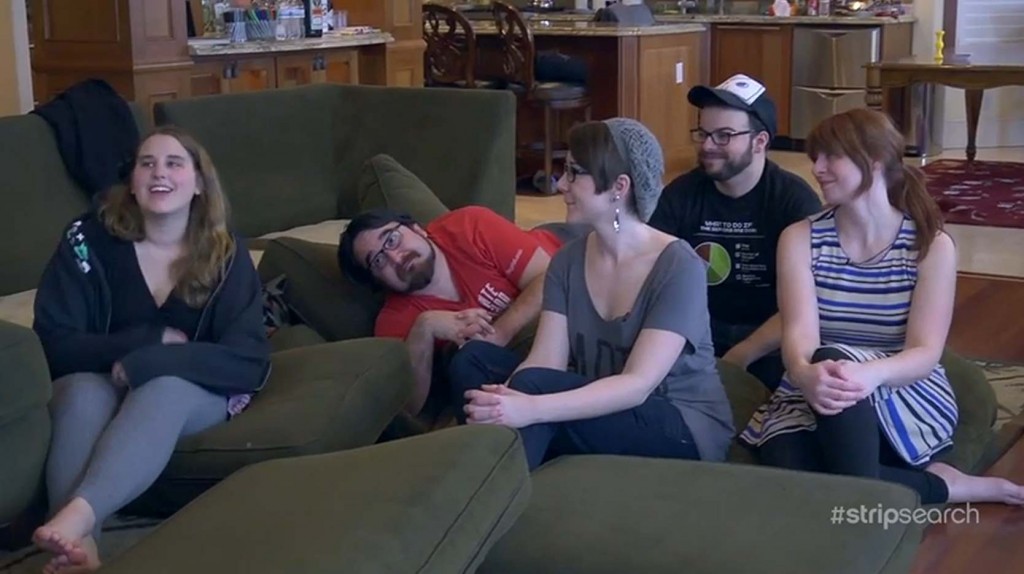 It was the best of episodes, it was the worst of episodes. On the side of the angels, we get to hear everyone’s thoughts on both the last elimination and what to expect during the final leg of the competition, and it’s a nice change. On the minus side, this game they play should not be played in a house with so much furniture, and it’s darn lucky that everyone escaped sans concussion. 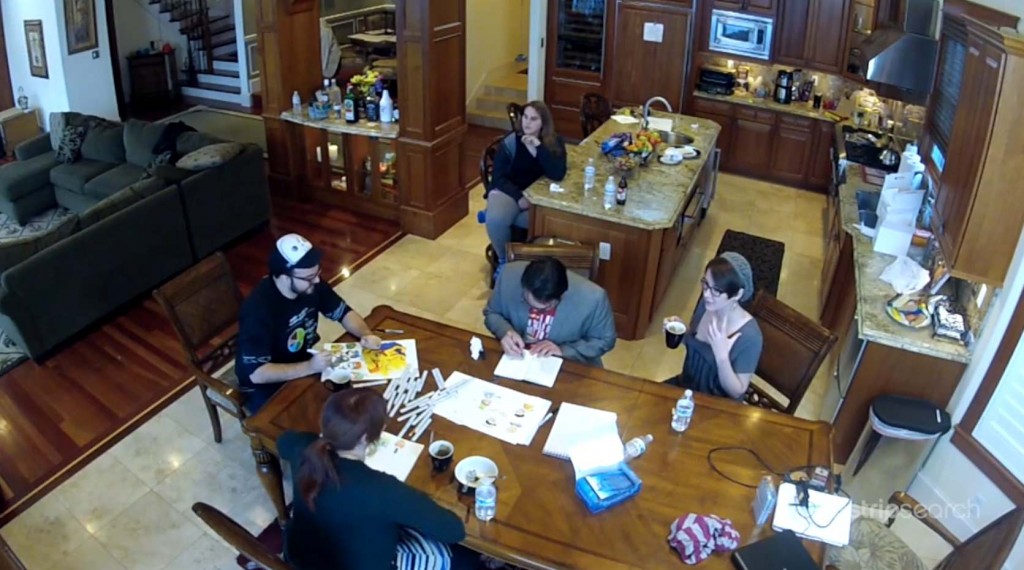 This is a sitcom just waiting to happen. Make it so, PATV.

Okay, I have a major issue with the game the contestants played in ep. 23. Watching them run around the house looked really dangerous, and that could have ended in a bad injury really easily. I know this might seem inconsistent, since I had no problem with the go-kart challenge, but I think that was different: in the go-karts, not only were they wearing full suits of protective gear, but even if they crashed, it was the kart taking most of the damage. Plus, in that situation people know they’re going fast and self-preservation usually keeps them from going too nuts.

Just running for broke around the house though? That’s where a lot of the most serious injuries happen. It’s so easy to get a foot caught on a chair leg and face-plant into the hardwood floor, or a countertop, or a cabinet. The frenzied nature of the game, with people scrambling to outrace each other, makes it even more dangerous, because they can trip over each other too. I know some viewers take issue with the artists doing anything physical because it’s a)irrelevant and b)dangerous for their hands, but I don’t have that issue; these people aren’t delicate little flowers who need to be kept in bubble-wrap for their own protection. I just ask for some common sense: as it stands, the show is damn lucky that the only fall was from Lexxy, the Indestructible Illustrator. If they do a Strip Search S2, I suggest that they not repeat this challenge, or anything else that involves running full speed around the house.

ANYWAY. Morning, Happy Artists Commune of Coffee and Copic Markers. Psychic!Katie, Pineapple!Maki and Dad!Tavis are all drawing at the dining room table, while Indestructible!Lexxy leisurely sips coffee and Tangential!Abby looks on. The whole scene looks so cozy and friendly and domestic, and it makes me wish I had my very own Happy Artists Commune to live in and draw with people. Then again, the major effect of Strip Search on me personally is that it’s making me long for IRL friends to draw with, so this is par for the course. Lexxy confessionals that she’s starting to feel like an imposter because she doesn’t really do a lot of comics and her illustration background keeps coming up, and what? Didn’t we just go over this last episode, where winning a comic-off showed Lexxy that she is totally a real comic artist and belongs there? Lexxy! Pay attention to your own story arc!

Everyone confessionals about how great Monica is, and Maki especially seems to be missing his best gal. It’s a nice send-off for her now that she’s out of the game— well, probably. They even show us clips featuring Monica’s “dark side,” mainly her saying unrepeatable things to Mike, as if anyone could have possibly forgotten and need to be reminded of that. Monica of the Dark Sass will live on forever in adorable infamy.

Graham pops up and reveals that they’ll be following up their physically demanding day of ping pong with a physically demanding board game, Jungle Speed, and I have to pause for a moment to ask a question here: is it really a board game if there’s no board? I know board games come in many shapes and sizes, but I thought the main criteria for board games was well, you know. Abby confessionals, “Like Egyptian Ratscrew? That sort of thing?” What the fuck, Abby. How is something called “Egyptian Ratscrew” a frame of reference for you? Tavis speculates that they will all be driven to a forest where a naked Jerry will chase them around, and not only would that have been much more fun to watch, it would have been far safer; there would be room to run around in a forest. Jot that idea down for Strip Search S2, Bionic Trousers Media.

The first version of the game is okay because the gameplay is all centered around the table, but when they start playing “Extreme Rules” edition, the totem they have to grab when they get a card match is moved halfway across the room, and they have to run over and/or around the couch get it. This gets even sillier when the game includes the ability to move the totem wherever you want, including up the stairs, in the pantry, etc. Even if it wasn’t dangerous, the way they’re playing is unfair anyway, because whoever is closest to the totem has a huge advantage. That person is usually Abby, and, SHOCK!, she eventually wins. I can’t believe no one suggested rotating positions to give everyone a fair chance, but maybe they liked this activity about as much as I do and were just trying to get it over with ASAP. 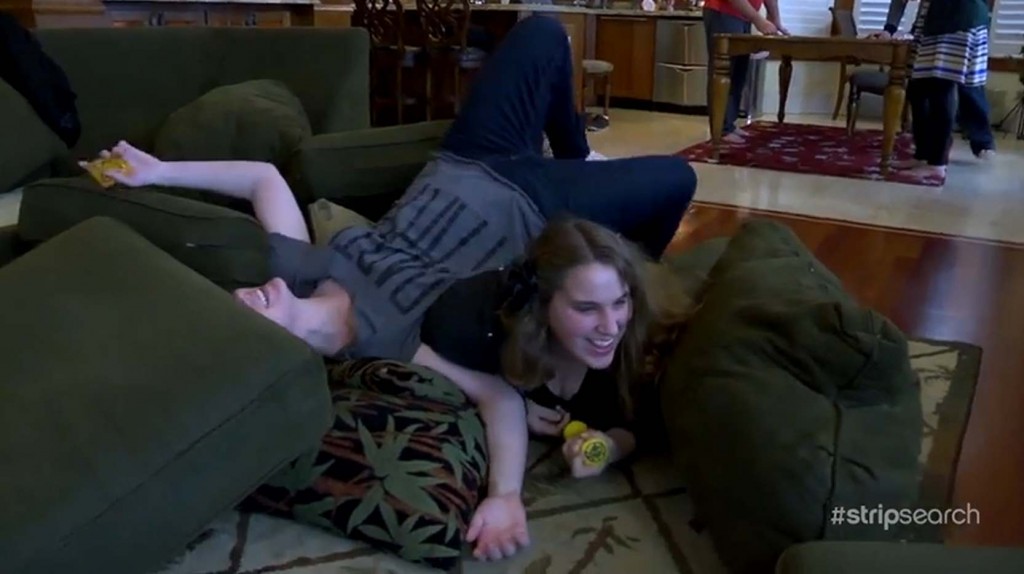 Abby wonders if she is dangerous and should perhaps not play games anymore, but we know better: she should play more games. All of the games.

Just to clarify, I don’t have anything against the game Jungle Rage; it looks like it could easily be played fairly, and even if you want to play “Extreme Rules” edition, it’s possible to do it in a space where it won’t be that dangerous, like outside in a backyard. Or in a large room with thick carpeting and very little furniture with pointy corners. It’s just a bad match for this particular situation.

That said, the entire sequence is not without it’s charms; at one point, Katie stalks Abby like a T-Rex stalking a gazelle, and it is about as adorable as it sounds. At another point, Katie plays a fantastic mind game with Abby to steal the totem from right under her nose, and it is even more badass than it sounds. That Katie is some psychic ninja. Eventually though, Tavis has had enough of this nonsense and buries the totem in a huge stack of couch pillows, the better to shelter his foolish young competitors from breaking anything when they dive for it; you can see the Dad in him, protecting them all from themselves like that.

After the game concludes, Graham tells Abby that she’s won “An entire jungle and some speed.” Thanks for stealing my idea for the recap title, buddy. She actually wins a Redraw Ticket, which is interesting because she may be the one who can potentially get the best use out of it. As the closest thing to a pure gag cartoonist this group has, she’s probably more dependent on getting topics she can use than the others, who are partially counting on their art to save them.

But wait, the challenge is over but the episode isn’t! Tavis confesses that he’s missing his family, and normally when reality show contestants do that it sounds kind of whiny (“don’t want to miss your family? Then don’t sign up for a TV show!”), but in this case it just sounds like a simple statement of fact; he is enjoying the competition, but the longer it goes on, the more he’s missing at home with his wife and son, and it’s starting to hit him. Ain’t nothing snarky I can say about that. However, it seems like he may have lost the will to battle a little– like Erika, I’m not sure if he really wants the prize as much as, say, Abby and Lexxy do. That could hurt him, but it could also work in his favor, because he might be able to relax more and do his best work because he’s not scared of elimination. CURIOUS!

This is a really nice scene, with Tavis and Abby just chatting. He’s a Dad with about ten years more life experience than her and lots of responsibility, and she’s a young lady just starting out, and under normal circumstances, they would never have a reason to connect like this. It might sound trite that the opportunity to bond with other people in the competition is the most important prize of all, but I really think it’s true in this case in a way it isn’t for most reality competitions. For Abby especially, it’s like the whole world is opening up to her, and as much as I like her, I’m slightly envious that I didn’t get to have a great experience like this at her age.

The two also leave us with this exchange.

Abby: The first thing I’m going to do when I get back is check if my cat is still alive. What about you?

Abby:…that’s the second thing I’m going to do.

NEXT TIME: It looks like the strippers will be tasked with something that requires consistency, which may be signing things over and over again, or may be some kind of hand-lettering? I’m not sure, but it involves the extended PA staff coming in and acting like jerks, and that’s always a good time- for me, anyway.