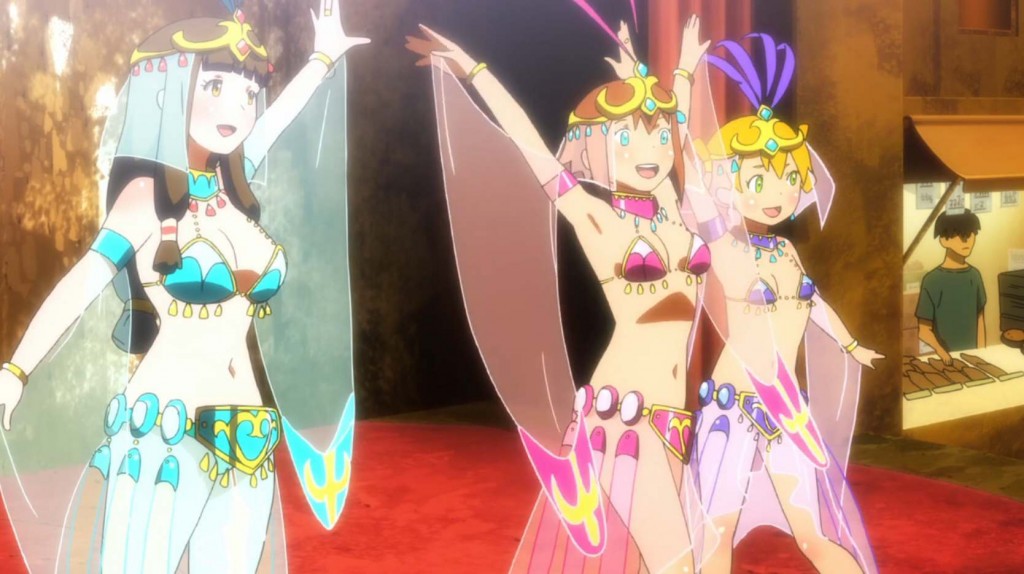 I would tend to agree that the show would be improved if it dialed down the fanservice in general, but episode 6 made me wonder: was the belly-dancing scene really fanservice at all? I don’t think so, and I think that goes to show that the frequency of quasi-exploitative nudity, in the form of fanservice, has so thoroughly annoyed us that we have no tolerance left for sexual content that actually serves a purpose. 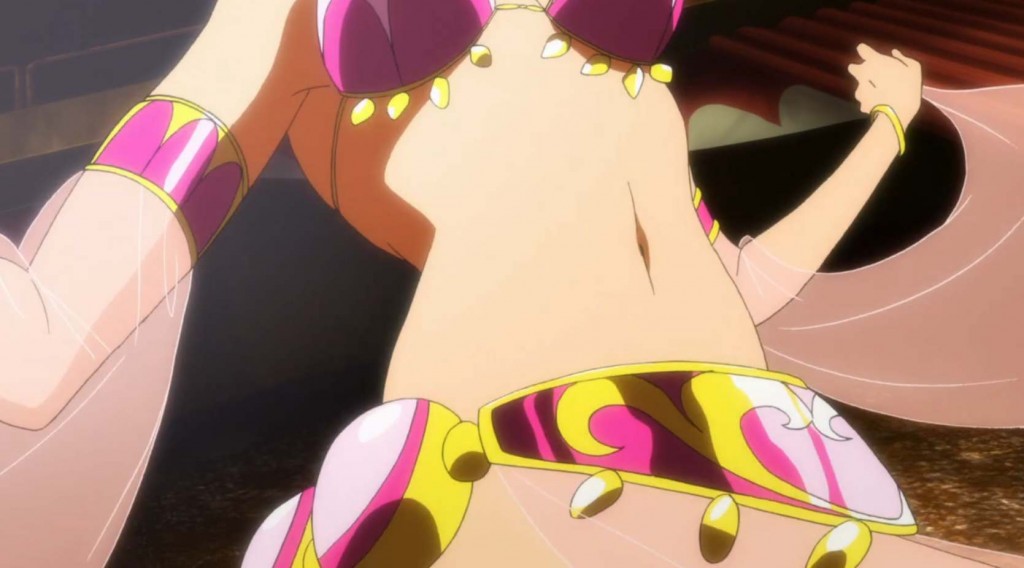 Fanservice is, as I understand it, sexual content in a piece of media that serves no story function other than to attempt to please the viewer by showing them something sexual. The belly dancing scene in episode 6 served several purposes: First, to show the earthy, physically oriented culture of the Gargantians, as compared to the sterile world Ledo comes from. These people may not have the high culture or scientific prowess of their ancestors, back before the earth was flooded, but they do have priorities: good food, sex, and good buddies to work and play with. It also showed that Ledo, who was programmed from birth to think about nothing but serving humanity as a soldier, is becoming seduced– both figuratively and quite literally– by the lifestyle that he’s seeing. It doesn’t even occur to him to ask what the purpose of Amy’s dance is, because he knows that it gives pleasure, and pleasure is a worthy end.

That’s a different Ledo than the one we met six episodes ago, and not only this scene, but the entire episode, communicated that very well. No one has to give us a lame, expository “Wow, you’ve sure changed, Ledo!”

“Okay,” says you, the discriminating anime fan who doesn’t like tawdry sexuality inserted into your entertainment without good reason. “Fair enough, the scene served an actual story purpose. But what was up with those extreme torso and butt closeups? Wasn’t that excessive, and therefore, the scene crossed the line into fanservice?”

To me, this is where it gets interesting; I think the easy answer is to say yes. Yes, they didn’t have to show the extreme closeups of Amy’s hips. Yes, they could have got the same basic message across while making the scene less overtly sexual. But again: even if the scene was overtly sexual, does overtly sexual automatically equal “unnecessary,” hence fanservice?

Once again, I think the overtly sexual nature of the scene served a valid story purpose. Ledo is going from being a person who thinks only in terms of numbers and probabilities to someone who values physical sensations, and sensations can be overwhelming, overpowering– especially if you’ve been denied them your whole life. The whole scene is about his entrance into a world of primal desires and emotions– sex, the satisfaction of eating a filling meal, a cold beer after a hard day’s honest work. He’s being bombarded with these feelings, these possibilities that exist in a world he never knew, and the close up of the dancing bodies– focusing on their sheer physicality– drove that point home better than a more “tasteful” scene would have. I would also argue that the later scene, where Ledo asks Amy to dance for him, would have been much less tender if it weren’t in contrast to the raw sexuality of the original dance.

So, what is my purpose in saying all this? This episode just made me think about what pervasive fanservice has done to many of us as anime fans; cultivated a more-than-healthy cynicism of anything remotely sexual in nature, to the point where it can dull our perception to what’s actually going on when sex is invoked. I don’t mean this in an accusatory way, but how many of the viewers who have labeled that scene as fanservice considered that maybe it wasn’t? And how sad is it that “maybe it wasn’t done for fanservice,” actually sounds like a kind of ridiculous supposition in the current anime market?

To put it another way, the problem isn’t Gargantia episode 6, it’s most everything else, including, arguably, Gargantia episode 5. When we don’t have T&A pushed in our faces constantly, we’ll be able to confidently assess just what sexualized content is doing in a particular show, and whether it ultimately serves the story or not. Right now, I think a lot of us are so desensitized that we can’t parse the meaning of sexuality on screen, or rather, see no incentive to look for meaning; our “unnecessary sexual content” switches have been flipped so often, we’re like fire alarms in hell.

There are much bigger problems in the world, but personally, I think that’s a bit of a shame. I wish the overabundance of fanservice didn’t have to pretty much ruin any and all sex in anime.

9 thoughts on “Gargantia 6, Or When Is Fanservice Not Fanservice?”