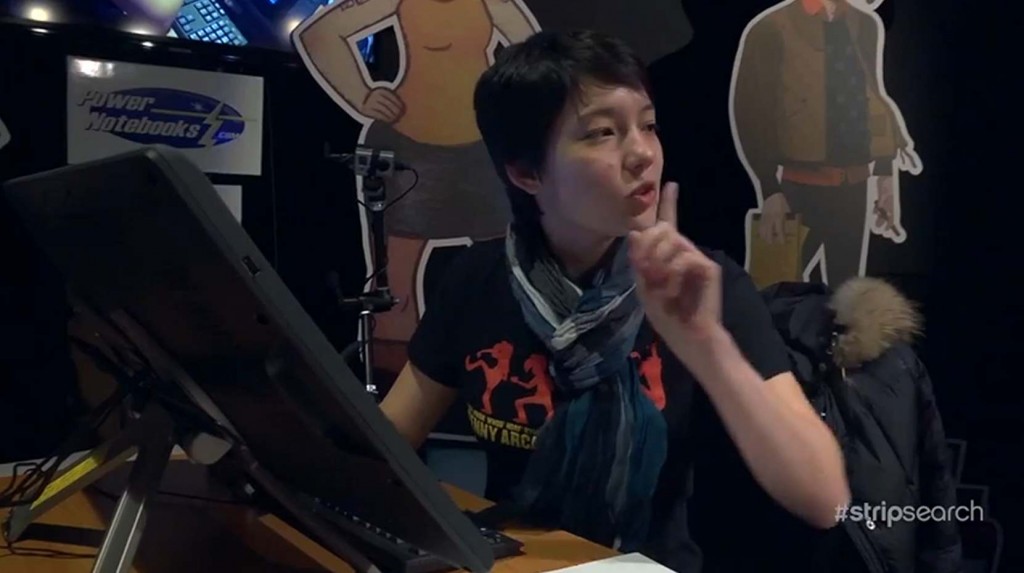 For Elimination #7 in the Comic Battle Dome, it’s the epic battle of The Great Lexxy Conspiracy Versus The Great Monica Conspiracy. For those that don’t already know, The Great Lexxy Conspiracy is the idea that the entire competition is rigged in favor of Lexxy, because Penny Arcade would totally stage an entire reality show competition to invent an excuse to hire someone they could hire any time they felt like it. The Great Monica Conspiracy is the idea that everything is rigged in favor of giving Monica the opportunity to counter-troll the internet’s most accomplished trolls like a tiny, trash-talking steamroller, and get free Sour Patch Kids at the same time

I think it’s safe to say that of the two, the Monica Conspiracy is the one with real merit, because at least we have video evidence of Monica downing some Sour Patch Kids. Oh, and some comics were drawn. 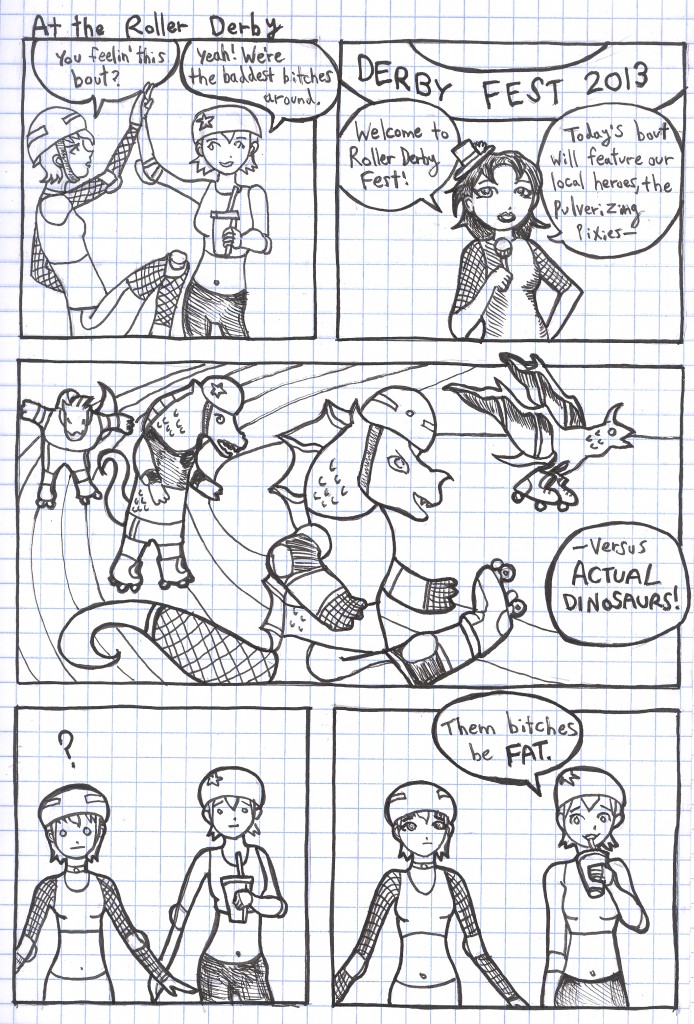 As threatened last time, I took a page out of Abby’s book and used paper and pens for this. I even drew it on graph paper to save myself the time of drawing the panel borders with a ruler. It, uh, didn’t come out quite like I was hoping, but I do like my dinosaurs wearing fishnet; you can always tell the derby girls by the amount of fishnet on their person. The flying dino with skates also makes me happy.

Now that I think about it though, this would have been much funnier if the final line was a simple “They’re fat.”  Le sigh.

Back To The Show

I usually watch these episodes twice; once with my morning coffee, and once later to recap and get a few screenshots. This was the first time I ever felt substantially different about an elimination decision on the second watch.

On first viewing, I thought Lexxy’s Dinoskates comic was hilarious, and I really envy the whole zen thing she has going on with her artwork– in only a rough sketch, she can get across so much. Granted, she doesn’t draw that many lines compared to the other artists, but the lines she does draw seem to always be in exactly the right place. I have no idea how she makes that work. I didn’t pledge for her Cloud Factory project, but if she puts up a Kickstarter where she makes videos to teach people the ancient secrets of Lexxy Zen Sketching, I will back the hell out of that.

The second time I watched, I was already over the Dinoskates joke and I was struck by just how much Monica got done in 90 minutes. Like with Erika’s comic, I was amazed that she got so many panels done, and some of them had actual BACKGROUNDS, even. The strip wasn’t laugh out loud funny, but it had a certain subtle, wistful kind of humor to it. Also, whereas on the first go I was a bit confused (I thought the sleeping dinosaur in panel 7 was actually a baby dinosaur, hence the guy was giving up skating for the sake of his child), by the second time I got the flow of the story and was able to appreciate everything that was going on.

By the time I finished watching I had realized that, despite my initial “LOL Dinoskates!” reaction, I actually liked Monica’s strip far better. there’s something sublime about the last few panels of the dinosaur strapping on his skates and skating away, his breath visible in the chilly night air while the streetlamps light his way.

That said, I can’t really begrudge the creators the decision they made. I was pretty sure once Mike asked Jerry to help him understand what exactly was going on in Monica’s comic that she wouldn’t be winning that one. Ultimately her’s was the far more ambitious piece, but the execution could have been improved; I’m not sure what precisely she could have done differently, but there was probably a way to tell that story that wouldn’t have initially confused some readers. If she had nailed the execution and the piece wasn’t confusing, I think the judging process would have been a lot more drawn out and laborious than it was, very much like Elimination #3.

I know there’s been some debate about whether it’s right that the creators seem to just about always favor “funny” over any other consideration, but whether you agree that they should or not, there was another factor in play; one strip was confusing, the other wasn’t. Given that both showed plenty of skill, it’s not really surprising that they picked the one that read more clearly. Still, I wonder if Mike and Jerry went through a similar process to me: if, once they’d had some time to think about it, one or both of them was awake at 3 in the morning thinking, “Actually I like Monica’s way better now….”

Of course, winning and losing aside, the real fun of this episode was watching Monica completely refuse to put up with Mike’s heckling; to be frank, I’m surprised it took this long for a contestant to get noticeably pissed off by it. The ongoing internet debate about this episode seems to be “Did Monica go too far?” and I don’t see it; he was heckling, as is his right as a judge on an irreverent reality show, so she gave back as good as she got, as is her right as a contestant on an irreverent reality show.

I know Scott Kurtz made a comment on Twitter along the lines of “I would never tell Jim Davis or Charles Schultz that I would fuck their mom,” but she didn’t say it to either of those luminaries; she said it to Mike Krahulik, who is the first to admit he makes a large portion of his living from some of the crassest humor imaginable. Kurtz is entitled to dislike anything he wants, but it really isn’t a fair comparison at all. In the same vein, if you found watching Monica’s responses “cringe-worthy,” I don’t deny your right to feel that way, but I don’t really get it. I mean, as I write this, today’s Penny Arcade is about a woman’s vagina that looks like the inside of a pumpkin, leading to violent vomiting; this is not an audience where you have to worry about offending their delicate sensibilities. It is much closer to the opposite of that.

In fact, if you want to pick one comment that went too far in this episode, that honor actually belongs to Lexxy; her admission that she didn’t think her strip this time was any better, but the “competition wasn’t as stiff,” seemed like a real slap in the face to her opponent. This is what I meant a few episodes ago when I said I thought Lexxy was sometimes tone-deaf about how she sounds; I’m pretty sure she didn’t mean to disparage Monica’s skills at all, but it’s so easy to interpret that comment that way. I find the idea that Lexxy’s a villain to be laughable, but the fact remains, if there’s one comment in that episode that rubbed me the wrong way, it was that one.

You know, this brings up an interesting question about what really constitutes offensiveness when you throw away knee-jerk notions that certain concepts are automatically offensive. In theory, saying “I want to fuck your Mom” to someone is really offensive, but no one in their right mind actually thought Monica meant anything personal by it– there was no threat to anyone’s actual mother, it was just a “see how hard I sass you back?” kind of comment. Whereas, though it contained no offensive language whatsoever, Lexxy’s comment that beating Monica was easier than beating Tavis seemed harsher to me because it made it sound like she had less respect for Monica’s skills. I mean really, what’s offensive when we accept four-letter words as the kind of cultural shorthand they are and stop taking them so literally? But I guess that’s a bigger topic for another day.

NEXT TIME: With only five artists remaining, the Happy Artists Commune of Destiny is starting to look really empty. The competition may take on a different tone now that we’re getting down to the wire; I’m interested to see if people are forced to act more like contestants on a reality show now that the prize is so close. You have to wonder: during future eliminations, will everyone constantly be telling Mike to go suck a dick and/or go fuck himself, now that Abby and Monica have made it clear that’s a perfectly viable option? And am I a terrible person if I hope the answer is “Fuck yeah”?