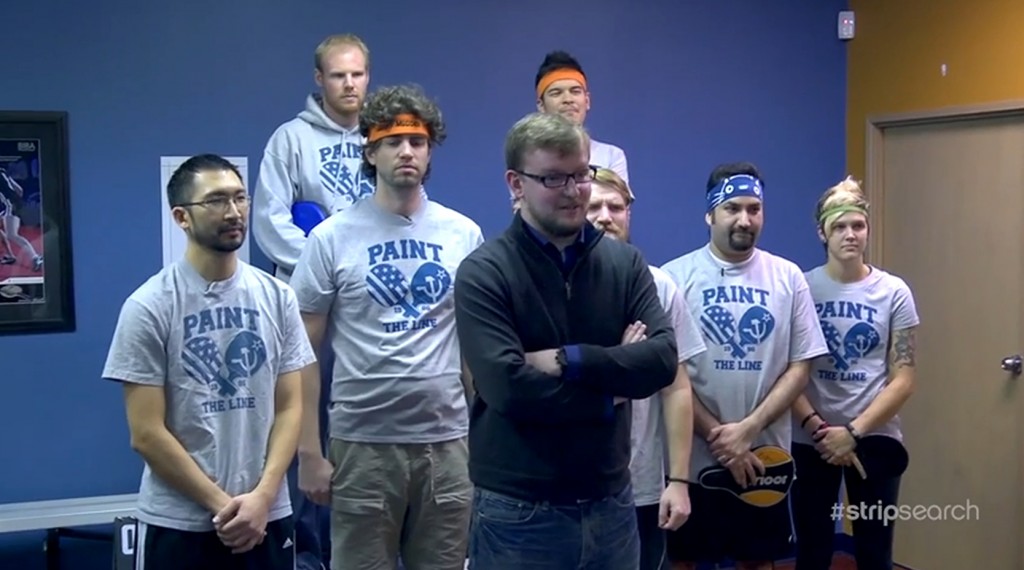 They actually did it: two ping pong episodes in a row. Really, Penny Arcade? Are you trying to make me watch actual sports now? No way am I recapping this nonsense! *stomps away* 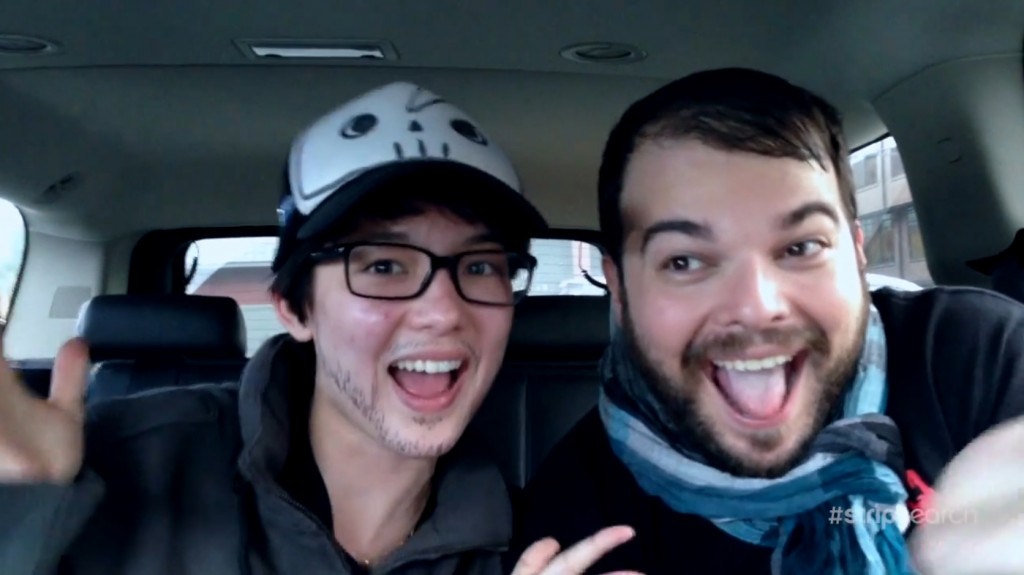 We begin with Monica dressing up as Tavis, because apparently Monica can’t be left alone in the car for five minutes without doing something ridiculous. I have to hand it to the Strip Search fandom; viewers saw about half a second of Monica with a beard in the next episode preview and immediately called “Monica cosplays as Tavis in episode 21, yeehaw!” I wouldn’t even have noticed it if other people hadn’t talked about it. I guess I just accept people with beards drawn on their faces as perfectly normal.

They enter the Penny Arcade inner sanctum, where they meet Graham at the ping pong table. Graham reveals they will be doing yet another ping pong challenge, at which point all of the contestants groan audibly- oh wait, that was actually just me. Abby does say she had already started to forget her ping pong skills on the assumption that she would never have to use them again– you and me both, Tangential One!

Being serious for a moment, I completely understand why they did a whole day of ping-pong challenges. I know a lot of people are complaining on Twitter and blogs, “Why are they playing ping pong? WHAT DOES THIS HAVE TO DO WITH COMICS?!”, but you can’t create art on demand every single day indefinitely, especially if you’re trying to make good art. Sometimes, you have to take a break and do something non-artistic, and I think it was smart of PA to give the contestants a breather day. I’ve seen contestants burn out on Top Chef, and it’s not pretty.

Anyway, the PA ping pong team files in, and everyone freaks out for a moment until Graham reveals it’s actually a doubles tournament. As the winner of the social challenge, Katie gets first pick, and wisely picks Levin; as everyone already knows, Khoo is awesome at ping pong, but Khoo is also bad at doubles. I was wondering if they were exaggerating about this to keep Katie from picking Khoo and then having an overwhelming advantage, but it does seem like Khoo has issues with doubles: he tries to go for the winning shots he makes in singles, only he’s presumably out of position so he misses them a lot more than he would in singles. At least, that’s the impression I got from what they showed. 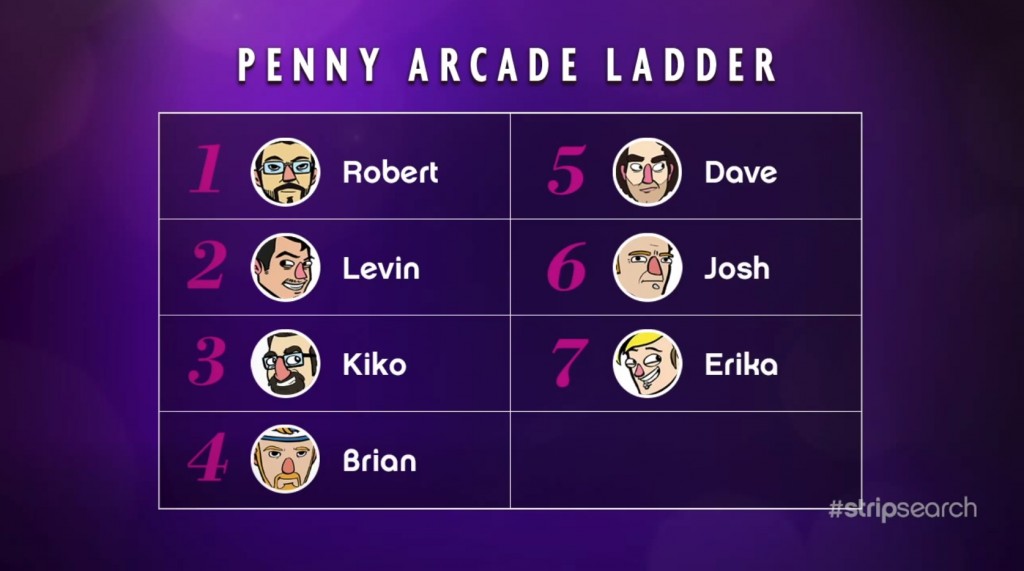 If I were Erika, I would lobby for a new portrait.

People pick their partners, with Lexxy picking Khoo last, and Josh makes an adorable sad face when he realizes that no on has chosen him to be their partner. Daaawwww. I have no idea what that guy even does at Penny Arcade, but suddenly I like him a lot more. Playing doubles means that people have to take turns hitting the ball, and it seems like about 20% of the game is getting to the ball and 80% is getting out of your partner’s way. I have played ping pong singes before, but I think if I tried to play this way, I would slam into my partner and end up with a concussion. It seriously looks kind of dangerous. Lexxy and Robert in particular can’t keep out of each other’s way, but fortunately it stays at the level of “clumsily adorable” instead of “OMFG call the hospital.”

And then…more ping pong happens. Ah yeah, not commenting on that, except to say that Erika and Monica look really great together. I don’t know what it is, but it seems like they should be the stars of “Awesome Short-Haired Girls Ping Pong Show” or something. Granted, I wouldn’t watch that show because enough with the ping pong already, but someone definitely would. I guess proponents of The Great Lexxy Conspiracy could try to have some fun with the fact that Lexxy picked last and still somehow got Khoo as her partner, but meh– I’m bored of The Great Lexxy Conspiracy. I want a Great Katie Conspiracy, where people argue about whether or not it was fair for Katie to enter this competition with the knowledge that she is basically the Serena Williams of table tennis, because she wins AGAIN. Of course, it’s not that surprising that winning a ping pong challenge might lead to winning another of same…

Since they aren’t even pretending to base the eliminations on that day’s challenge anymore (and good on them for that), Katie picks Monica and Lexxy because they’re the only two left who haven’t won a comic-off. Monica was expecting it and seems mentally prepared, while Lexxy’s expression is harder to read. Of the two I’d prefer to see Monica take it, but I could see it going either way. Some people have been saying that if you watch the teaser video that was released before Strip Search began, you can see a snippet of footage that hasn’t been shown yet that reveals the winner. I have no idea whether that’s true, or if it was intentional misdirection, but one thing is for sure: that teaser video has now been analyzed about as much as the Zapruder film from the day Kennedy was shot.

NEXT TIME: Looks like Monica tells Mike off with fervor at least once. If we ever have a Monica vs. Abby Elimination, it’s probably going to culminate in both ladies telling him increasingly obscene things to go do to himself, while Jerry just sits there quietly and beams with pure joy. I hope that day comes, hence I’m rooting for Monica.