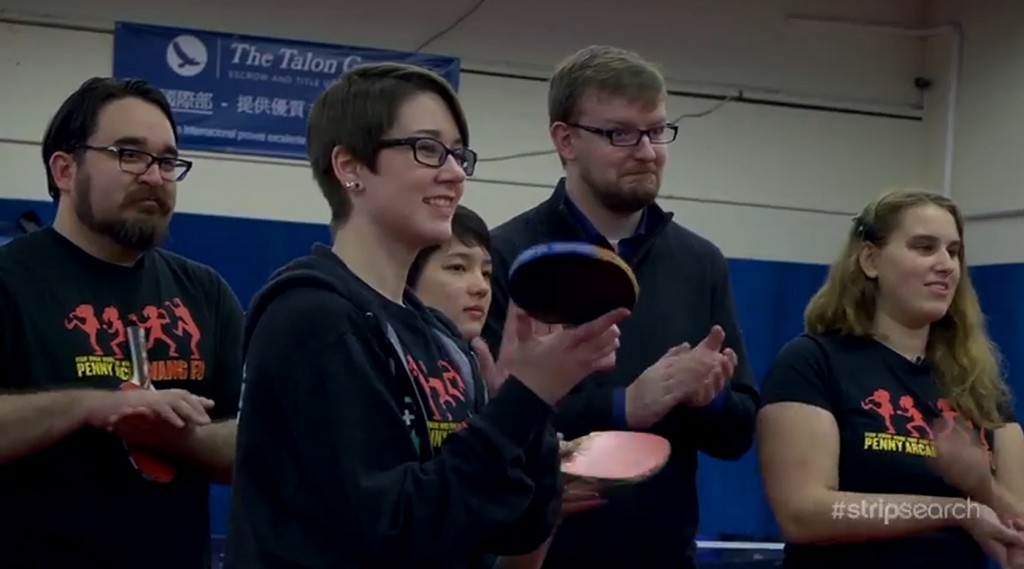 Lexxy: I respectfully acknowledge your ping pong skills, but never forget that I can draw circles around you. CIRCLES.

Graham: Well, that was …respectable?

Abby: I pull off a great upset and you make me play SPORTS? FUCK.

The inevitable Ping-Pong Challenge finally happens, and the dirty secret of Strip Search is revealed: Robert Khoo has just been using this whole competition as a ruse to recruit another talented table tennis player to his team, in order to continue Penny Arcade’s dominance of the sport(?) in the greater Seattle area. Unfortunately for him, none of the Strippers are all that great at it: Katie is the best, and even she calls topspin a “spinny-thingy.” 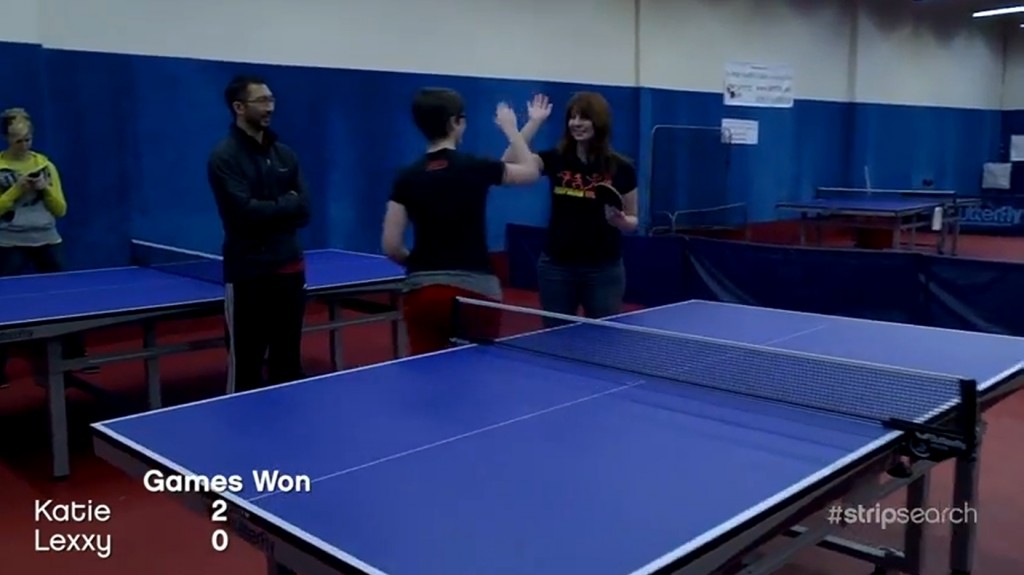 Before we start, I have to share that I’ve been wanting to make a little Strip Search theme song for a while now, but the opening theme is proving impossible for me to make up lyrics for. All I ever really end up with is going “Strip search, La STriiiiiIIIIIIIP Search, La LA LA LA,” along with the music; there has to be a better way.

Morning, Happy Artists Commune of Pineapples And Destiny. Graham congratulates Abby for a job well done, and notes that Monica is the only one left who has yet to be seen on the elimination stage. To her credit, Monica does not respond “Yeah I know, and that thought has been haunting me every waking moment, so you can just STFU, Graham.” Our host reveals that today is the physical challenge the contestants have either been “excited for, or trepidatious of.” My spell check does not think trepidatious is a real word; I’m on the fence about it, myself.

They all pile into the car and wind up at the Seattle Pacific Table Tennis Club. Err, am I alone in not knowing that table tennis clubs existed? I kind of thought that Penny Arcade’s obsession with the sport was an anomaly and no one else (outside of several game developers in the greater Seattle area) takes it that seriously, but I guess I was wrong. Strip Search: Edutainment at it’s finest.

While several contestants admit that they were half-expecting some ridiculous physical challenges involving tires, hoops, or maybe even that green slime from game shows on Nickelodeon in the ’80s, Katie apparently predicted that their challenge would be Ping Pong, because Katie is psychic. More on this later.

As the top seed on the Penny Arcade ladder, Khoo is heading up this shindig, so instead of wearing his “business tycoon” hat, he’s wearing his “obsessive ping pong-enthusiast” hat. He explains to the contestants that ping pong is a very important part of Penny Arcade culture, as those who’ve watched PATV already know. All I can think about is that somewhere, Jerry is absolutely losing his mind over the fact that PA is now big enough that there is such a thing as a “Penny Arcade Culture,” while Mike is just like, “Yeah, so?”

While the Strippers receive instruction about how to play, various contestants sound off on their thoughts on Abby’s unexpected return from the elimination stage. I think they realized when editing this episode that just watching people play ping pong wasn’t very Striptastic, so they took the opportunity to overlay some potentially dull footage with inside-baseball analysis from the contestants. Smart move. Because Katie is psychic, she predicted that Abby might take one look at the themes, say “Fuck it,” and then slam home a hilarious strip in proper 100% Abby fashion. How on-target was that?

Speaking of Katie, Tavis says she is the person he would be the most “trepidatious” to go up against in elimination. Tavis, stop learning English from Graham. Of course Tavis has no way of knowing that while Katie is a fierce competitor (and presumably, can predict the themes from the Wastebasket of Broken Dreams several days in advance), the one he should really be afraid of is Abby. That girl will show up to the elimination in inappropriate attire, be all like “What is computer?” and draw her comic with the best of 19th century technology, absolutely wreck her side of the studio, tell the judges to go suck a dick, and still win. I mean, how do you compete with that.

Meanwhile, back to actual ping pong, Monica is the only one who uses Khoo’s trademark fancy-pants paddle grip (and yes, I know that is a real grip in ping pong called the penhold, I just don’t care.) I think Khoo seriously considers calling the entire competition right there for our favorite pants-pooper, but Monica is just not that into the ping pong. What she would be into is someone giving her a clue what actually happens during eliminations, which is so not going to happen.

Lexxy is concerned that she has a handicap because short, funny comics aren’t really her strength, and people may be intimidated because of how well she draws. Eh, I know some people have been trying to shoehorn Lexxy into the “designated villain” role now that Amy is gone, but I’m not really seeing it. I could see where some of her comments could sound arrogant, but she really never says anything that isn’t true. The only thing she’s guilty of in my mind is MAYBE being a tiny bit tone deaf in terms of how she comes off at times. The fact that she’s being propped up as the villain of the piece just shows how thoroughly lacking in asshattery this show is.

After plenty of confessionals and shots of people hitting the ball off the table, the Strippers play a bunch of short games to determine who the top two seeds are, and if you think I am recapping the actual ping pong, you are delusional. Oh okay, you want some recapping action? Fine: Monica says that Lexxy has a “wicked forehand,” which Lexxy-haters will use as an example of how arrogant Lexxy supposedly is, even though Monica was the one who said it. 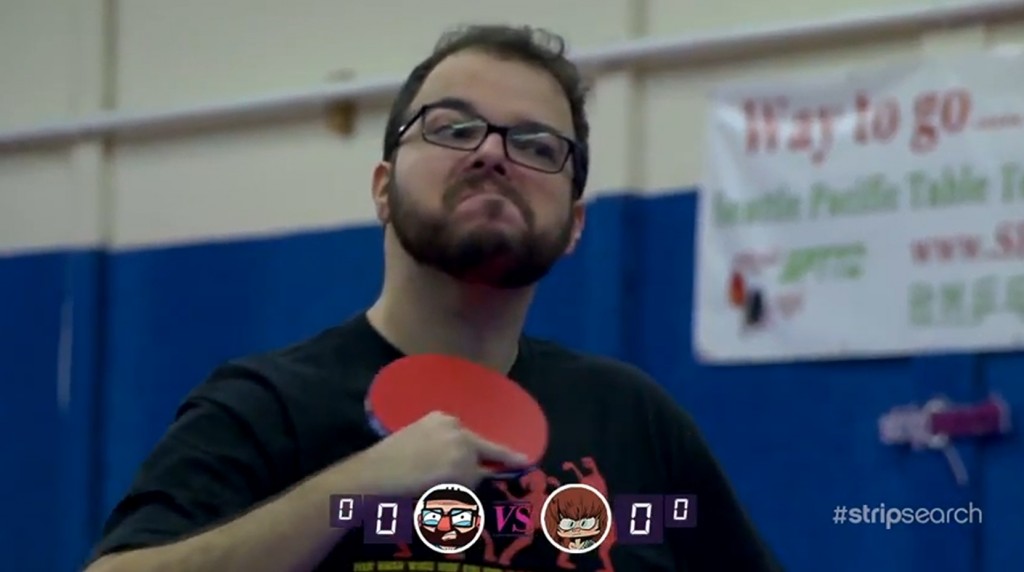 Tavis and Katie end up being the top players, so they play each other in the finals. At this point, it actually starts to look like two people playing the game competitively, as opposed to a bunch of people batting the ball around and hoping for the best. Tavis is surprised that Katie can actually return his serves, something no one else had been able to do yet, apparently. Well of course she can, Tavis– it helps to be able to see a few seconds into the future and know exactly where you’re going to send the ball.

Katie also tells us that “I’ve never known how to, like, do the spinny stuff or return a spinny thing…but it was good to know, because Tavis knows how to do the spinny thing.” Clearly, she’s trying to get a piece of Monica’s status as “the adorable one,” and frankly, it’s greedy: stop being so damn good at everything, Katie. Everyone should get to have their own thing! Speaking of which, Katie wins, because of course Katie wins. Her prize is kept a secret for now; she acts like she doesn’t already know what it is, but we’re on to her by now.

By the way, If this episode wasn’t up to your standards, just imagine Amy and Erika sipping umbrella-drinks by the pool together at the Elimination Resort; it will make your day ever so slightly better. In fact, I recommend thinking about AmErika whenever you need a lift.

Next Time: They are clearly trying to fake us into thinking that the Strippers are going to be playing the PA staffers in a ping pong tournament, but I’m pretty sure that’s not happening because that would make no sense. Granted, there may be ping-pong involved, but I’m pretty sure even Penny Arcade would not do two ping-pong episodes in a row. They may be able to earn some points through ping pong and some points through drawing, or something like that, but I will be SHOCKED if there isn’t a twist here.