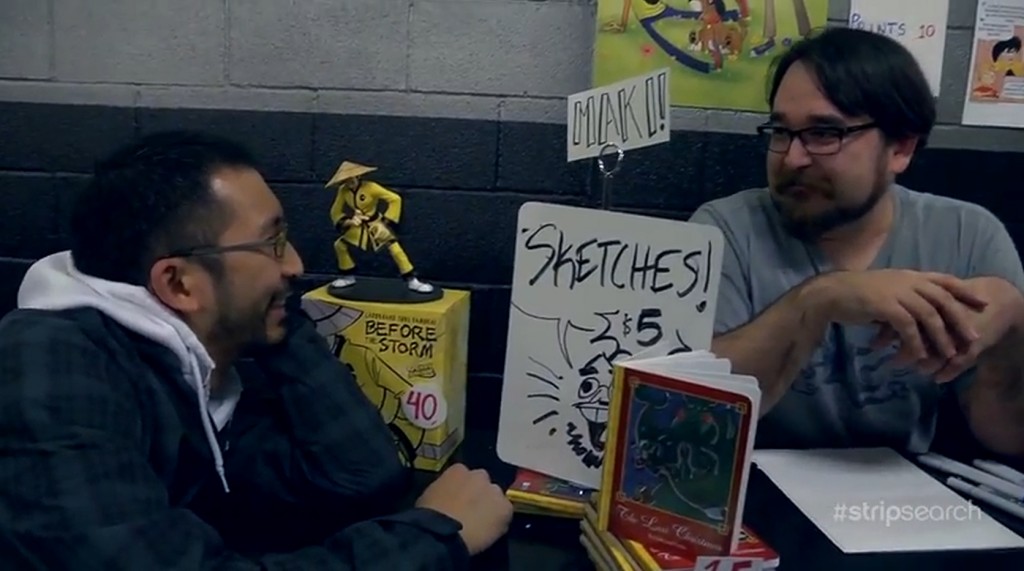 At the inaugural StripCon, our plucky webtoonists have to sketch for tips and make conversation with fans while Penny Arcade employees try their hardest to play the role of obnoxious, shoplifting trolls– which, for some of them, doesn’t require trying very hard at all.

Recap title courtesy of Monica, who has won the entire internet for reverse-trolling Robert Khoo. Seriously, whether you use the ‘net to post on boards, read political commentary or just watch hours of cat videos on Youtube, you do so at the pleasure of one Monica Ray: It all belongs to her now. 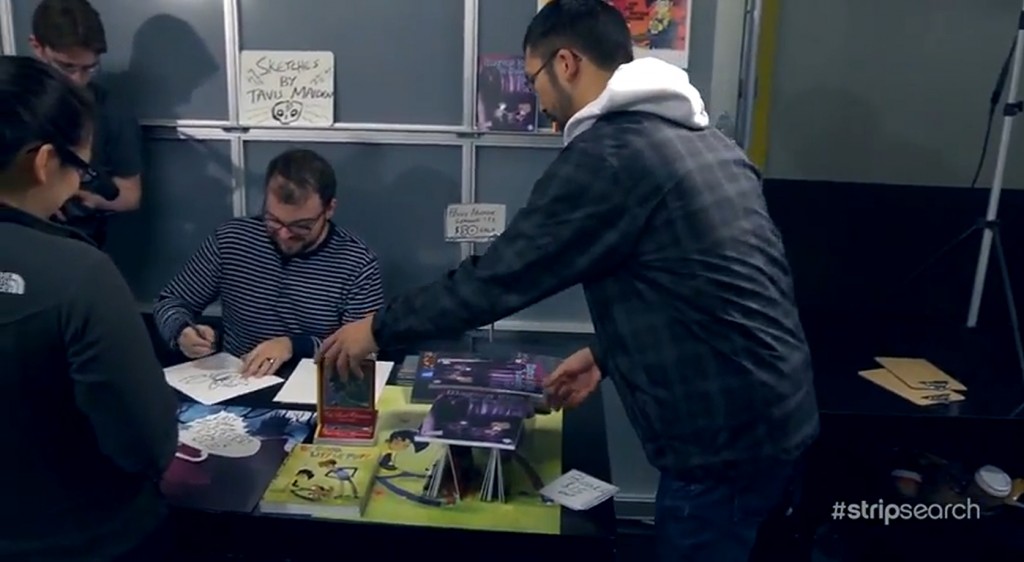 I was going to use a screen of Khoo getting his tummy tattoo, but that felt ever so slightly exploitative and therefore, icky. Instead, here’s Khoo building a tiny house out of books.

The crew ends up back at Card Kingdom, the gaming store in Seattle that played host to the booth design challenge. Graham reveals that the “Strip Search convention” he alluded to yesterday is actually happening, sort of, and they will all have to do sketches for tips. Some of the younger contestants share that they’ve never done this before, while Katie admits that having to draw on command makes her nervous; hell’s yeah, girlfriend. Seriously, the combination of having to draw quickly to order while conversing with strangers in a crowded place would pretty much be my personal hell, so this episode is about two clicks away from being a horror movie for me.

Established webcomic artist Kris Straub steps in explain the importance of convention appearances to everyone, and comments that the challenge will involve time management– at which point Lexxy  (in a confessional) emotes “Fuck! Shit! Because I’m not fast at drawing.” That would have been hilarious if they switched to Lexxy muttering expletives for about one second, then moved seamlessly back to Straub explaining the challenge. As Mike and Jerry teacheth, don’t over-explain the joke, editors.

Straub explains that he seeks to have a moment of genuine interaction with each fan, or a genuine connection, and I’m realizing now that that’s a pretty tall order. How “genuine” can you be in this artificial construction, where you’re sitting behind a wall of merchandise trying to sell people stuff so you can pay your bills, and the fan is kind of stuck in this weird middle ground between “respected webcomics enthusiast” and “target consumer who I hope buys lots of my stuff?” Granted, if it was easy, they wouldn’t have built a challenge around it, but still: that’s a pretty tall order.

The judges, whom I assume are all PA employees but it’s not definite, have adorable little Strip-Search-themed fake money to pay for sketches, while a bunch of other people seem to be just there for the ride. Robert Khoo and Brian Sunter immediately start breaking everything in sight and generally being assholes. Monica notes she is okay with the trolls, her reasoning being that she loves dealing with people and that includes trolls, so she’s just having a good time; I make a mental note to try to be more like Monica going forward. Abby confides that she has trouble drawing and engaging the person in front of her at the same time, but every time the camera is on her, she seems to be doing fine.

Khoo is going ballistic messing with people’s stuff, to the point where he actually builds a little pyramid out of the merchandise on Tavis’ table, then collapses it, leaving a total mess. “I believe it’s some sort of twisted therapy for him to finally be on the other side of that aspect of the convention experience,” Graham shares, which may be a Canadian code for “I am seeing the depths of Khoo’s sadism first-hand and frankly, I’m a little frightened.” 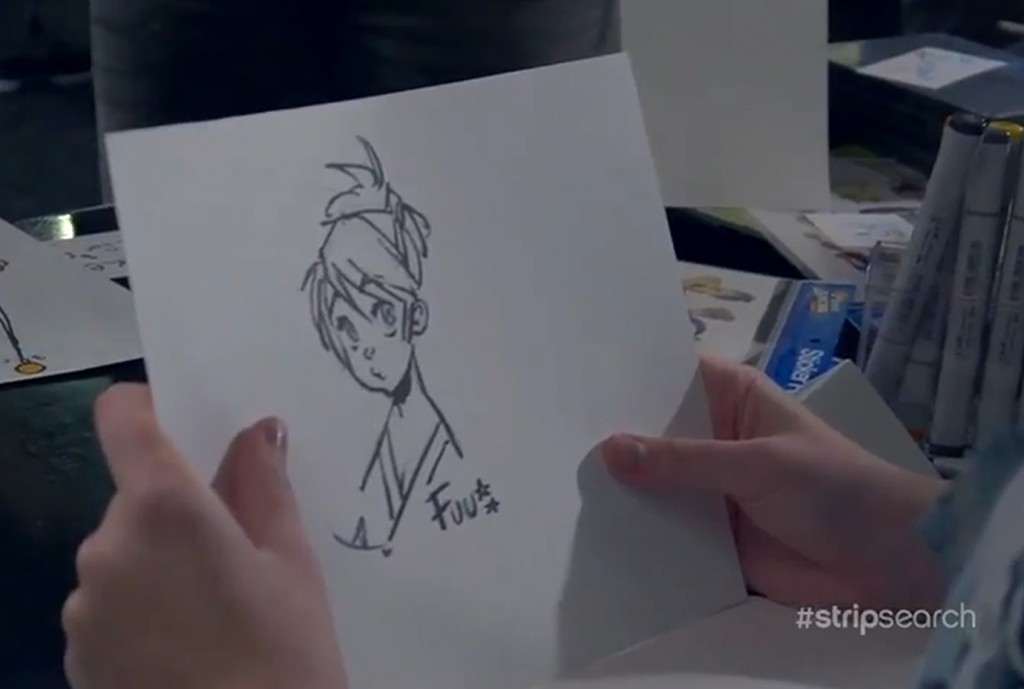 Stop showing off, LEXXY. Oh wait, it’s a drawing challenge? They have those?

Meanwhile, Sunter is contributing to the Stripper harassment by outright stealing stuff off of people’s tables. Straub is going around being obnoxious in other ways, like asking for ridiculously good deals on merchandise. For his crowning achievement of fake dickishness, he plops a sticker down on Lexxy’s table and says it’s for HIS webcomic, which is just the best and everyone should check it out! Argh, that hurts; I find self-promotional people who try to take advantage of other creators to promote their work to be actively painful to watch. Even a facsimile of it is slightly embarrassing.

Wait, I spoke too soon, Straub’s crowning achievement of fake dickishness is this:

Straub: If this shirt is damaged, can I get a discount?

Lexxy: No, I’d rather give you a nice shirt than a damaged one….

Straub:…what if *I* damage it?

Speaking of Lexxy, she gives someone what looks like a sketch of Fuu from Samurai Champloo, and its pretty impressive that she can do that from memory. Then Erika (Sadsad, not “Team Erika” Erika) comes up and asks for a hug, which Lexxy obliges. Going too far, maybe? Somewhere in the state of Washington, Scott Kurtz is banging his fist and yelling, “You’ve got to establish boundaries people! BOUNDARIES!”

Erika confessionals that she tries to get people to talk about themselves, since at cons, fans come up to her booth knowing all about her and it can make the conversation very one-sided. An interesting perspective, but in this case, these “fans” really don’t know the artists’ work, and I think that makes this whole thing ten times harder than it otherwise would be. I think it was a good idea for a challenge overall, but everybody involved has to spend an awful lot of energy pretending they’re at a real con and at some point, it becomes more about acting than communication.

Khoo’s most impressive act of trolling is hunkering down by people’s booths and staring at them while they draw from close up and refusing to move. Amusingly, both Maki and Erika send him to get them a drink in a bid to get rid of him; I wonder if Erika saw Maki do it first and went with it, or if they both independently came up with that. I think it’s funny if the seasoned con-goers all have a standard response to this: “Oh God, it’s a booth barnacle. Quick, send him for coffee and maybe he won’t come back!”

However, Khoo’s Reign of Trolling Terror comes to an end when he starts asking people to draw on his stomach. Maki goes along with it, but Monica decides to mess with him right back and draws a penis on his abs. Two thoughts on this: one, did someone just successfully counter-troll Khoo like it was no big deal, and two, isn’t that permanent marker? How long did that, err, decoration, remain on his body? Does he have it even now?

The “con” ends, and Khoo counts the fake Monopoly money to see who made the most from their sketches, which will determine the winner. Straub notes that he thought a lot of the artists were really nervous, but he chalks that up in part to the fact that everyone was pretending to be at a convention that for all intents and purposes doesn’t exist– to which I can only say “Yup X3!” At the post-challenge huddle, Graham reveals that the stolen merch didn’t actually count for anything, people were just stealing things for the hell of it. Welcome to Penny Arcade, Kitty Pryde.

Tavis wins, entitling him to another set of COPIC markers and the dubious honor of choosing two people to go up for elimination. We get a long monologue from Tavis about how he doesn’t feel the need to engage in any typical reality-show bullshit, which would honestly be more affecting if this entire show hadn’t been the antithesis of reality-show bullshit from the get-go. However, you can tell that Tavis takes his vow to ignore reality-shenanigans seriously because he manages to talk about his wife and young son without complaining about what a hardship it is to be away from them for even five goddamn minutes.

With a surprising lack of information to go on, since everyone was too busy to focus on what everyone else was doing during this challenge, Tavis picks Abby and Erika: Abby because she’s been coasting for a while (although he doesn’t say that in quite so many words, but you know that’s why), and Erika because he thought her “FREE SKETCH!” sign was confusing. Actually, I don’t know if that’s a valid: we saw Erika explain that she would give away a free sketch to anyone who bought merch, but a sketch alone cost $5. At an actual con, that wouldn’t be confusing, but I realize he just needed to come up with some reason to pick someone else that didn’t seem vindictive.

Graham enlightens everyone that Tavis has just picked the second and third-place contenders in the challenge, respectively. I guess that “FREE SKETCH!” sign wasn’t actually that confusing, amirite? I know there’s some debate among viewers today about whether or not Tavis should have been told everyone’s rankings before making his decision, but I’m not sure; with everyone as close (and honest) as they are, telling him the rankings is the same thing as guaranteeing that the bottom two go up for elimination. I wonder if they might have told him the rankings if he’d asked, though. I could see the merit of only making that information available if the winner specifically asks for it.

NEXT TIME: It’s Abby vs. Erika in the Thunderdome, and while the smart money is on Erika with all her comic experience, I have to admit I’m pulling for Abby here. Don’t get me wrong, Erika’s awesome and all, but she’s already an established comic artist and doesn’t really need this competition; it’s a much bigger deal for Abby. Also, it looks like my curiosity about what they would do if one of the competitors just wasn’t comfortable using a tablet is going to be answered, so hooray for that! And hooray for Mike and Abby having a Tangent-off, hopefully!