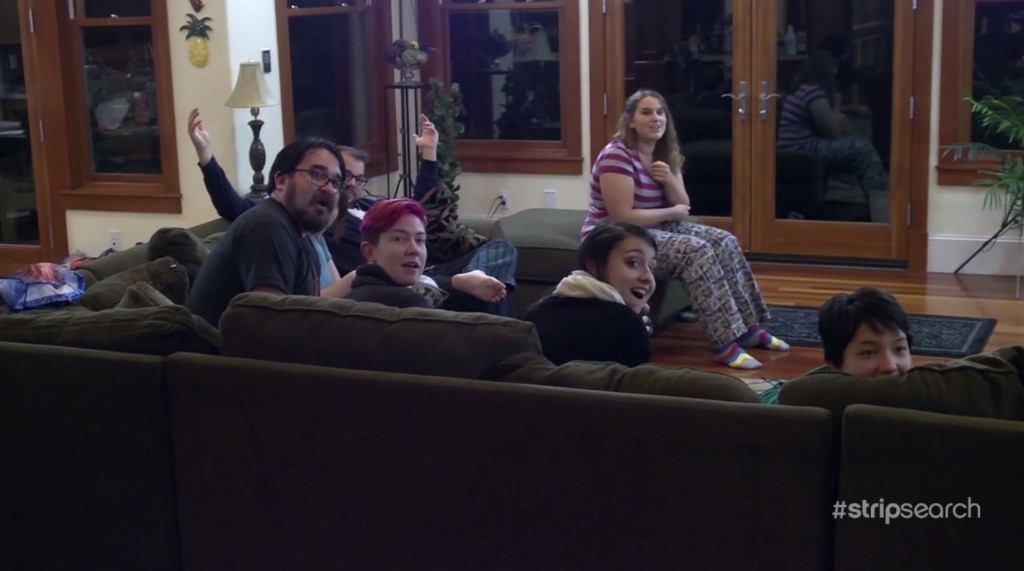 When the door opens, the gang all instantly realizes that a)eliminated contestants are not nearly as eliminated as they thought and b)Monica makes the greatest couch ninja.

In this episode Amy gets real, Lexxy gets reestablished, Maki gets re-pineappled, and Katie kicks ass in the most quiet, unassuming way possible. Meanwhile, Erika continues to impress with the sheer number of clothing items she owns in the exact same shade of pink as her hair. 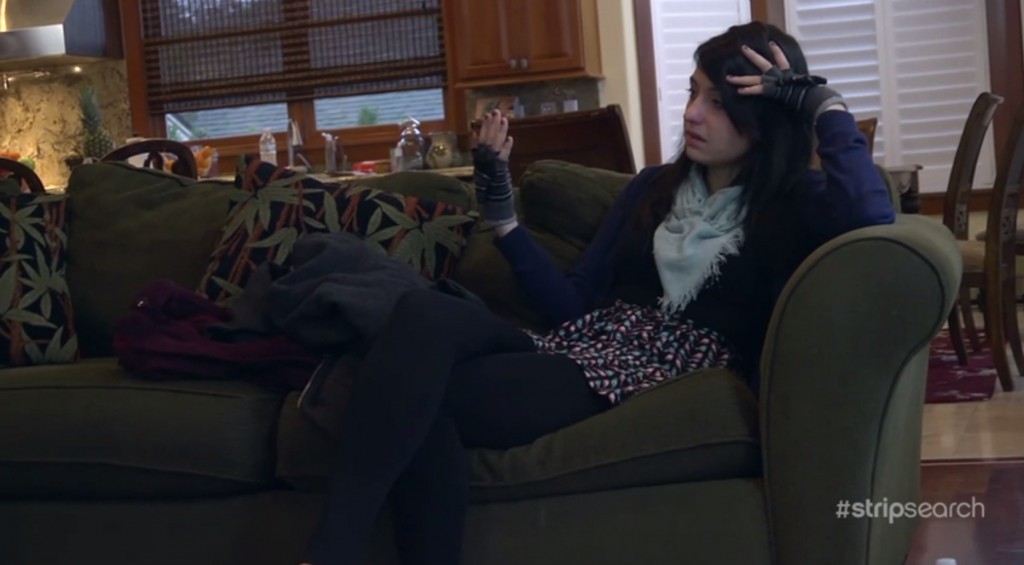 She probably only wears them because it’s a little chilly in the Strip Search house, but for some reason I’m mesmerized by Amy’s fingerless gloves. It’s like she’s Lady Gambit or something.

There were two main components to this episode: the sculpture challenge and Amy’s realization that attempting to game the system, and distancing herself from her fellow competitors as a result, isn’t worthwhile. I’ll get to the sculpting in a minute, but I thought it was great that Amy realized that she was going about the competition the wrong way and had both the perspective to realize it and the strength of character to act on it. A lot of people would have taken Lexxy’s return as an excuse to get angry at the judges (“How dare they break the rules I’m trying so hard to scheme around? Those bastards!”) but instead she saw it for what it was: a sign that it’s the quality of your work that really matters, not your skill in hiding from elimination.

I have this urge to say I’m proud of her, which is terrible and perverse: I hate it when people think they have the right to be proud of people they barely know, or in this case, don’t know at all. Like, Amy’s mom and dad have the right to be proud of her, and maybe even her fellow contestants, depending on how you look at it. A random stranger watching the show? No. So I recognize I have no right to be proud, I’m just pleased that she’s not going to be holding everyone at arm’s length from now on. Reading her comics made me like her, and that makes me want to see her do well.

Moving on, I was really psyched about the sculpture challenge until I heard they had four minutes for each topic. Four minutes? That’s insane. I know these ice-breaker challenges are about loosening up and trying something new, but four minutes to completely sculpt something, even something tiny, just seems beyond stingy to me. I love playing around with Sculpey and it takes me a half an hour to sculpt anything, but I guess it’s possible I’m just lame that way.

That said, some of the artists, especially Katie, did amazing things with the amount of time they were given; I’d love to have seen what they could have done with a respectable amount of time. I was especially impressed with the dog round, where every single artist turned out a cute little clay mutt; they were all super-adorable. 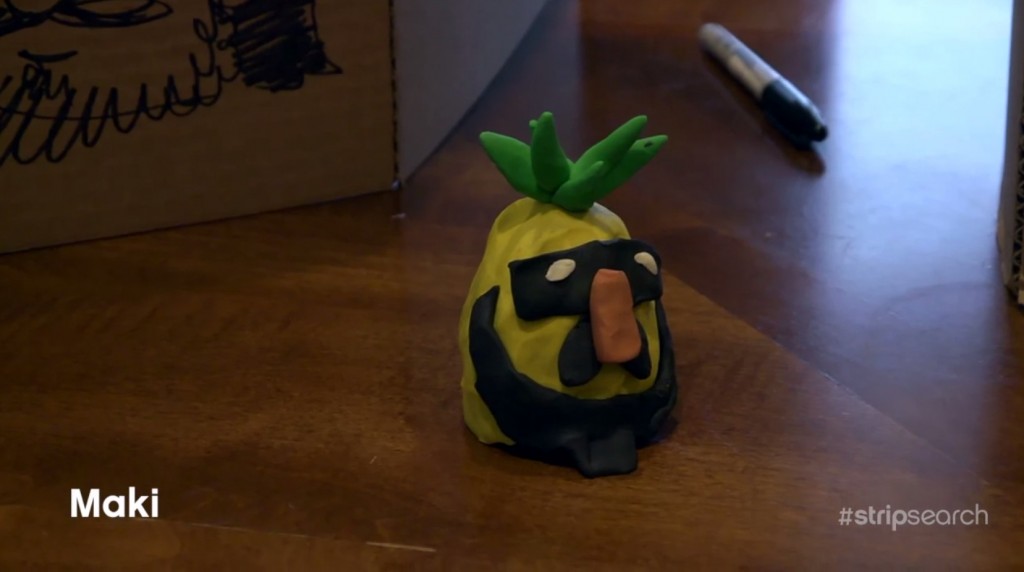 Since I don’t have a whole lot to say about this episode, I thought I’d take a moment to speculate about who might actually win this thing. Lexxy is a phenomenal illustrator, probably the best one there, but I wonder how good a comic artist she is; yes, her elimination strip was good, but it depended mostly on the artwork for its charm. On the other end of the scale, Abby doesn’t seem very accomplished as an illustrator (not surprising considering she’s the youngest artist in the competition), but I checked out her comics and they’re fantastic– I’m keeping up with Junior Scientist Power Hour from now on, Strip Search or no Strip Search. While I doubt Lexxy is going to win this whole thing despite her skills, I think Abby could be a contender– she’s got a really great comic sensibility, and that’s something you either have or you don’t, it can’t be learned. It would also make for a great narrative for the show if Abby won after the judges had basically written her off based on her lack of drawing polish.

In terms of the other contestants, Katie has both the drawing skills and the sense of humor to go all the way, but sometimes she commits to the wrong idea (see: second elimination, skateboard challenge). Twice, we’ve seen her do something where she admitted she had a better idea and didn’t go for it. I don’t know if that’s a lack of confidence, or if I’m just extrapolating too much from two isolated incidents, but that tendency to play it safe could cost her the competition. She definitely has the skill set to win, I just don’t know if she’s hungry for it.

Another one I’ll put in the “could win but probably won’t” category is Erika, because I just don’t think she wants it that much. I did a little research on her and she seems to be quite well established as an indy comics artist– she really doesn’t need to be in the Penny Arcade stable, and if there was any doubt of that, her comment that she would give the prize to Amy if she won confirms it. On the other end of the spectrum, Amy seems to want it the most, but I wonder if her style will be a hard sell for the PA guys– it’s very different from everything at PA, and even though I’m sure they want something different, HOW different is another matter.

Monica’s comics are cute, but I don’t know if she’s ready to win this yet– I get the impression she’s still relatively early in her comics journey. Maybe in three years Monica would smoke the competition, but I would be hugely surprised if she can do it at this stage. That said, her anime focus could be an advantage since there’s a crossover between PA’s gamer audience and anime fans, assuming the judges are taking practical things like that into account. I mean, I don’t know if they’re necessarily looking for a good fit for PA in particular or just said “let’s find the best comic artist and let the chips fall where they may,” but if they’re thinking about the PA brand here, I could much sooner see a comic with anime references fitting into the lineup, as opposed to the more personal journal comics a lot of the contestants specialize in. Crap, I think I just reversed my own position on Monica.

I realize I’ve gotten this far and I haven’t even mentioned the guys! Ah well, for next time I’ll check out some comics by Tavis and Maki and weigh in on them. They’re both kind of flying under the radar right now, more than Amy ever did even when she was trying to.

Next time: Abby thinks she’s out of the competition. I don’t believe it for a second, lying preview. Liar Liar, Pants on Pineapple Fire.