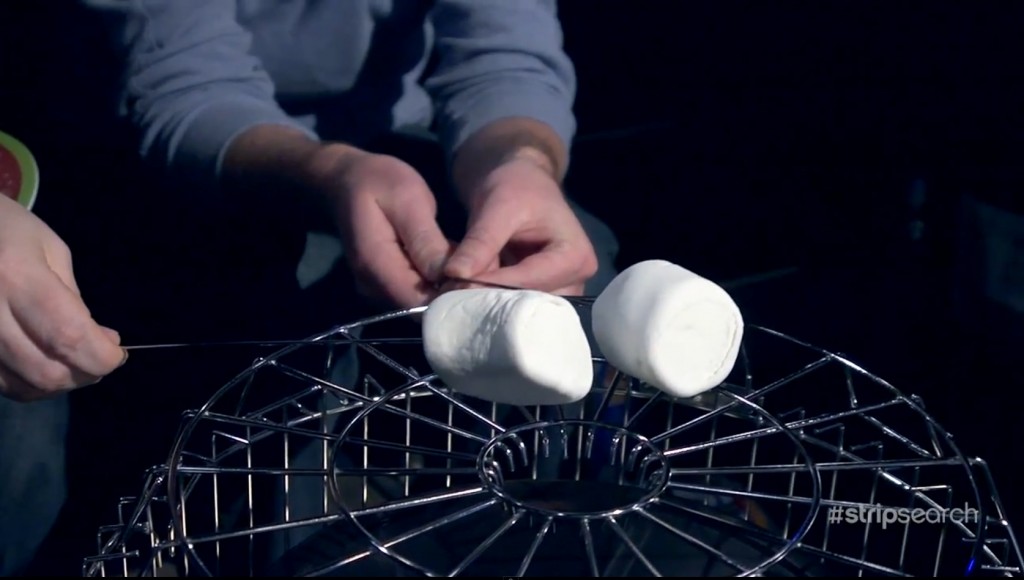 This episode, the fourth elimination, had a surprise, cliffhanger-ish ending that divided the fandom. More important for our purposes here, I tried to draw my own comic strip based on the elimination challenge and thoroughly embarrassed myself, but hopefully in a funny way? 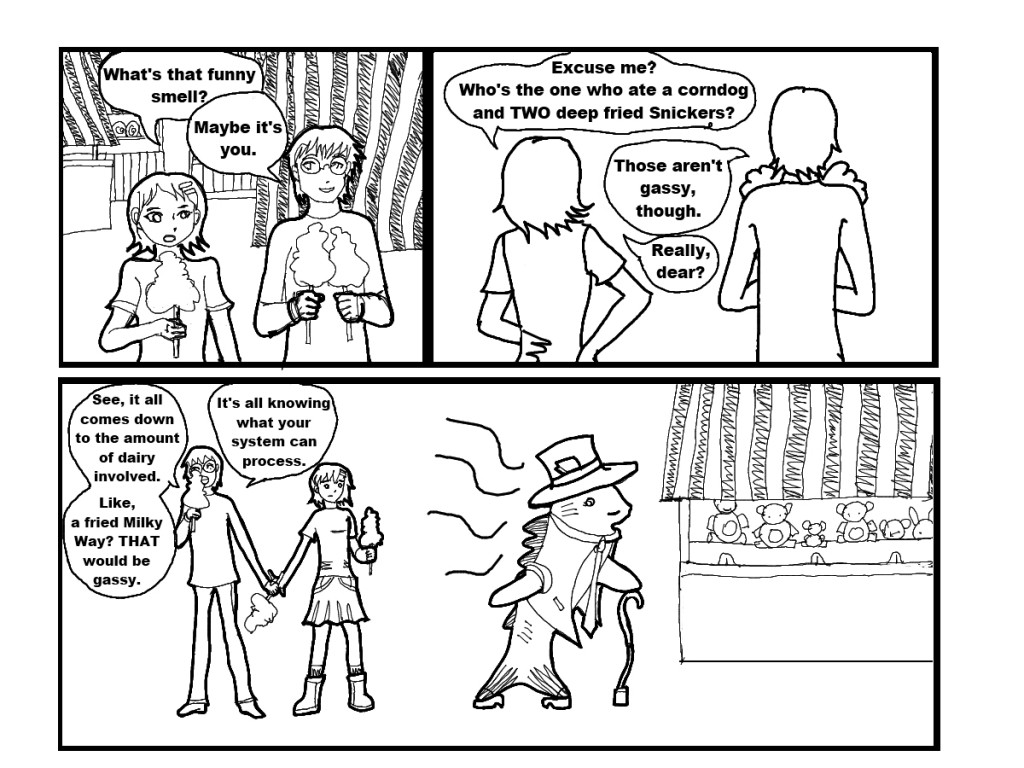 Okay, so here’s my contribution, based on the same prompts Nick and Mac had “flatulence” and “county fair.” I didn’t limit myself to 90 minutes, for several reasons:

1. I’m getting back into drawing for the first time in ages, whereas the competitors draw all the time; I think a handicap is not out of the question.

2. This was my first time EVER drawing all-digital on a tablet.

I also didn’t stop the video in the middle and draw the strip before finishing, which would be the true purist’s way to do it– that said, I had already come up with my idea before I knew what either Nick or Mac were drawing, so it’s not like I was inspired by their strips. I also stopped after about 2 hours because I didn’t want to stretch the time THAT much, hence no color.

Anyway, needless to say, this gives me a new appreciation for the constraints the contestants have to work under during the elimination rounds. Even stretching the time limit, I’m not happy with what I put out; I think this strip basically tells the joke (for what it’s worth), but it looked 20x better in my head. If I were competing, the best Mike and Jerry would probably be able to say to me would be “you need a lot more time,”– although, to be fair, that’s pretty much what they say to everyone.

My artistic failures out of the way, this was an interesting episode. I know some people have gone nuts over the fact that the judges “broke the rules” by sending both artists home and calling back Lexxy (who I like so much I’ll even spell her name properly this time!), but I don’t think it matters much even if they have. Bringing back eliminated contestants to ameliorate the sometimes bizarre and unfair results of situational judging has become a reality show staple. Heck, the winner of the latest season of Top Chef, Kristin Kish, was actually eliminated once.

In addition to mixing things up, it let’s the contestants know that they can’t afford to just barely do better than their competitor in an elimination round: they have to do well. Other than the fact that that’s a lot of pressure, I think it’s a good thing for the show overall. I don’t think any viewer likes the “well, you sucked LESS, so we guess we’ll keep you,” ending.

Last point: when Mike asked Nick why alliances weren’t forming in the house, I half-expected Nick to say “Because we’re above that typical reality-show bullshit, Mr. Krahulik sir.” However, when I thought about it, I realized something interesting: artists, by which I mean genuine artists (not the sunglasses-and-beret, trying-to-sell-a-minimalist-tin-foil-sculpture-for-$4- million-on-hype variety), have little need for that kind of gamesmanship. What these people all really want is for someone who’s in a position to know (in this case Mike and Jerry) to say “You’re the real deal: a lot of people like to call themselves artists, but you can really do this thing.” Everything other than that is icing on the cake. And if that’s what you want, you have zero incentive to chip away at the integrity of the competition; you want to know that it’s real. That you really were the best.

So maybe it’s less a case of “gee, everybody on Strip Search is really nice,” (which they are), but more about how artists have much less need of the kind of scheming, backstabbing stuff that actually forms the backbone of reality television. That doesn’t make it an anti-reality show, per se, but it’s definitely coming at the whole thing from a different angle, and I think that’s kinda neat.