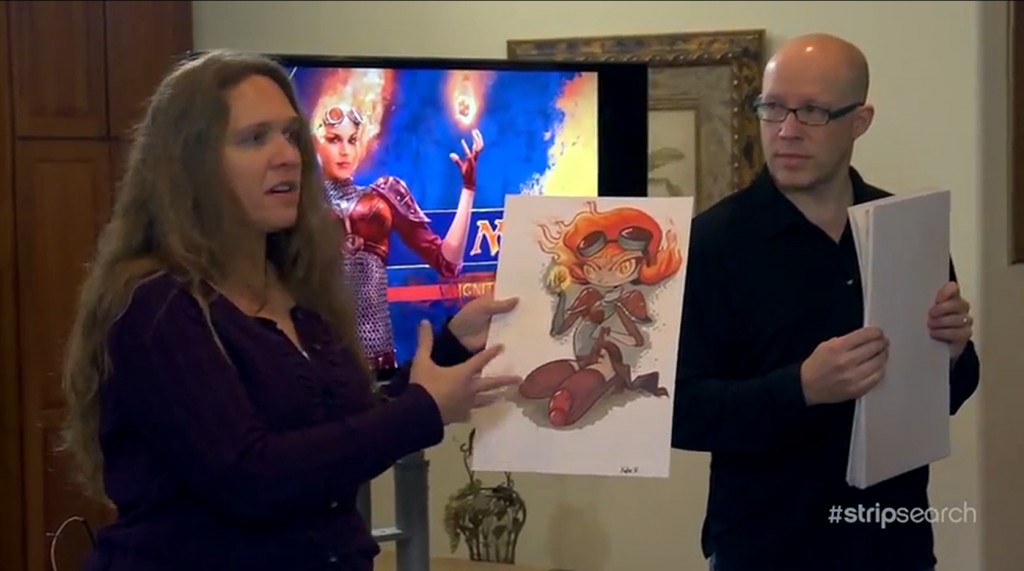 While I can see why the WoTC people went with the design they did, I really liked Katie’s “sexy” design. It really took the character in a different direction, which was something I think a lot of the artists were afraid to do.

While Graham disappointed me by not donning his gas mask at any point, this was a great 20 minutes of art-entertainment. The “Design a Skateboard Based on this Character” challenge was fun, and it even featured that watching-people-draw-over-the-shoulder stuff viewers have been clamoring for (no seriously, apparently they have.) Personally, I only just learned how to play Magic:The Gathering a few months ago, so I wasn’t over the moon with excitement about the Wizards of The Coast cross-promotion, but dedicated Magic fans probably had to retire to their fainting couches about three minutes into this episode. 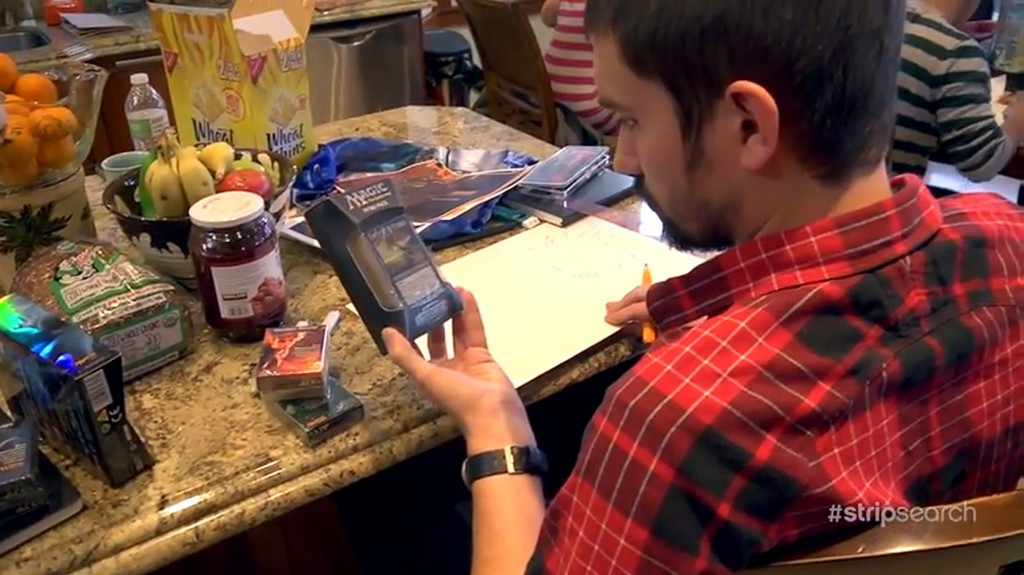 This was the closest we’ve seen to a pure drawing challenge, so we really got to see everyone’s styles, some for the first time. I really couldn’t have told you what Monica’s art was like before this episode, but after seeing the dynamic image she produced, I want to see more. While I wasn’t as impressed with Abby’s piece, I did like how she seems to be able to pull off quite a few different styles, something we hadn’t seen a hint of before this. I have a feeling she may shock the hell out of Mike if and when she gets put up for elimination, since he’s basically written her off based on her self-portrait.

Just like the T-shirt challenge, winning and losing was determined in large part by who could make a strong graphic, as opposed to a strong drawing. I think that’s a lot of what separates the goods from the greats in webcomics: You can draw the prettiest picture in the world, if it’s not clean or it doesn’t work as a panel (or a T-shirt, or a pin, etc.), you’ve failed as a webcartoonist. There are always exceptions, but in general, I think the artists that succeed are those that skew closer to a graphic designers in their thinking than pure illustrators. 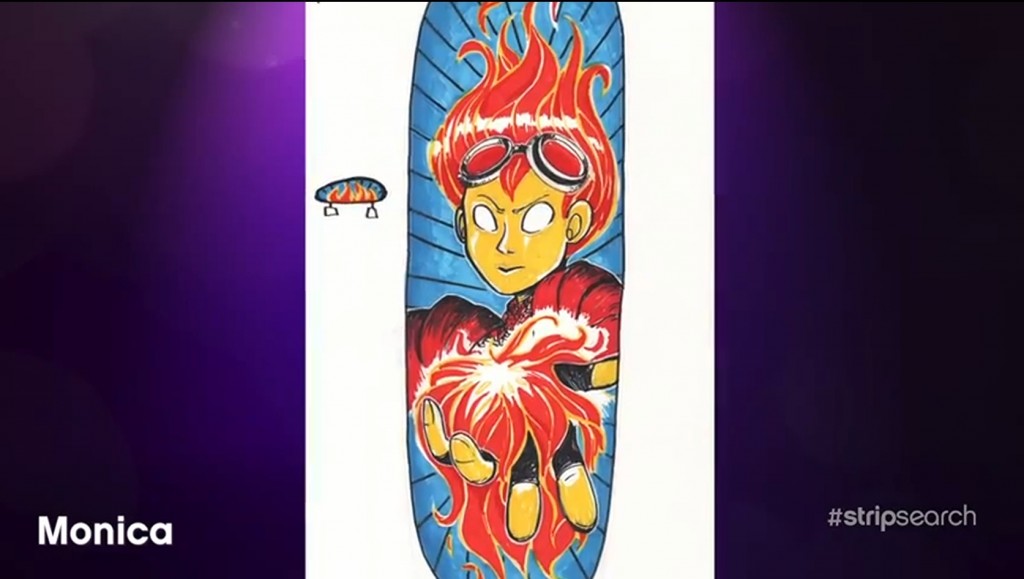 Another strong graphic, courtesy of Monica. I think she learned a lot from the T-shirt challenge.

In other news, this was the first time Amy’s “flying under the radar,” strategy really made me raise an eyebrow. Gal, do you really prefer not to have the folks from WoTC say something nice about your work? I would imagine that whether you win Strip Search or not, getting feedback from someone in a position to give you fantastic freelance assignments would be a good thing. I understand not wanting to stick out for the sake of avoiding elimination, but she could be winning the battle and losing the war.

Though there can only be one official winner, everyone on this show stands to gain fans, and possibly professional contacts; ultimately, everyone can “win” if they play their cards right. I think Amy may be too focused on the game aspect to see that, although I don’t know; maybe she just really wants to work at the PA offices. I could understand that.

It was interesting that Erika made a point of making her image non-sexual and won, while Katie’s was out of consideration for being “too sexy.” Now, I see where WoTC is going here; they don’t want to alienate female players. They don’t want angry blog posts about how their products sexualize women, even if they’ve gotten away with sexy art in the past; it’s just not worth it. But rejecting Katie’s art on that basis makes me wonder if maybe we all aren’t getting hyper-sensitive to that sort of thing, because her piece really wasn’t objectionable in my opinion. I mean, I just wonder if having a zero-tolerance policy on sexy art is really the way a brand like Magic, in particular, should be handled. Food for thought that goes beyond this episode, I suppose.

EDIT: Actually, I just looked at the image again and saw how high the slit in Chandra’s skirt is. Err, okay, maybe it was a tiny bit objectionable. But my point still stands, maybe?

This was the first elimination challenge to end without letting us know who was selected to “draw for their lives” in front of Mike and Jerry, so we can’t place bets on who will win Friday’s comic-off (awwww.) Since for the most part, contestants have actually been picking who does the worst on the last challenge to go up for elimination, I’m betting that Mac will be one of Erika’s picks; neither his design nor his (lack of) color choice worked for a skateboard. The second one is a toss-up; I think Maki and Monica are safe, but that’s all I’ll venture.

Next time: Is there a more difficult combination than “circus” and “areola”? Mike seems to think so.