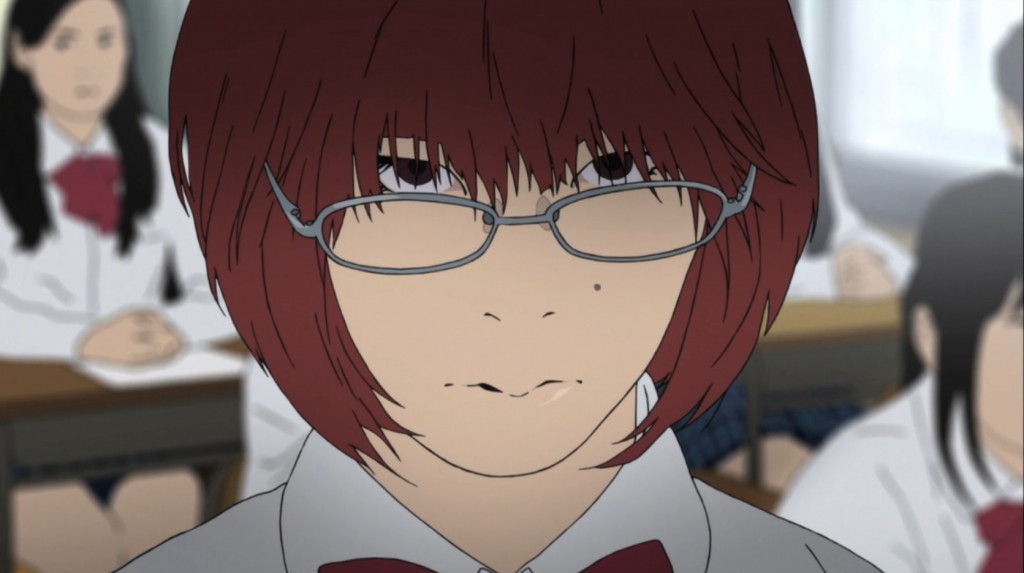 If you have that friend that constantly asks, “Why don’t anime characters ever look Japanese?”, give them this show. Keep in mind, chances are good that they will no longer be your friend. 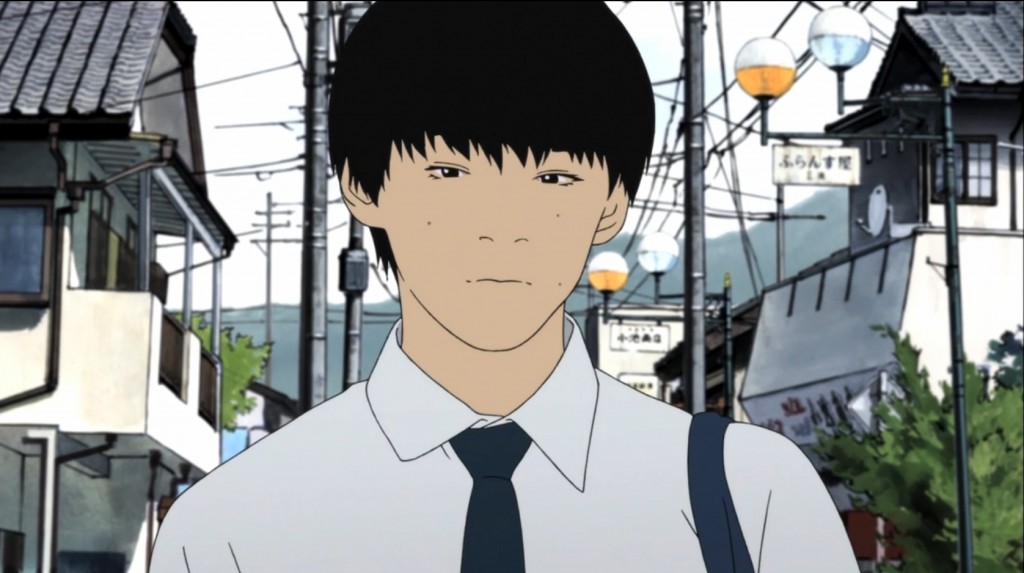 Alternate Title Suggestions: For The Love Of God Someone Do Something Already, Oh God Make It Stop

I have really mixed feelings about Flowers of Evil. I think it’s tremendously successful at what it sets out to do, which is create a painfully realistic world and use it as a venue for introducing an overwhelmingly powerful sense of dread, the sense that the world is an evil place an anything could happen at anytime. I’m just not sure if what it sets out to do is something I want to watch.

I know the “realistic” animation style has been the major bone of contention thus far, but it wasn’t an issue for me. I don’t like it, exactly, but I do think it suits and enhances the dark mood the series is going for far better than a more traditional anime style would. As to whether or not the rotoscoping (or basing the animation on live action footage) could have been done more smoothly, I’m not sure. I think the disjointed nature of the footage may be, if not intentional, at the very least, a happy accident. In short, whatever criticisms you can level against the show’s visuals (and there are a lot), I think they’re perfectly suited to the kind of slow, psycho-horror that hits just a little too close to home.

The majority of the first episode is spent with the audience waiting for something, ANYTHING to happen. Normally that would be a criticism that the show is boring, but I don’t think it is; it’s all about building a nail-biting sense of anticipation, to the point where you’re almost begging for something to break the tension already. When the strange-looking Nakamura finally insults the teacher, it’s like a breath of fresh air to a viewer who feels like they’ve been suffocating underwater. It’s a rare show that can set the mood that effectively that the sheer lack of anything happening is emotionally affecting, and I applaud Flowers of Evil for that.

The thing is, I am downright scared of this show. I feel like anything could happen, and when it does it’s probably going to be something ungodly horrible that I can only watch through my fingers. Actually, based on episode one, here’s what I predict will happen (and I’ve never read the manga): Nakamura will encourage Literature Boy to rape and murder Nanako, his crush. He will end up brutally dismembering her body with a No. 2 pencil while murmuring passages from his favorite French existentialists to himself.

Then he’ll wake up the next morning, and the viewers will be all like “Thank God! It was just a dream, none of that really happened.” Then he’ll trip over like, her broken shinbone or something, and we’ll realize that yes, he really did just rape and brutally murder her. And then it will get all like the last 20 minutes of Perfect Blue, and we won’t know if he murdered her, if it was a dream-within-a-dream, or if he murdered Nakamura instead, or if he killed himself and the whole thing is being viewed from the perspective of his soul being tormented in hell. Then the Flower will put on a top hat and a monocle and dance to early-90s era Nine Inch Nails instrumentals, and we’ll all be shipped off to mental institutions, forced to watch Smile! Pretty Cure on indefinite loop to drown out the screaming.

I really don’t want to watch the next episode, but I probably will out of irresistible, morbid curiosity. As an artistic statement, it’s in a league of it’s own, but honestly? Right now I kind of wish it didn’t exist. Is that a guarded recommendation, a condemnation, or something else entirely? I have no idea. I have no idea if I recommend this show or not. I will be watching under duress.