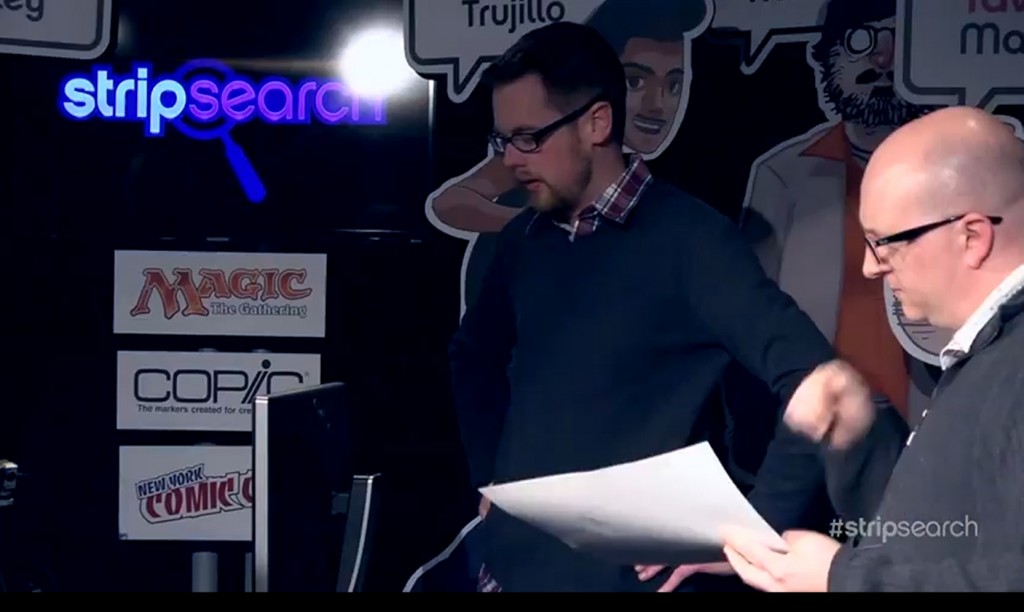 A screen from episode 10. You can’t tell from this still, but Mike Krahulik is freaking out just a little bit because he might have to eliminate someone based on her Twitter habits, for some strange reason.

I was thinking of recapping Strip Search (the online reality show for webcomic artists presented by Penny Arcade), then right around the time the first episode was posted, Otakusphere went down for weeks. Now it’s up to episode 10. Oh well, better late than never.

I’ve been interested in the show for some time, because I actually listened to the episode of the old PA podcast where Mike first pitched the idea of a “cartoonist reality show,” years ago. I remember thinking at the time ‘That probably won’t happen, but it would be pretty awesome if it did.'” So I guess I’m one of the few people who can be said to have “eagerly anticipated” Strip Search, since I was one of the select group of PA fans who knew it might become a thing before it  existed.

Was it worth the wait? Mostly, yes. Granted, I found the first episode incredibly dull since all they did was introduce the contestants (who were all so busy trying to be nice and unobjectionable that no one stood out), but since then it’s been fun. The elimination challenges, where the artists have to create a comic strip based on two randomly-selected ideas, is structured just the way I would set it up: Make them draw some good comics, period. I can find things to criticize, but the issues with the show are really problems with the reality-show format in general.

The main issue, which Mike was grappling with in the most recent episode, is that the way these contests work virtually guarantees that some of the most promising contenders get eliminated earlier than they should. If the contest was based solely on writing and drawing, Lexxy probably would have stuck around quite a bit longer. But a show filled entirely with comic-making challenges would be dull (well, *I* would watch it, but that’s me), so they have to mix it up for the sake of maintaining a certain minimum level of entertainment value– leading to silly things like blitzkrieg T-shirt design-offs.

Basically PA had two options: make the show hardcore comic strip-focused, and lose much of the reality show audience that the program has the potential to attract, or throw in some semi-arbitrary challenges that make for better TV and end up with someone getting put up for elimination due to what was basically an ideological disagreement about how to best use Twitter. 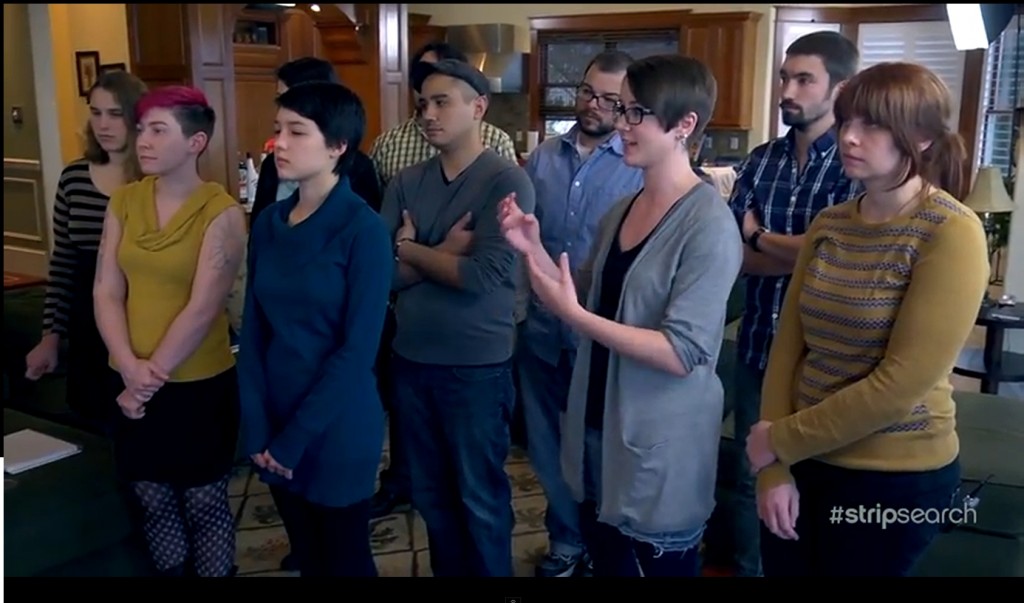 The final 10: I’m tempted to put in some kind of snarky caption, but they all seem like really nice people and I’d rather not burn in hell.

For the record, I think both Scott Kurtz and Lexxy were right in a way; some people really shouldn’t ask their fans for feedback over Twitter (or anywhere) because they’ll lose sight of their vision, while others can solicit all the feedback they want, confident that they don’t necessarily have to listen to any of it. I know the issue for the contestants was that they felt like they were listening to a Lexxy-filibuster, but to be fair to her, having Scott present the opposing viewpoint as a judge was sending a message: “this is what we experienced webcomic artists believe.” She got carried away perhaps, but I can understand wanting to point out that no, Scott’s way is not the One True Way to interact on Twitter.

Anyway, I suppose that’s enough on the Twitter-elimination debacle. Some other notes on the show in general, since I didn’t have the opportunity to post about the earlier episodes.

I’ll be back to review/recap/whatever Strip Search 11 which, hopefully, will not be about Twitter in the slightest.