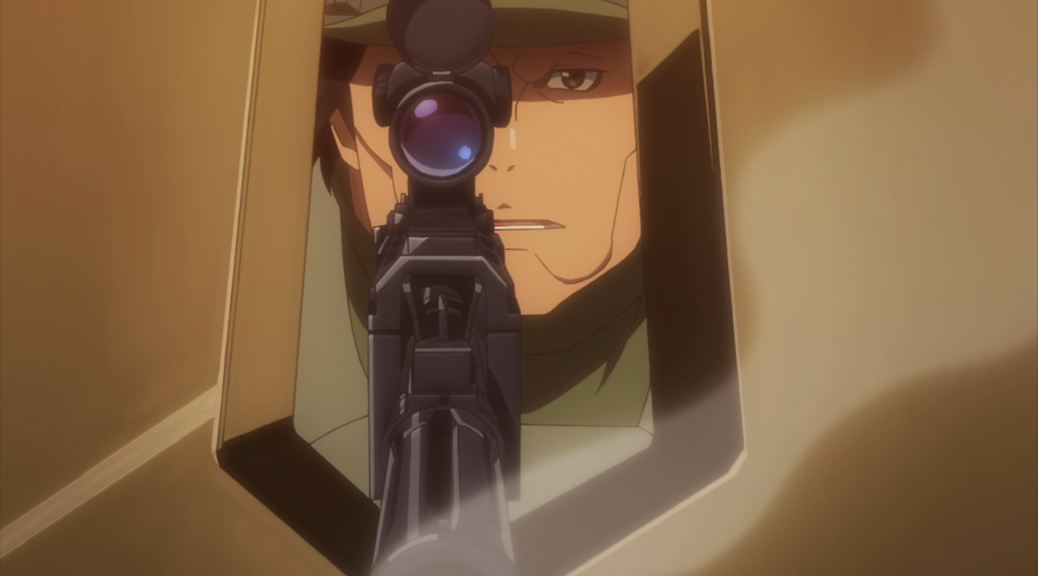 It’s just as well that I’m doubling up on these episodes, because I don’t have a whole lot to say about these two. The action was quite entertaining, but there’s a limit to the amount of times I can say “LLENN is really fast and agile and it looks cool.” Come to think of it, LLENN is so fast that if this GGO thing ever starts to get old, she could consider racing the horse girls on the track in Uma Musume. I even hear that a spot may be opening up….

Episode 5: Real Guns Are Not A Joke 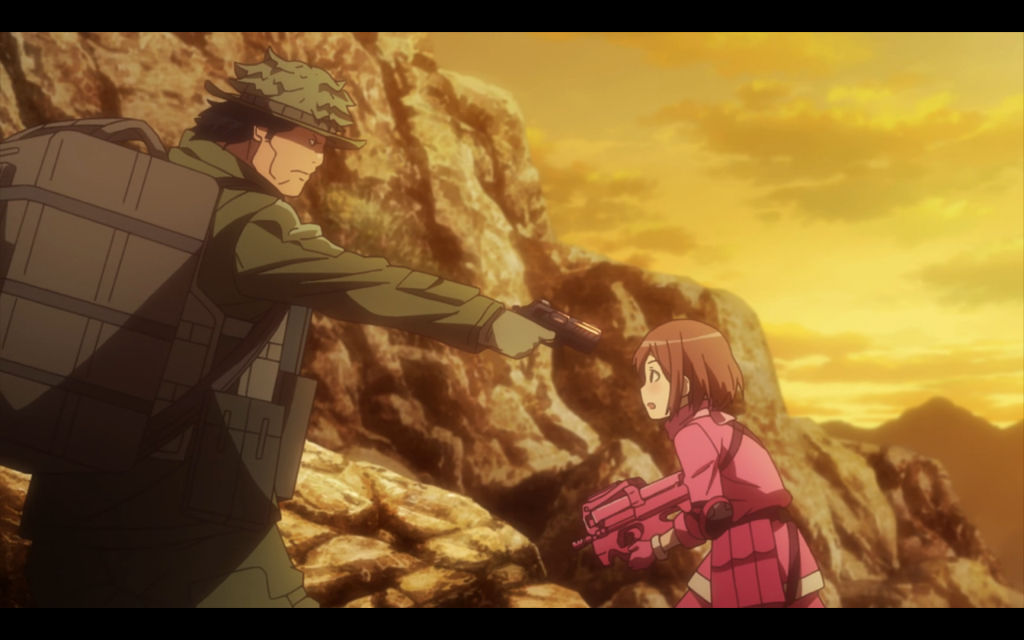 This episode touched on something that doesn’t get mentioned often, and I’m really glad that it did. I’m not really into shooting, but I did spend some time at the rifle range as a teenager and have some idea how real shooting works. I’ve also played video games where you shoot a gun, and it’s very different from the real thing. I assume, as games have gotten more realistic, some have added targeting mechanics that are more akin to real shooting, but in general, real life shooting and in-game shooting don’t have a whole lot in common.

Since GGO is fully virtual reality, the game could emulate real shooting accurately, but this episode goes into why the game designers deliberately chose not to do that. Still, because the option for manual targeting exists, someone like M– who obviously has quite a bit of real life experience– can smoke the competition, because he can bypass all of the bells and whistles that were put in to make the game more competitive.

I just appreciate this acknowledgement, both that real-life shooting and game shooting are different (and probably will continue to be different in the future), and that developing good marksmanship in real life is time-consuming and difficult. Too many people labor under the illusion that a few hours playing a first-person shooter can turn someone into the equivalent of a deadly mercenary, and that’s just not how it works.

All that is overshadowed by a twist ending though, when M turns on LLENN and nearly kills her in-game. At the time, I thought M had just been told (or perhaps lied to) that the SAO-style “if you die in the game, you die in real life” rules were back in effect, and he had panicked. This led me to wonder if M is an SAO survivor, which– considering his military experience– seems like pretty bad luck. I mean, how cursed do you have to be that you have people shooting at you for a living, then when you go to play video games on your day off, you’re stuck in some deranged programmer’s murder fantasy?

You can shoot at LLENN, kick her, try to blow her up with a plasma grenade; but when you hurt her gun, that’s when she has just HAD IT with you and your crap.

Fortunately, the show went a less predictable route. Instead of the Death Game rules being reinstated, M is just afraid that Pito will kill him, because apparently that there bitch be crazy. The way he talks about it though, it sounds like either Pito is an SAO survivor, or simply obsessed with the SAO event. I think it’s important to remember that even though we’re not dealing with the SAO game anymore, the whole SAO Death Game tragedy is a major historical event in this world, and the repercussions from that are still being felt. I know people who have limited tolerance for this franchise want SAO Alternative to distance itself as much from its predecessor as possible, but I think that’s misguided; that history is important.

This episode then features a bizarre sequence where either a stressed-out LLENN hallucinates her gun, P-chan, talking to her, OR P-chan achieves sentience. I’m 99% sure it’s supposed to be the first scenario and meant as comic relief, but part of me is hoping the guns in GGO are becoming sentient AI because that would be batshit insane and I kind of dig it. It would also be a lot like the Tachikomas in Ghost in the Shell, further proving my theory that SAO and it’s spinoffs are all really GITS: Junior. 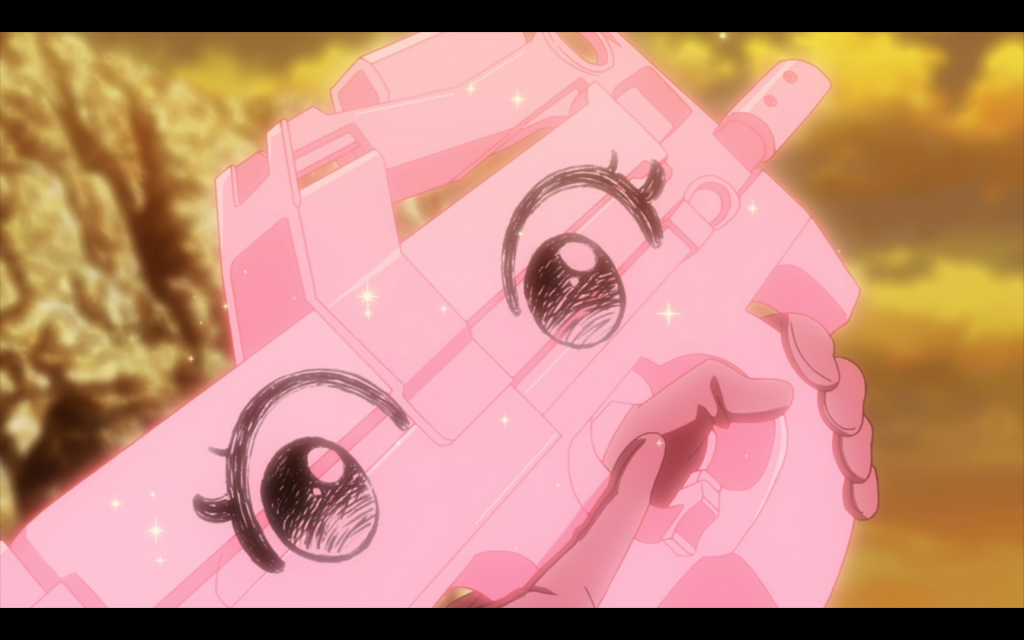 I get a weird Pink Elephants on Parade vibe from LLENN talking to her pink gun while the gun bats it’s eyelashes at her. That’s cool though, I love Dumbo. Underrated masterpiece, that film.

In the climax of Squad Jam, LLENN takes on a squad full of Amazon-like soldier women, using Kirito-like skills to edge out a victory while outnumbered. I wonder if the people who claim to like this show because LLENN is not Kirito are now saying “Dammit, LLENN is just like Kirito, screw this show!”, or if LLENN’s badassery makes Kirito less egregious, because he’s less special if other people have the same skills? Whatever.

At the end of Squad Jam, Karen seems to have come to terms with her height, which is…a little forced, but I’ll accept it. I can see how being in that kind of adrenalin-pumping situation would force someone to reevaluate their priorities a little bit. What’s awesome is that the team she was playing against turns out to be the same group of cute girls she’s been walking past every episode, which means that the girls are using GGO to deal with their height the same way Karen is. Apparently, no one smokes the competition in the FPS games of the future like girls with serious body image issues. 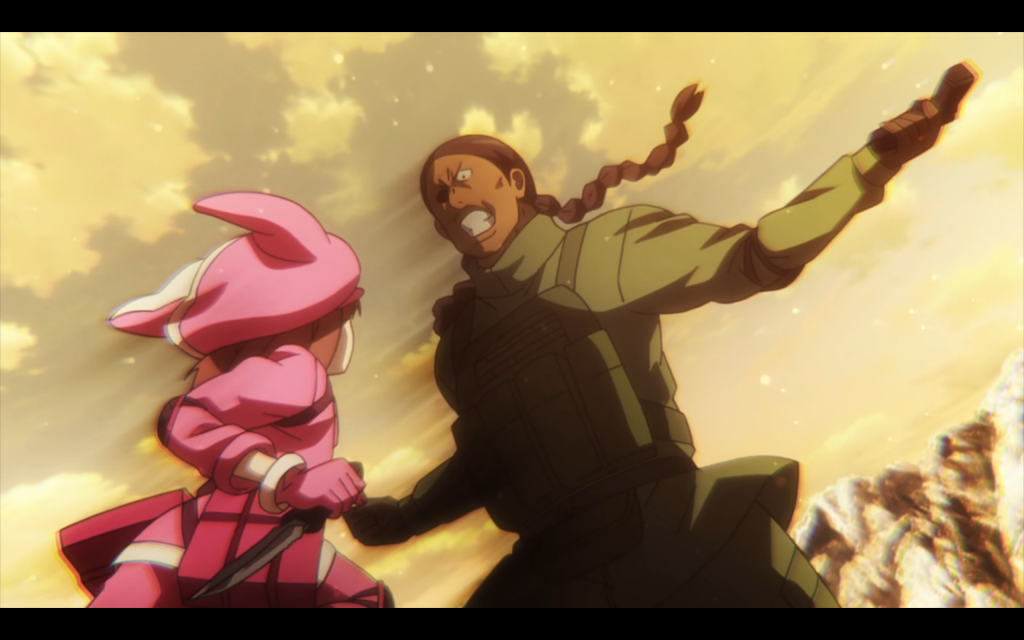 Seriously though, it’s pretty cool that the final battle of this big tournament came down to LLENN, who isn’t meant to be sexy at all, versus a bunch of bulky warrior women who also weren’t portrayed as sexy. In terms of representation, this is a pretty rare thing for anime (and in general), but because this is SAO, the franchise that must be slammed for misogyny at every turn, expect the series to get absolutely zero credit for doing this.

Well, that was all fun, but I can’t say I’m super-excited to see next week’s episode. If the big question left looming is “Is Pito actually super-duper insane?”, then that’s a problem, since I still don’t care about Pito. However, this show has been competent enough that I pretty much trust them to keep my interest moving forward, however they end up doing it.