I didn’t quite get this episode, honestly. I understand that setting up a merch table properly at a con is important for an artist, but I had no idea there were so many little nuances, and I’m still not sure I understood what the judges were talking about. Whenever they started going on about “verticality” or certain combinations of books vs. prints looking “inviting,” I kind of lost the plot a little there. I guess this is why I am not Penny Arcade Mastermind Robert Khoo. 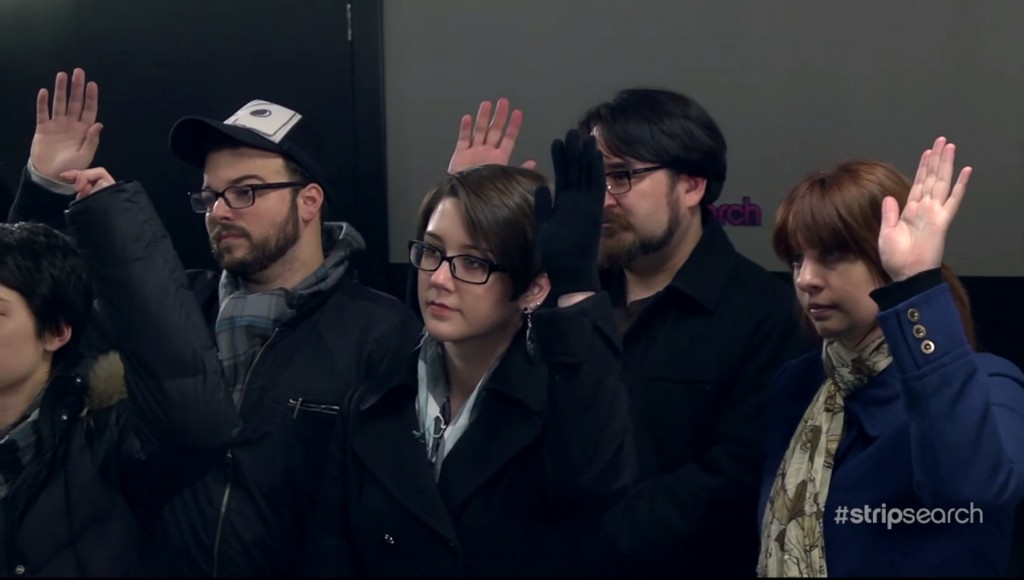 “Should you win this competition, Robert Khoo will be your new boss. If this fact fills you with mortal terror, please raise your hand.”

The episode starts off with Graham (still sans-gas mask) telling the contestants to pack their bags, because one person won’t be coming home from their next field trip. I have to wonder if anyone actually had to pack or if everyone is living out of their suitcase at this point. I mean, I doubt Katie has bothered unpacking since the second time she was put up for elimination, Lexxy hasn’t even had time to unpack from moving back in, and Abby constantly packs everything in a panic just in case; that’s like, half the contestant pool right there.

Now Amy might leave her clothes and several pairs of gloves scattered all over the house in a ploy to psyche out the competition (“You think I care about packing up this shit? I’m NEVER gonna have to pack this shit, this is my house bitches”), but that’s something old “TeamScheme” Amy would do; this is New Amy.

The venue for the next challenge is an empty room in the back of a card store, where our heroes(?) find out they’ll be setting up booths for an imaginary Strip Search Convention; you just know that if Penny Arcade can swing it, this absolutely will happen for real, and it will be called StripCon. Contestants express various levels of dread at the prospect of setting up their own booths, except for Erika, who has been exhibiting at cons for over a decade and is basically the imperial crown princess of booth setup. I think the judges resisted giving her the win because she’s a ringer.

Amy freely admits she’s looking at what everyone else is doing and appropriating their ideas, since she’s never done a con before. Erika says in a confessional that she doesn’t mind Amy borrowing her ideas, but Amy and Erika are so ridiculously in love at this point, I’m not sure what Amy could do that would legitimately bother Erika. “Yeah, Amy kind of whacked me over the head with a 24″ Wacom Cintiq to knock me out, but I know it’s just because she really wants to move to Seattle. She deserves to win.”

Abby starts off confident, then starts to freak out when she realizes everyone else’s table looks different from hers, and it’s honestly kind of hard to watch. You just want to reach through the screen, give her a hug and tell her you’re going to buy all her merch. Lexxy also has trouble, but for a different reason: as an illustrator, she only deals with prints and now she has shirts and stickers and action figures and whatnot to arrange on her table. When I first saw this episode I thought that was a kind of silly thing to say (really? The different merch threw you that much?) but the more I think about it, the more it makes sense. She also has issues with time management, because duh, it’s Lexxy.

Judges Robert Khoo and Brian Sunter assess the booths, starting with Tavis’. They like Tavis’ vertical wall display, but Sunter says that with a lack of pricing or any information on the wall, there’s no “call to action,” which is when I started to get the idea that maybe setting up booths at cons is a little more complicated than I had thought. Lexxy gets some points when Khoo remarks that even though he doesn’t like price menus as a general rule, he doesn’t mind hers because it allowed for a very clean set up. Her booth actually looks unfinished to me, but Khoo is the expert so I have to take his word for it.

Katie gets kudos (Khoodos?) for her great signage, while Maki gets dinged for his substandard signage, which Khoo calls out as “something you would see at a church bazaar.” Ouch, I think– I’ve never been to a church bazaar so I wouldn’t know. Amy also gets criticized for a messy price menu and a general lack of signs, but she gets brownie points for putting the high-profit margin right in front, which is just SO AMY. She’s also the only one who displays the “I’m going on the Internet to find people who agree with me” hoodie in accordance with Khoo’s preference; I can’t believe how much nitty-gritty the judges are getting into here.

They then look at Erika’s table and realize how similar it is to Amy’s table, but fortunately, Khoo was paying attention during the challenge and knows that it was Amy who stole from Erika, not the other way around. We get a split-screen meant to show us just how big a copycat Amy supposedly was, but honestly, I don’t think it’s that damning. Other than the two PA books being in the same position, the two tables are set up differently. It’s bound to look similar when so much of the merch is the same, right? Check the screen and judge for yourself: 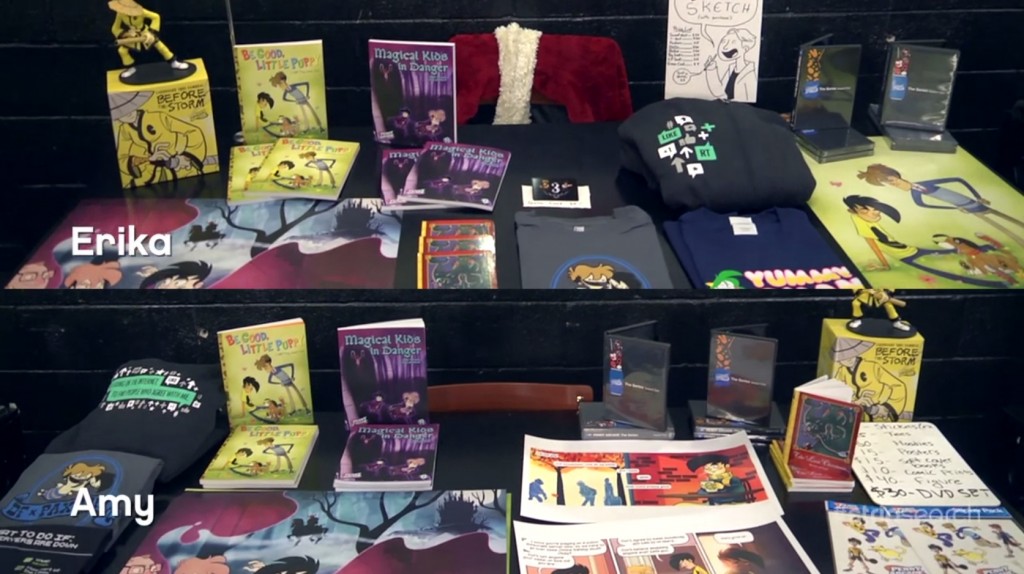 Monica gets high marks for using every single product while still making a booth that looks inviting, symmetrical and not cluttered. Unlike Tavis, she also does the wall posters right by putting price signs on them. Finally, the twosome gets to Abby’s table. They know she was upset during the challenge, but Khoo- bless him- finds a lot to like at her table. Granted, her signage kind of sucks, but she can join the club there, and it’s still better than Maki’s “church bazaar” signs. Plus, she uses the metal stands to prop up the books, something no one at PA Megacorp has ever thought of doing. Really, guys? I know it’s easy to be on the outside looking in and say “wow, that’s obvious,” but…wow, that’s obvious. Still, Khoo’s over-the-top reaction to Abby’s genius move with the books is hilarious.

As an aside, I was really impressed by how Khoo treated the artists in this episode; while he’s always come off as basically a nice person on PATV, I’ve always gotten the impression he has very little patience for weakness. Like, if you brought your art up to Khoo at a convention, he strikes me as the kind of person who’d say “this sucks, you need to draw more,” rather than spend time telling you where you need to improve. And there isn’t necessarily anything wrong with that, but it was still nice to see him be compassionate towards Abby in particular because of how nervous she was.

Anyway, Khoo lets everybody know how they did, but interestingly, he only focuses on the positive; whether we just didn’t see the negative critiques, or he deliberately held back on them is an interesting question, because there definitely were some negative things to be said. Monica is deemed the overall winner, at which point she says “Fuck, I won! What’s going on?” in a tiny little leprechaun voice and it’s kind of adorable. Everybody talks about how happy they are for Monica, and because this is Strip Search and not any other reality show, you can tell they are actually, genuinely happy for her and not just playing to the cameras. Of course, that means she needs to put up two people for elimination, which sucks– because, as Katie points out, at this point in the competition there really isn’t an obvious loser for these challenges.

Abby starts to cry and hopes that Monica didn’t dislike her booth, and guys, I can’t take it. Abby crying is just the most heart-wrenching thing, like HOW DARE YOU, Strip Search. How dare you. #TeamTangent forever. Anyway, Monica also cries, which is also kind of rough but I can deal, and she puts forward Amy and Maki based on the general dullness of their respective booths.

Next Time: Amy and Maki have a comic-off, and the preview is edited in such a way to make it seem like Tycho is saying complimentary things about Maki, but I’m pretty sure he’s actually saying them about Amy. Presumably, people will now stop saying “signage” every other minute, but you never know.